The battle of the hybrid compact crossovers is on 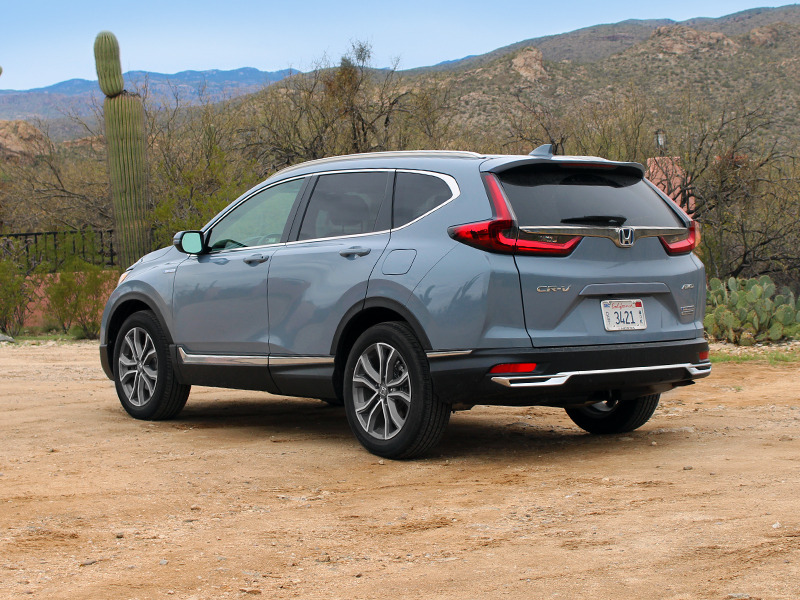 We traveled to Tucson, Arizona to put the CR-V's new hybrid engine to the test.

The Honda CR-V has been a longtime favorite compact crossover among small families. We have a theory as to why, and it involves a flashback to our high school days. The CR-V was not voted 'class jock' with the sportiest driving dynamics, or 'future rock star' with cutting edge style. Instead, the CR-V is the friend you've known since kindergarten. The friend who showed up for every single one of your birthday parties, and even did your homework at a moment's notice. 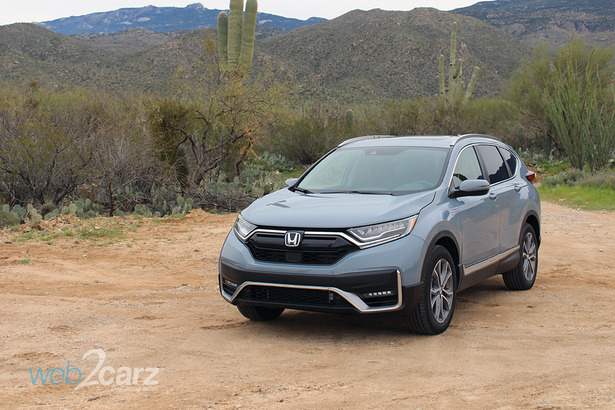 The 2020 CR-V Hybrid is as practical in the desert as it is in the city.

Everything about the CR-V, from its smooth ride, huge cargo space, and the comfortable cabin screams practical and dependable. That's why adding a hybrid CR-V model to the lineup was a natural next step for Honda to make the CR-V even more refined and efficient. How does the new CR-V Hybrid perform compared to the petrol models and the competition from other brands? We joined the Honda team in the desert of Tucson, Arizona to put it to the test. 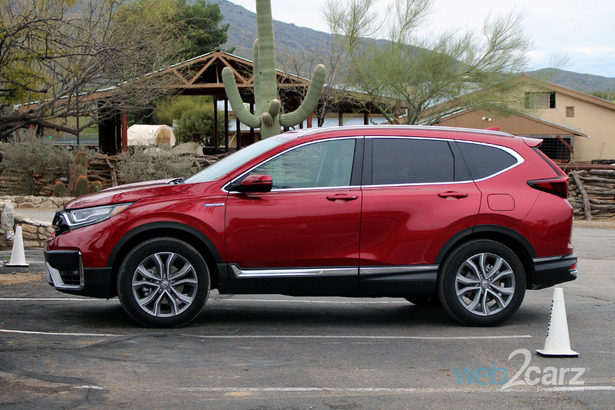 We started our adventures at the Loews Ventana Canyon Resort in Tucson Arizona where Honda’s product planning and engineering teams filled us in on the strategy and benefits of the new hybrid engine. We learned that Honda is America’s most fuel-efficient OEM (only behind Tesla) and the CR-V Hybrid is part of larger electrification efforts for Honda’s core lineup. The CR-V is the automaker’s best-selling vehicle and holds the title of best-selling crossover in America since it was introduced in 1997. It’s no surprise that Honda chose to add it to its already successful hybrid lineup which includes the Accord Hybrid and the Insight Hybrid.

Although the CR-V Hybrid appears nearly identical to the petrol version from the exterior and interior, the major difference can be found in the driving experience and the fuel economy. According to Honda’s Product Planner, Brett Watanabe, the CR-V Hybrid keeps what customers love about the petrol CR-V but adds more refinement. The new hybrid engine also adds more horsepower, torque, and nearly 50% improved fuel economy to make the CR-V even more practical for families. 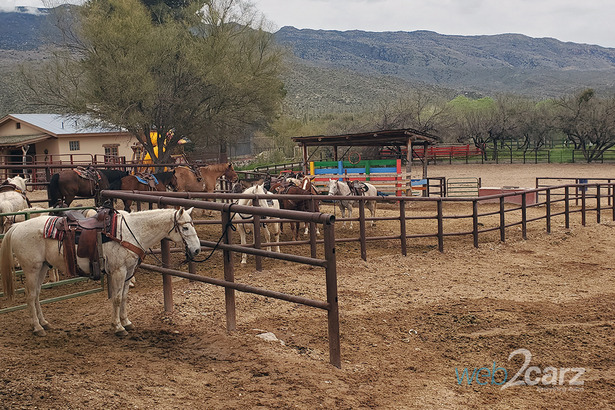 Our drive took us to Tanque Verde Ranch where we traded the CR-V Hybrid's 212 horsepower for a different kind.

Once we got the updates straight from the source, we set out to drive the route to Tanque Verde Dude Ranch where we’d put the CR-V Hybrid to the test against competition. As we started our hour-long drive, we were impressed by the quiet and smooth ride and the impressive power from the CR-V’s two-motor hybrid system. The system includes a 2.0-liter DOHC Atkinson Cycle engine, generator/starter motor and propulsion motor for a combined 212 horsepower and 232 lb-ft of torque. The Hybrid offers significant power and torque advantages over the petrol’s 190 horsepower and 179 lb-ft of torque which was noticeable as we accelerated from a stop or to get up to highway speeds.

Being in the desert, we were surprised by the downpour we encountered on our drive to the ranch, but luckily our CR-V Hybrid wasn’t rattled. We didn’t experience any noticeable loss in traction thanks to the CR-V’s Real Time AWD system. Little did we know we were going to put the AWD system to the test again in very different conditions. 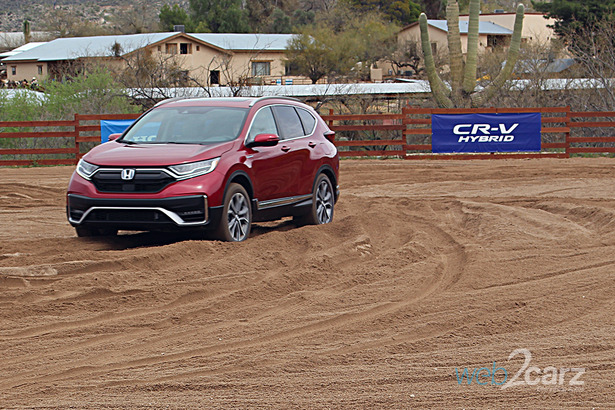 We're not going for 8 seconds, but for a tight figure-8 through the sand.

As we arrived on the vast property of Tanque Verde Ranch, we found ourselves surrounded by mountains, cacti, and dozens of horses which made Honda’s first activity, a "Hybrid Rodeo," very fitting. Although there were no bulls or clowns involved, this was still intended to be a fierce competition. We were tasked with driving figure-8 loops through cones that were set up in a sand-filled rodeo arena.

The competitors in this rodeo weren’t the drivers, but the vehicles, which included the Honda CR-V Hybrid, CR-V Petrol, and the Toyota RAV4 Hybrid. The goal was to test out the CR-V Hybrid’s Real Time AWD in rougher conditions and compare it to the other models. We drove the CR-V Hybrid first and found it to be very composed and capable in the sand. It remained quiet and didn’t put up a fight as we threw some sand around on the course. 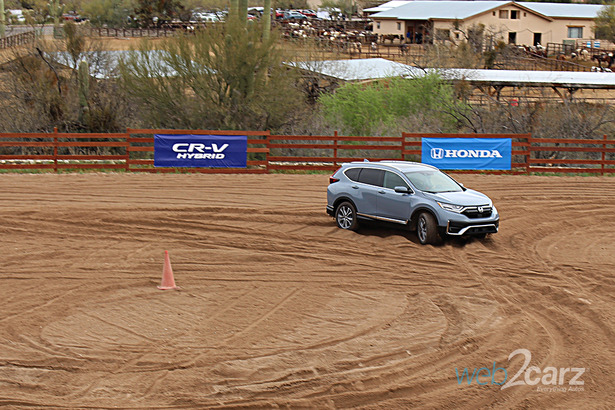 The Toyota RAV4 Hybrid was next, and while it was capable of making it through the deep sand, it was a much louder and rougher ride (an angrier bull, if you will). While we’d argue the RAV4 was more fun, the CR-V Hybrid was more tame and refined. Finally, we tried the CR-V petrol model and found it struggled more through the course than the hybrid model. Although it may have been due to us roughing up the sand in the first two vehicles, we’ll attribute most of the difference to the Hybrid’s AWD system.

The electronically controlled rear differential automatically engages before wheelslip occurs, and when it’s not needed such as on dry pavement, it disengages for improved fuel efficiency. For the Hybrid Rodeo competition, we named the CR-V Hybrid the winner, but would it fare as well in an MPG test? 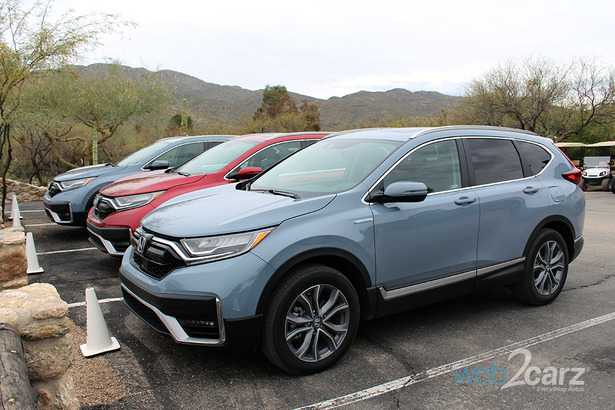 Our next challenge was an "MPG Loop" challenge where we were given the opportunity to drive the 2020 Honda CR-V Hybrid and the 2020 Toyota RAV4 Hybrid on the same 20-minute route around the ranch to see which vehicle gets better fuel economy. We started in the CR-V Hybrid which gets 48% and 31% gains in city/combined EPA fuel economy ratings when compared to the petrol model.

The 2020 CR-V Hybrid is EPA rated for 40 / 35 mpg (City/Highway) which is significantly higher compared to the petrol CR-V's 28 / 34 mpg (City/Highway). Our goal for this challenge wasn't to test the CR-V Hybrid against the gas-only but to gauge how the hybrid will perform against its biggest competitor, the Toyota RAV4 Hybrid. In the CR-V Hybrid, we got an mpg of 38, and the Toyota RAV4 Hybrid driven on the same loop got us up to 42 mpg making it the clear winner of this competition. 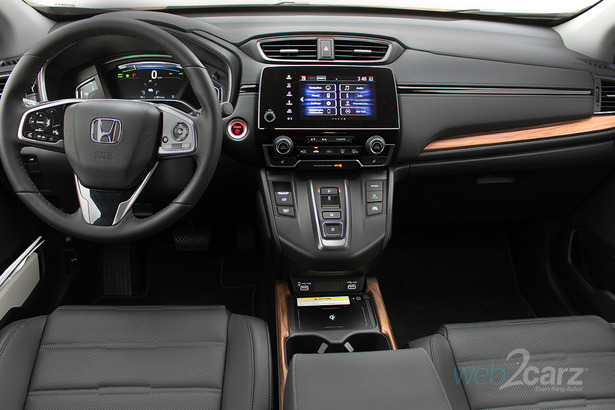 The overall interior and exterior styling of the 2020 CR-V is similar to last year's model with a few tweaks and upgrades including more storage space, wireless charging (in Touring trim), and new lighted USB ports. The CR-V Hybrid Touring trim we drove had comfortable genuine leather seats and all the CR-V models get more storage space in the cabin. A redesigned center console comes with a sliding tray that can flip up to fit hold larger items like bags and purses. 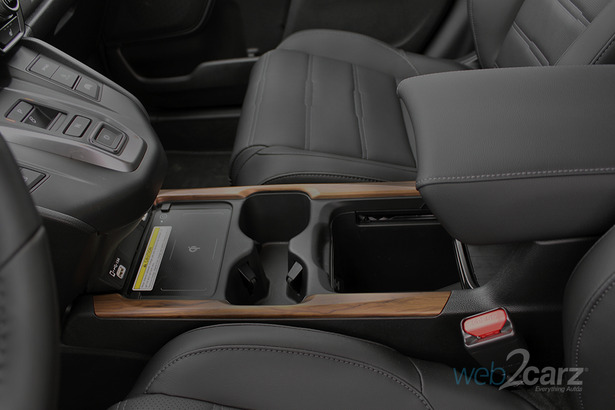 The interior of the 2020 CR-V now gets wireless charging and a redesigned center console for optimized storage space.

The 2020 CR-V Hybrid offers exclusive features like a unique digital gauge cluster with easy to read driver information, a push-button gear selector and multiple drive modes including 'Sport' for aggressive throttle, 'Econ' for fuel efficiency and 'EV' which allows you to drive in EV up to a mile depending on the charge. Our CR-V Hybrid in the top Touring trim featured dark genuine leather seats, a leather-wrapped steering wheel and shifter, and wireless charging. The interior was comfortable, spacious, and user-friendly with a clean, uncluttered layout. 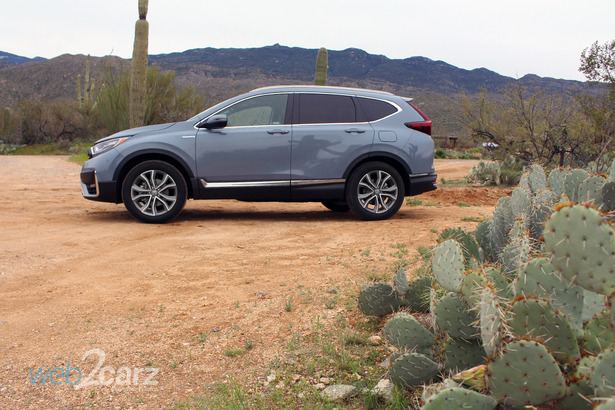 The differences between the CR-V Hybrid and the gas models are even more subtle when it comes to their exteriors. The Hybrid gets unique front and rear bumper designs, 5-element LED fog lights in the higher trims and unique blue hybrid badging on the front grille, tailgate, and front fender. 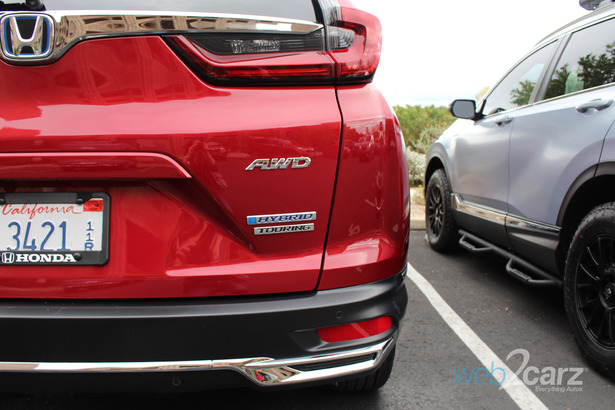 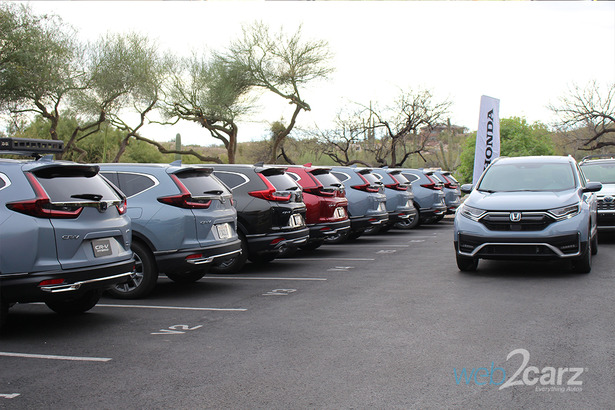 The 2020 CR-V Hybrid is built alongside the petrol CR-V at Honda's Indiana manufacturing plant, with the engine coming from Honda's Ohio engine plant. The 2020 CR-V Hybrid joins the Toyota RAV4 Hybrid and the 2020 Ford Escape Hybrid in the hybrid compact crossover category. The top Touring trim of the CR-V Hybrid falls in the middle of the pack at $37,070 MSRP, with the RAV4 Hybrid at $39,025 and the Ford Escape Hybrid at $36,740. Below is the breakdown of the pricing for the four available trims of the 2020 Honda CR-V Hybrid.