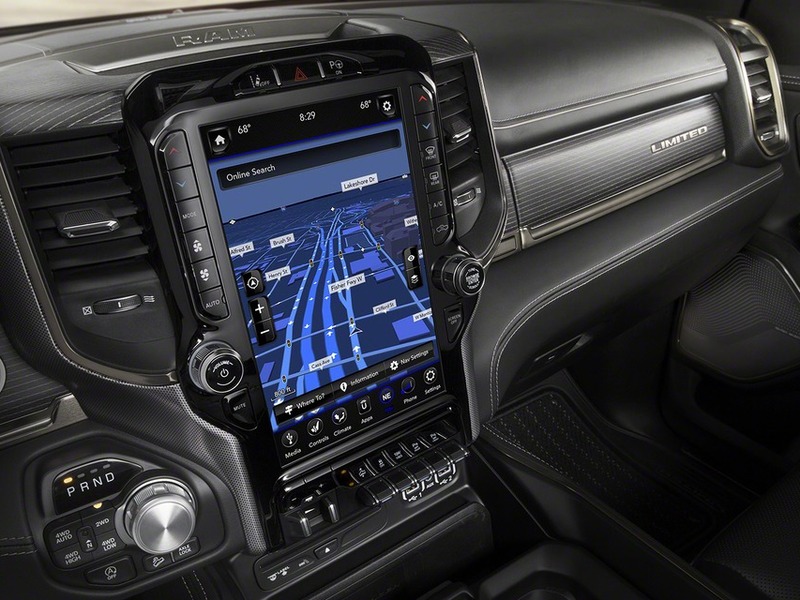 Geez, you could watch the Super Bowl on this thing. Talk about screen envy.

The 2019 Ram 1500 isn't just about hauling more stuff and looking tougher all the while. It's also now very much about in-car technology, and FCA made a big move with a big feature. The new truck has an optional 12-inch touchscreen with navigation, and the thing is just busting at the seams with slickness. We got to mess with it a little bit at the 2018 Chicago Auto Show, and boy did it stand out amongst the bevy of pickup trucks there. The new screen, along with a seriously spacious interior take the Ram 1500 into the stratosphere of bale haulers. Hell, it makes us want one. 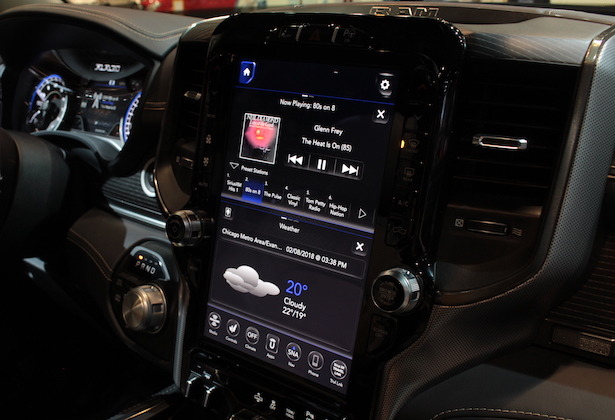 Recent polling shows that consumers now care about technology and infotainment as they do about the car's design and driving characteristics. That really comes as no surprise, and FCA is getting on board by infusing their workhorse pickup truck with one of the best screens in the industry.

The Ram 1500's available Uconnect 4C NAV qualifies as the largest-in-class touchscreen, and it comes with full-screen navigation, Apple CarPlay and Android Auto, pinch-and-zoom capability, and a truly vivid and expansive view. We really liked the way it looked, as well as the redundant controls that flank the touchscreen so driver and passenger have the same access (because drivers love giving up control, right?).

Take a look at our quick video of the new huge touchscreen in the Ram 1500 at this year's Chicago Auto Show:

The display is larger than Volvo's 9-inch Sensus system in the XC90 SUV but smaller than the mammoth 17-inch tablet in the Tesla S or X models. Having tested the Ram's system for a few minutes, we can easily attest that 12 inches plenty big. It actually takes the already great Uconnect system and makes it easier to use thanks to the increased size. The screen is vivid, pretty responsive, and really takes the interior to the next level. Ford's top-end Sync 3 screen in the F-150 is only 8-inches, but the Sync 3 system is one of the fastest. We'd rather have the Ram 1500's version, and the interiors (especially in Laramie Longhorn and Limited trim) are better than Ford's King Ranch.

As good as the last version of the UConnect system was, the fourth-gen version the new truck is even better. Everything seems easy to find and use, and we didn't notice any significant lag in the response time. Why other automakers can't make it this easy is beyond us. The simple row at the base for functions and an upper-left corner "home" button make navigating the choices quick. You can also split-screen two apps, such as running the navigation on top and Apple CarPlay on the bottom. Not too shabby.