Too much in some areas, not enough in others 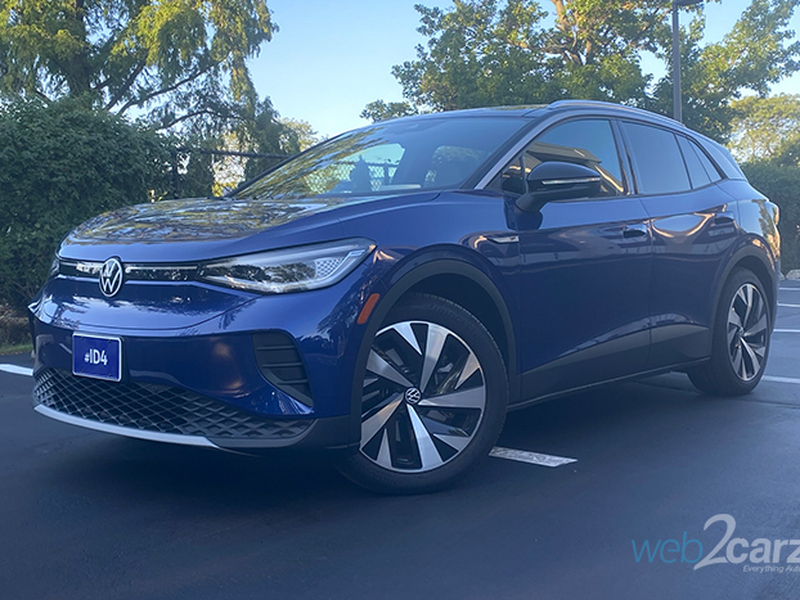 The ID.4 make a good case for the EV crossover, just not a particularly strong one.

The 2021 Volkswagen ID.4 is the brand's first true EV, the first member of an upcoming lineup of electric vehicles. The brand plans on spending upwards of $19 billion for investment “e-mobility, hybridization and digitalization” by 2025. That's a big chunk, so the ID.4 is an important first effort for the company in what will set the tone for the rest of the lineup. 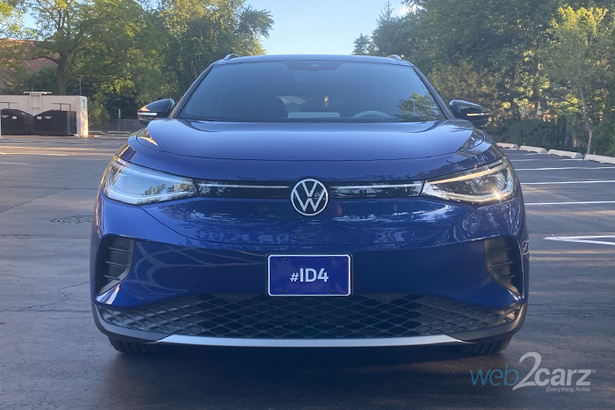 The ID.4 is touted as an electric crossover, which is a smart segment for the brand to start with since crossovers are growing faster than any other automotive segment. We got to drive the ID.4 1st Edition for a week to experience this fresh, new electric vehicle. Here are our impressions.

How Does It Look? 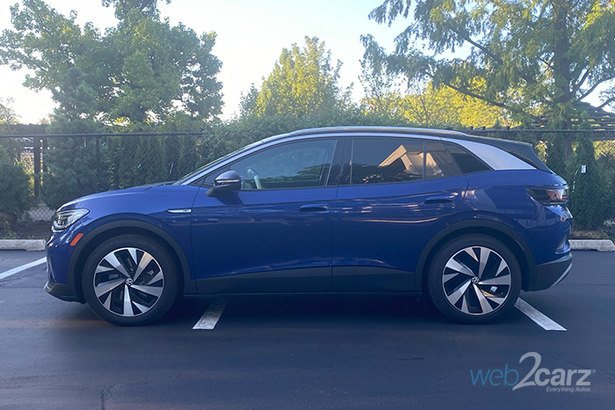 The ID.4 isn't an unattractive vehicle, but its shape is a bit amorphous. The curves and smooth surfaces are nicely done, but the entire package isn't particularly distinct. Of course, it's important for an EV to be aerodynamic in order to aid efficiency by cutting down on wind resistance, but the ID.4 just doesn't stand out all that much from the crowd. It's not much different from other crossovers out there. Here are some of the ID.4 1st Edition's exterior features: 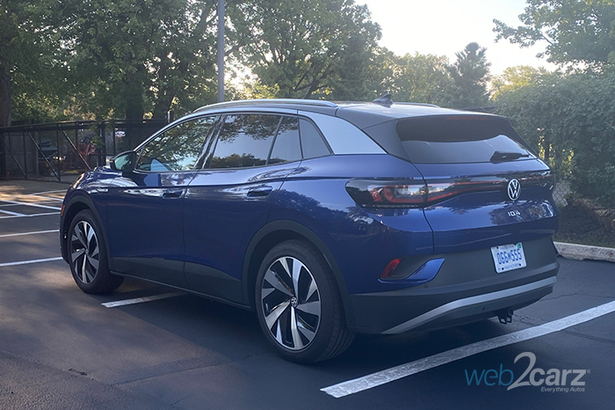 From some angles, the ID.4 is attractive (the front 3/4th, for instance), but most of the way the ID.4 looks is pretty conventional. From a distance, it looks like most other small crossovers. The thick C-pillar is raked for effect, but it doesn't really add any character to the vehicle. Likewise, the headlights and taillights that are unified for a wider look don't set the ID.4 apart from other vehicles. To us, it bears resemblance to a last-generation Toyota RAV4, only more bloated. 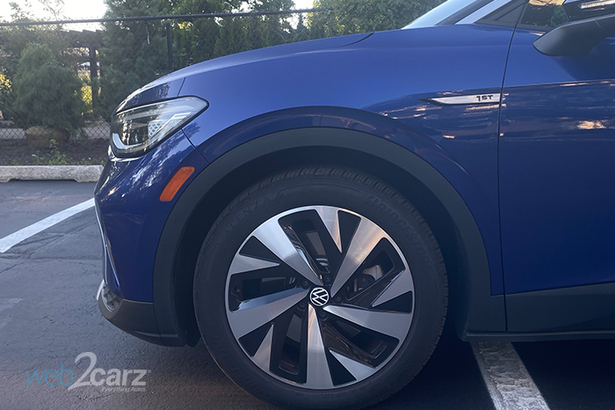 We think the ID.4 1st Edition could have visually (and aerodynamically) benefitted from some cool disc wheels. At least they would've been distinct and made the ID.4 look more futuristic. We think the 20" alloy wheels on our tester were fine, but they seem better suited on a Volkswagen Atlas crossover. Even the versions on the ID.4 Concept (below) would've looked better for a vehicle that's supposed to harken in the next era for Volkswagen. 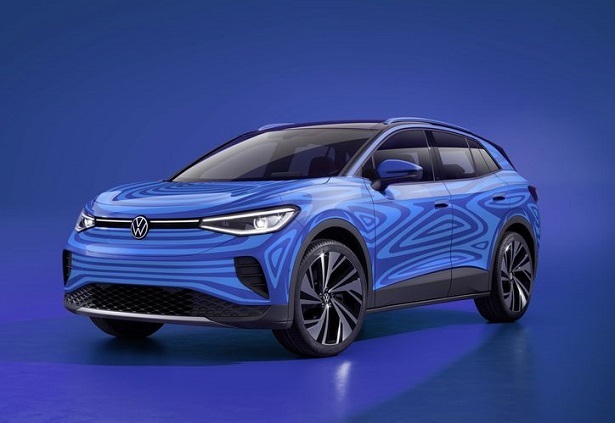 As we said before, the ID.4 isn't an ugly vehicle, but it doesn't make a particularly strong impression. It certainly won't offend anyone, but it errs on the side of bland. It's just not special enough to us for the brand's first EV. Again, it makes total sense for VW to make its first EV a crossover, but the ID.4 just isn't very distinct. 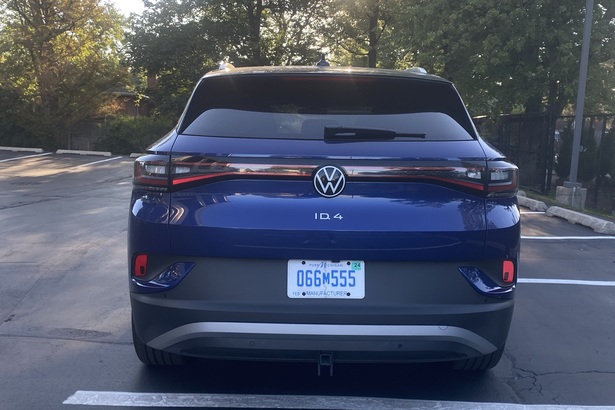 Tesla (Model S), Chevy (Bolt), and Nissan (LEAF) were able to make EVs that looked pretty different from what was already out there, but VW needed to set theirs apart even more because of the ubiquity of crossovers. There are more entrants in the EV segment, so it would've made sense for the brand to do something that would stand out design-wise. While the Tesla Model 3 doesn't look especially fetching, it is unique. The interior of the ID.4 is certainly different, but as we shall discuss, it's not all great.

The Interior is Unique But Too Quirky 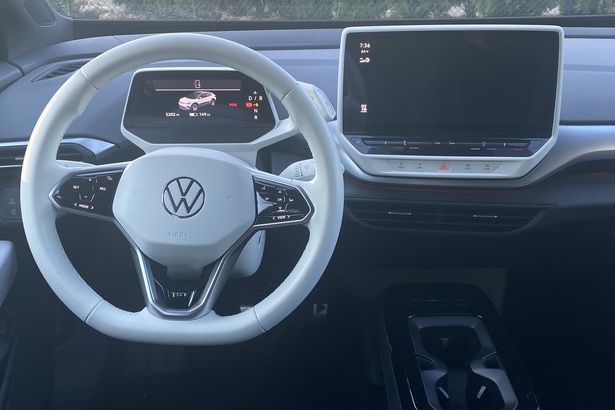 The interior designers of the ID.4 were given the task of rethinking what a car interior could look like, and boy did they ever. Volkswagen made the interior very unconventional in terms of the technology and controls, and it seems they may have unnecessarily jumped the shark on this one. We didn't think it was particularly great to use, despite the fact that the styling is quite unique. Before we get into the details, here are some of the interior features on the 1st Edition. 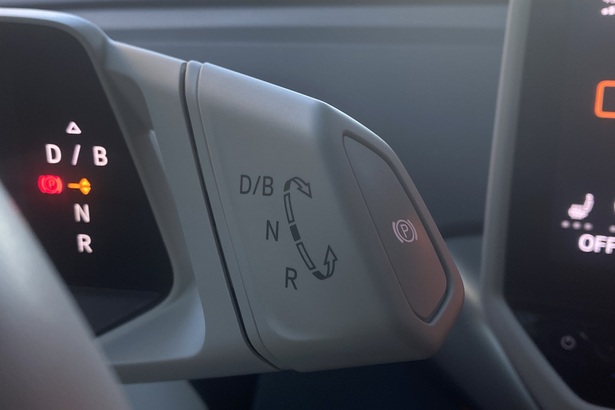 Let's talk about the gearshift. It's built off the frame of the instrument cluster, not a location that we would choose. It's not even on the steering column, a location that would at least make some sense. It's not even on the center stack or center console. It makes use of a totally new way of shifting, via twist operation. Not only does it feel different from a rotary shifter, it feels awkward to use, and you have to look at it to operate it properly. We find that the styling looks modern, but it adds difficulty where it's completely unnecessary and some would argue, unsafe. 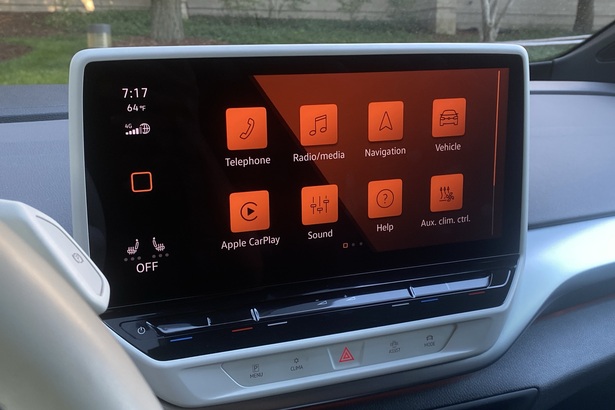 The large 12" touchscreen is clear, but we don't find it especially attractive with the orange and black icons. Responsiveness is about average, and we would never call it quick. To make things worse, the home button isn't in the shape of a house icon but in the form of small orange outlined square. There are also heated seating icons on the left side of the screen, versus buttons in between the seats or within the climate controls below the screen. 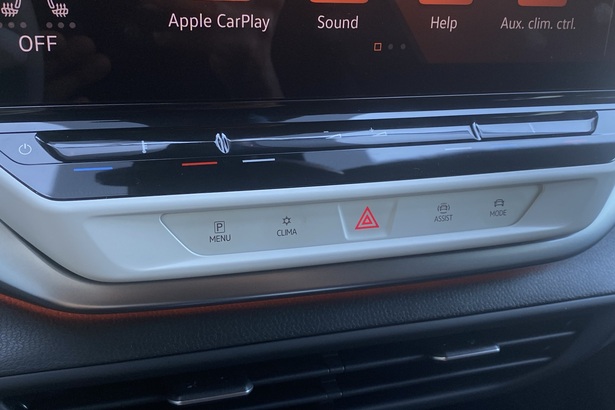 About those climate controls. The thermostats are sliders on the outboard positions of the climate section. The fan is located in between on its own slider section. Then, you push the "Clima" button on the white cluster below the sliders to bring up the climate controls on the touchscreen. Can this be any more confusing? You have climate controls in three different sections of the center console, which is mindboggling and essentially an operational dumpster fire. While the slider became easier to use during our test period, we still hate the whole control system.

The digital instrument cluster is easy to read, but it doesn't display any efficiency or battery usage data (that we could tell, unless we missed a setting) that's interesting to EV owners.  At the end of the day, as with all in-car technology, you would eventually get used to the ID.4's systems. It's just that it's overly complex for no reason. The Discover Pro Max 12" Touchscreen doesn't even look all that great, either, so we expected the functionality to be better. 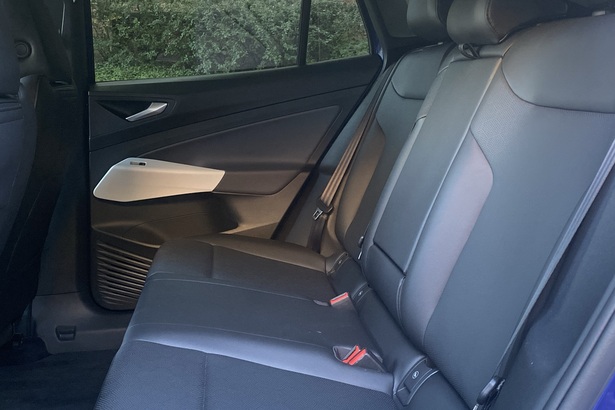 In terms of overall comfort and space, the ID.4 shines. There's ample legroom and headroom for both the front and rear occupants. The dimensions for front and rear legroom are 46.7 inches and 37.6, respectively. Five adults can fit comfortably, and the rear floor is flat so the middle passenger gets as much legroom as the occupants in the outboard positions, despite the flat seatback. Since the cabin layout provides an airy and open atmosphere, it feels big inside. With the exception of the thick, raked C-pillars, the ID.4 has good visibility. 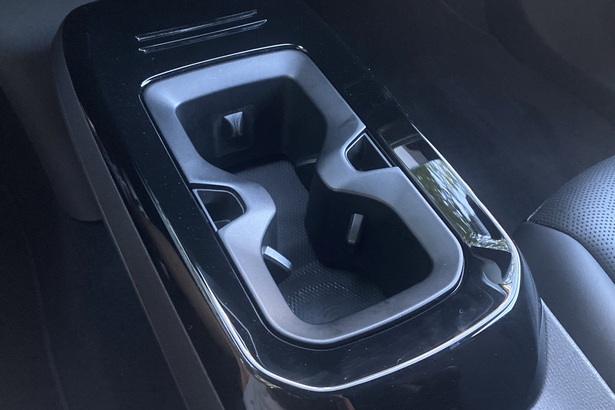 In terms of storage and cargo space, the ID.4 is decent. Moving the gearshift level up to the instrument cluster frees up the center console, but the size of the storage binnacle's frame makes no sense to us. The binnacle can accommodate a twin-cupholder insert, or you can use the binnacle by itself to hold medium-sized items like large smartphones, keys, pens, etc., but the frame is too thick, robbing the storage capacity. The rear of the ID.4 is well-sized with about 30 cubic feet behind the second row and 64 cubic feet with the seats folded flat. That's a tad smaller than the Tesla Model Y. 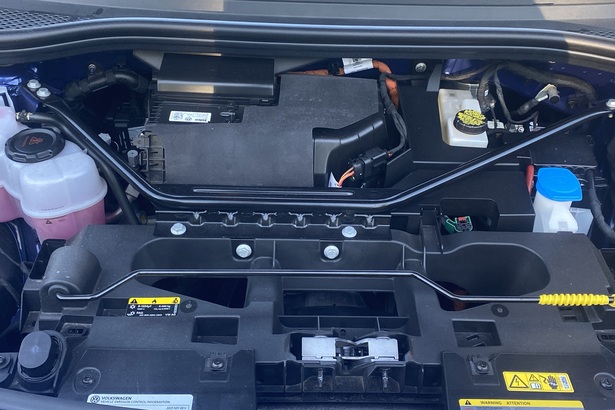 First things first. The ID.4 has a range of 250 miles on a full charge from its 82 kWh Lithium-ion battery pack. Unlike Tesla, whose real-world range numbers generally fall short of the mark in testing, the ID.4 actually beat its EPA range estimate by a significant amount. Edmunds.com actually drove an ID.4 in Pro trim 28 miles farther than its 260 mile EPA estimate. That's nothing to sneeze at because 28 miles extra could make the difference between making it home and getting stranded because you couldn't find a charging station. 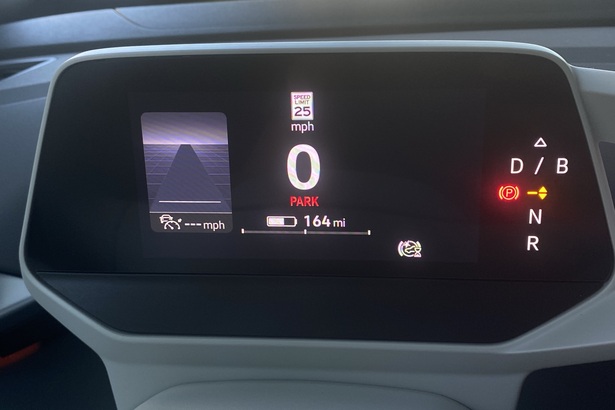 We didn't deplete the battery since we didn't drive the ID.4 anywhere near its 250-mile range. Our model was rear-wheel drive only, making about 201 horsepower. The pricier dual motor version churns out a healthy 302 horsepower. Regenerative braking is present, but the ID.4 doesn't provide a one-pedal driving experience that some EV shoppers want.

The rear-wheel drive ID.4 isn't as fun as we would've hoped. Not only is it slower than some competitors (even the Kia Niro EV) at 7.6 seconds to 60, the driving dynamics aren't quite up to snuff. Mash the accelerator, and there's no real sense of urgency we notice even on cheaper EVs. It just doesn't provide the thrust and immediate torque experience you expect. It's fine in the turns with a little bit of body roll, but it's not thrilling to drive hard. 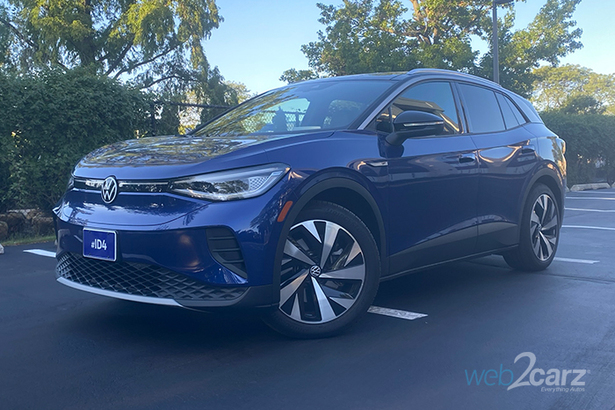 Our assessment of the ID.4 is that it's competent and comfortable while not being especially easy to use or fun to drive. Efficiency and range are very good for the price, but we think vehicles like the Hyundai Kona and the Kia Niro EV present better values, better design, and a better driving experience (despite the fact that they're smaller than the ID.4).