Review: The Mazda MX-30 EV is Most Definitely a Niche Electric Crossover

Have fun but prepare to charge often 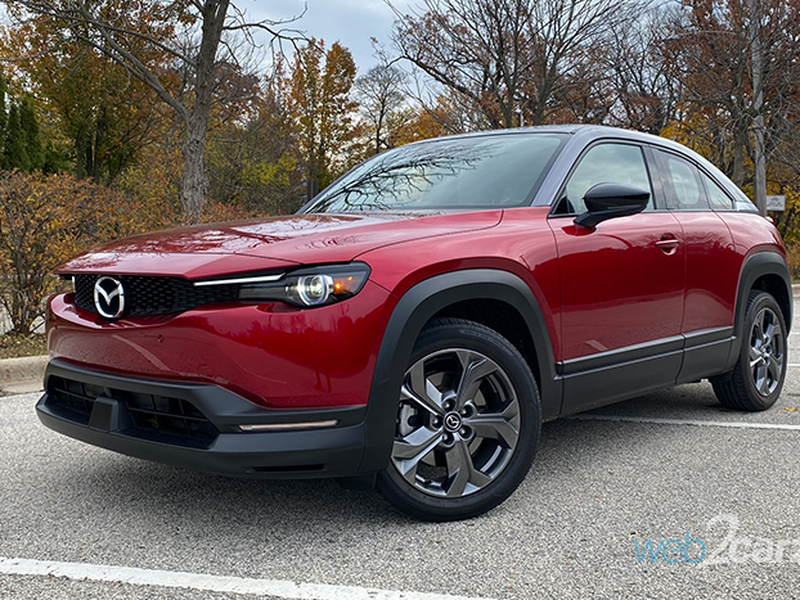 It might work IF you have a second vehicle.

We recently got behind the wheel of the new Mazda MX-30 crossover EV. In the world of electric cars, it's an interesting approach to both efficiency and purpose. With 100 miles of all-electric range, the Mazda MX-30 is at the very low end of the range spectrum for consumer EVs, and one might question why it even exists in a world where 200+ miles is what's considered minimally acceptable. 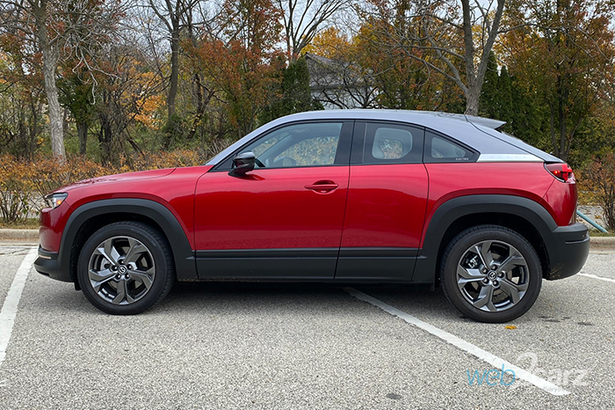 The MX-30 won't be mistaken for anything else, not even another Mazda.

When other small EVs easily outpace the MX-30's range, it's a bit of an uphill battle. Interestingly enough, Mazda's rationale for the MX-30's small battery is for the sake of lightness that leads to better driving dynamics. They have also stated that it really does meet about 80% of most EV driver's needs because the average American round-trip commute is a little over 30 miles, so the MX-30 should qualify. We drove (and charged) the MX-30 to see what it's all about and whether or not it's worthy of consideration for an EV purchase. Here are the important details of our tester.

Real-World Usage: Driving to and From the Office 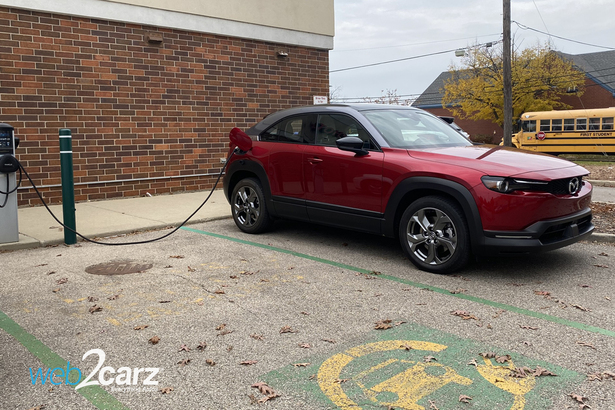 Charging up the MX-30 at a Level 2 Chargepoint in a nearby Walgreen's parking lot.

We don't often get EVs to test drive, but the frequency is increasing. When I was informed that the MX-30 was coming to us to review, I was both excited and a bit uneasy given the fact that I knew about the 100-mile range well in advance. When the MX-30 was dropped off by one of our fleet service companies, it had about 70 miles of range on it. My drive from the office to home is a little more than 12 miles (12.6, to be exact), so there was no need to charge it before the first drive. It was fairly cold (40 degrees), so I wasn't sure how much of an effect that would have on the battery usage and range. 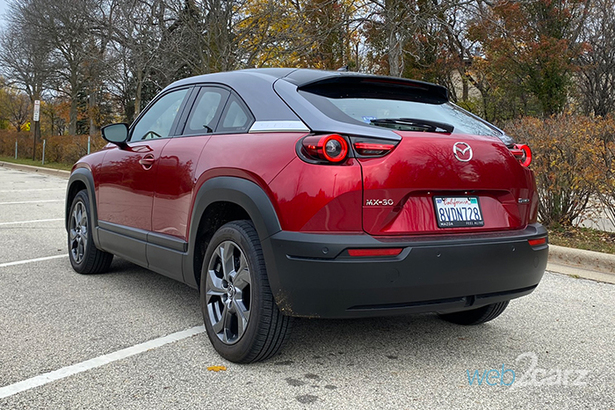 When I got home, there was a little more than 50 miles of range remaining. So, that's definitely more than the 12.6 miles of driving distance between work and home. It's no surprise because I used the Bluetooth audio system to stream music from my iPhone and also turned on the heat (low, so as not to completely tax the battery). 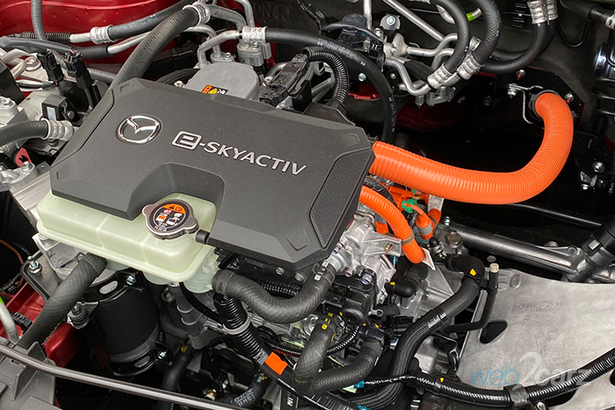 When I got home, I plugged into my garage's standard 110-volt outlet. It charged for a little over 16 hours, and the range read 80 miles. That's less than 30 miles of range added in 16 hours. But that should come as no surprise given the meager power of a home outlet. For example, the 239-mile-range Kia Niro EV takes 60 hours to go from dead to 100% on a Level 1 home outlet. Once you get to 80% of charging capacity on most EVs, the rate of charge slows down tremendously. If you enter the game with that knowledge (or you just install a Level 2 charger in your home), you'll be better prepared for EV ownership 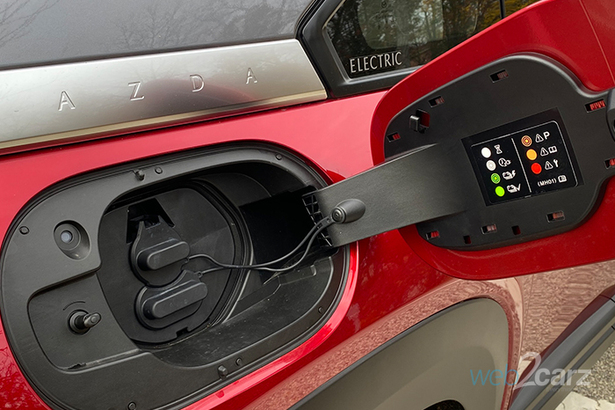 It's not so much the length of time to charge since most EV drivers have a Level 2 charger at home or top off on Level 2 chargers at work, but it's the frequency you have to charge the up MX-30. With a 25-mile round trip daily, use of the heat, audio, and occasional wipers, I had to charge up every two to three days if I didn't want to kiss single-digit ranges. This, is what we call range anxiety, and it's real. This feeling contradicts my initial article on the MX-30 before having actually driven it. 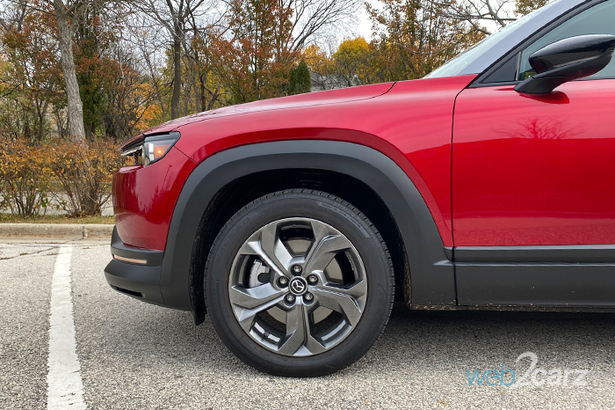 Mazda says the MX-30 is meant to be more engaging to drive than most other EVs. While we can understand that this was Mazda's focus for its first electric vehicle, the payoff was less than we thought it would be. First of all, the MX-30 doesn't exactly feel spry off the line. The front-wheel-drive only Mazda is hampered by a dearth of power and that electric motor has to move 3,655 pounds. While that's not especially heavy for an EV, consider the fact that the Kia Niro EV has 200 horses, the Chevy Bolt EV has 201, while the MX-30 has a paltry 143. Even the slow Nissan LEAF has four more than the MX-30. 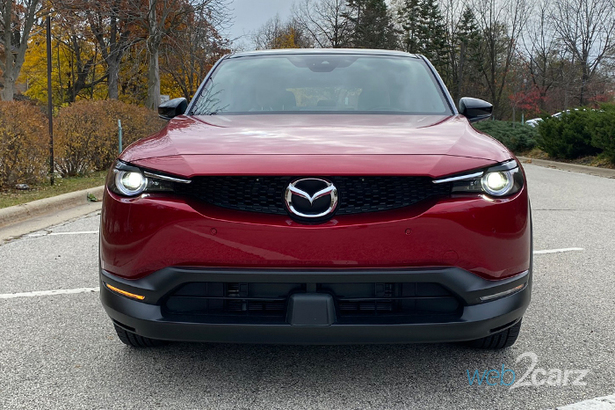 The result is that the MX-30 isn't quick, by any means. 0-60 mph comes in just under nine seconds, which feels like an eternity. That's about a second quicker to 60 than the very slow Nissan Kicks, which does it in about 10 seconds. That's nothing to write home about, especially since EVs are generally known for quick acceleration thanks to the immediate peak torque. There's even a bit of a delay when you mash the MX-30's accelerator (not gas) pedal. 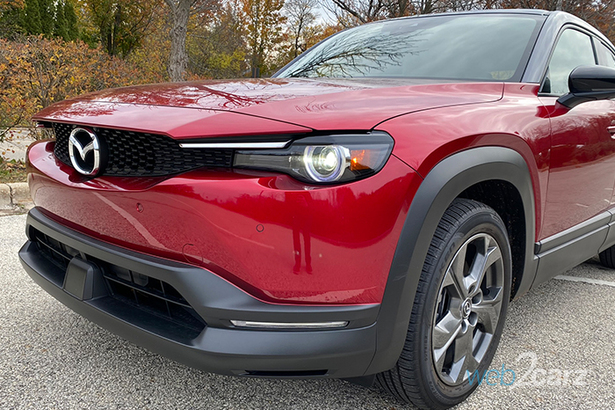 On the bright side, the MX-30 takes corners well, and it has sharp steering. For those who like spirited driving, the experience has to come on local roads versus straightaways. The steering is responsive, and body control is good, but the lack of straight-line performance is a disappointment. It's more engaging than the Kia Niro EV and the Volkswagen ID.4 we've driven, but the dearth of power sullies the experience.

The Special Interior... and the not so special parts 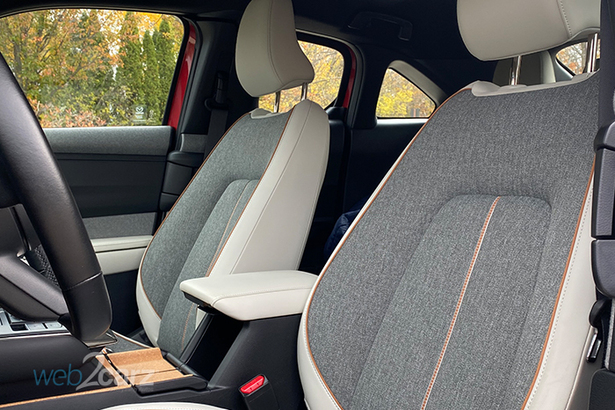 The interior of the MX-30 is certainly special with its use of sustainable materials, the most obvious of which is cork on the center console. We're not sure about the practicality of it, should you spill coffee or juice on it. We're guessing it's been specially-treated to handle such accidents. The middle tray splits down the middle to reveal cupholders. While it's certainly unique, it doesn't balance out the very bulk surround on the gearshift knob that also happens to be awkward with its action. Park is engaged by moving the knob to the left, which isn't exactly intuitive. Not sure what Mazda was thinking there. 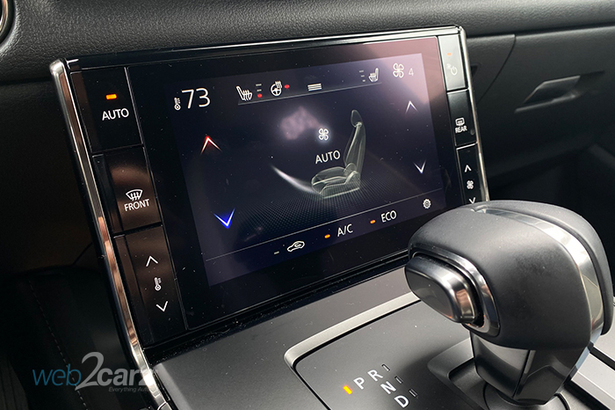 The climate control screen is awkwardly located in front of the shifter, a bit too low for our liking, and we would've preferred largely physical controls. Sure, some buttons are present on the screen frame, but the redundant thermostat controls on the screen are right next to the buttons, which makes no sense. The door trim is made from recycled plastic bottles, as is the stitching inside. The leatherette seats get grey upholstery that looks and feels refined. The rear seats receive the same treatment, and it's a very attractive look. 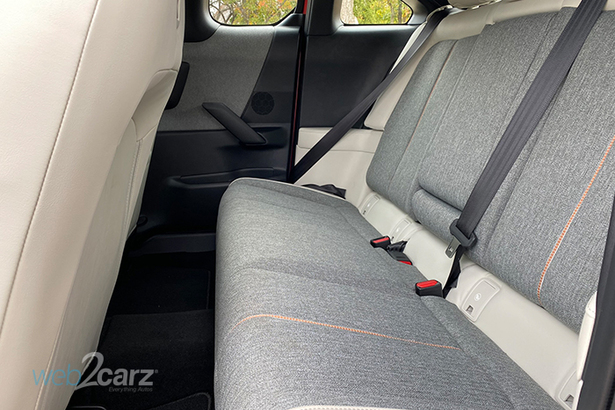 The rear legroom is tight at 33.9 inches.

Front occupants have plenty of room, but rear occupants will suffer for a number of reasons. First of all, there's about 2 inches less legroom compared to the Chevy Bolt and the Kia Niro EV, while the three-door configuration makes ingress for the rear occupants a one-sided affair. You also have to open the front door to open that rear half-door. This is a strange choice, and it detracts from the already minimal practicality of the MX-30. Once inside, the seats, themselves, are comfortable, but the environment is a bit suffocating due to the thick B-pillar and tiny rear side window. 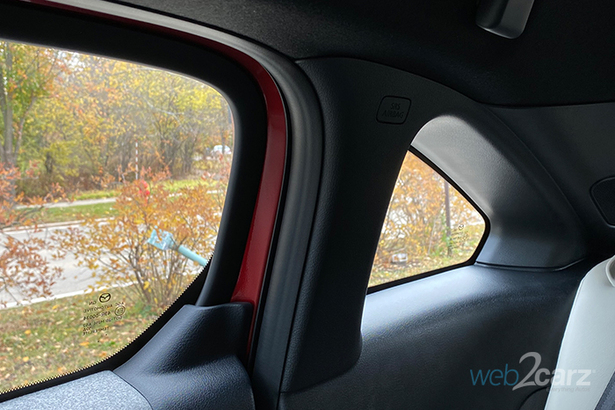 The B-pillar is way too thick, and the porthole of a window doesn't help matters.

We really did want to like the MX-30, but in the end it was too hard to ignore its numerous faults. Sure, it handles well, looks like no other crossover EV on the road (or any crossover, for that matter). It's sustainable materials are impressive, but some of the interior ergonomics and tech fall short of the mark and aren't commensurate with the original interior design intentions. Room for four adults comfortably is a stretch, as well. 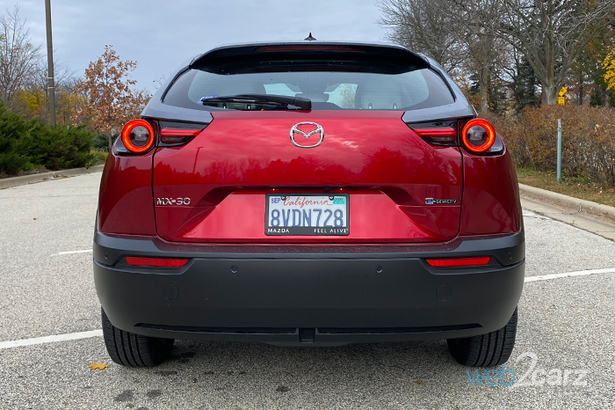 It's hard to make a strong recommendation for the MX-30 for single vehicle ownership. Mazda even defends it by saying it's really for buyers who have a second car for longer drives, which is an odd justification but most likely true. 100 miles of range doesn't make sense if you have to drive more than 20 or 30 miles one way. Any more than that, and you have to spend time charging in order to get back, and then you have to factor in that time. In terms of space, it also falls short for more than two people for any length of time. It's fun to toss, despite its lack of power, because it handles much better than the competition.

Overall, the MX-30 is on the pricey side for the amount of range you get. Sure, you get the $7,500 tax credit, but you can get the Kia Niro EV for a smidge more and still get the tax credit. You get 139 more miles of range, to boot. The only comfort might come in the form of the MX-30 with the range extender, but that will, apparently, come in the form of an unreliable and oil-thirsty rotary engine, which seems counterintuitive. There's no word on what the additional range will be, but that engine will effectively make the MX-30 a Plug-In Hybrid (PHEV) rather than an EV. The MX-30 is only available in California right now and in very limited numbers. Mazda will gauge public reception and build (or not build) accordingly. That's probably a good idea.