Review: The 2021 Toyota Sienna XSE Might Just Be the Minivan to Covet

We drive it on a family vacation in Florida, and it shines 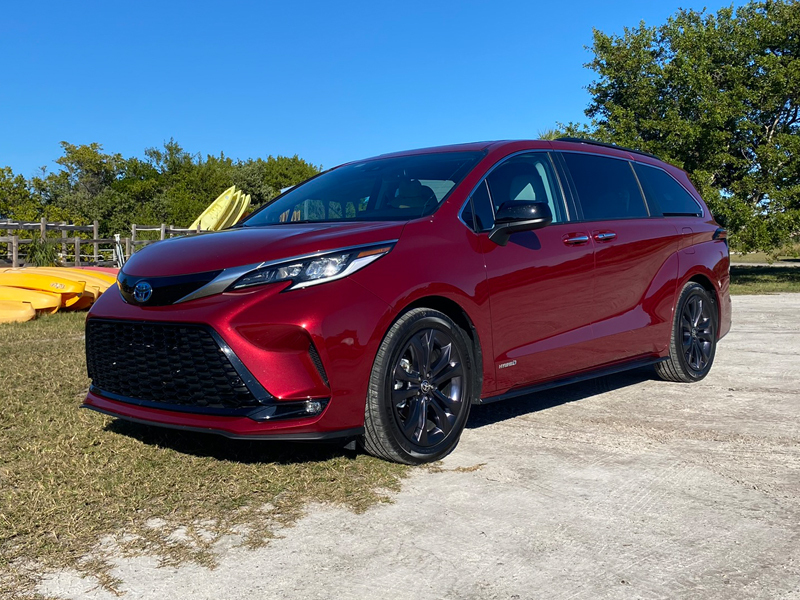 Yes, that's a racy, red minivan. You want one, don't you?

Let's just get this out of the way. The current Toyota Sienna minivan is stunning. It has curves and creases for miles, and it even looks sporty. Compared to the minivans of old, which used to look pretty stupid not that long ago (including the last-generation Sienna), the new Sienna is all kinds of handsome, borderline head-turning. When it's clad in Ruby Flare Pearl (red) with black wheels and trim, it's killer. Yes, we're still talking about a minivan. 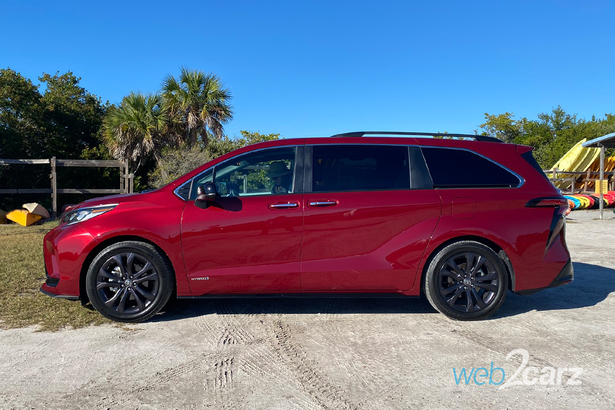 No other minivan in existence has the radical styling of the Sienna.

What's more, it's a hybrid minivan, as all Siennas now are. Not only does this sound great to the environmentally conscious, but it also makes the Sienna truly efficient, not what minivans are typically known for. In front-wheel drive configuration like our tester, the Sienna gets 36 city/36 highway. The gas-only Odyssey gets a paltry 22 combined, and the Chrysler Pacifica Hybrid gets 30 combined. Win for the Sienna. 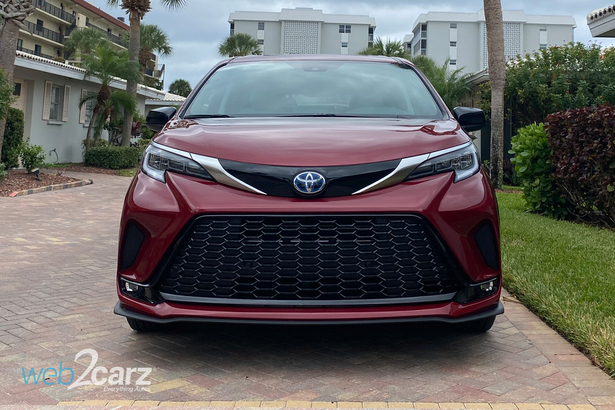 For our weeklong family holiday, we flew to Florida and picked up a 2021 Toyota Sienna XSE (aka, the sporty version) and hauled our entire family a couple of hours south to the quaint and totally relaxing town of Siesta Key. We had three kids in tow and a boatload of luggage. The Sienna would have to prove its worth to more than just me. My wife and kids reacted with, "Wow! Is that our car???" They thought it was pretty cool, and my wife actually hates minivans. This was a very good start. 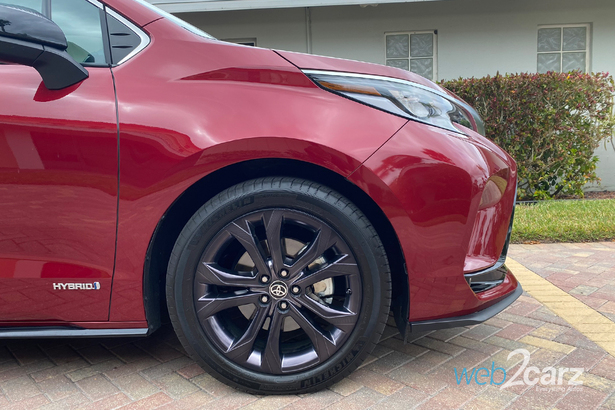 Here are the important details of our tester: 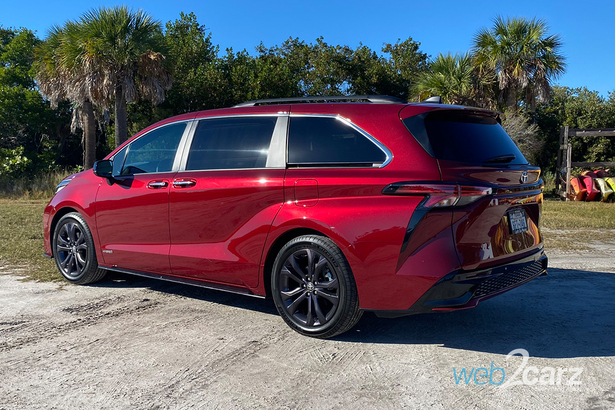 The last minivan we thought looked awesome was the Toyota Previa from the '90s. It kinda looked like a family van crossed with Killer Whale. Minivans, as a whole segment, just don't look very good because they're purpose-built vehicles meant to hold max cargo and passengers. The last Sienna fit the bill in terms of space, but it just didn't look very good. Nobody expects minivans to be remotely attractive, of course, but the Sienna XSE is the exception.

Rather than design a minivan that's flat and slab-sided without much character, Toyota designers sculpted the Sienna to the extreme, especially the expansive grille, the hood and body creases, the rear fender bulges, and the dramatic taillights. It all comes together extremely well. No dad-mobile here, just one seriously good looking vehicle. 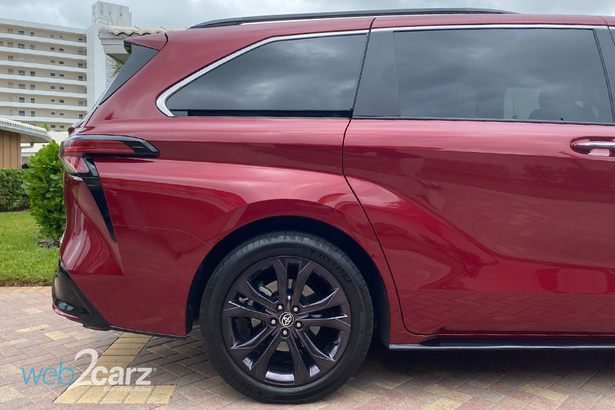 It was inspired by Japanese bullet trains, which you can see in its overall shape. It also has similar styling cues as the new Toyota Highlander and even the Toyota Supra sports car. Some might find the Sienna a bit overstyled, but in XSE trim with black wheels, it looks spectacular. The red paint shows off the creases and contours perfectly, and the black emblems, black taillight trim, and black treatment on the rear valance and rocker panels round things out beautifully. We also approve of the conservative use of chrome on the XSE. A menacing minivan? Indeed, it is.

An Interior That Impresses 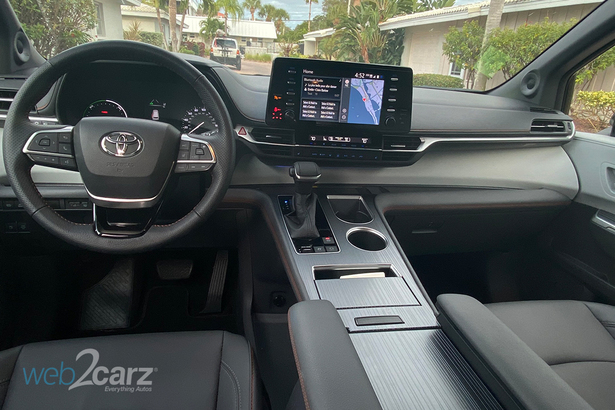 Toyota also departed from the last Sienna's interior in a big way. Sure, the old Sienna was really long in the tooth, so the styling and design of the cabin was dated and very conventional. It could only go up from there, really. But Toyota did things right, for the most part by pushing the envelope a bit. The new Sienna is miles ahead of the old one in terms of styling and ergonomics. The shifter has moved from the center stack to the center console, but it's still a normal lever-style knob which we love. The dash is layered, linear and nicely two-toned with contrast red stitching like the seat upholstery. 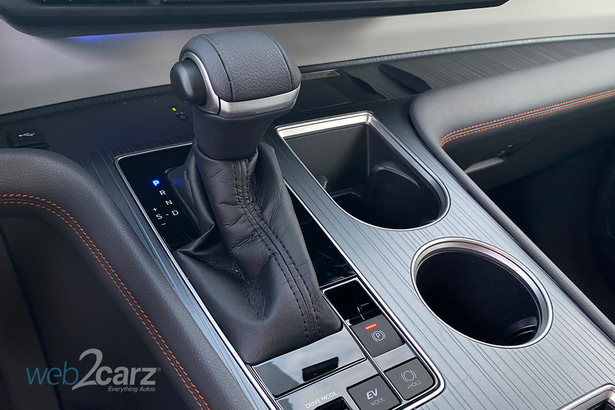 The touchscreen now sits atop the dash instead of being set inside it, so the look of the cabin is airy and open. While it's not our favorite system out there, it's far better than the old one. Infotainment control buttons flank the screen, but they should really be larger for easier operation while driving. The system's responsiveness also needs work, but navigating the menu and finding functions are easy. Thankfully, there's also physical knobs for audio, a huge plus. 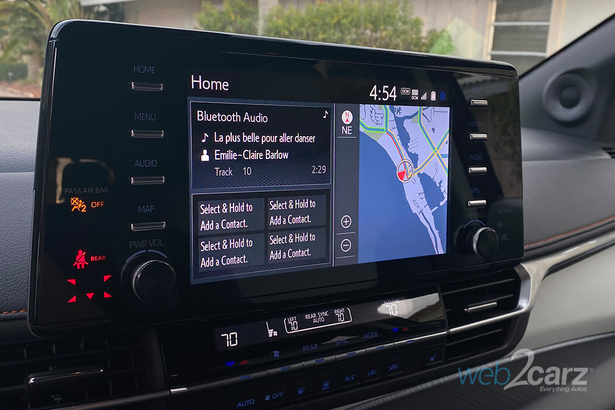 Even though the Sienna isn't the largest minivan in terms of interior volume, it has some really smart storage options that we truly appreciated on our trip. We can testify that big families (there are five of us) carry a lot of stuff on vacation: smartphones, tablets, travel mugs, toll transponders, lip balm, gum... the list goes on (and on). Well, the Sienna handled all of our small-item storage needs like a champ. 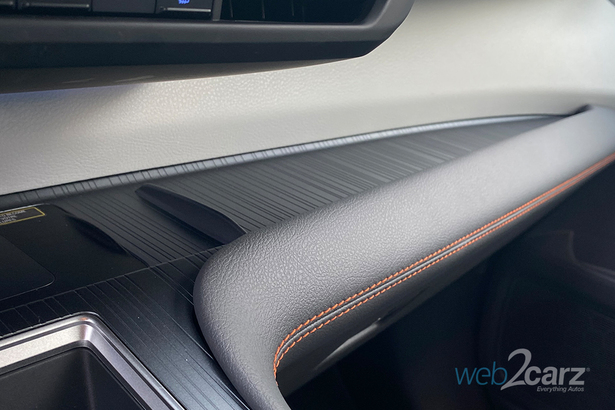 Not only is there a massive lower storage area beneath the center console, as well as a deep armrest compartment, but the Sienna also has convenient shelving that's set into the dash. Need a place to toss your stuff where you won't forget it? The shelf is perfect. There's even a lip to prevent your gear from sliding out when you hit the gas. That shelf lines up nicely with the wireless phone charger. Said shelving also has an attractive texture to it that lines up with the trim on the center console. 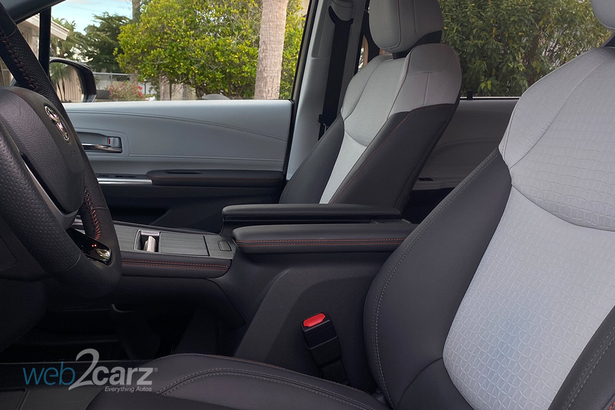 Sitting in any row of the Sienna is a wonderful experience because there's plenty of headroom and legroom. The second row has a whopping 39.9 inches, and the big third row has 38.7 inches. The second row is right up there with the Odyssey and slightly larger than the Odyssey in row three. The SofTex upholstery has an alligatorlike pattern in the inserts, and the seats could easily pass for leather. They were very comfortable, even in the heat of Florida. 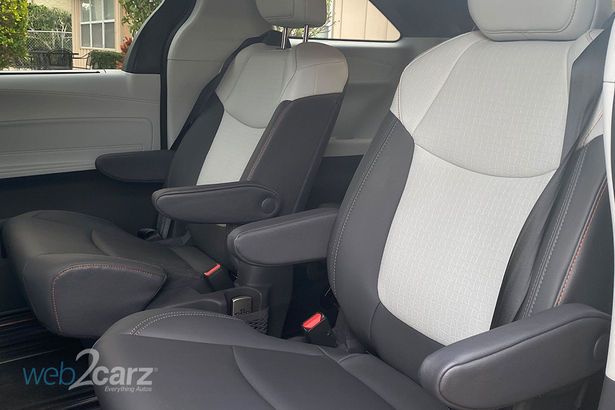 If you don't need space for eight, we suggest getting the Captain's Chairs, which make ingress and egress very easy. Our three kids had no trouble getting in and out, and the separation between the two kids in the second row made for some semblance of peace in the car on long drives. The optional rear entertainment is a must-have for vacation, and we love that little remote control pocket in the seat, which significantly decreased the chances of it getting lost. 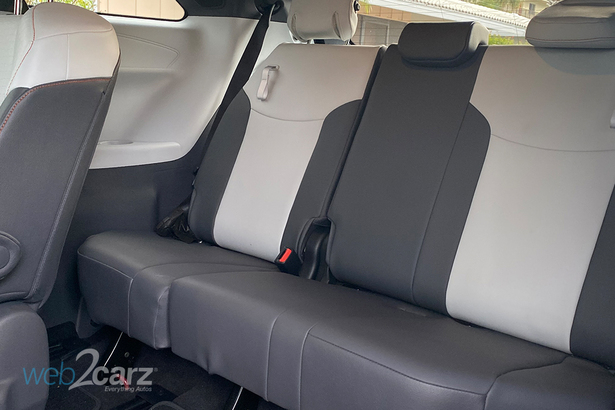 The seats in row three are comfortable, even though the cushions and seatbacks are relatively flat. They have a good amount of cushioning, but it's really the legroom that's the impressive part. Adults will have no problem fitting back here, and kids think it's a limousine. The SofTex upholstery is also remarkably easy to clean when there's a spill. Trust us, we know. It's hard to beat the interior of the Sienna when it comes to overall minivan comfort, and families should find it just about perfect.

How Does the Sienna XSE Drive? 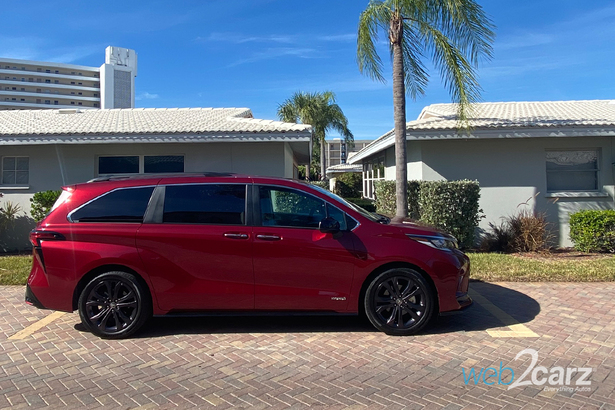 Don't look for the Sienna to roast the rubber. That's not what it's for, despite the racy exterior. Toyota erred on the side of efficiency, and that's a very good thing. Every Sienna has the same engine, a 2.5-liter gasoline engine paired with two electric motors to for a total of 245 horsepower. That's not gobs of horsepower. The Kia Carnival (gas only) has 290 hp, the Honda Odyssey has 280 (also gas only), and the Chrysler Pacifica Hybrid has 260 (gas has 287), so it's down on power compared to the competition. 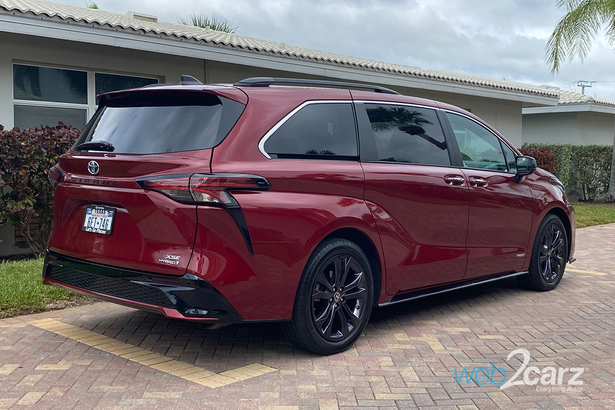 You also have to compromise some throttle responsiveness in the Sienna, but most owners won't care when they get a look at how efficient it is. We obtained 34.7 mpg in combined driving, but we dialed it into Sport mode for most of the time we were driving it. We could do without the CVT, but that's the way of the world these days when it comes to the quest for fuel-efficiency. We also like that it's not a PHEV like the Pacifica Hybrid, which means we never had to plug it in on our trip.

The upgraded sport suspension in the XSE, as well a the thicker stabilizer bars make the handling noticeably better than non-sport-trimmed Siennas. We also didn't think the ride comfort was negatively impacted. The TNGNA platform makes the new Sienna smooth and well-dampened over rough pavement and bridge gaps. It's just a very composed vehicle. 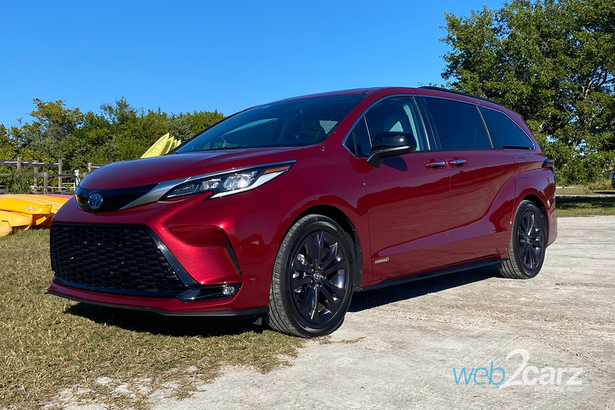 Minivans have come a long way, and the current crop of them really is impressive. Our two favorites are easily the Kia Carnival and the Toyota Sienna. In terms of overall versatility, efficiency, handling, and style, the Sienna takes it. It just looks incredible, and the fact that you can option it with all-wheel drive makes it ideal for families, especially those that live in true four-seasons weather variations.

Where it suffers is the technology. The infotainment system works just fine, but Kia's system looks and works better. The Kia can't compare to the Sienna when it comes to fuel efficiency and handling. Never has a minivan felt so taut in the corners as the Sienna XSE. We also love the way it looks. While the Carnival does a better job of looking more like an SUV than a minivan, the Sienna XSE takes the look of the minivan to new levels. It's just that good, and it's one minivan you won't be embarrassed to be seen in. 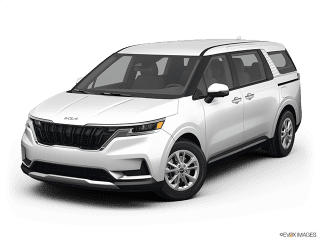