It hits the sweet spot between commuter and autocrosser 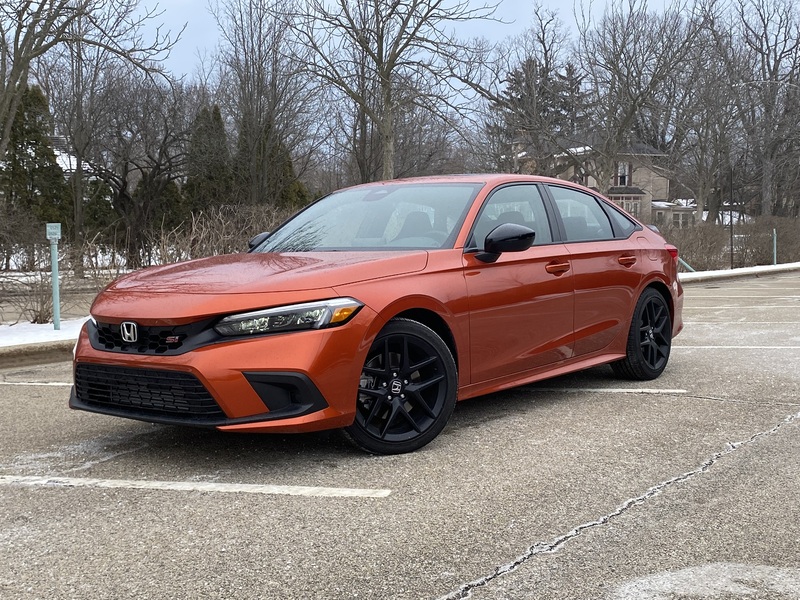 The Civic Si grows up for the better.

The 2022 Honda Civic Si has been completely redesigned, and you can tell based on how it looks. Gone is the overly-angular look of the old car that was, shall we say, rather juvenile. It looks like the new Civic Si is all grown up and ready to invite a slightly older demographic who shied away from the last Civic wholly based on its edgy styling that clearly wasn't for everybody. We got to drive the top trim Civic Si HPT (High Performance Tire) version for a week to experience the evolution of the non-Type S but still performance-oriented sports sedan. 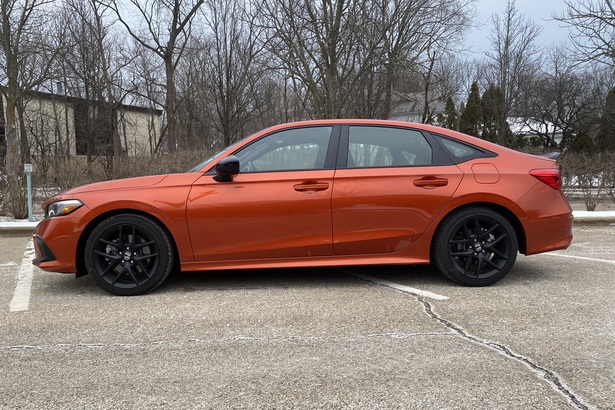 A lot has changed with the styling, but the driving experience still delivers.

Here are the specifications of our test vehicle:

The Look is More Mature But Still Fun 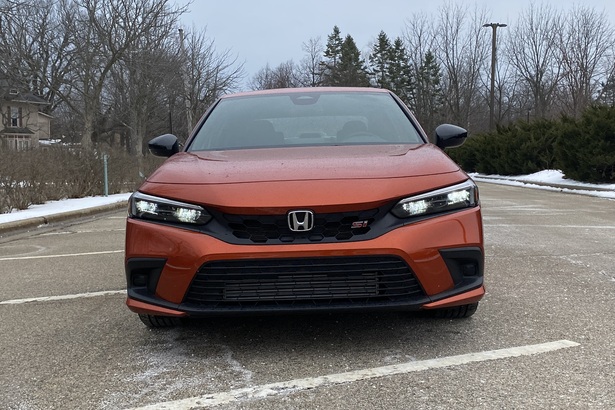 The last Civic came out with styling guns blazing, but it wasn't for everyone. In fact, most critics praised the bold effort but still found the styling a bit polarizing. The new Civic changes all that and follows in the footsteps of big brother Accord. In our opinion, it looks better than the Accord because it avoids some of the styling elements we found unpalatable while keeping the overall look more grown-up.

The crazy busy front end of the old Civic has been replaced by one that's more refined and attractive. The headlines are less angular in orientation, and the front grille is smaller. Most notably, the lower intakes don't protrude from the front fascia anymore. Instead, they are pulled back, giving the front end a more restrained but still very sporty look, especially with the black Si trim. The front of the hood is also less bulbous than the Accord, and it's handsome as a result. 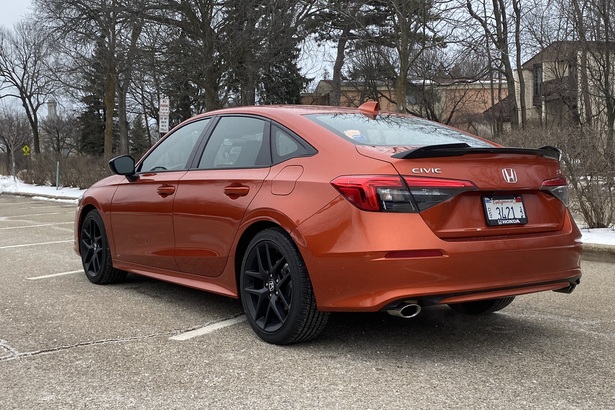 The multiple body creases have been replaced by a character line that extends from tip to toe, just above the door handles. The rising crease at the base of the doors looks great when paired with the racy side skirts that are subtle but noticeable. The side view looks much cleaner, and even the C-pillar kink looks good with the Si's black window trim. The parallel 5-spoke black wheels fill the wells nicely and match the rest of the Si's black trim very nicely. 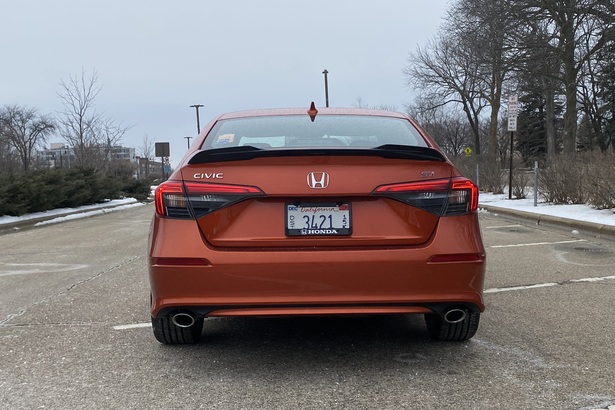 Our favorite is the back end. Everything is put together just about perfectly. The smoked taillights look great because they're bold without being oversized and the shape of them is more like a Jetta GLIs than the old Civic's which were perhaps the most polarizing design element of the last model. The way the trunk edge drops down perfectly through the taillights and into the bumper is excellent, along with the slim reflectors and round tailpipes. We love the black lip spoiler on the new Si because it has character and the proper size. Compared to the steroidal-Gundam version on the last Civic Type R, it looks fantastic.

The Cabin is Surprisingly Fresh 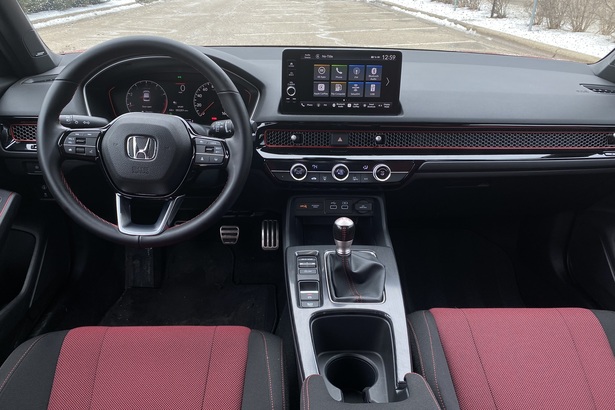 When we stepped inside the Civic, we were quite surprised by the fresh and original styling. We're not huge fans of existing Honda interiors, so the Si's almost came as a shock. From the bi-color sport seats to the honeycomb dash trim, there's just a lot to love about the way Honda approached things. It looks racy and sophisticated, at the same time. 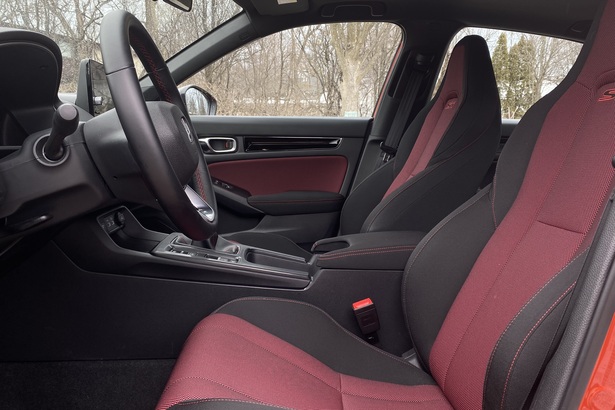 The sporty bucket seats have great bolstering, and cushioning is just right. We like the fact that they're fabric and quite comfortable. The bottom cushion has the right thigh length, and the back is broad enough to accommodate larger folks. I usually have a hard time getting comfortable in smaller sedans and hatchbacks, but the Si is just right. 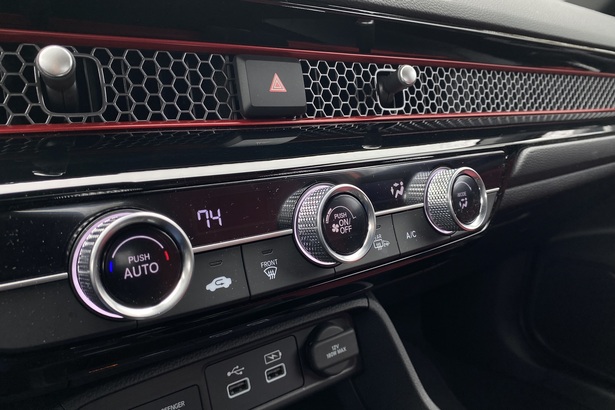 Take a look at the way Honda integrated the HVAC vents and the dash trim. The adjustable vents sit behind the honeycomb trim, and the vent adjustment knob peeks out from behind it oh-so subtlety. The racy red trim that frames it looks great, too, and adds a dose of color that matches the seat insert.s The climate control knobs are nice and big with knurled metal-like trim and clean readouts. Every Honda model in the lineup should get these. 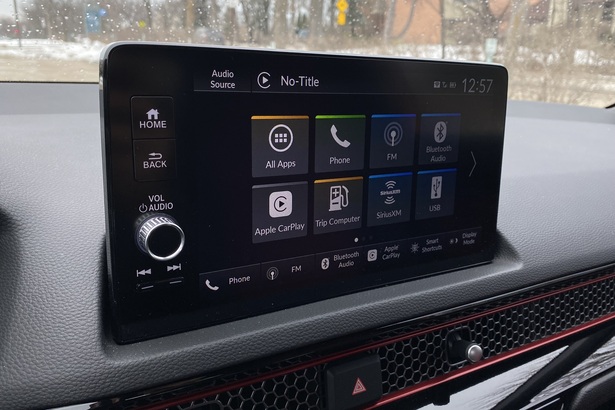 We're still not huge fans of Honda infotainment, but this system is the best one so far. The audio knob matches the climate controls (at least in terms of looks and grip, if not size). Wireless Apple CarPlay and Android Auto mean you can bypass most of the OS's interface for audio, phone, messaging, navigation, etc. The Honda system is decent, but it's still not our favorite. At least the menu bar at the base makes things easier. The screen is clear and sits nicely atop the dash. 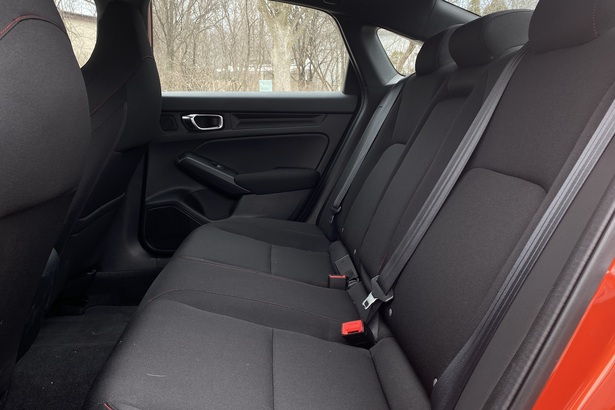 The back is surprisingly roomy with 37.4 inches of legroom, plenty for tall adults to sit behind tall adults. It's too bad the cushion and seatbacks are on the flat side, and the two-tone colorway doesn't carry over to the rear seats, which would've been a nice way to tie things together. There's not much to complain about, though, because the Si's interior really is a sporty, attractive, and comfortable place to sit.

It's a Superb Sports Sedan 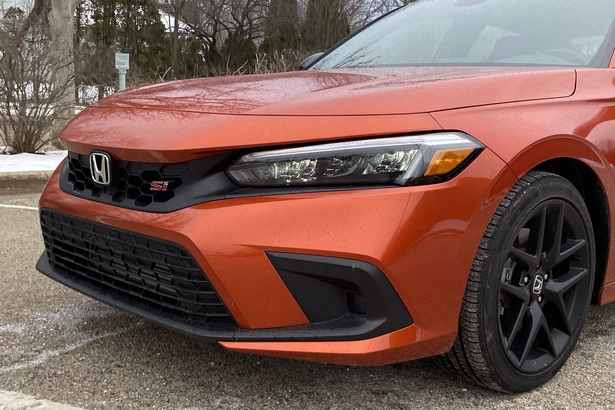 The Civic Si is actually slightly down on power compared to the last Si, and it's a tad slower 0-60. It drops 5 horses from 205 to 200 from the turbocharged four-cylinder, and the weight is slightly up from 2,889 up to 2,952. Torque stays at 192 lb-ft. This Si is actually better to drive. It's smoother, more tractable, and handles better than the last car. It seems Honda has ironed out some things in its driving manners, and it feels more civilized than the last Si. We suppose the driving experience is commensurate with the Si's more mature looks. 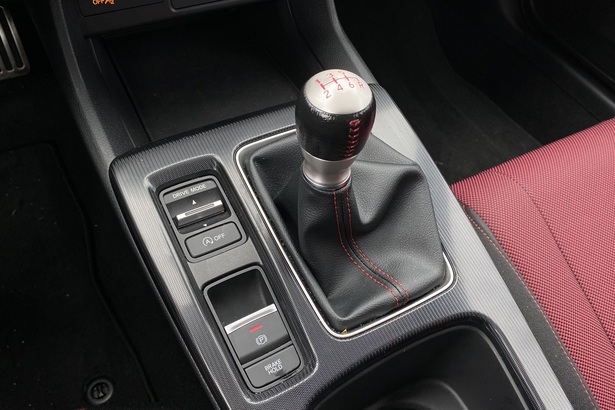 Although some have stated that they love the six-speed manual's action, we're not fans of the position of the shifter. It sits a bit high and forward for our liking. The throws are decently short, but we'd love to see something like the Honda S2000's short shifter in the Si. We know that's wishful thinking, but that would make for quicker shifts, and a position closer to the armrest would be more comfortable. We don't even have short arms. At least the precision of the shifter is very good. We had little trouble roping through the gears quickly. 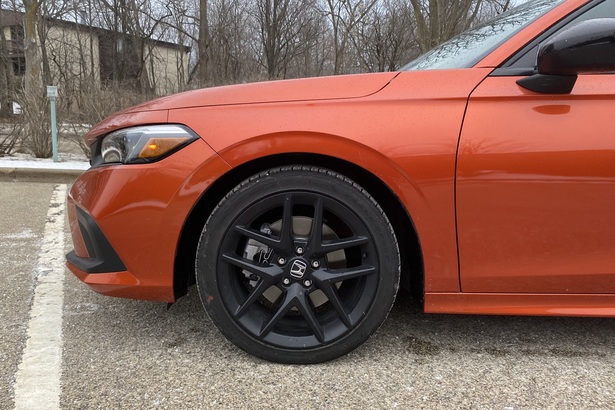 Two other complaints about the driving experience that are totally not deal-breakers. First of all, the clutch action needs work. Engagement is difficult because of the vagueness of the clutch, and that makes it hard to drive as quickly as you'd like. The brakes also feel a bit on the side of inadequacy. We drove it hard and braked hard for a number of turns, and it felt like there was some fade coming on. We can't imagine it would be very good on the track after a handful of laps. One more positive note is the fact that the light steering has good feedback, despite the lack of effort. Turn-in is very quick and precision is excellent.

Overall, we found the 2022 Honda Civic Si to be a thrilling daily driver. It might not have impressive power numbers, but most people can't exploit 300+ horsepower on any given day (legally speaking). You can drive the Civic Si at 7/10ths without breaking the law, and it's still very fun and rewarding. The fact that it now looks truly handsome and the interior is similarly wonderful make the Civic Si a tremendous value for the sporting-minded.