Could this thing look any less exciting? 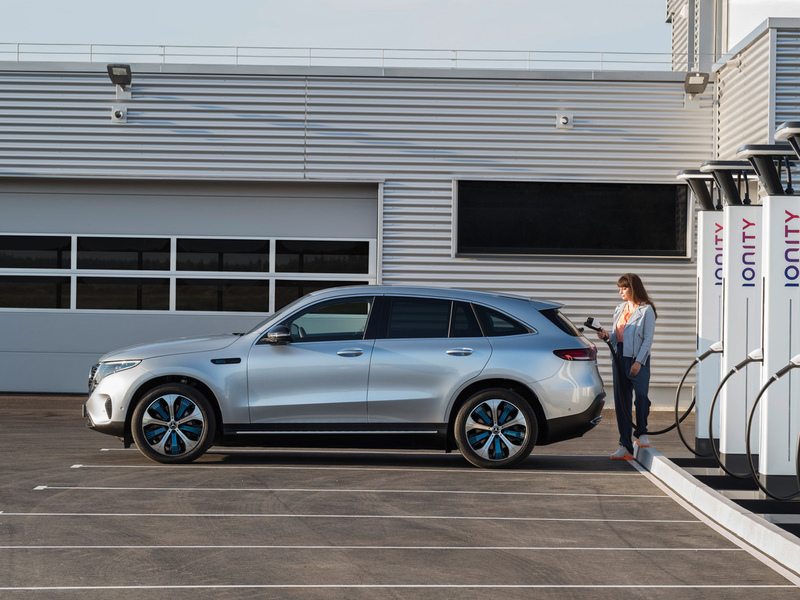 The EQC charging up. It could use some design juice. (images: Mercedes-Benz)

Electrification is the future of automobiles, as far as current evidence is concerned. Automakers are spending billions to plan for an electrified automotive dominated world within the next twenty years, and Mercedes-Benz's new EQ electric line just unveiled its first car, the EQC crossover EV. It shows us what the future looks like today, and despite the fact that it's infused with tons of tech, it just doesn't make the future look very good in terms of aesthetics. Just look below. Part wagon, part SUV, hearse is what we see. Ick. It looks similar to but less exciting than the EQ Concept. 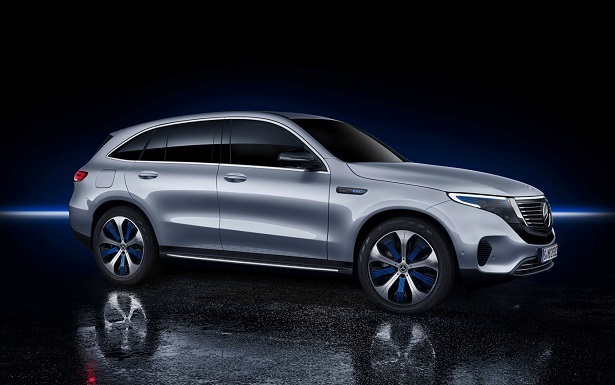 Maybe this is just a bad angle. Then again.

Of course, it's meant to look different from all other Merc vehicles, and coloring highlights inside and out set it apart. The front end sports a large grille with flanking headlights that taper into the bottom edge of the grille. On some trims, the wheels get blue accents to show its electrified nature. The shape, itself, is a bit dowdy and looks like a conventional crossover, not altogether different from the GLC. In some markets, the EQC's huge tri-star logos light up, and LEDs in the grille unite the LED running lights. It's all very showy. 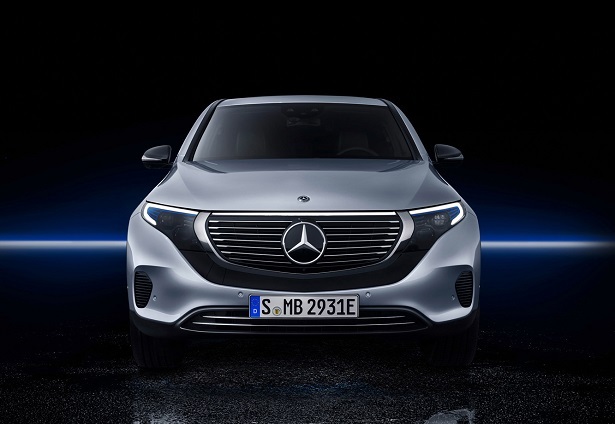 The Electric Art models have the six-bar grille that provides presence.

There are two lines in the EQC's repertoire, Electric Art and AMG, and there are distinctions between the two in the upper and lower grille with varying numbers of horizontal bars and piano black and chrome trim. Electric Art ends up looking more futuristic and sophisticated, while the AMG trim errs on the sportier side. We don't particularly like either one, but we can appreciate the need for differentiation. 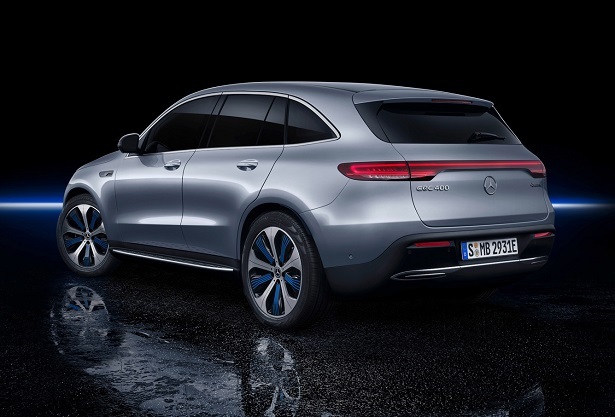 is an unconfirmed 279 miles. More details will emerge and, of course, an EPA rating will follow. Underneath, there are two motors. Total available system power is 402 horsepower and 564 lb-ft of torque. Mercedes says the EQC blends the motors' power on an ongoing basis depending on desired performance and efficiency levels. 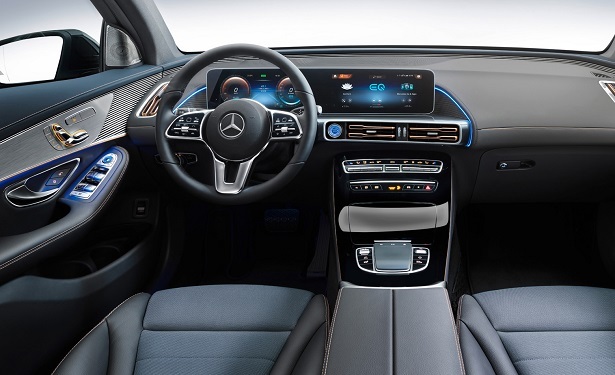 Take note of the fancy gold trim on the doors and AC vents.

Inside, there are large dual rectangular 10.25-inch media displays unified in a single wide display that floats on the dash where audio and visual controls reside. There are also some fancy gold accents on the HVAC vents and seat adjustment controls. There's a nifty navigation system that optimizes routes for maximum electrified range and even routes you to a charging station when is running low. You can also give it voice commands by sayingHey Mercedes". It supposedly also responds to natural speech instead of just direct commands. Tell it that you're cold, and it will raise the temperature. 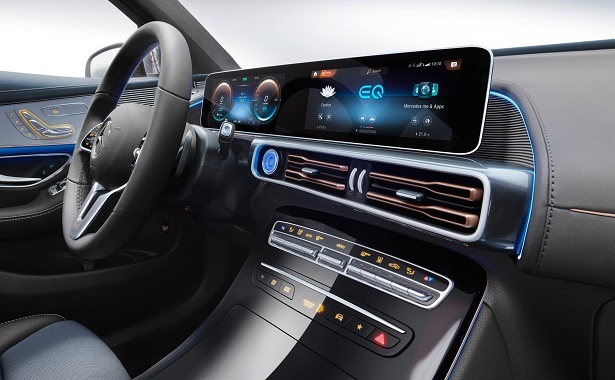 That's not a concept car interior, folks. It's production level and quite pretty.

The lithium-ion battery is modular: two of them have 48 cells, the other four have 72 cells, totaling 384 cells and kWh capacity. This puts the EQC on par with other upcoming EV crossovers: the Audi e- SUV will have 95 kWh, while Jaguar's electric i-Pace has 90 kWh. 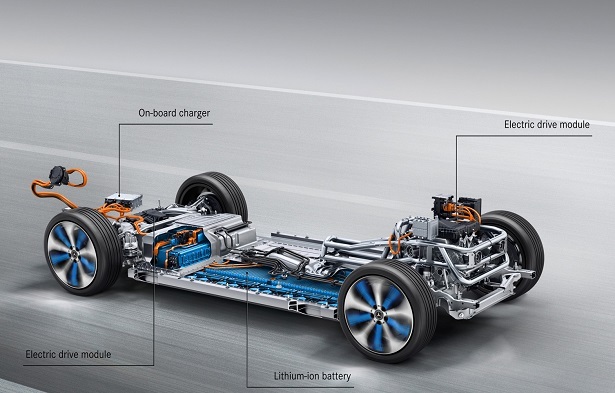 The EQC will also get a slew of safety features as with all Mercs: Active Distance Assist Distronic, traffic jam following, Active Brake Assist, and an available Driver Assistance Package with improved brake assist, Evasive Steering Assist, Pre-Safe Plus, and Exit Warning Assist. None of this should come as a surprise since most Mercs already get this high level of safety tech. 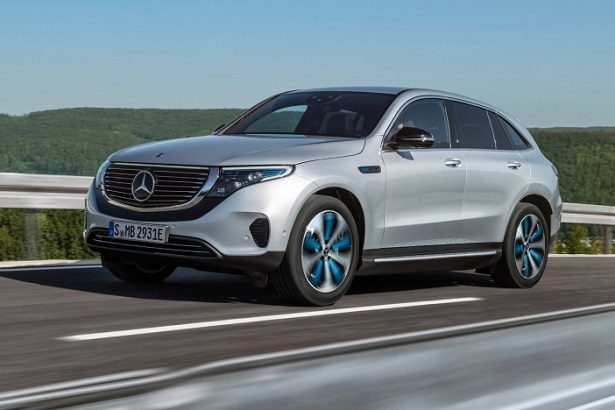 Of course, there will be a bit of wait for us before we see the EQC 400 (the only model we know of so far) with dealers getting the vehicle in 2020. There's no data on pricing yet, but expect both trims to be available for sale here. We just wish Mercedes had spent a little more time and effort developing a unique design that's still practical without looking so boring, especially in light of the i-PACE and Audi e-Tron SUV's stunning looks.