How to make a really old SUV new again 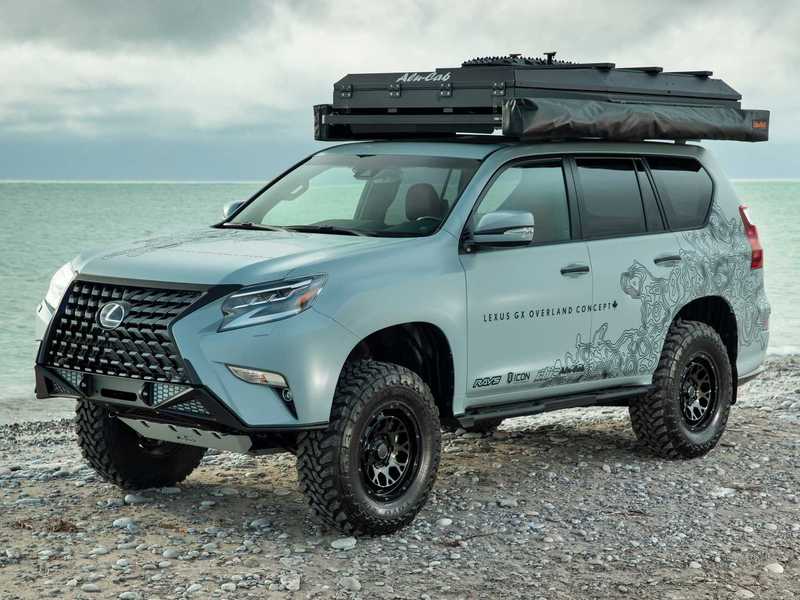 The one GX that might see more than suburban streets.

We recently reviewed the big and antiquated Lexus GX 460, but it seems the brand isn't done with it yet. Toyota of Canada just built one super-awesome Overland Concept from the body-on-frame SUV for the Montreal International Auto Show, and it's just the kind of interpretation we'd love to see here the states. It's so cool, we'd actually consider buying one. 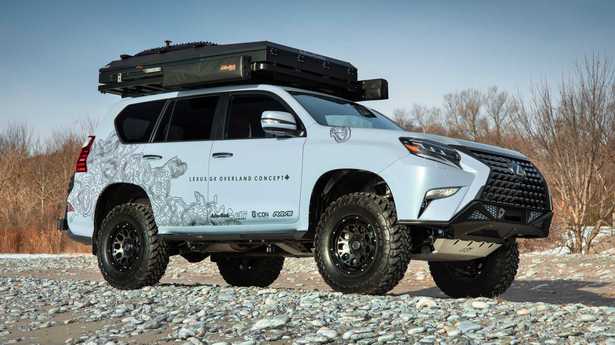 The GX Overland gets everything you might need to go for months (except a toilet).

For those of you who are unfamiliar with overlanding, the term basically means journeying over weeks, months, or even years in a capable vehicle where it doubles as your accommodations, kitchen, recreation, etc. The GX Overland Concept looks totally up to the task, and it makes the GX look positively modern (at least from the outside).

The base vehicle is a rather expensive 2020 GX 460 with a top-notch Executive Package. The GX 460 for 2020 does get some nice visual tweaks that improve the front end, especially. A new grille pattern and revised headlights and foglights help modernize it, and Overland treatment ups that quotient even more. 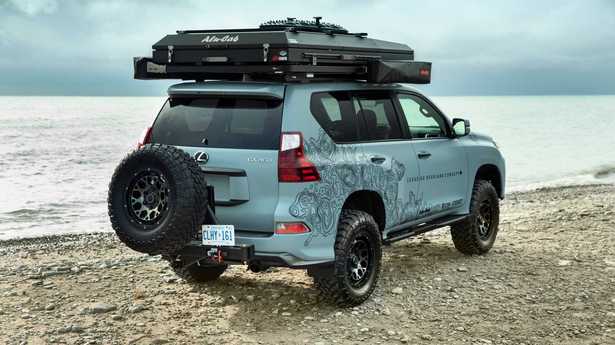 First of all, the GX Overland Concept gets a unique paint shade in light blue, an interesting choice. It looks cool, but we would've opted for desert tan or forest green to look a bit more outdoorsy. The paint gets helped out by a topographical map graphic that actually does a great job of hiding the awkward rear haunch shape and the newly styled but still strange taillights.

The SUV also gets big beadlock wheels shod with Toyo off-road rubber and a full-size spare on the swing-arm, side-opening tailgate. Toyota of Canada also increased the GX 460's suspension height and added tough rock rails and bona fide skid plates to take on more punishment and to protect the body and the tender under body bits. Since the GX is already very capable off-road, we can only imagine how the transformation helps. 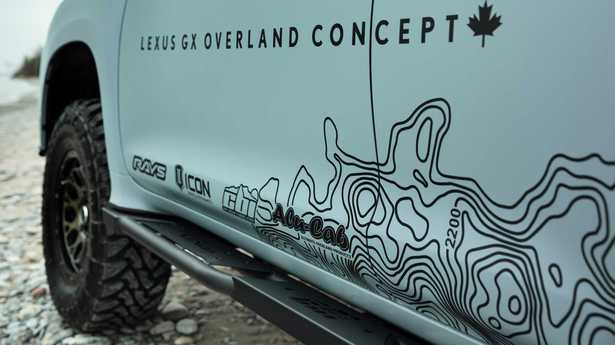 The GX Overland also gets Multi-Terrain Select that can adapt to driving conditions (mud, sand, rocks), Crawl Control to manage low speeds off-road, a Torsen limited-slip center differential, and a two-speed transfer case. Thankfully, the GX for 2020 now gets he Lexus Safety System+ as standard equipment and comes with features such as lane departure alert, a pre-collision system with pedestrian protection, radar cruise control, and automatic high beams. 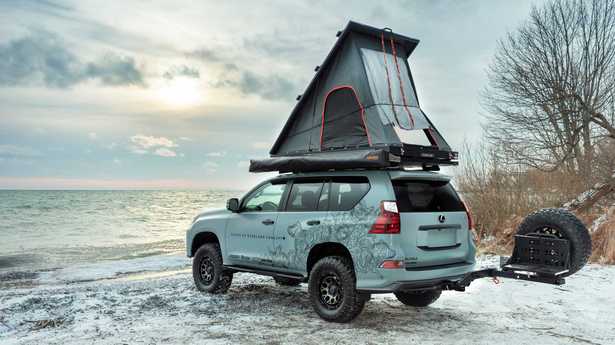 Don't fold the tent while your companion is still sleeping.

If you're at all concerned about where you'll sleep in the great outdoors, you won't be relegated to reclining in the front seats or laying across the rear bench seat on top of seat belt receivers or hard LATCH anchor points. The GX Overland gets its own deployable tent that sleeps two and stays safe on the vehicle's roof. There's also a full awning, so you can sit in the shade and a shower cube so your traveling companions won't want to leave you mid-journey. 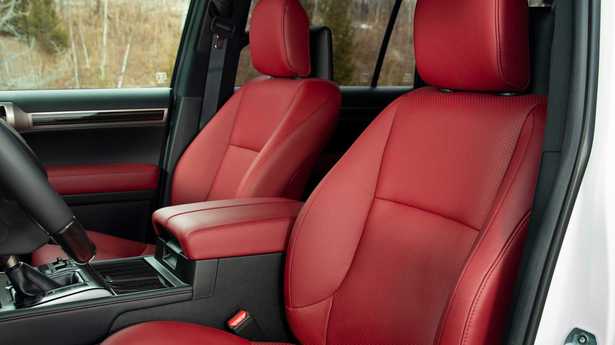 The interior of the GX Overland Concept doesn't get much in the way of changes, unfortunately. The color choice inside is even more confusing than the exterior. Red leather. Yep, the leather hue that's typically relegated to roadsters makes it into a vehicle that's intended to see a lot of dirt and dust. We figured the would've at least clad the seats with rugged and protective fabric that also had the topographic pattern on it.

The antiquated center console is still there with its weird silver plastic shroud and buttons. At least the screen size is bigger, and the physical knobs and buttons work well despite looking rather dated. Rear occupants ironically get entertainment screens to distract them from the beauty of nature. 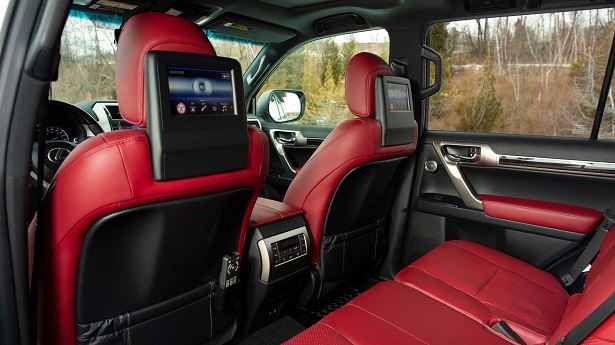 Get away from it all by binge-watching TV shows on red leather seats.

Nothing under the hood has changed. The potent V8 from the stock GX 460 is the same with 301 horsepower and 329 lb-ft of torque, more than enough to make it over hill, dale, and dunes with ease.  The GX's six-speed automatic and full-time four-wheel-drive system go unchanged, as well.

To our chagrin, the chances of Toyota building a production version of the Overland Concept is about as likely as them making an attractive Prius. It could be the kind of vehicle that extends the life of the GX 460 beyond its already Methuselah-like years.

Interested in buying a Lexus GX? Check out our latest review below: 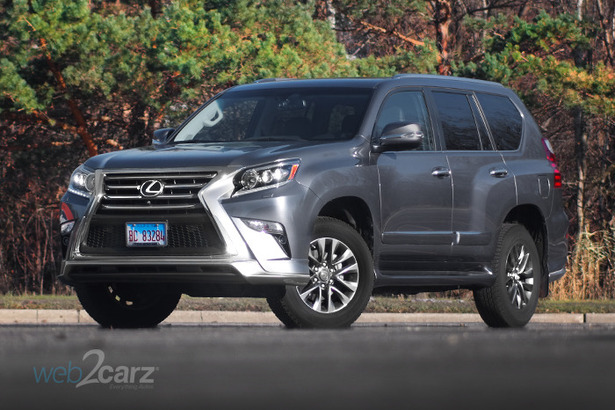