Now, the inside matches the outside 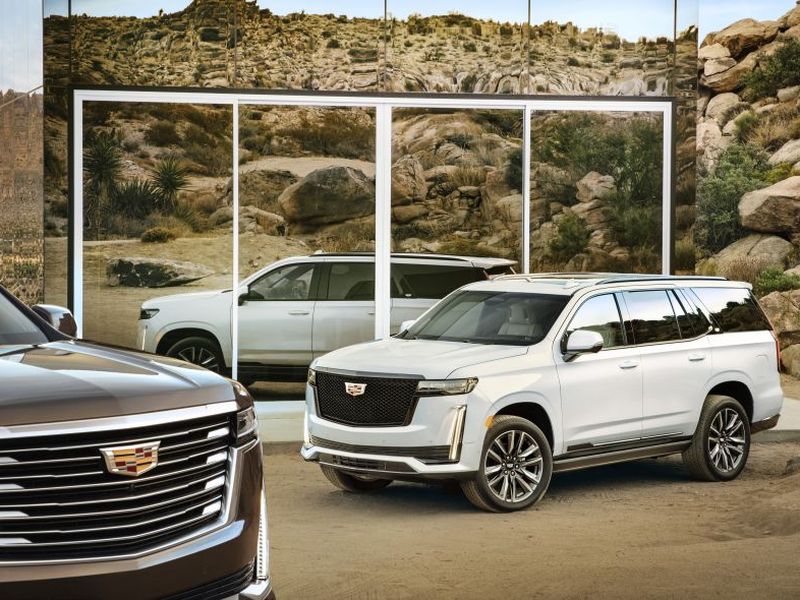 Cadillac just pulled the covers off its totally redesigned 2021 Cadillac Escalade in Los Angeles, just before the Academy Awards. Its debut is timed perfectly with high style Hollywood, and this time it looks like the brand got the formula right. More sophisticated, more opulent, and infused with great technology and improved materials, the new Escalade will be vaunted by those who crave space and street cred. 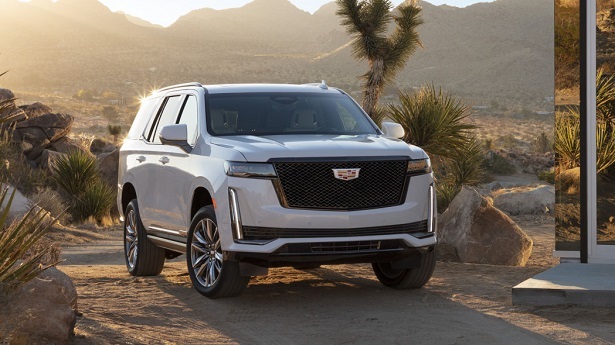 Ever since the big Cadillac Escalade hit the market back in 1999, it's been a solid seller for the American luxury brand. Thanks to rappers who slapped huge, shiny chrome rims on it and put it in music videos, it's been a staple for the affluent. Throughout its first three generations (and to some extent, its fourth), it just hasn't been all that great inside. Poor ergonomics and space,  as well as mediocre tech and materials have belied its rather hefty price ($75,195 base MSRP for 2019). Oh, and then there was the hugely embarrassing Escalade EXT sport pickup truck that no one wanted to be seen in. That shall not be spoken of again in our presence.

Take a look at that new, crispier sheetmetal that mimics the best-selling XT5 and even the CT6 sedan. Smooth lines but the right amount of angularity give it refinement, while bigger details like the huge grille and vertical foglights and taillights make the Escalade stand out. The blackened pillars and the slight uptick in the trailing edge of the passenger door give the Escalade more visual fluidity than before. It looks more upscale than ever, and it doesn't come across as overstyled, which we love. 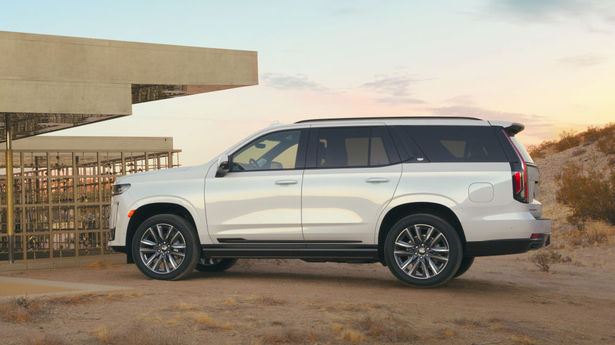 The wholly new luxury SUV is based on the new Chevy Tahoe and the GMC Yukon with their fresh and welcomed independent rear suspension setup that's finally up to speed with the likes of the Lincoln Navigator. The result is a better ride and more space. The result is quite impressive: 10.4 inches of additional rear legroom in the third row and 10.3 additional cubic feet of cargo space behind the third row in the upright position. That's huge for both passenger comfort and hauling.

It also gets available next-gen magnetic shocks and new air suspension, and it gets powered by the same, powerful 6.2-liter V8 or the 3.0-liter turbo-diesel inline-six, both matched with a 10-speed automatic transmission. Other road-friendly features include optional (and excellent) next-gen Super Cruise semi-autonomous system, an eLSD system that varies the torque to each wheel and can lock out the torque across the axle. 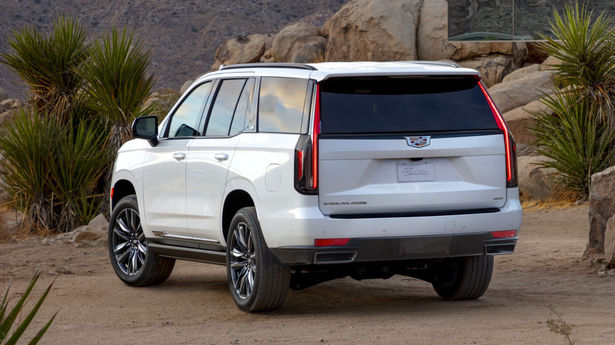 We love the lack of chrome on the new Escalade Sport.

The interior of the new Escalade is where the biggest changes have taken place. It looks nothing like the last interior, and thankfully so. The 2020 Escalade's interior lags behind competitors, even the base Ford Expedition looks better inside. The new Escalade gets totally reworked and boasts a huge set of displays and a truly expansive center console that rises up to the center stack. Gone is the stupid Cadillac VUE system that pretty much everyone in the automotive industry lamented. The idea of making the center stack look like the grille has been properly kicked to the curb. Who thought that was a good idea, anyway? 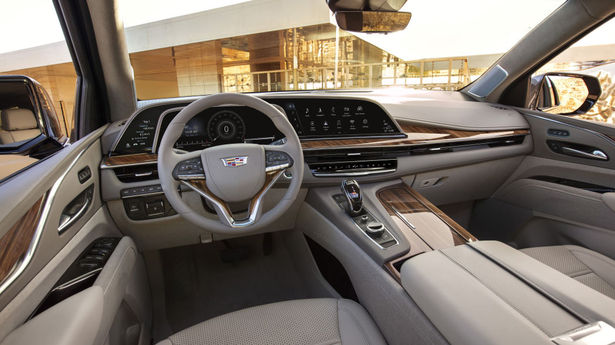 The rich cabin ushers in a new era for the brand.

Easily the most interesting aspect of the interior is something we've never seen in a production vehicle before: a tri-screen setup that was only present in the Cadillac Escala concept. It's a complex but beautiful conglomeration of a main infotainment screen (16.9 inches), a digital instrument cluster (14.2 inches) and , and a smaller third screen to the left of the gauges (7.2 inches). And get this, they're the first OLED displays used in a vehicle. Not only are they vivid, but they're also remarkably thin. 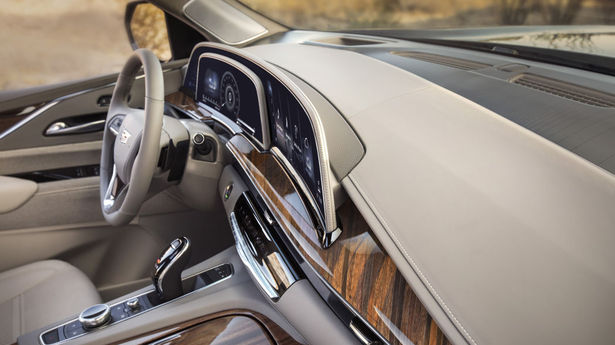 Talk about thin. Just look at the side view of the new triple OLED screens.

More good news is the fact that there's a shift lever instead of buttons, an infotainment control knob, and physical climate control buttons in a line underneath the attractive LED climate display. You can get quilted and perforated leather/fabric seats, second-row captain's chairs, and there's ample space for up to eight people with a bench configuration for row two. 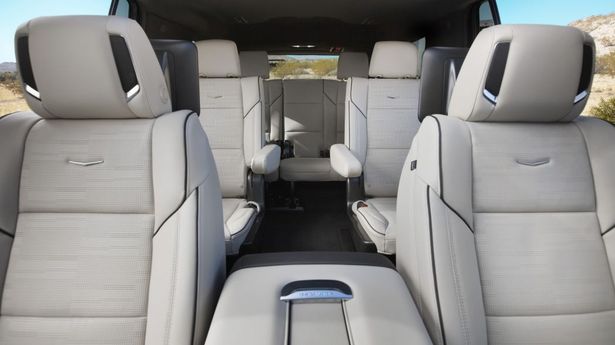 The leather/fabric combo seats add another level of refinement to the new Escalade.

Cadillac has commissioned AKG to create a custom audio system for the Escalade. The base system has a whopping 19-speakers, but you can upgrade to a 36 speaker (what??) Studio Reference system. It should prove to be one of the best systems you can get in any vehicle at any price. There's also an available rear entertainment system so the kiddos don't get bored with all the opulence.

For those who like the bling, Cadillac is retaining some of the more shiny bits new Platinum Luxury trim (it gets a massive crossbar grille), while the Sport trim gets black bits all over for a more aggressive appearance. There are also Luxury and Premium Luxury trims, which are more in line with the new XT6 SUV. Pricing hasn't been announced yet, but expect it to be north of the current $75K mark. The new Escalade will start selling later this year as a 2021 model. It should be worth the wait.