We bet this will make the competition pretty nervous 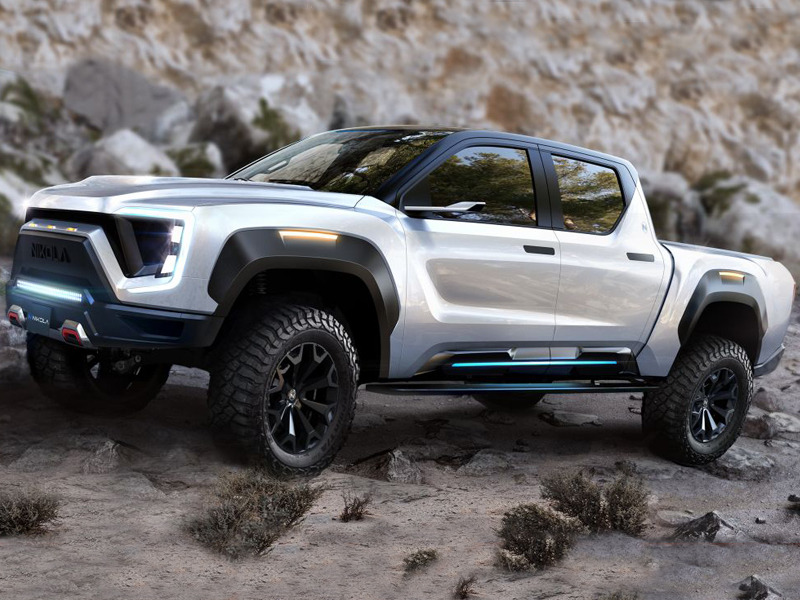 Right now, the Badger is just a rendering. A very cool rendering.

It really does feel like a new electric pickup drops on the interwebs every month. The Rivian R1T, the Tesla Cybertruck, the Bollinger B2, the GMC Hummer EV, and now we get the Nikola Motor Company Badger. Yes, the Phoenix, AZ-based hybrid vehicle company wants in on the now hot electric truck game (and yet unrealized with a single production model). The Badger has all the looks and specs of a proper competitor in the burgeoning segment. Let's take a closer look.

How the Badger is Different:  Hydrogen 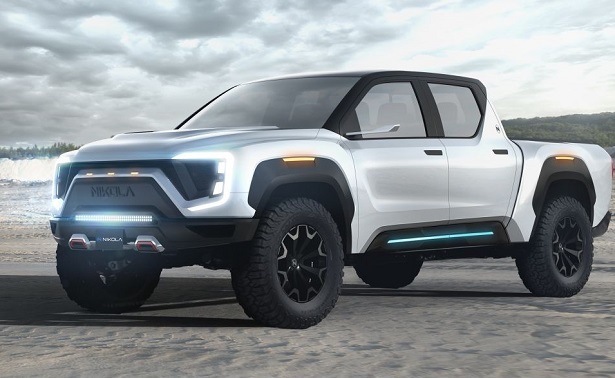 Every other electric pickpup boasts something unique besides just electric power, which is impressive enough. The Cybertruck has a bed that closes with a louvered cover (and may come with its own electric ATV!). The Rivian R1T has this that allows it to turn 360 degrees in place. The Bollinger B2 has a passthrough to the front trunk to allow really long items to be transported. The GMC Hummer EV has, well, 1,000 horsepower and that unmistakable ethos.

So, what does the Badger offer? How's 600 miles of hydrogen and electric-powered range? Yes, it's the only EV pickup truck that will make use of 100% clean emissions (water vapor and oxygen). Right now, there are only three vehicles for sale that use hydrogen: the Toyota Mirai, the Honda Clarity Fuel Cell, and the Hyundai NEXO. Not a single one of them is a truck. The Badger will use a fuel-cell stack that doubles the range by using the "battery-blend" button. The boost in range is easily its biggest selling point, overcoming any range anxiety owners might have initially. Even on pure electric mode, the Badger offers 300 miles of range. That's not something that can be overstated for those who want to switch over from gas.

The Badger Will Be Supercar Quick 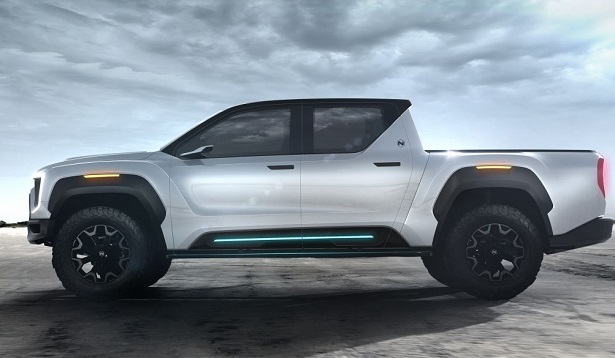 The power of two electric motors driving four wheels doesn't just mean awesome levels of traction, it equates to serious torque at all four corners. Pretty much every electric pickup truck will be as fast as sports cars and even some supercars. The Badger promises a 0-60 time of only 2.9 seconds. That's faster than a C8 Corvette Stingray and as fast as a $335,000 Ferrari 812 Superfast.

In terms of actual power, it's essentially 455 horses in continuous operation and up to 906 horsepower at peak usage. Torque is a monstrous 980 lb-ft or only about 70-shy of a 2020 Ford F-250 6.7L V8 Diesel. Those are not numbers to joke about, and the specs are up there with the likes of the competition. The Tesla Cybertruck, for example, will have 800 horsepower and 1,000 lb-ft of torque. You have to pony up to play in this segment, and it looks like the Badger will hold more than its own.

The Badger Will Be a Real Pickup Truck 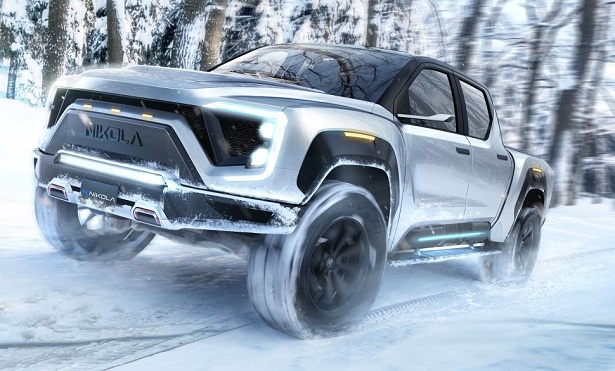 Nikola claims the Badger won't get hampered by cold weather like other e-trucks.

Nikola wants to be the EV pickup truck you take to the job site or use for daily hauling duties. In terms of capability, the benefits of hydrogen seem to be in line with the Badger's intentions. Nikola claims, "This electric truck can be used for work, weekend getaways, towing, off-roading or to hit the ski slopes without performance loss. No other electric pickup can operate in these temperatures and conditions."

The Badger should be able to handle subzero temps without affecting its performance or range, and that's a huge plus. What's more, its 5-kW power outlet can be used to power external equipment "for approximately 12 hours without a generator." It will tow 8,000 pounds, climb 40% grades, and even accelerate from a standstill on a 30% grade without stalling.

In terms of space and cargo, the Badger capitalizes on a conventional pickup truck layout with room for five, a 61.5-inch bed, and a 231.8-inch body of which most of the space is taken up by the large crew cab setup. It might not lay claim to a long bed like the Ford F-150's available 96-inch bed or the Ram 1500's available 76.8-inch version, but it should provide nearly the same dimensions as the Chevy Colorado's short bed.

The Badger's Interior is Unconventional 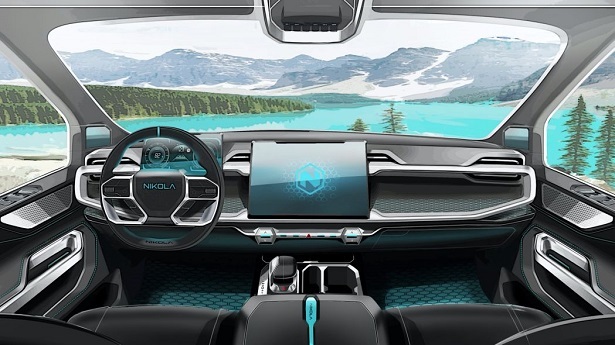 It's just a rendering for now, but this is one futuristic cabin.

Nikola doesn't plan to go all conventional on you for the Badger's interior, but it will be utilitarian and attractive at the same time. The cabin gets robust and high-grade materials, as well as modern styling. The huge center touchscreen will operate many of the Badger's functions, and there's a second instrument display screen in front of the driver. It looks like a large center console, open dash storage, long center console side tunnels, and an armrest will handle the bulk of front-row storage duties. It also appears that there might be monitors for the side cameras, which oddly don't show up in the rendering of the interior.

There's a traditional gear shift lever, but we're guessing it's only for drive and park. Up top, you can see control switches above the windshield, probably for towing controls. There's not much else we can deduce from the rendering, but the Badger should be ready for passengers and gear like the competition should prove to be, as well.

Can Nikola Pull it Off? 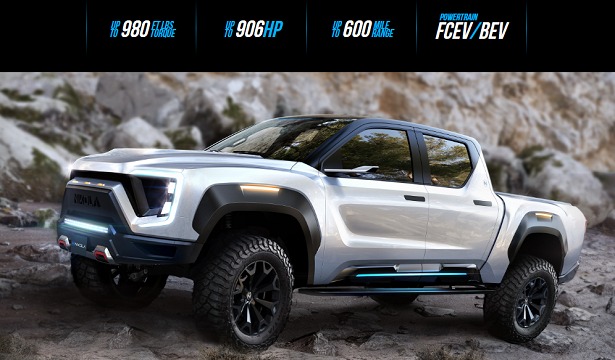 Since the brand has yet to build an actual road-legal consumer vehicle, they plan on working with a yet to be named OEM partner. They stated that the "Badger will be built in conjunction with another OEM utilizing their certified parts and manufacturing facilities". If this makes you skeptical, keep in mind that the company was able to partner with Iveco Trucks in Europe to build the hydrogen-electric Tre semit truck for commercial use.

The brand plans on building a factory in the U.S. to build the Badger in 2020 and also form a network of 700 hydrogen stations across the nation. Information on the new truck, specifications, build dates, etc., should be released at Nikola World 2020 at their HQ this fall. Nikola Motor Company claims they will actually have a Badger prototype on hand to test, and it's even accepting reservations in limited numbers right now.