It won't break the bank or speed records

The Ami is small in size but mighty in purpose.

What's smaller than a breadbox, electric, and crazy affordable? It's the new Citroën Ami two-seater EV that might just be the answer to the environmentally-conscious young car buyer with a seriously limited budget. The French automaker just pulled the covers back on their bite-sized coupe that's as cute as it is eminently practical

It doesn't even need a special cord/plug. Wall outlet, baby.

This little plug-in will cost owners the equivalent of $22 U.S. dollars a month. No joke. Although you can't buy one here in the States, it's just the kind of thinking that runs counter to the insane near-$40K average new car price these days. That's less than the price of a month's worth of Starbucks Coffee, actually about a week's worth. Let's take a closer look at this brilliant answer to the question just about everyone has asked. 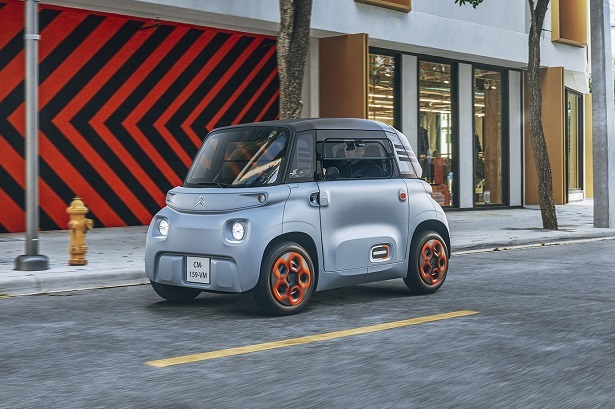 Since the Ami is only meant to transport two people and has no conventional gas engine, it doesn't take up much space. As a city car, it doesn't have to be large when it's really designed for two people for short-range trips and minimal cargo capacity. For the sake of comparison, the current Fiat 500 hatchback measures in at about 12 feet in length. The Smart ForTwo that's no longer sold in America was even smaller than that, measuring just under nine feet in length. In fact, it was the shortest car sold in America. When you pulled up next to it, you wondered where the occupants put their feet. Well, get this. The Ami is a foot shorter than that.

The two doors sit smack in the middle of the body, so it might be hard to tell if it's coming or going if you're looking at it from the side. Citroën managed to keep it from looking utterly silly (like the Smart ForTwo) and instead gave it a fun, chunky look and a stance that prevents it from looking like a dumpy toy.

IT'S SLICK BUT PRACTICAL INSIDE 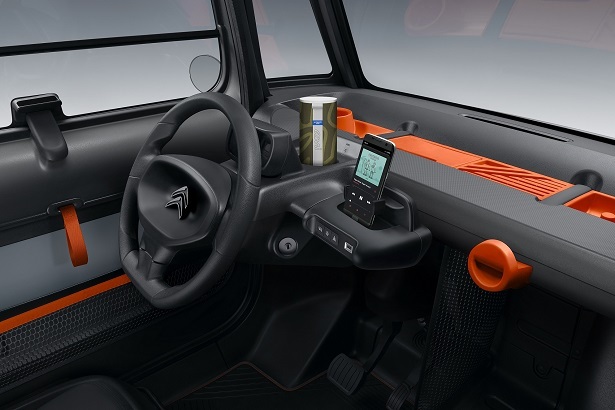 Step inside the Ami, and you just might be surprised by its level of utility. It might not have air conditioning, but it does have some great flip-up windows for good airflow (plus, they look pretty cool, kinda like race-car windows). There is heat, however, and there's actually quite a bit of small-item storage via trays, cubbies, and cupholders.

There is a small LCD display screen just in front of the steering wheel for driving data, and you can dock your phone to charge it, as well as stow a portable Bluetooth speaker. Any music, phone calls, navigation, etc., will have to be performed via your smartphone, which people do already anyway, especially younger folks to whom the Ami would cater to. The decor is a mix of grey, black, and orange that matches the exterior colorway. It's fresh, attractive, and fun.

DON'T TAKE IT ON THE EXPRESSWAY 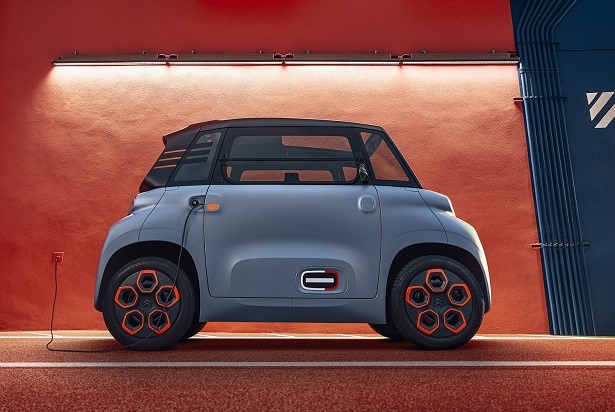 If you're looking for a fast EV, get a Tesla Model S or a Porsche Taycan. The Ami is not the vehicle for you. It's actually not categorized as a car in the technical sense. The Ami's top speed is just shy of 28 mph, or about as fast as a pro-cyclist. It fits in the light quadricycle segment, meaning anyone 14 years of age or older can drive it without a license.

There's a tiny 8-horsepower electric motor mated to a 5.5kWh lithium-ion battery under the floor. THe range is actually not bad at all, about 43 miles on a single charge. What's more, it can be plugged into a standard 220-volt outlet and public charging stations.

What the Ami provides is safe, fun, and covered transportation (instead of a similarly-priced electric scooter rental) where you can actually take a passenger and store stuff, too. Citroën will start taking online orders on March 30, and cars will be delivered to buyers' doorsteps in June. We love the idea and hope something similar happens in crowded urban areas here in America.