The class leader has thought of just about everything 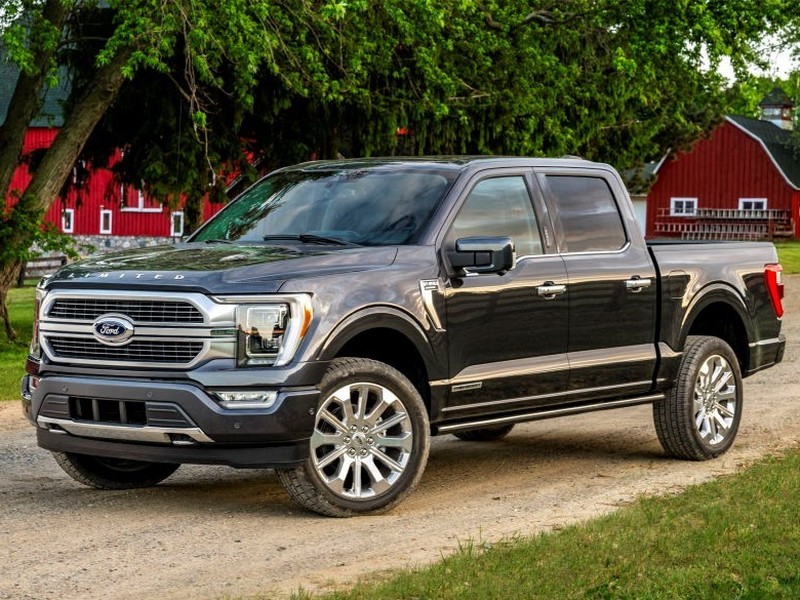 The only thing it can't do is fly, apparently.

The world has been waiting for the latest version of the Blue Oval's cash cow, otherwise known as the F-150 light-duty pickup truck. The F-Series trucks quite literally are the best-selling vehicles now and have been for decades. Now, the 14th-generation truck is here, and it's worth a serious look as to looks to crush the competition, namely the Chevy Silverado and the Ram 1500. The new truck packs in more than you'd think, and some of it is mindblowing. 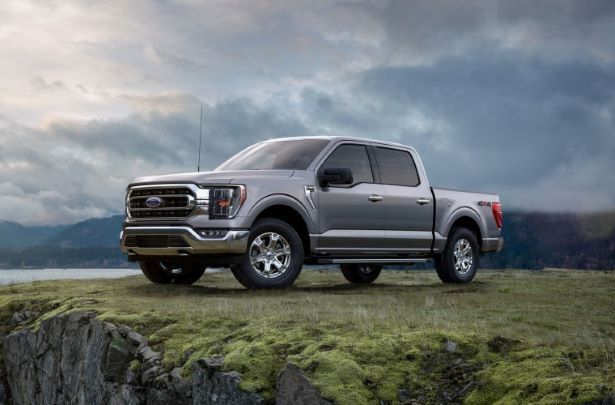 Not only does it get a new but recognizable look, it also gets variations in its look not seen before (11 grilles!), as well as seriously impressive utility features for the working man, much-improved technology that goes toe-to-toe with competitors, as well as some features birthed by some very fresh thinking. It even gets more power and a fully hybrid version. We take a closer look at this class-leader, as it should prove to be (once again).

Power to the Working Class 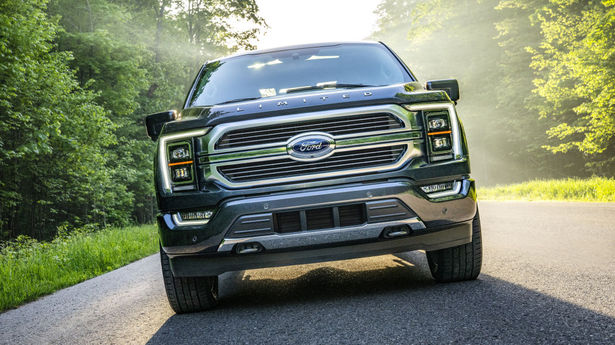 We've never felt the F-150 had a dearth of power, but it does need to go up against heavy hitters from Ram and Chevy. You can no longer just get away with V6, V8, and diesel versions in this segment anymore. It looks like Ford did its homework since there will be no less than six powertrain types.

Ford hasn't released any detailed power figures for its new truck yet, but we expect big things and a wide range of options, as well as power increases for most of the engines. We're guessing there will be an engine to suit just about anyone. 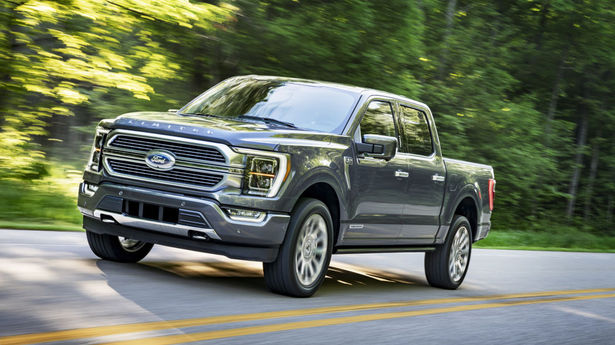 You might call the F-150 a significant refresh instead of a ground-up redesign. The new F-150's dimensions don't change much at all, and the overall F-150 shape remains recognizable, a good thing for the loyal Ford fans. While this might be the case, there have still been vital changes to the truck overall. From the grille and front fascia all the way to the tailgate, Ford designers and engineers have been hard at work to make this the best F-150 ever. 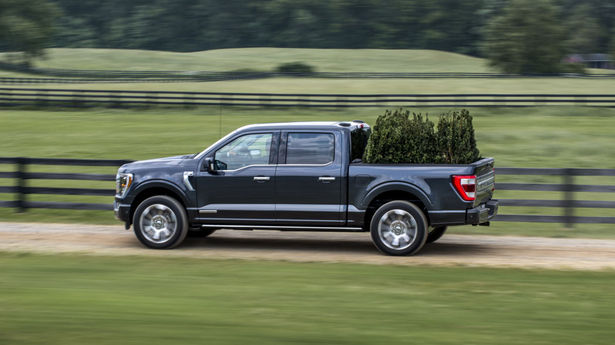 The front looks more refined than the previous generation thanks to a totally new grille and headlight design. The "C-Clamp" signature headlight pattern is thinner and encompasses the lower fascia, broken up a portion of the upper bumper and continuing to the base of the foglamps. The F-150 will actually have an astounding 11-types of grilles on its F-150 depending on trim level. The version you see here is the Limited trim, which shows off a brushed metal grille with a large single horizontal bar and an eggcrate style pattern within and a big blue oval Ford emblem front and center.

There's a new front fender vent that's similar to the large chrome one on the current and larger F-250 Heavy Duty. The front side window frame exhibits the same dropped cutout just aft of the side mirrors, a distinct F-150 styling cue. Fenders are less pronounced than the outgoing model, but the body contour a the base of the doors, as well as the body crease above the door handles, are now more dramatic. 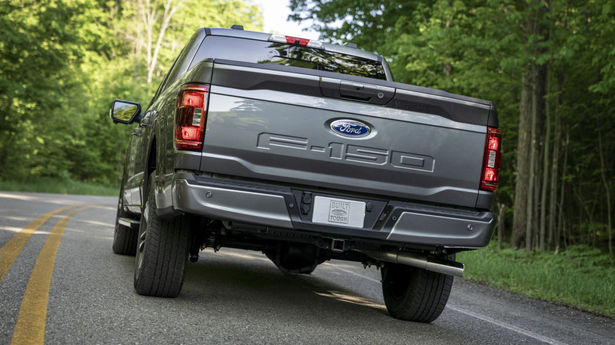 The tailgate will also receive numerous iterations just like the grille. As you go up the trim ladder, the tailgate design will get progressively more ornate (like before), with the Limited and Platinum trims receiving more of a brushed metal look across the width of the truck. Taillights will also get different looks, if not shapes, depending on the trim level. Overall, the F-150 looks more civilized and less rough-and-tumble than the last one. Again, it's recognizable but very fresh. We can't wait to see the full lineup. 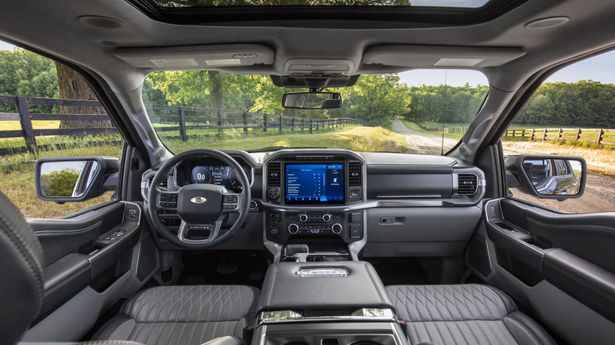 The F-150's interior is the best its ever been with all-new features.

The F-150's interior has to go up against the big guns of the Ram 1500, which presented a big challenge. It looks like Ford was very much up to the task. They reworked the entire cabin, and the result is a place where you can spend countless hours (if not days) with great technology and some truly convenient out-of-the-box features. 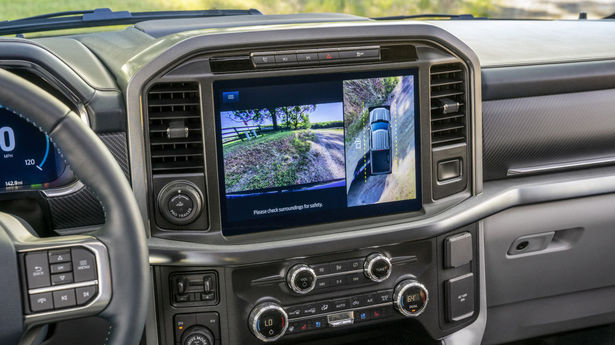 The new F-150 gets the latest generation of infotainment system known as SYNC 4, and Ford claims its not just a rehashing of the SYNC 3. The entire system's processing power has been increased, and the result is better responsiveness (the SYNC 3's was already one of the best), and it also gets new features like over-the-air updates, an electronic searchable owner's manual, and wireless smartphone integration. 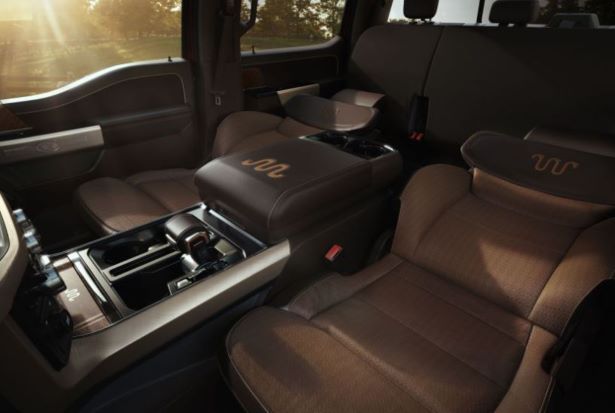 The F-150 also gets Android Auto, Apple CarPlay, and Amazon for Alexa integration for added voice-command convenience. There's also something we've been waiting for, a new standard 8-inch touchscreen and a larger 12-inch version on XLT and higher trims. The screen won't be a portrait-oriented on-dash version but a landscape-oriented in-dash version. The bigger infotainment screens on these models also can be paired with an available 12-inch digital cluster with vital driving data for easy viewing. 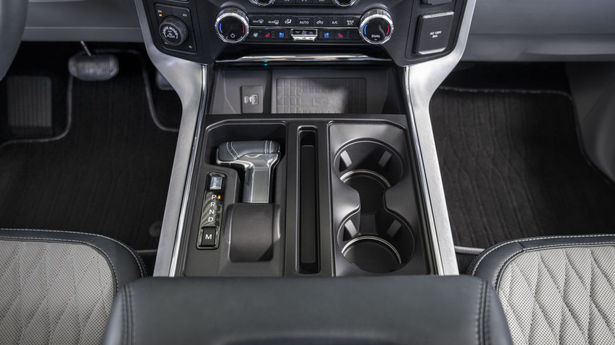 One of the most innovative features is what's known as "Max Recline" that will be available for the front seats of the higher trim F-150s, including Platinum, King Ranch, and Limited models. The seats fold almost totally flat, enabling occupants to do more than just take a catnap. In fact, Ford claims it will allow some owners to actually live in their trucks. These will be a boon for long-distance drivers, road-trippers, and vacation-lovers. Why someone didn't think of this sooner is beyond us. 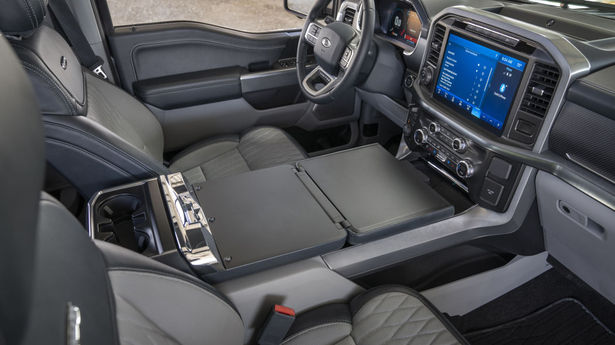 Another brilliant feature is the "Interior Work Surface". The gearshift lever actually folds into the center console (WHAT??) so the work surface can fold forward from the center armrest, creating a totally flat work surface for small laptops, notebooks, clipboards, etc. It's a brilliant feature that makes the interior much more utilitarian for folks who work in their trucks. It's more evidence Ford is really thinking about the working man or woman who spends most of his/her day driving. 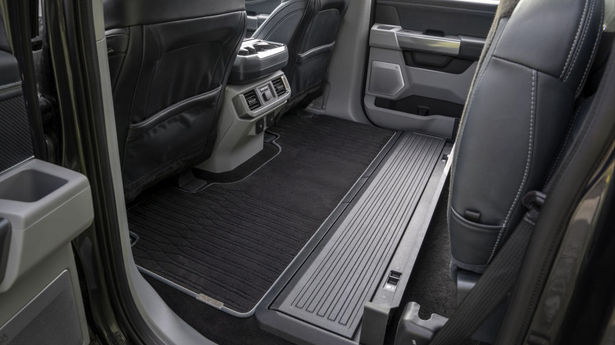 We're not quite sure what trim levels the next feature shows up in, but it appears it will at least exist in Super Crew configuration as optional equipment. The F-150 will get a full-width, under seat storage compartment that locks for security, as well as completely folds flat into the floor when not in use. The rear seat cushion can also be folded up to make room for larger items. It's a great use of space that owners will surely make use of time and again. 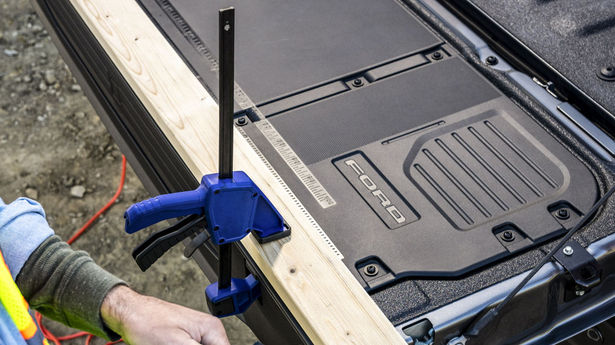 The new bed gets  "Work Surface" versatility, too. There's now a totally fold-flat optional work bed that provides a place to get the job done. It provides extra work space, as well as tailgate cleats for securing lumber and other long loads. You can even use it as a work bench since the tailgate incorporates indentations where clamps can be used for sawing, drilling, etc. And should the work day go longer than planned, the new exterior lighting system can be activated via SYNC 4 or the Ford app. 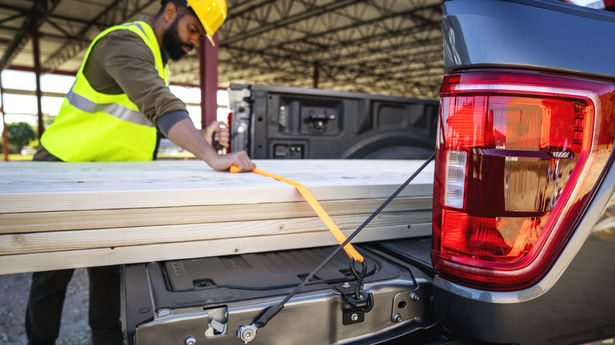 Ford really went whole hog on this final feature that should be a complete game-changer for pickup trucks. The new Pro Power Onboard is a generator that's built right into the F-150's bed. It will come in three permutations. There's a base 2,000-watt version that will be available on the gas models a 2,400-watt version that's actually standard on all PowerBoost models, and an optional 7,200-watt bad boy as top-end optional equipment.

The 2,000- and 2,400-watt versions get dual 20-amp, 120-volt power outlets. The 7,200-watt generator gets four 120-volt outlets, as well as a 30-amp, NEMA L14-30R 240-volt port serious power tools and equipment. So, are these just for quick jobs? It looks like Ford took into account that some jobs need the big guns. Ford says the 2,400-watt generator can run for 85 hours on a full tank of gas while operating at maximum load; the 7,200-watt will operate 32 hours on a full tank. All three generators while the truck is being driven, which means you can charge up your gear or run that deep freezer after a big hunt. 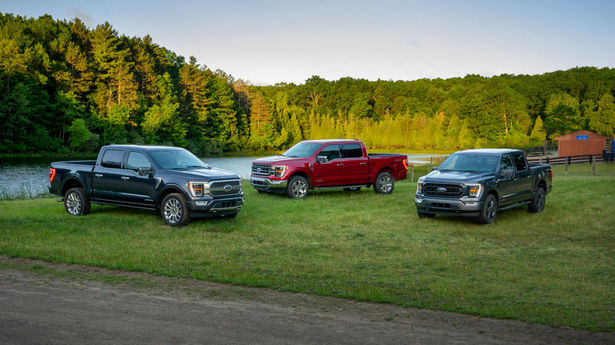 Pricing and sale dates have not been announced yet. We're guessing with all the new features, the new powertrains, and the interior amenities, the base MSRP for all trims will climb a little bit. The 2021 F-150 will likely go on sale this fall. Stand by for more important details, including EPA estimates, power output, and interior dimensions. We're excited to see what the next F-150 will be like behind the wheel, as well. Stay tuned.

The current Ford F-150 is still one of the best in the business. Read our full review below: 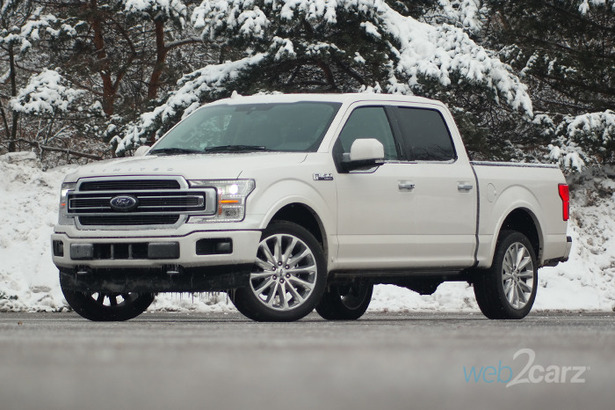