It may be the most important three-row SUV of 2021 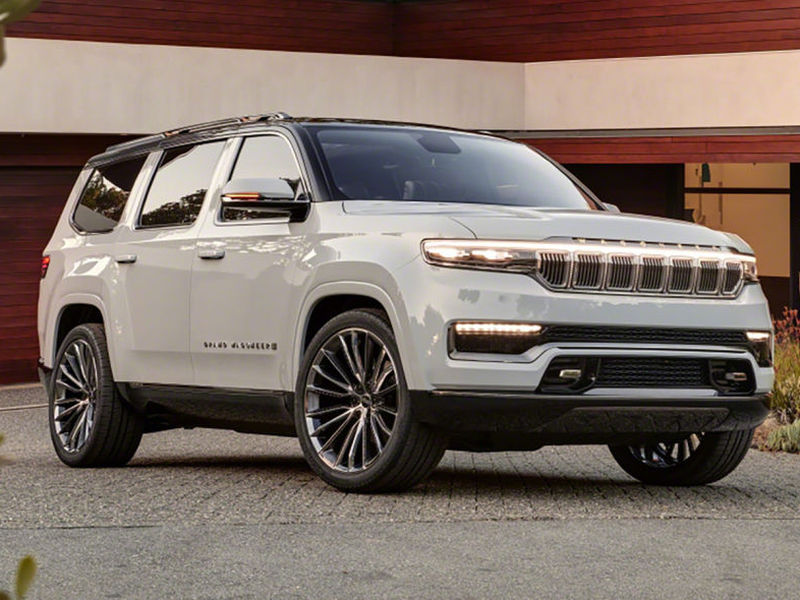 Taking the term "grand" quite literally.

There's been a ton of talk on the interwebs about the Jeep Grand Cherokee. There was talk about its derivation from the China-only Jeep Grand Commander. Bringing back the original legend from the '80s would mean doing it right, especially after the dismal failure of the Jeep Commander (2006-2010). Now, after all the speculation, the brand has unveiled a mostly production-ready Jeep Grand Wagoneer Concept, and it's unlike any Jeep we've ever seen. 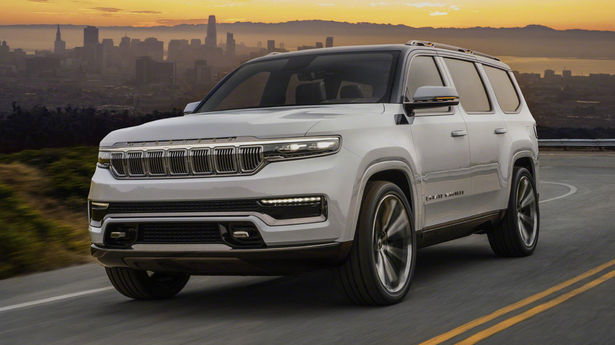 Jeep's biggest vehicle ever still showcases the Jeep look we all know.

More than rugged offerings like the Gladiator pickup or the Wrangler, the Grand Wagoneer looks remarkably high-end. Sure, it still has the iconic Jeep ethos with its boxy shape and multi-segmented grille. It also has big, bulging fenders to show off its Jeep DNA. The Wagoneer Concept is wide in front, tall in back, and it has some rather unique body-colored pillars that set it apart from other large three-row SUVs. It even has a contrasting roof for effect. 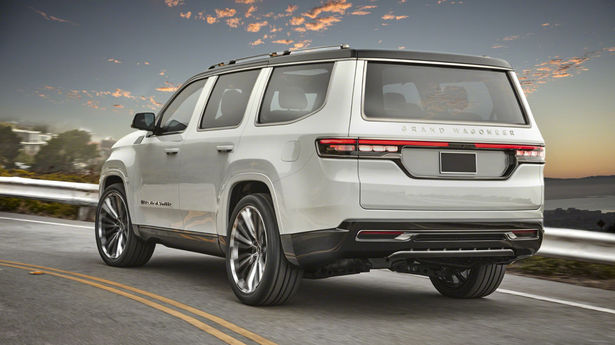 We wonder if those pillars will make it to production. It's different look, for sure.

The most noticeable aspect might be the complex grille coupled with the huge signature light bar in front and the full-width taillights. The Grand Wagoneer Concept also gets sequenced illumination of the front lighting that is truly dramatic, and we hope it makes it to the finished product. Other aspects won't, such as the massive 24-inch wheels with 3D printed carbon fiber weave-like portions of the complex spokes. Can you imagine curb rashing those suckers? It'd make you cry. 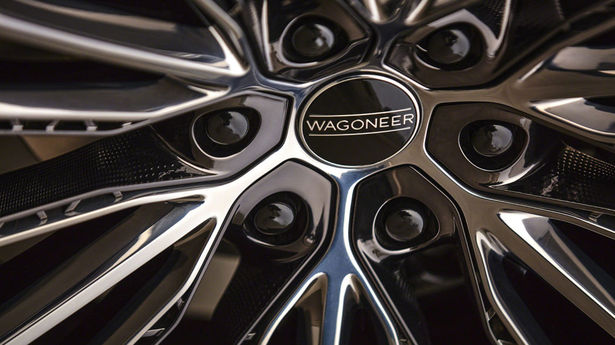 There are also fancy teak wood accents in the roof rails and surrounding the LED lenses in the headlights. Jeep also inserted some bronze-colored trim not unlike the Genesis G80 Sport's copper accent pieces. Jeep clearly paid attention to the exterior details of the Grand Wagoneer Concept, and more luxury vehicles are creating special trim bits for their vehicles these days. We'll see what survives and what gets left behind due to costs. 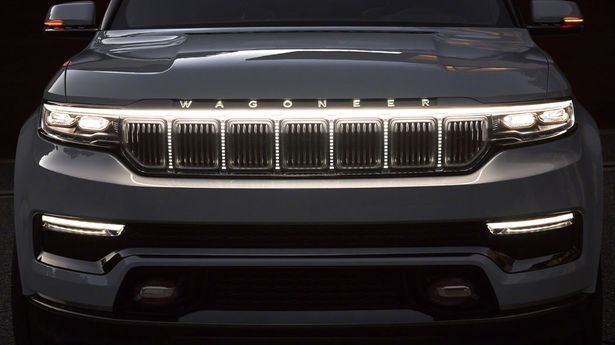 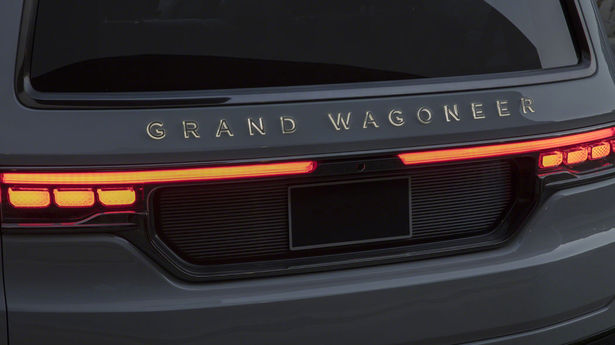 Even more regal than the Grand Wagoneer's exterior is the downright luxurious cabin. There's a lot going on here, and we doubt all of it will make it to the production version (but it would certainly justify the supposed  $100K+ price of the top trim Grand Wagoneer). The first thing you notice is the preponderance of screens. We count seven (digital gauge cluster, infotainment screen, climate control screen, two rear occupant headrest screens, and a control panel between the captain's chairs. 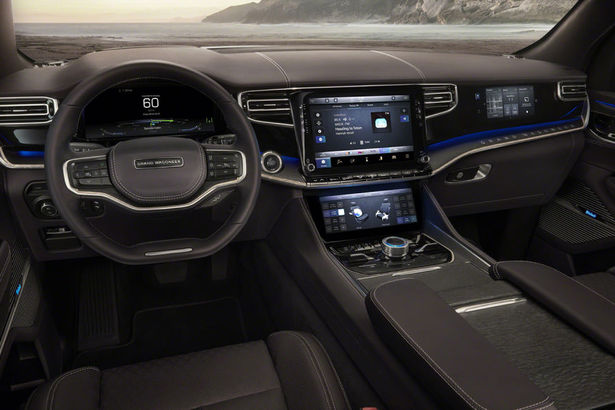 Jeep went all out with the Grand Wagoneer's truly regal interior.

In terms of screen size, they're all way big: a 12.3-inch instrument display screen, a 12.1-inch infotainment screen with the latest Uconnect 5 software, a 10.25-inch display for the climate and seat controls, and two 10.25-inch screens in back. We're not sure of the dimensions for the front passenger screen and the one between the second-row seats. 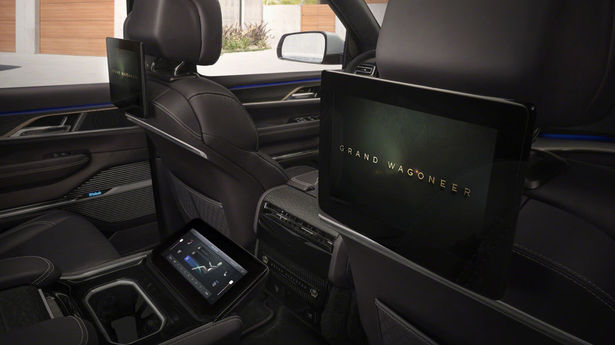 We're surprised the folks relegated to the back row get nothing. Let's hope you don't have to sit there. There's also a booming McIntosh 23-speaker sound system with aluminum trim and blue illumination just to keep it as fancy as other premium systems out there. 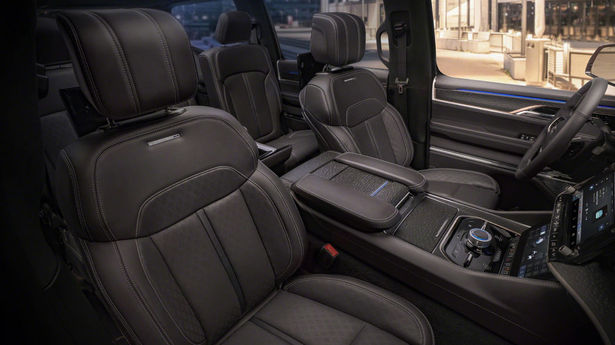 The seats in the concept are big, wide, and luxuriously padded. There's a huge center console, an expansive dash, an illuminated and knurled gear selector knob, and tons of aluminum and wood trim inside. Heat-treated lacewood shows up all over the dash and doors, but we're not sure that will make it to production. It is a beautifully-appointed interior, but our guess is that at least some of it's just for the concept vehicle, which isn't surprising since most brands go all out when it comes to showcasing their best. 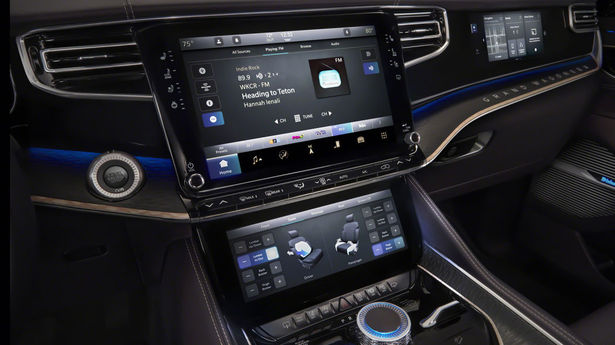 Owners might be driven to distraction by the sheer array of technology.

There's not much detail in terms of the powertrains available for the Grand Wagoneer. The concept does have a plug-in hybrid powertrain, but nothing has been specified in terms of horsepower, torque, battery, or range. There's no question there will be at least three offerings for engine choices including a hybrid. Speculation about the powerful hybrid system from the upcoming Wranlger 4xe has been tossed around, a naturally-aspirated V8, and there might even be a diesel from the Gladitor/Wrangler. Rumor has it that the production Grand Wagoneer will get three different four-wheel-drive drivetrains to choose from. The Grand Wagoneer's suspension will be fully independent in front and rear, and top trims will offer adjustable air suspension. 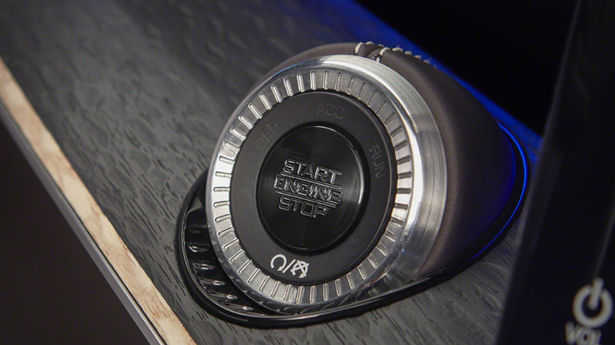 This lovely ignition button stands out on the dash trim.

Just like the original, Jeep will sell both lower-trim Wagoneers and top trim Grand Wagoneers. Prices will start around $60,000 with the highest trim level in the six-figures. That's a lot of money for a Jeep, frankly. Consider the fact that's BMW X7 and Land Rover Range Rover pricing. The new Grand Wagoneer will debut in 2021, possibly as a 2022 model.