The 2022 BMW iX Electric SUV is One Slick Pig 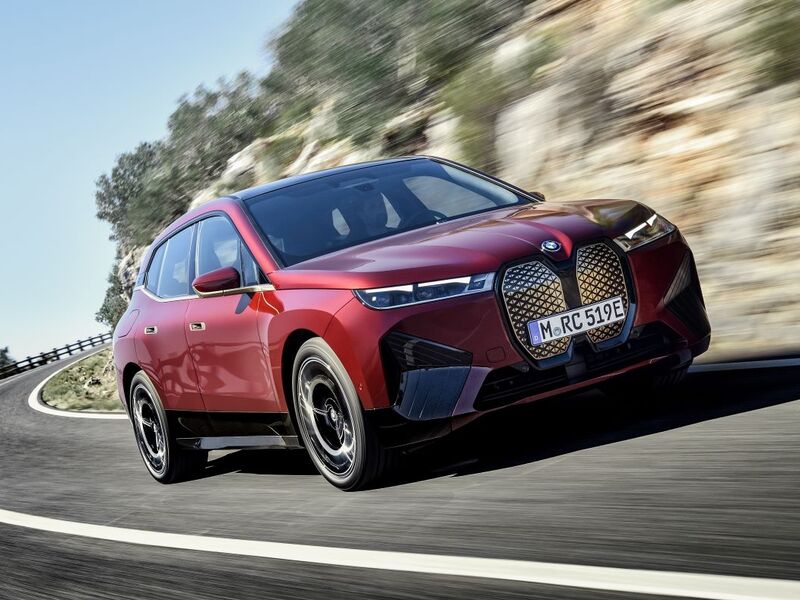 You can call the iX pretty fresh. Just don't call it pretty.

BMW's no longer messing around when it comes to electrification. The i8 was too expensive and too exotic to ever be mainstream. The i3 was better, but it's definitely too quirky and too small for American car buyers (as well as too pricey for what it is). Now, the 'i' sub-brand aims for the bullseye by delivering BMW's first all-electric SUV, and it's called the iX. 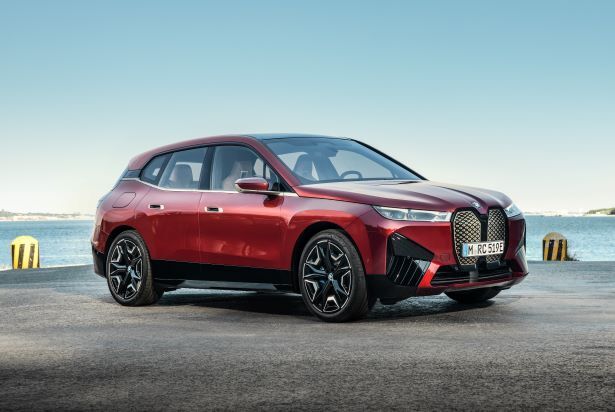 The iX is right-sized for those who want efficiency and space.

Of course, there's the i4 electric sedan that's more mainstream than the i8 and i3, but a premium electric SUV is what America wants. The iX just debuted at BMW's #NEXTGen online event, and it's definitely making waves in automotive news circles. The important thing to remember, aside from its efficiency, is that it's practically-sized, about the same dimensions as the excellent BMW X5. 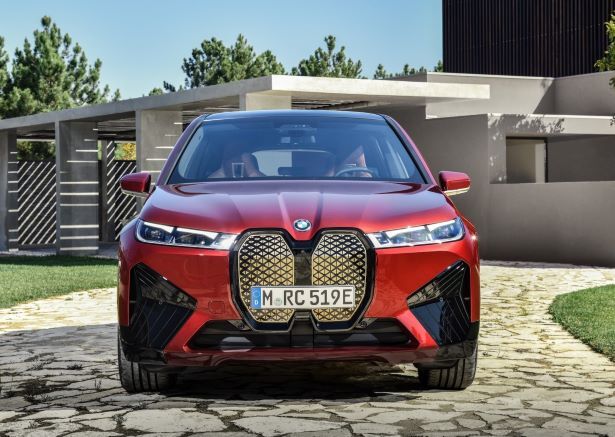 Why an EV's faux grille needs to be this big is beyond us.

One look at the iX, and the first thing you notice is that huge double kidney grille that's way too big to be ignored. The styling comes from the current BMW 3- and 4-Series cars, and it's a lot to look at. We're not big fans of the oversized grille design,  and we're not the only ones. By contrast, the thin headlights look almost too small. Both the headlights and taillights use BMW LED Matrix technology and are the thinnest versions on any production vehicle.

The rest of the vehicle looks pretty good with a dramatically creased hood, SUV-like fender wells, a sloping roofline, and attractive taillights. The rear has interesting exhaust port blanks where normal pipes would be found. It's a bit misleading. We think the bottom half of the rear fascia looks a lot like the front of a Lamborghini Aventador, oddly enough. The C-pillar has a similar notched look as the i3 hatchback, and it's clearly a nod to the 'i' brand. There are also integrated door handles, 20" aero wheels, and a low roof height that's about the same as a sporty X6. 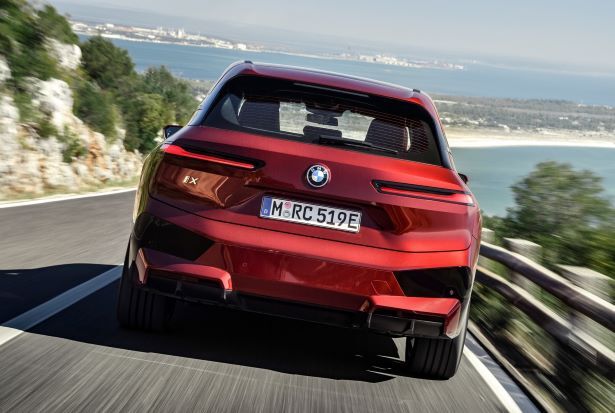 The iX makes use of BMW's latest Carbon Cage structure that combines carbon fiber reinforced plastic (CFRP) with an aluminum spaceframe for lightness and structural rigidity. There's not a ton of details about the powertrain, but we do know that it makes use of BMW's 5th-generation Drive technology that delivers 496-horsepower from two electric motors and a high output battery situated in the floor.

Performance is swift with a 0-62 mph sprint of less than 5 seconds. The range is estimated at over 300 miles. The Tesla X gets about 371 miles of range, the Audi e-tron about 222, and the Jaguar i-PACE about 254. That's pretty competitive. The iX also utilizes new charging technology at up to 200 kW. The result is the iX's ability to go from 0 to 80% charge in less than 40 minutes. Fast-charging provides 75 miles of range after a mere 10 mins of charging. Using a standard wall plug takes just under 11 hours for a fully charged battery. 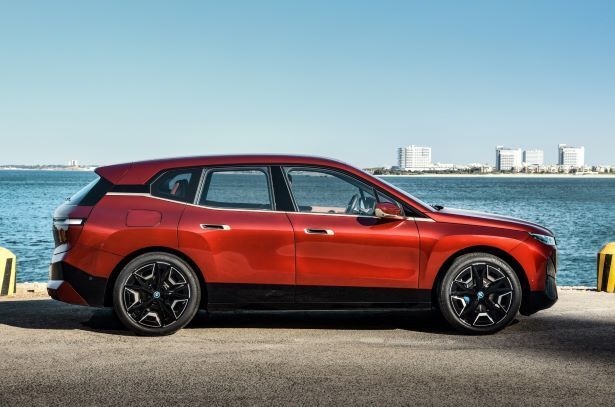 It's clear that BMW wants to borrow the best of its SUV design while delivering great efficiency that would actually be class-leading if you consider the Tesla X to be a bit of a niche vehicle. This combination of style and practicality should help the iX take on current competitors with ease, as well as fend off any new premium EV SUVs that are coming soon, such as the Mercedes EQC.

An Original and Tech-Heavy Cabin 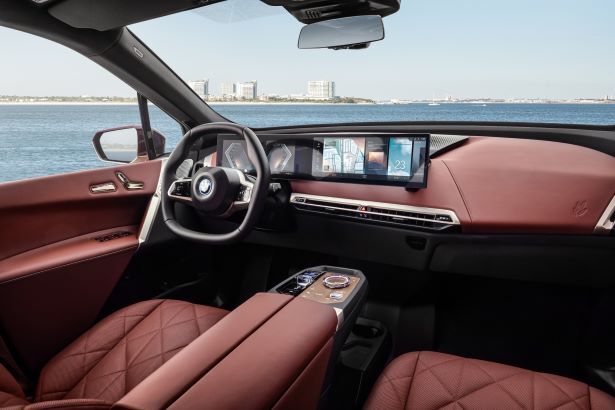 Giant screens, a racing-style steering wheel, and big-patterned seat stitching. What's not to like?

Although we weren't blown away by the iX's exterior styling, we were pleasantly surprised by the cabin. It actually reminds us of the originality with which Genesis approached their GV80 and G80. Not only are the colors here original, but the styling is also airy, regal, and modern, all at once. BMW calls it a "loft on wheels" feeling. We're not quite sure about that, but it is open, warm, and appealing.

The expansive and minimalist dash departs from current BMWs, despite the fact that there is an enormous single, curved screen for instrumentation and infotainment. The thin HVAC vents in the center and the floating center console look great. The electric platform allows for more openness and design originality, and the results are excellent. 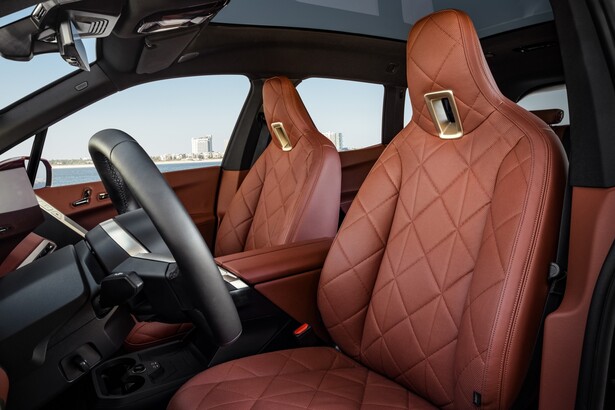 One thing you'll notice right away is the all-over quilting on the seats. It's very original in the way it's done here, creeping onto every front seating surface including the bolsters and the headrest. In terms of space, the iX can seat five in comfort, and there's a ton of space given the fact that there is no transmission tunnel causing obstructions. This will be especially good for the rear-seat middle passenger. 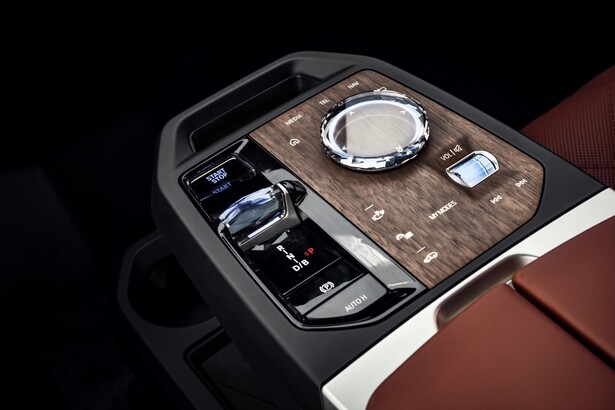 The iX also pushes the boundaries in terms of technology, and it will stand at the top of the Bimmer heap in that regard. BMW says its computer systems will process information at 20 times the pace of current BMWs, and it will be the first 5G-capable BMW product. The iX will also possess some autonomous driving abilities, including automated driving and parking functions. To what extent, we don't know, but fully autonomous is incredibly unlikely. 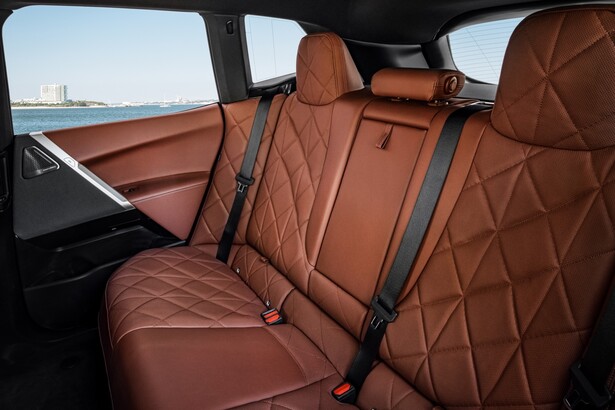 In terms of other features, the iX will have 2.5-zone automatic climate control, a vivid head-up display setup, an electrochromic panoramic glass roof, premium audio systems that include a standard 12-speaker system, an available 18-speaker Harman Kardon Surround Sound System, a truly epic 1,615-watt, 30-speaker Bowers & Wilkins system. The list of safety tech hasn't been provided yet, but expect it to be robust.

Expect pricing to start around $70,000, which is almost up there with the Tesla Model X. But what the iX offers is the reputation of a respected brand and an interior that eclipses the Model X, along with a range that's not far off the mark. What you see here is the production version of the iX, so when you see them silently rolling around your 'hood, they should be identical to these photos. The iX will start selling in early 2022, so try to hold out.