Who says the V8 engine is dying?

Conquer the tarmac, as well as the terrain.

It feels like a horsepower war among 4x4s these days. The Ram Rebel TRX recently bowed with a monster 702-horsepower supercharged HEMI V8. Even the new Bronco gets a 310 horsepower EcoBoost V6 for its top engine, whereas the current Jeep Wrangler tops out at 285 horsepower. That all changes now that Jeep has shoehorned in a 6.4-liter Hemi into its top trim Wrangler Rubicon.

That hood scoop looks pretty mean on the Wrangler, don't you think?

So, how potent is this mill? The 6.4-liter naturally-aspirated V8 will churn out a significant 470 horsepower and 470 lb-of torque in the Wrangler Unlimited (4-door) Rubicon 392. While that number is impressive, just look at the claimed 0-60 mph time of 4.5 seconds. That's damned fast, considering the fact that it'll beat a Ford Bullitt Mustang by a tenth of a second. The V8 Wrangler will also nail the quarter-mile in 13 seconds flat. That's a four-door Jeep Wrangler. Wha?? Yep.

The Rubicon 392's big engine gets mated to an eight-speed automatic transmission (there's no manual transmission offered), and Selec-Trac full-time four-wheel-drive system. And to make matters even better, the Rubicon 392 also gets a raucous dual-mode exhaust system that will sing the engine's praises quite loudly. We can't wait to hear it.

It's not a pretty V8, but at least it's not covered by a stupid plastic shroud.

If you think the Rubicon 392 was created for drag racing, you'd be wrong. It might be the fastest production Wrangler in history, but it's built for serious off-roading with 10.3 inches of ground clearance and improved suspension articulation and a 2-inch lift over the standard V6 Rubicon to provide 44.5 degrees of approach angle, 22.6 degrees of breakover angle, and 37.5 degrees of departure angle.

The Rubicon 392 also has the ability to ford up to 32.5 inches of water thanks to its revised air induction system that can move up to 15 gallons of water per minute away from the engine. This is a big improvement over the standard Rubicon's recommended 19 inches. There's also a secondary intake that bypasses the functional hood scoop in case it gets clogged with mud (for those who are dead serious about off-roading). The mere fact that Jeep thinks about these things is impressive ("Honey, I clogged the scoop!").

The 392 also receives a new 2.72 low-range gear ratio that enables a 48:1 crawl ratio, driver-selectable Off-road Plus mode with additional settings for Sand and Rock,  Fox aluminum monotube shocks, and upgraded brakes to stop what's likely to be heavier Rubicon with the bigger engine and upgraded componentry.

There will also be the option to outfit the 392 with new half-doors that showed up on the concept vehicle, not coincidentally just before the Bronco (with half-doors) showed up. The half-doors have a cut-out in the base, eliminating the roll-up window. There will also be body-colored covers that pop in and out of the cutout.

The 392 will stand out (aside from the suspension lift and the hood scoop) with bronze badging and 17-inch beadlock wheels, as well as bronze interior stitching on the steering wheel and seats. It also gets paddle shifters, which are a first for the Wrangler (and a bit odd, frankly).  Paint colors include Black, Bright White, Firecracker Red, Granite Crystal Metallic, Punk ’n Metallic, Sarge Green Metallic, Snazzberry Metallic, Sting-Gray Metallic, and Billet Silver Metallic. Each exterior paint color can only be mated to black seats with bronze stitching. No pricing has been announced, but the 392 should arrive in early 2021.

The current Jeep Wrangler is the best one yet. Read our full review: 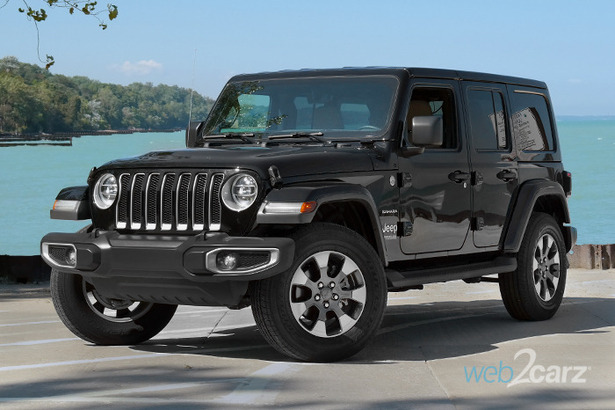