This concept is pretty much production 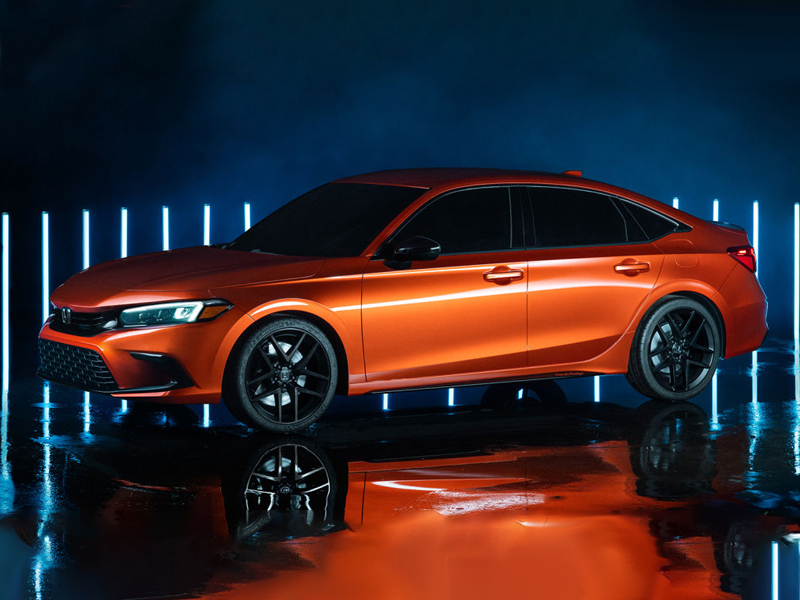 This is what happens when you throw an Accord in a dryer.

Honda did a couple of interesting things with their new 2022 Civic Concept. First and most importantly, they made it way more mature (no, not for baby Boomers) by giving it a more Accord-like look, and then they debuted it on Twitch, whose viewers are mostly 18-24-year-olds. That's quite a juxtaposition, don't you think? Most Civic buyers are younger, so that part makes sense. But the Civic is all grown up now, making a paradigm shift from the current car. Just look at it. It's hard to believe it's the new Civic. 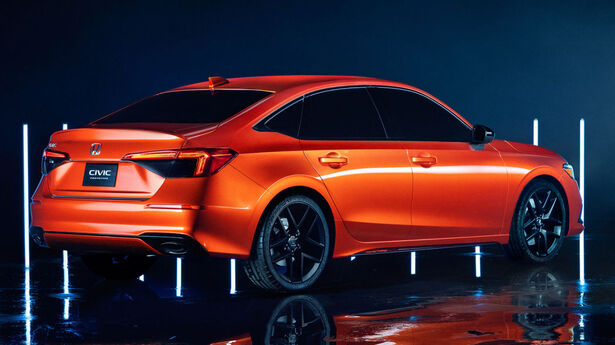 Lest you think this is a far-out concept that the production model won't even resemble, think again. The Civic Concept looks almost fully fleshed out since there are no radical materials or crazy styling elements. It does pull some of the best styling elements from the Accord, and the result is a more attractive and cohesive design than even the bigger brother can pull off. The more mature styling seems like the right move for the model, but time will tell if it can still capture younger buyers. 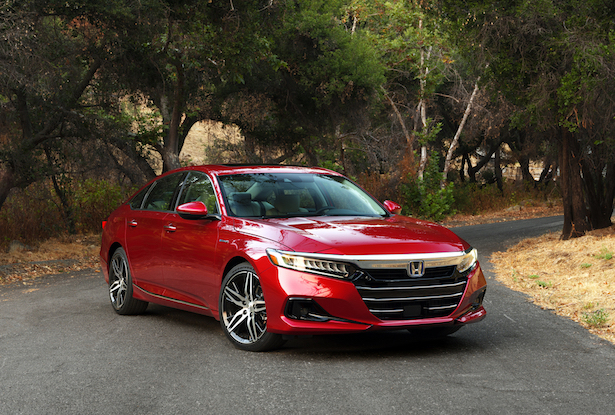 The new Civic borrows a ton from the Accord, but we think the Civic looks better.

We can only go off the newly released photos from the Twitch debut, but it does look like the front fascia of the new Civic is sportier than the Accord's. The lower black grille (possibly just on the Si and the Type R trims) is pushed forward, and the upper grille appears to have more separation from the lower half than the Accord does. 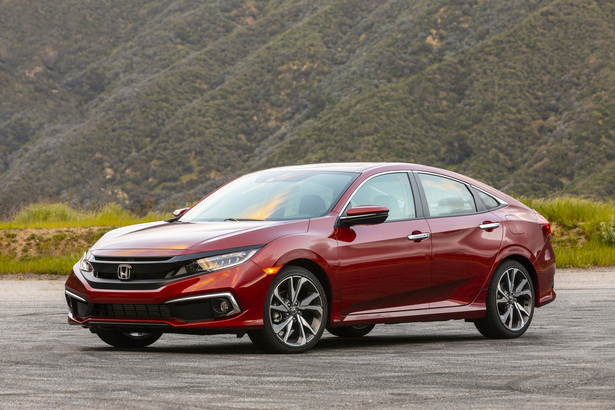 The numerous creases, folds, and contours of the current Civic have been ironed out for the 11th-generation Civic.

The triple beam headlights are similar to the new 2021 Acura TLX, except that chevron-shaped LED signature is flipped to the top versus the TLX's on the bottom portion of the headlight cluster. The entire front end looks different from the outgoing model especially because it's more upright and less busy. The current sedan version (below) just has way too many creases, lines, and multivariate surfaces. The back end of the new Civic has some similarities to the TLX, as well as to the current VW Jetta. 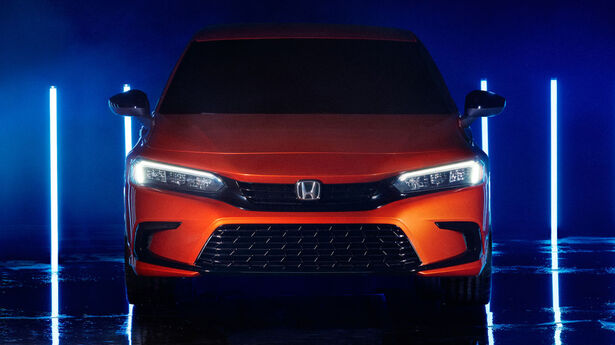 There's a lot to love about the new design, and we love the fact that it's moving away from what was an overdone design with too many surfaces to one that's pleasing to the eye. This prototype gives us a look at styling elements that will show up across the Civic model line, including the Civic Sedan, Civic Hatchback, Civic Si, and the crazy quick Civic Type R, which will likely come a year after the new Civic hits showrooms. 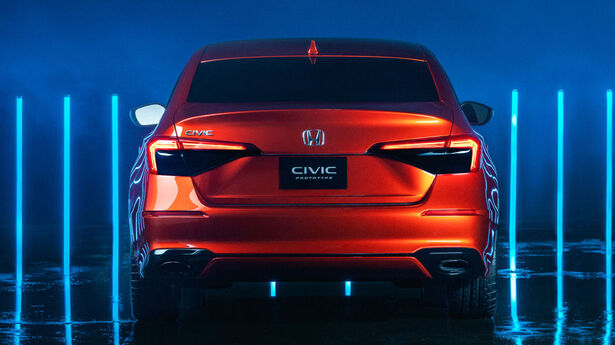 Honda made the greenhouse and interior more expansive by moving the A-pillars a bit further back in relation to the driver, placing them more in the peripheral view. In executing its concept, the team also made substantial changes to the Civic's upper body design to maximize visibility for the driver and passengers, including moving the front roof pillars rearward relative to the driver, to place them more in the visual periphery, and relocating the side mirrors to the doors for a clearer view through the front side windows. 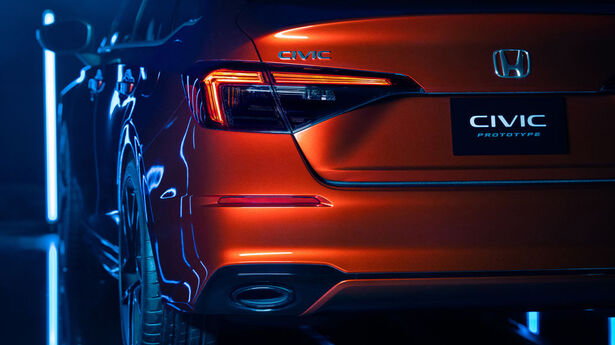 This view shows fresh, new taillights and a much simpler tail section.

It's hard to fathom how different the new Civic looks from the current vehicle. It's like Honda took a look at the youthful look and concluded that it's just too polarizing. Even the 2021 Civic has been smoothed out a bit in the front to look less busy. Clearly, those changes weren't enough for Honda with the new car. It borrows elements from its own Accord, as well as those from Acura, and even from the Germans. The end product is one the brand (and customers) should be pleased with. 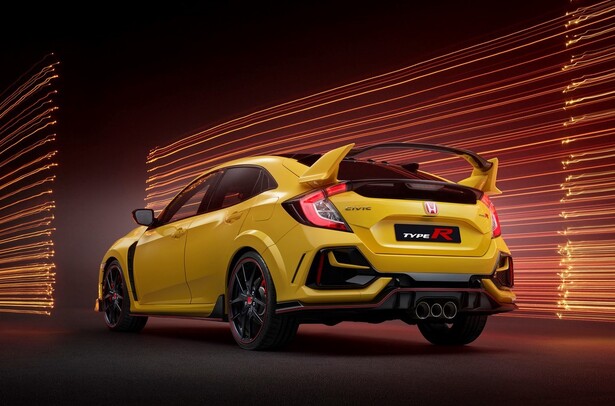 Man, that might just be the busiest back end on a production vehicle.

Although there are no shots of the interior (just a rendering), what we can see below is that the new cabin is cleaner, airier, and much less busy than the current car's. Even the steering wheel is simpler, and the dash looks more like those found in current Mazda's. According to Honda, the new Civic emulates some of the earlier generations that favored ergonomics and visibility over unnecessary and overdone styling elements.

The HVAC vents no longer sit at the top of the dash but form a more linear setup that blends a honeycomb mesh to help the vents blend in. New features also show up inside, including a fully-digital instrument cluster, as well as a new 9-inch full-HD Display Audio touchscreen that's seated on top of the dash. 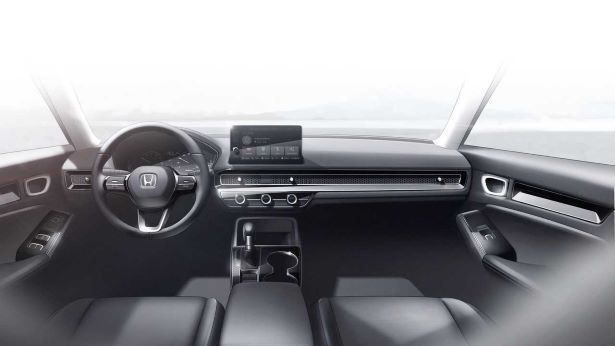 The unveiling of the new Civic can be seen below in the dramatic but short video clip. It might just be one of the best model redesigns we've seen in a long time because it takes a polarizing car and turns it into something universally attractive.

We love what we see so far, and more details are forthcoming, including an official debut of the production model. We're guessing some of the other models and trims will show up alongside the sedan, and it looks like Honda is going in the right direction with this evolved version of its best-selling sedan. If the production model looks as good as this, we'd be happy to choose it over the current Accord any day of the week. The question is, will we like it as much as the new Hyundai Elantra, that's actually more daring than its predecessor?

The current Civic is a great, sporty small car. Read our full review: 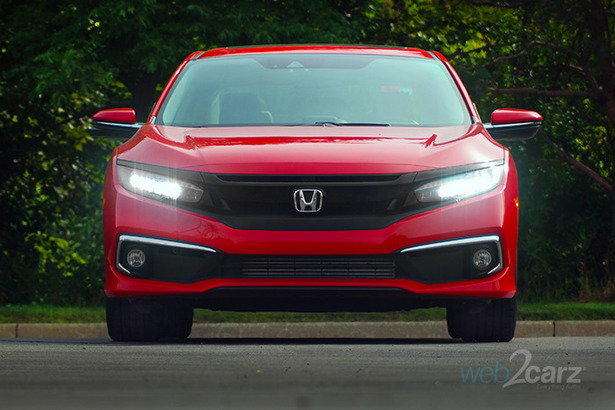