The Ford Maverick is a $20,000 Compact Pickup Truck With Hybrid Power

It's the top gun of compact pickup trucks 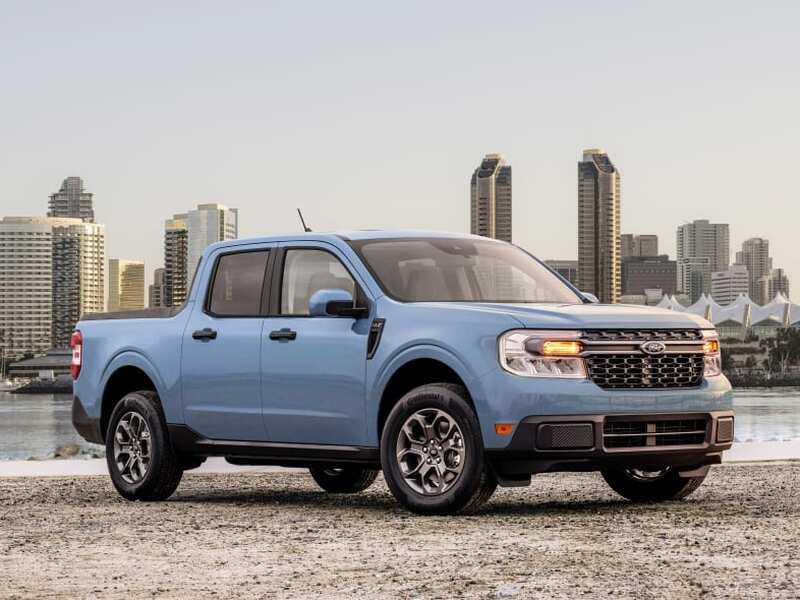 It's the truck everyone else will wish they thought of.

Ford has been knocking things out of the park in the pickup truck innovation arena lately. First, the huge news about the Ford F-150 Lightning all-electric truck and now the news of the 2022 Ford Maverick hybrid compact pickup truck hits the interwebs. Who would've thought the manufacturer of the most popular combustion-engine pickup truck series would be the one to innovate it? What's more, the Maverick's starting price is under $20,000. 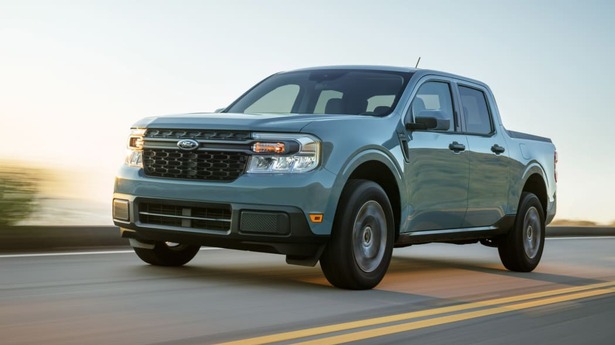 The Maverick looks like no other pickup truck on the road today.

The Maverick slots in just below the Ranger. The interesting part is that the Ranger was upsized from its old compact dimensions to more of a mid-sizer, so Ford had room to bring in the Maverick. It's the first compact pickup truck for Ford since the Ranger was last sold here in 2012. Ford hopes to draw more customers who can't or don't want to pony up $25,000+ for a Ranger and those who want utility without size, as well as increased efficiency. But the Maverick is anything from bargain basement, as we'll see a little later in this article. The $19,995 base price should prove to make the Maverick a big seller. Even the rather dated 2021 Nissan Frontier costs a rather shocking $27,190. 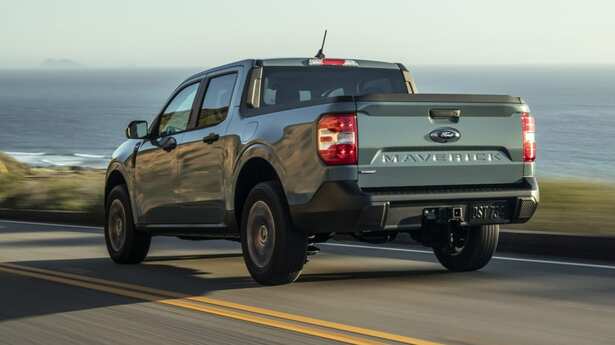 Where the Maverick breaks from tradition is its unibody construction, which is less rugged than the Ranger or F-150's body-on-frame build. While it looks like a bona fide pickup truck, the Maverick should ride more like a car and competes with the likes of the Honda Ridgeline and the upcoming Hyundai Santa Cruz. The Maverick measures a food shorter than the Ranger and almost three feet shorter than the F-150. The base trim XL comes in front-wheel drive hybrid four-cylinder with 191 horsepower. A 250-hp turbo four gas-only is the next engine up (with available AWD). The good news is that even though the hybrid is FWD only (for now), it gets 40 mpg city, 33 highway, and 37 combined. 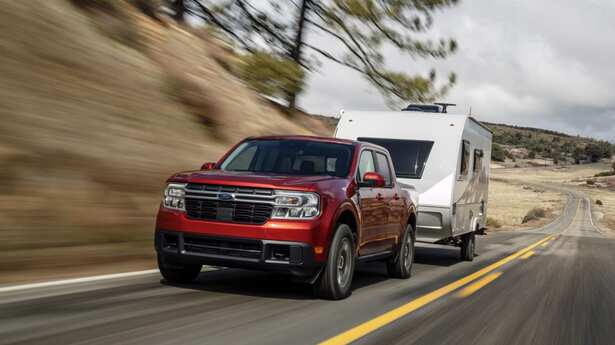 Don't be afraid to tow a small camper or boat with the 4,000-lb tow rating of the gas-only Maverick.

For customers who need to tow, the base hybrid FWD can manage 2,000 pounds and the turbo four can do 4,000 pounds with an optional towing package. The payload for both models is a respectable 1,500 pounds. In terms of utility, the Maverick has pre-wired 12-volt pickups in the bed for to power accessories, and you can also get an optional 400-watt 110V hookup for power tools, etc. We especially love the locking tailgate that can hold a position at 45-degrees and support 400 pounds. This effectively extends the bed to 6 feet. You can run a ratchet strap through the tie-down loops to hold 4x8 sheets of plywood or sheetrock that can rest on the rear wheel wells (see below).

Creature comforts inside are better than basic, and the Maverick also gets some of its own unique touches not found in its bigger brethren. The standard infotainment system is an 8-inch widescreen across the model line, but it looks attractive and sits atop the dash giving it a less bulky look. There are nifty storage bins, door pockets with a unique water bottle holder, and a great under-seat storage binnacle in the back. Ford has made the Maverick's surfaces easy to clean, which should be a boon for those who really want to use the truck as it was meant. 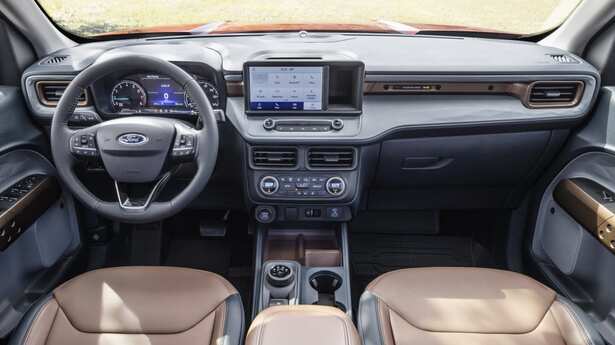 Cloth seating surfaces, as well as what could be either real leather or synthetic that looks like the genuine article, especially in the two-tone colorway you see in the photos here. The excellent rotary shift knob from the Ford Bronco Sport is also present in the Maverick, which is probably the best one we've used in any current model sold today. 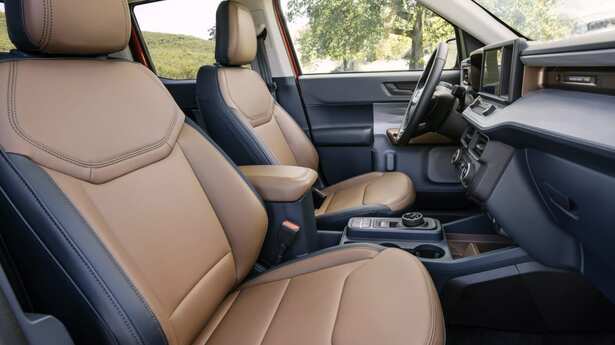 There's no question that the Maverick will be very attractive to buyers based on its price and efficiency, but the fact that (at least at the outset), you won't be able to get the hybrid model in all-wheel drive could present an issue. It might mean folks will be drawn to the slightly pricier turbo-four gasoline-only model instead of the more efficient hybrid. Our guess is that Ford will bring an AWD model into the lineup not long after the first year of the Maverick passes. It only makes sense for them to do this instead of ruling it out altogether. 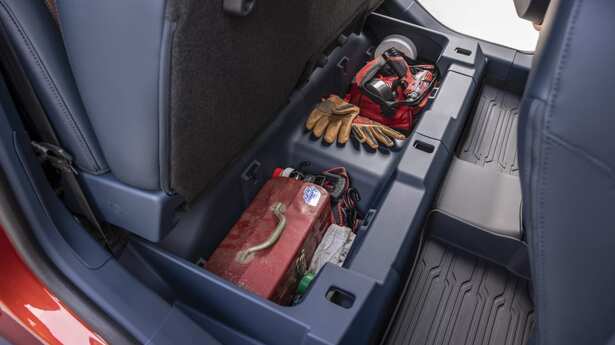 What is impressive is the fact that the Maverick will actually be the least expensive hybrid vehicle on sale in the market, as well as being Ford's cheapest model now that the Focus and Fiesta are no more. It also proves that Ford is heavily invested in the truck market and will have a truck in every category: Maverick (compact); Maverick (hybrid); Ranger (mid-size); F-150 (light-duty); F-150  Lightning (electric); and the F-Series Heavy Duty models. 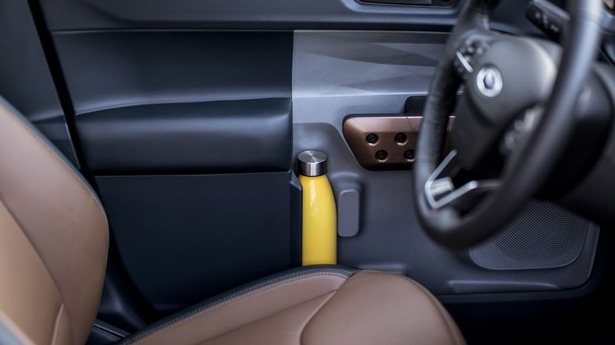 What Ford is doing with the $40,000 F-150 Lightning and the $20,000 Maverick Hybrid is providing efficient power for an affordable price. Their aim is clearly to make green utility machines more accessible to the public while providing tremendous value at the same time. Trucks are hot sellers, unlike the hybrid and electric hatchbacks and sedans you see on the market. It's a brilliant move that will save Ford, as well as revolutionize the industry.