10 details that amount to the whole 9 yards

Will it be the new king of the hill?

If you haven't changed your wardrobe in the past 15 years, you now know what the Toyota Tundra felt like until yesterday when the 2022 Toyota Tundra showed off its new clothes. It may have taken a Methuselah-like decade-and-a-half for the new third-generation light-duty truck to show up, but it appears to have been worth the wait. Pickup trucks occupy the hottest segment in the automotive industry, and they also happen to have the highest profit margin for manufacturers. 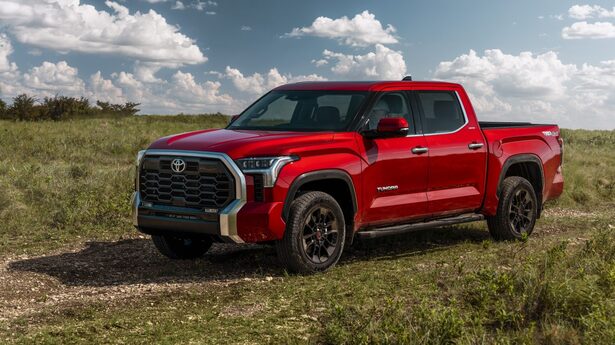 The outgoing Tundra pales in sales compared to heavy-hitters like the Ford F-150, Chevy Silverado/GMC Sierra, and the Ram 1500. Hell, even baby brother Tacoma eclipses the current Tundra. What's important to note is the fact that the Tundra is totally new and doesn't carry over a single part from the old truck. Even more impressive is the level of improvements that make the new Tundra truly competitive. Here are the ten best things about the new Tundra that should hopefully help pull customers away from the bigshots. 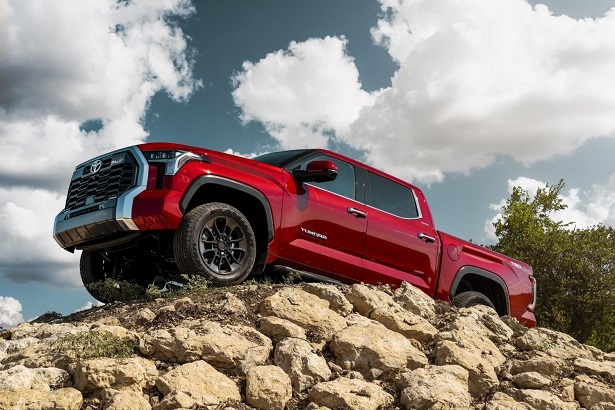 The old Tundra wasn't bad-looking, but it seemed pretty boring compared to every other light-duty truck model (largely because they were all redesigned, whereas the Tundra was not). Toyota tried to give the old truck new appearance packages that barely helped lengthen the life of the second-gen Tundra. The great news on the styling front is that the new Tundra looks the part and can go toe-to-toe with the competition because of its bold appearance that's more truck-like than ever before.

The creases all over the body give the new Tundra an impressively rugged appearance, and the front fascia is about as bold as it gets. The grille looks bigger than the GMC Sierra's, and the claw-like daytime running lights are about as unique a shape as we've seen so far. The grille frame makes the one on the Hyundai Palisade SUV look rather tame. The result of all this folding, creasing, and dramatizing provide the new Tundra with just the kind of styling that will help those all-important sales figures. Tundra owners won't have to be embarrassed by an also-ran.

2. It Has Class-Leading Hybrid Power 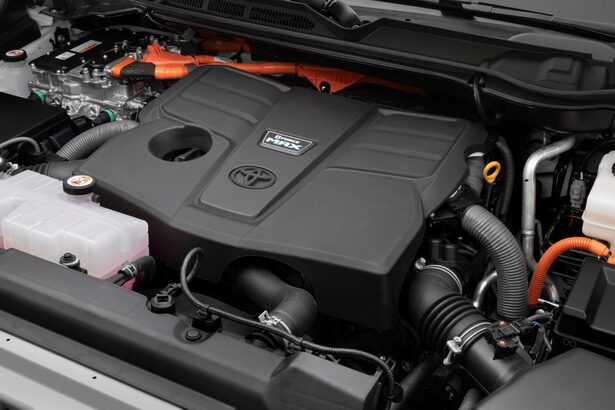 The outgoing Tundra used to seem powerful with its 5.7-liter V8 good for 381 horsepower and 401 pound-feet of torque. But in its waning years, the competition eclipsed it (Silverado V8 @ 420 hp, Ford F-150 V6 Hybrid PowerBoost @ 430 hp). What does Toyota do? It dropped the V8 and shoved in a new, optional I-Force Max powertrain that pairs an electric motor with a new 3.4-liter twin-turbo V6 that brings the output to a whopping 437 horsepower and 583 lb-ft of torque, surpassing the Ford by a smidge. The base, non-hybrid twin-turbo V6 engine in the new Tundra provides a tad more horsepower and quite a bit more torque, to the tune of 389 horsepower and 479 pound-feet of torque.

The electric motor is parked behind the engine, powered by a 288-volt nickel-metal hydride battery pack under the rear seat. At low speeds, the hybrid system can run on electricity only, but the gasoline engine will automatically jump in at 18 mph. Sport or Sport+ drive modes will maximize performance from the hybrid drivetrain.

3. It Tows Even More Than Before 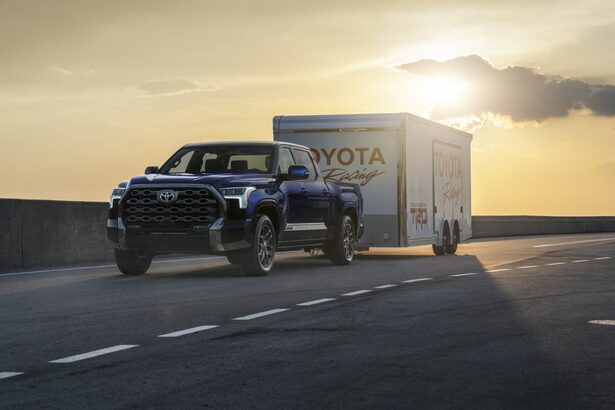 What's more, Toyota stated that all Tundra models equipped with a hitch can tow more than 11,300 pounds, which is impressive across the model line. Boat, trailer, ATVs, etc. can rest assured they won't drag you down the mountain when the going gets tough.

4. It Gets Upgraded Rear Suspensions Bits

The old Tundra was fine, but you couldn't exactly call its ride refined or ideal for handling the big truck's weight. It's a good thing Toyota decided to upgrade its rear suspension from a dated leaf-spring design to a coil-spring, multi-link solid-axle suspension setup. Toyota says ride comfort, straight-line stability, and handling should be markedly better than the old truck's. The maximum payload is 1,940 pounds, jumping 11% from the outgoing model. 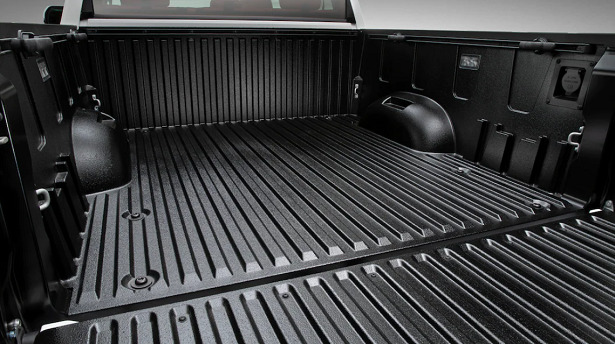 Metal beds are for suckers, and they do not hold up well over time. Most truck owners opt for a spray-in bedliner, which can be expensive, anywhere from $400 to $700. They're absolutely necessary for the longevity and appearance of your pickup truck. Toyota gave the new Tundra a composite bed made from a sheet-molded compound that resists dents and corrosion. Underneath, there are aluminum cross members for strength. Toss that rebar in, and don't worry about making your truck look like a mess.

6. It Gets a Fully Boxed Ladder Frame 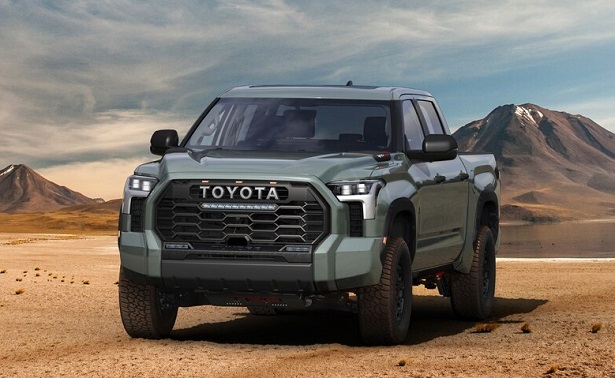 The Tundra gets a serious frame upgrade that's wider for improved stability and towing capability. Ride comfort and handling characteristics also get a boost. In the higher trim levels, the cabin is mounted to the new frame with hydraulic mounts for better ride quality and occupant comfort.

The fully boxed laddre frame is made with high-strength steel, and aluminum is used in key areas to help reduce weight. What's more, frame cross members more than double in size to provide additional reinforcement and structural rigidity. Toyota even added an important detail:  a new front cross member for the steering gearbox, which adds rigidity while enhancing steering input and handling dynamics.

7. It Gets the Newest Toyota Infotainment System 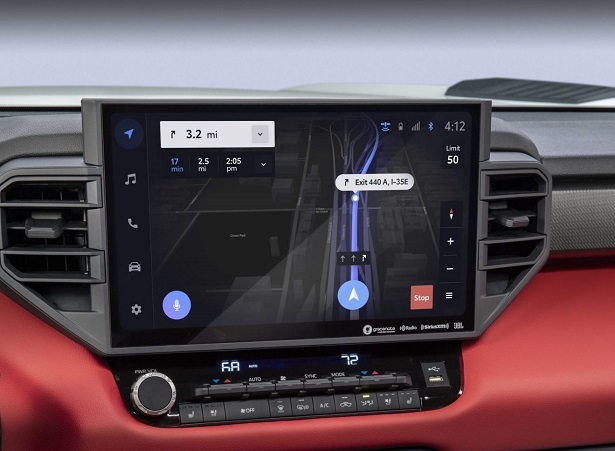 The old Toyota Entune system really did need to go. Heck, we aren't really even fans of the most recent system that's found in the Highlander, Sienna, and the RAV4, even though it is a couple of steps up from the current Tundra's Jurassic-era system that looks like it was programmed by a five-year-old.

Toyota developed a brand new in-house system that promises to be the brand's best infotainment setup yet. A new, optional 14-inch touchscreen is the biggest in its class, and it should prove to be vivid and much easier to use and look at. The Tundra will also offer standard wireless Apple CarPlay and Android Auto along with a new voice-operated virtual assistant similar to Apple's Siri and Amazon's Alexa. Depending on trim level, the gauge cluster is either analog with a 4.1-inch screen or fully digital with a big 12.3-inch panel.

8. The Interior is More Practical Than Ever 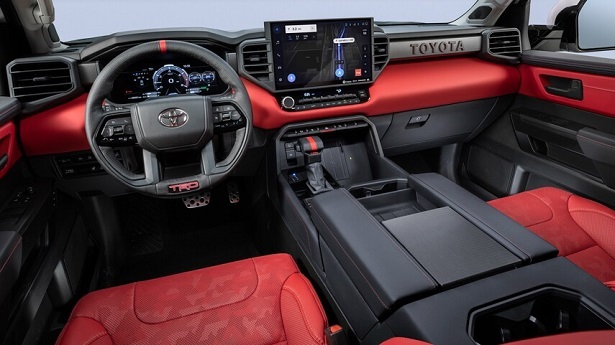 You really shouldn't look at the interior of the outgoing Tundra. Not only is it way too plasticky, but it's also bulky and unattractive. The new Tundra's interior is world's apart with improved styling, materials, ergonomics, and storage. Depending on trim level, you get improvements all around. While it's still very truck-like, the new interior moves into the 21st century with a new steering wheel design, a more feature-rich center console, and bigger HVAC vents that should provide better airflow.

In higher trim levels, you'll find more upholstery options including urban camo and even bright red leather that looks like it belongs in a supercar. That digital camo pattern also shows up on the outside of the truck on the fender trim, for example. It's all part of making the Tundra special... finally.

9. It Has Impressive Levels of Safety Tech

For buyers who are concerned that pickup trucks are generally less safe than conventional passenger vehicles, they can soon take comfort in the fact that every Tundra will come standard with Toyota Safety Sense 2.5 across the whole trim line. Features like an enhanced Pre-Collision System with Pedestrian Detection, emergency steering assist, Dynamic Radar Cruise Control, Lane Departure Alert, Lane Tracing Assist, Automatic High Beams, Blind Spot Monitor, Rear Cross-Traffic Alert, Parking Support Brake, and Road Sign Assist put the new Tundra at the top of the heap when it comes to tech that will keep you and yours safe. Crash tests by the IIHS and the NHTSA, of course, are pending.

10. Tough TRD Models are on the Way 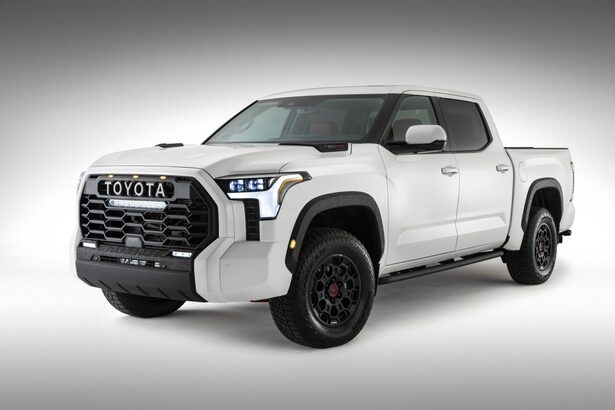 What would the Tundra be without TRD trim levels? These are some of the most coveted trims across Toyota's truck, crossover, and SUV lineup, and there's no way the new Tundra could get away without them. Not only will they receive special visual cues like trim, decals, wheels, etc., but they will also have added features like a Multi-Terrain Monitor, a 360-degree overhead view, a camera shot of the truck bed, a trailer hitch view, and even a nifty split view for each side of a trailer.

A couple of important details weren't mentioned including fuel efficiency and price. These, of course, are forthcoming prior to the truck's release, which should be later this year as a 2022 model. Only time will tell if the new Tundra can gain significant traction in the light-duty truck market that its elder sibling lost over the past few years. It looks like Toyota did its homework and has delivered a true contender.