Nissan's vision for the future of electification 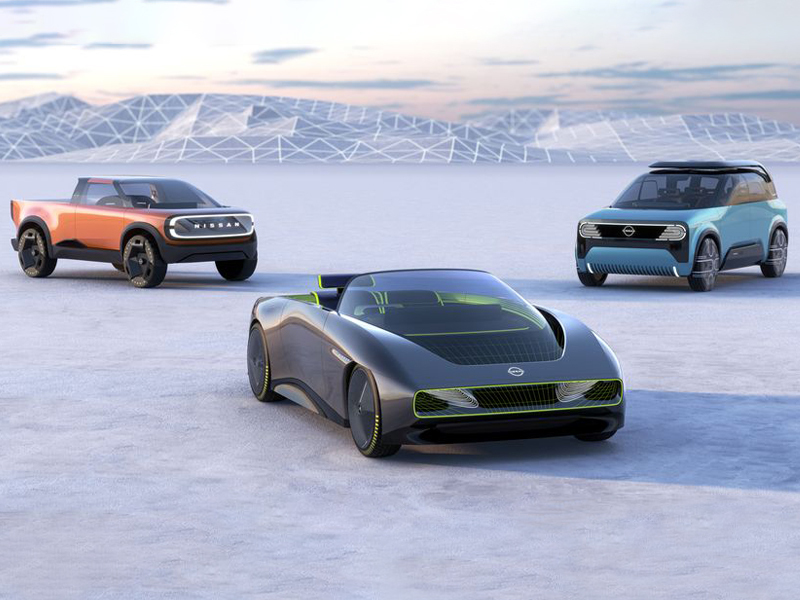 If you need to know what Nissan is about, just look at these four.

Nissan is working on its image and its product line, and most recently it unveiled its vision for an electrified future known as Ambition 2030. The dramatic lineup includes four vehicles: a pickup truck, a sports car, and two crossovers. That's a huge step up from its LEAF and brand new Ariya. Nissan's goal is to have a full 15 EV models by the year 2030 and even build its own solid-state EV batteries by 2028. 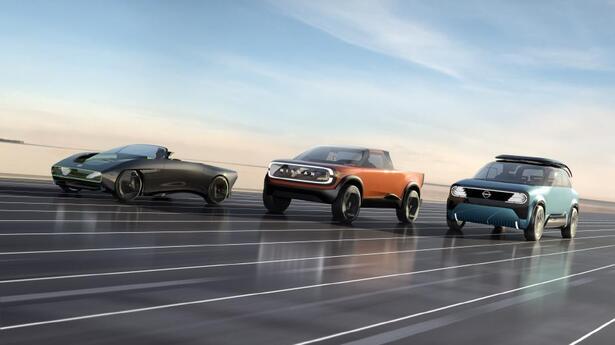 These are lofty goals, but it seems every brand is doing something similar and jumping on the electrification bandwagon. EVs are widely touted as the future of the automotive industry, and these four vehicles point to an exciting path for Nissan, something we haven't been able to say in a long time. That said, we're pretty excited about the new Z car, as well as the new Frontier pickup truck, neither of which is electric. Without further ado, here are the four new concept EVs. 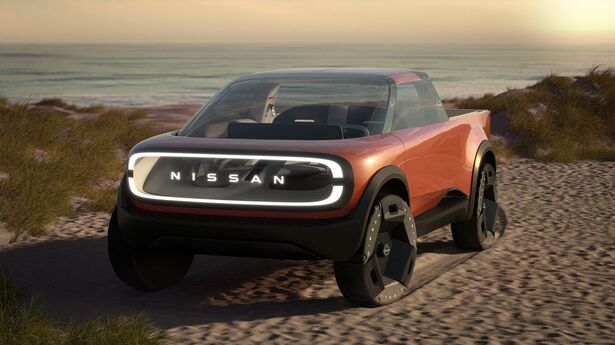 Nissan doesn't plan on ignoring the excitement of the electric pickup truck segment. The Surf-Out capitalizes on this, and it's not just efficient but truly versatile. It's a small pickup, so it's not up there with the likes of the Rivian R1T, but it boasts some really interesting features that make it a very attractive concept truck. 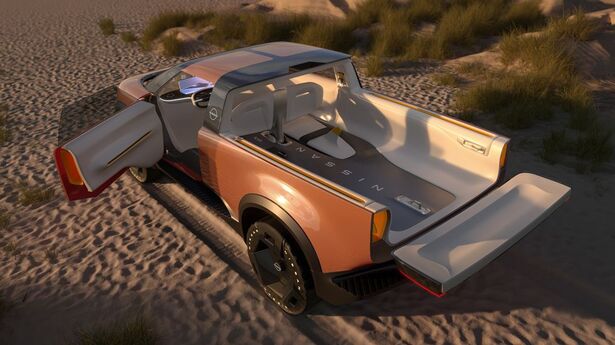 The size is a bit smaller than the upcoming Frontier pickup truck, but it looks more rakish than rugged. The translucent front end has an illuminated ring, and the tailgate has an animated LED screen that can send messages. The Surf-Out also benefits from an e-4ORCE all-wheel-drive setup and even an onboard generator. 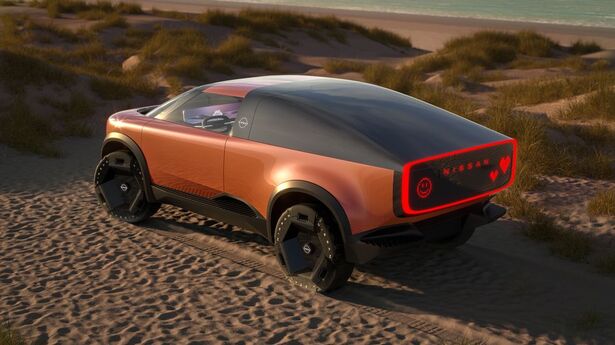 We're assuming the Surf-Out has all-wheel drive powered by either two or four electric motors, and it's clearly a lifestyle pickup truck more than an off-roader. We're especially in love with the bed cover that turns it into a sleek SUV. It's unlikely to make production in this format, but it's exciting to see how the brand is approaching electric pickup trucks. 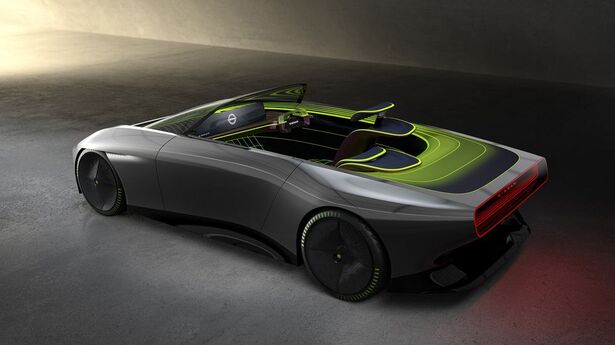 The Max-Out is the only sporty car in the set, and it happens to be a convertible. The focus is on performance rather than practicality. The light curb weight and the low center of gravity should contribute to excellent acceleration and handling. The two seats have multiple configurations and can even go flat into the floor. The coolest part might just be the raked windshield that transitions into a translucent portion over the hood and drops into the front fascia where the gridded geometric headlights are. 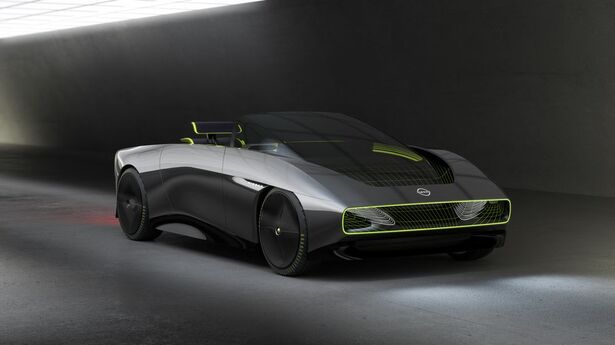 The long and unique front end, big rear haunches, disc wheels, and the neon yellow illumination inside and out give it a truly futuristic look. The Max-Out represents a very original design that uses some classic sports car shapes while looking very much 22nd century. The likelihood that Nissan will pursue this as a production model is slim since the two-door convertible segment isn't exactly hot. We'd love to see this come to fruition in some format, even if it isn't as cool as this. 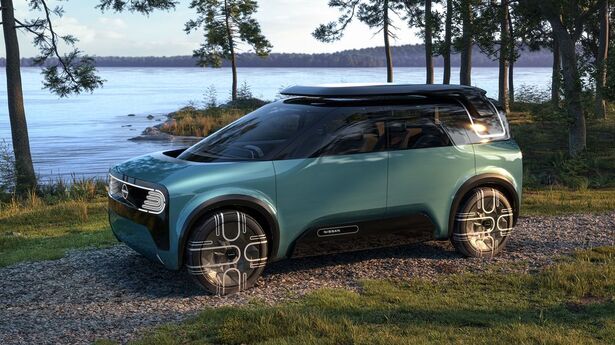 One of the two crossovers in the lineup is the Hang-Out, and it's the most relaxed and family friendly vehicle in the new EV group. It actually looks like the future of car camping, and there are more surprises inside. The interior is meant to be spacious thanks to the tall roof and the low floor. There are four seats inside that rotate and slide, and there's even a movie screen and projector for a lounge-like experience. 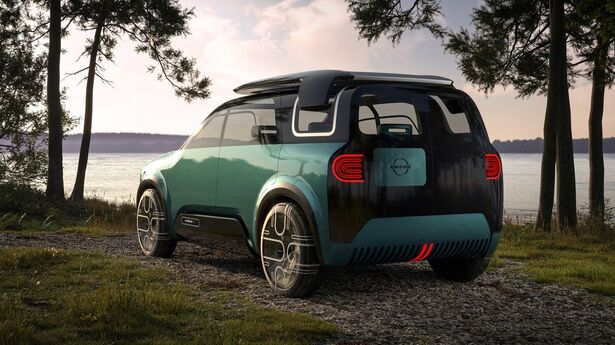 The cool, asymmetric rear end looks a lot like the legendary Nissan Cube's, and the futuristic patterned wheels extend to the tire'e sidewalls. Just like the other vehicles here, the Hang-Out gets the  e-4ORCE all-wheel-drive setup and ProPilot driver-assistance tech. While it's very futuristic wit the fresh roof rack and the huge glass canopy, we love the '80s-like brake lights. 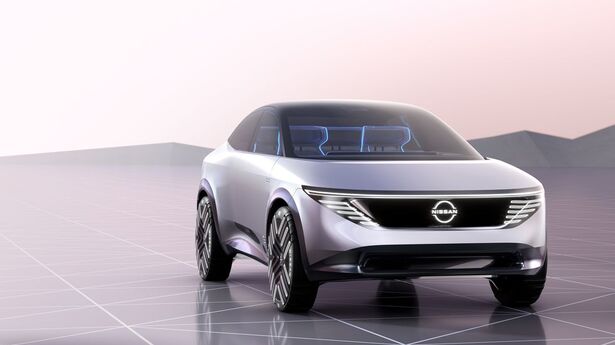 This is the one concept that's most likely to see production. While it has some radical features like four swiveling and sliding seats, most of the rest of the Chill-Out seems very practical. The front end is a lot like the new Ariya EV crossover, and the rear fascia has a full-width black swath with some very cool taillights and the Nissan name embedded within. 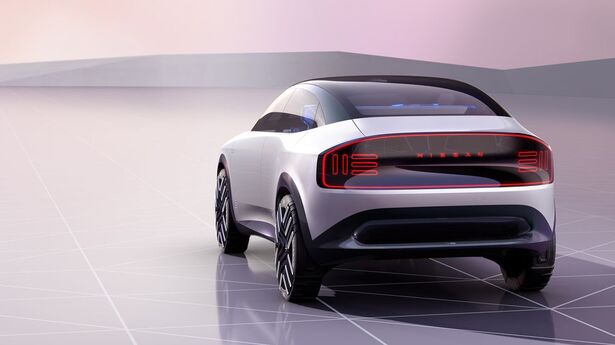 The Chill-Out rides on Nissan's CMF-EV platform, and it's smaller than the current Ariya. The subcompact EV crossover should actually see production pretty soon, and it will slot in below the Ariya's  $47,125 price tag.

Nissan is doing some pretty exciting things with this set of concept vehicles, and it's about time given the fact that they seemed to have rested on their laurels for a bit too long. We hope these will see the light of production at some point and in some form represented here, but we also hope the brand will redesign the Maxima, Murano, LEAF, and the awesome GT-R before they go all electric on us.

Look for more news to come from Nissan in the near future about these big plans for EV models. Other claims include a new battery plant set to open in the U.S. by fiscal year 2025 and for EVs to make up 40 percent of the company's U.S. sales by fiscal year 2030.