The 2024 Chevy Silverado EV Debuts with Hummer Looks, 400 Miles of Range and Up to 664 Horsepower

Late to the game but, boy howdy, what a truck 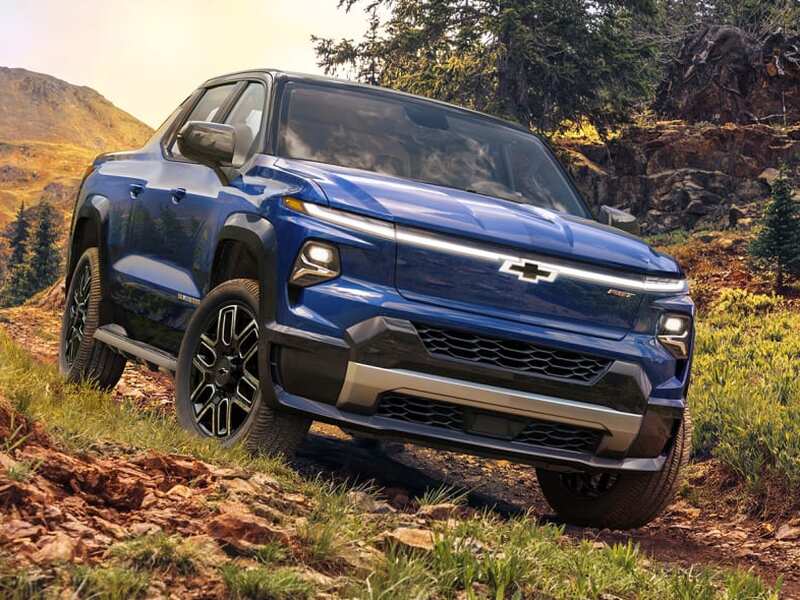 What do you get when you combine the two hottest segments in the automotive industry, pickup trucks and EVs. Well, you get the most heated battle going on right now, at least based on what we see. The The new 2024 Chevy Silverado EV has been unveiled in production form, and it will go up against the likes of the Rivian R1T and the Ford F-150 Lightning. 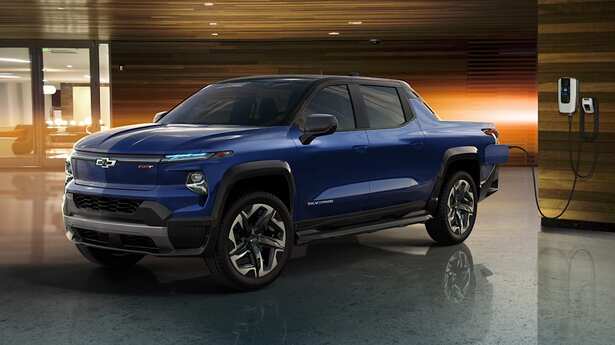 Based on the details from today's official reveal, the new Silverado EV is no also-ran. In fact, we were truly surprised by its design, power, range, and utility. Not only does it look commanding with its strong presence, but it also has all the important details a competitive electric pickup needs. Let's take a closer look. 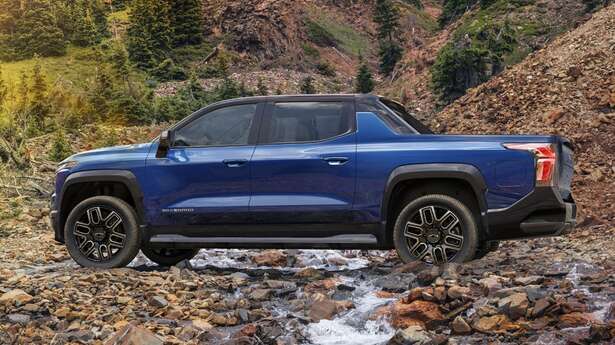 In terms of power, the Silverado EV is no slouch. The consumer version known as the Silverado EV RST will have two motors good for 664 horsepower and 780 lb-ft of torque in sport mode, otherwise known as Wide Open Watts or "WOW" (yes, really). It should accelerate silently to 60 mph in less than 4.5 seconds, which is pretty quick. While it's not as rapid as the Rivian R1T (3.2 seconds), it's easily quicker than the F-150 Lighting (5.5 seconds). The Silverado EV WT (Work Truck) won't be as powerful with 510 horsepower and 615 lb-ft of torque. 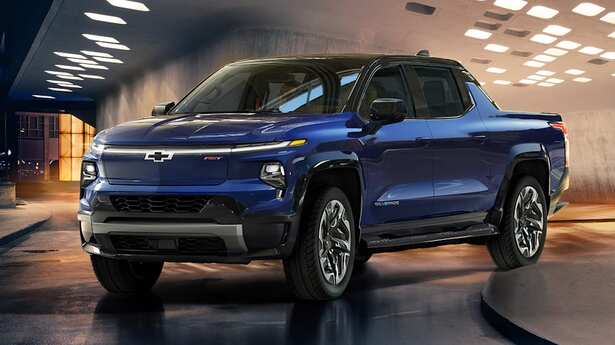 Both trucks will get an impressive 400 miles of range, and they support 350-kW DC fast charging that will add 100 miles of range in a mere 10 minutes. The RST will tow 10,000 pounds and carry 1,300 pounds of payload, while the Work Truck will tow 8,000 pounds and manage a payload of 1,200 pounds. Those are solid numbers that should make the Silverado competitive in the set.

It's a Truly Practical Pickup Truck 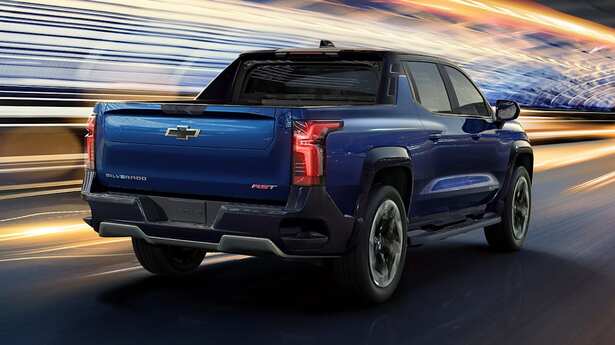 There are some nifty features on the Silverado EV made possible by its EV platform. You'll notice that it doesn't look like an actual Silverado gas pickup truck because the lack of a front-mounted engine allows the cab to be moved forward to create space in the cabin. The truck looks different, as a result, and the Hummer-like C-pillars give it a totally different look from its petrol sib. 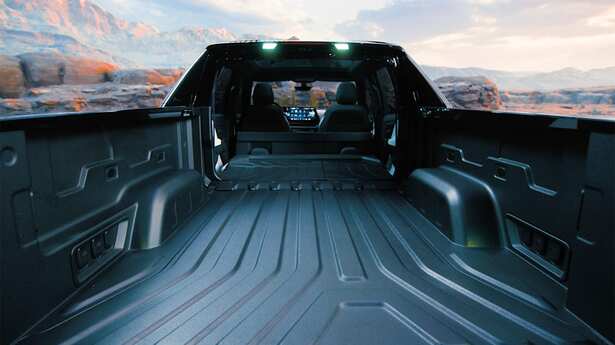 Need to put some seriously long gear in back? No problem with the Midgate.

The most notable storage feature is the Midgate, a feature once found on the now-gone Chevy Avalanche. This feature allows longer items to use the cab space instead of just the bed. The bed length is 71 inches, but you can add length by dropping the body section down. And, unlike the old Avalanche's version, the Silverado EV's midgate can be split 60/40, so you don't lose the entire second row seats in the process. This feature will, sadly, not be available on the initial Work Truck models. Chevy will, however, offer the excellent Multi-Flex tailgate with integrated step on both models. 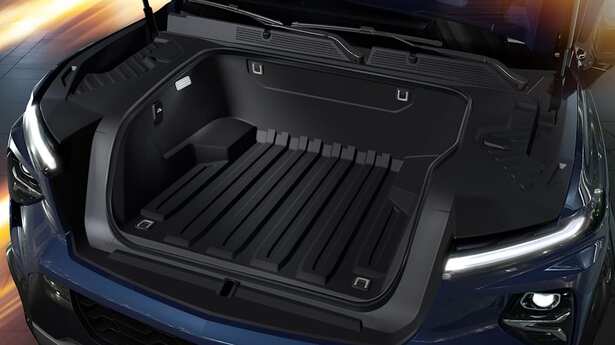 The front trunk is also a great place for storage. Power open/close is also optional on this feature. The dimensions weren't disclosed, but GM did say it could carry three pieces of luggage. From the looks of the photo, we'd say they're pretty accurate, as long as you don't try to shove three full-sized rollers or foot lockers in there. It's clear that the Silverado EV has enough space for most folks and competes nicely with Rivian and Ford's offerings.

Tech and Ample Space Inside 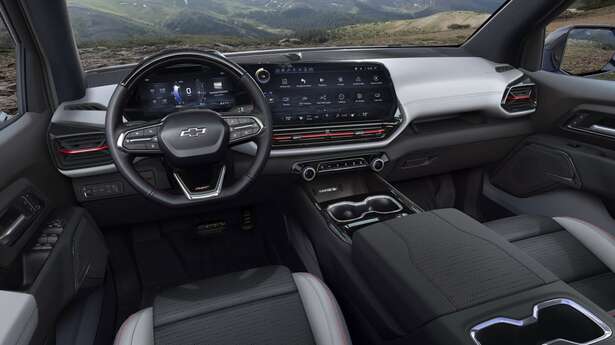 GM is taking full advantage of the next-generation EV by giving it a truly futuristic interior. It looks less like a pickup truck's cabin and more like a truly refined SUV. There's a massive 17-inch infotainment screen that's on the RST, and it occupies a significant amount of dash real estate. It's also integrated with the digital instrument cluster. The Work Truck will have a smaller rectangular screen. 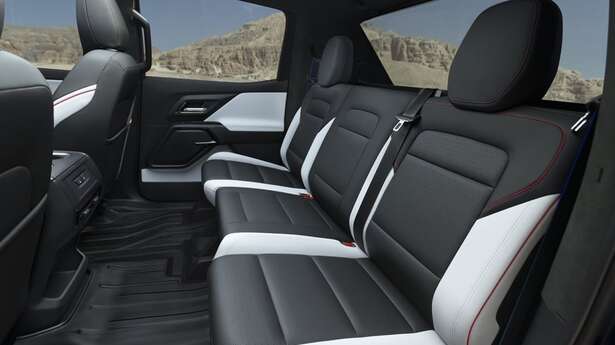 The flat floor and gobs of legroom should make the Silverado EV a great family vehicle.

There's also ample amounts of storage in the front with a big center armrest, shelving in the dash, and large open binnacles. In the back, the rear seats look wide and provide a completely flat floor with limo-like legroom thanks to the battery floor and a lack of transmission tunnel.

The base model work truck will start at an affordable $39,900. The consumer RST First Edition will go for a rather pricey $105,000, but it is fully loaded with the following features: 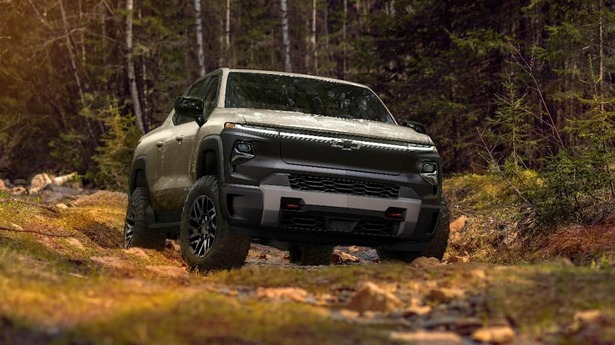 The Trail Boss looks a bit more conventional in front. It's hard to tell from the photo if there's a faux upper grille or if it's solid like the RST's. We do know that it has a revised lower bumper, blackened  headlight surrounds, and recovery hooks. Whether or not it will get the GMC Hummer EV's Crab Walk or four-wheel steering or not remains in question.

GM isn't messing around when it comes to its new Silverado EV, and it should prove to be a true contender in the segment. We can't wait to experience it in a little more than a year.