Review: The 2022 Mazda CX-9 Signature AWD Goes To Colorado For a Ski Trip 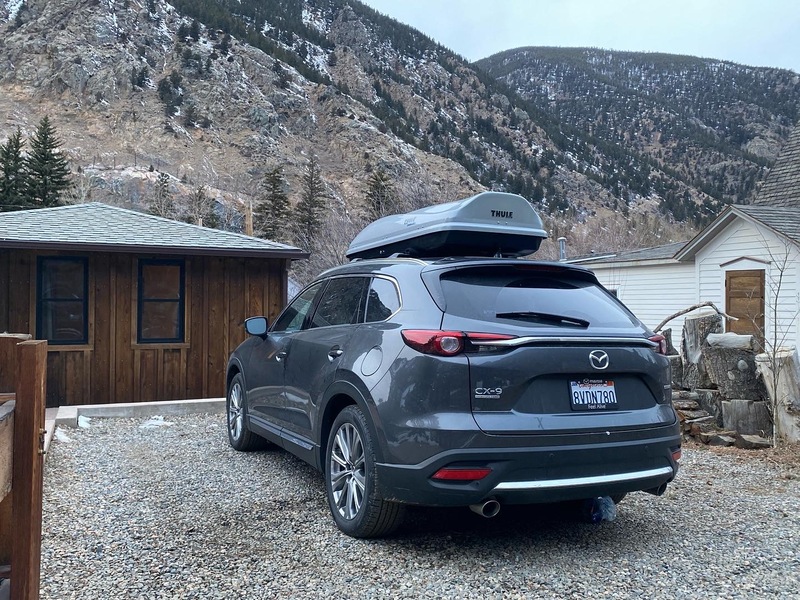 Another road trip conquered by the excellent CX-9.

The Mazda CX-9 three-row SUV has been around in its current form since 2016. That's actually hard for even us to believe because it's just so damned good to look at, to drive, and to sit in. This is all testament to Mazda designers and engineers who created a mid-size SUV that's dynamically and ergonomically brilliant. We can't think of a three-row SUV that still looks this good and drives so well compared to the competition after six years on the market. Frankly, Mazda could continue to see the CX-9 in its current form for a few more years without it seeming even remotely dated. 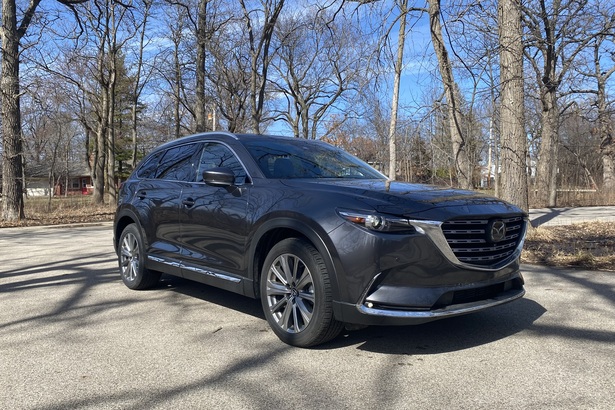 No way does the second-gen CX-9 look like it's been around for six years.

We've now driven it on two major road trips with our whole family of five and loaded to the gills. Our first was to Hilton Head, SC during the height of the pandemic, and most recently to Colorado for a family ski trip. Why the CX-9 again, you say? Well, we wanted to see how well the biggest Mazda holds up when newer competitors have emerged more recently. It's certainly in a crowded field of very good competitors. While the CX-9 might not be nearly as big as some of its competitors (Honda Pilot, Toyota Highlander, Hyundai Palisade, Kia Telluride, Ford Explorer, and Chevrolet Traverse), it is hands down the best one to drive. 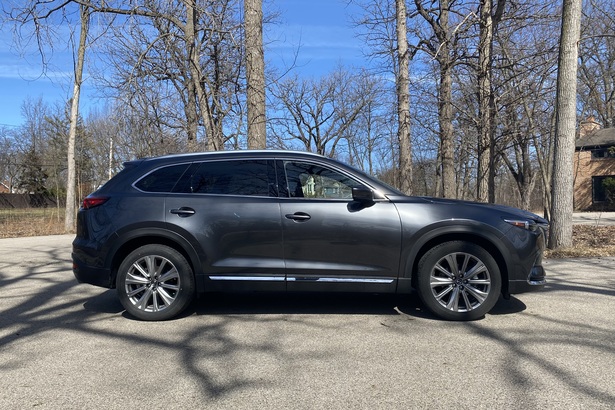 Here are the specifications of our test vehicle:

The Styling More Than Holds Up Well 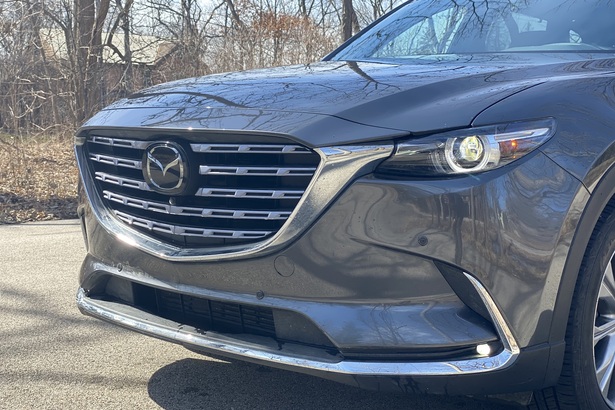 There are plenty of family-friendly three-row crossovers out there to choose from. Not all of them are attractive. The CX-9, however, still manages to lead the pack in terms of its looks. Of course, some of the svelte styling sacrifices interior space, but the result is vehicle that looks incredible from just about every angle, and this is after six years on the market. It might be nearing then end of its life (soon to be replaced by the bigger and even more upscale CX-90 sometime next year), but the CX-9 still pulls off head-turning looks. 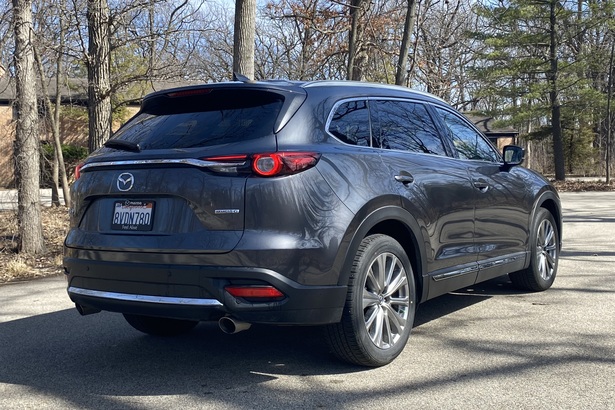 From front to back, the CX-9 looks both sporty and sophisticated with more muted styling cues than the Hyundai Palisade or the VW Atlas. The only large styling cue is the big shield-shaped grille whose perforated five-bar pattern manages to tone things down compared to some of the competition's somehwat garish versions. We would call the CX-9 tastefully stylish. It's not trying to be in-your-face but rather classic and handsome. It's a good reason why it's held up so well. Trendy looks tend not to last beyond a couple of years. 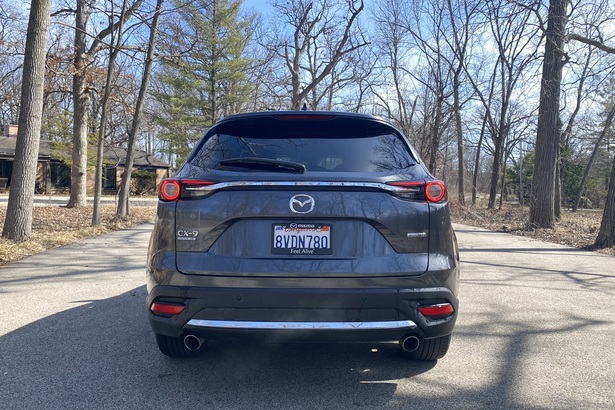 The taillights mimic the thin headlights, and the thin chrome bar that unifies the taillight housings is the perfect punctuation. Other details like the dark chrome wheels, the gently sculpted body, the round tailipipes, and the slightly raked D-pillars give the CX-9 a great presence. There isn't one detail that screams for attention, and everything comes together so well. The sum is truly greater than the parts. Mazda hasn't even changed the CX-9 much at all since its inception. Only the perforations to the grille bars were added in 2021. Not many vehicles look this good after this long. 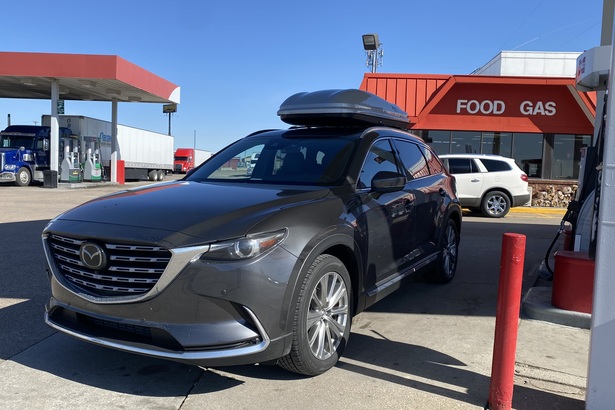 We loaded the car with kids, skis, luggage, and a ton of vacation gear. Mileage was decent.

One thing we can unequivocally say about the CX-9. It manages highway driving like champ. We've said it before. The lack of steering correction required at highway speeds, combined with great sound insulation, excellent shock absorption, resistance to crosswinds, and superb handling make the CX-9 so much easier and relaxing to drive than many of its competitors. Over multiple hours of driving through  four states (Illinois, Iowa, Nebraska, and Colorado), the CX-9 proved nearly flawless at speeds of 70+ mph. Executing lane changes, accelerating on ramps, passing, and getting on the brakes quickly when needed posed no problem for the CX-9. 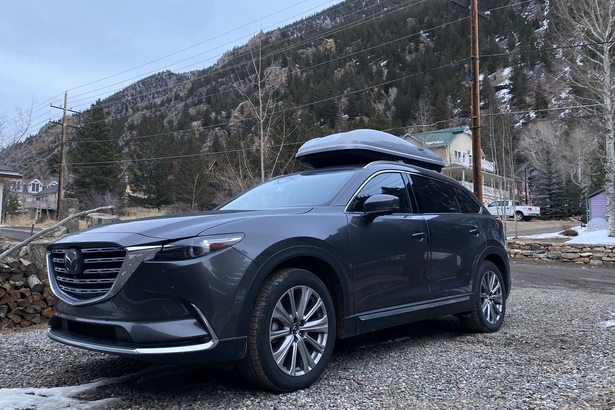 Our one chagrin was the adaptive cruise control (known as Mazda Radar Cruise Control (or MRCC) with Stop & Go function), which takes a bit too much time to accelerate when attempting to close the distance to the vehicle in front. Every time a vehicle pulled out of the lane in front of us or we moved into the passing lane, the CX-9 seemed to take too much time to get up to speed. It's by no means lacking power, as the turbo-four is responsive and powerful even when the vehicle is fully laden, but it seems to lack that throttle response when the millimeter-wave radar system senses the vehicle in front. It's not a dealbreaker, but Subaru's system is much quicker to respond. 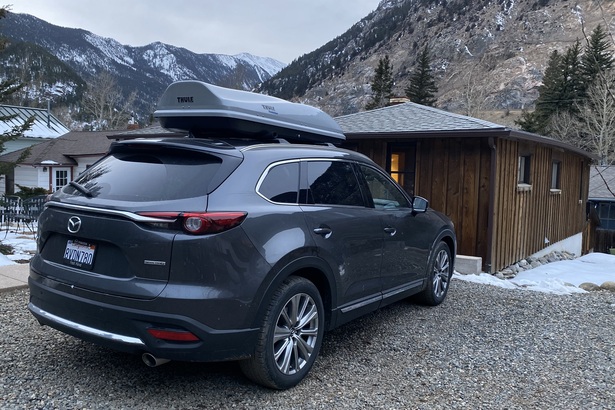 We made it to Georgetown, Colorado in sixteen hours, and the CX-9 crushed it.

Other than that, there are pretty much zero complaints about the way the CX-9 drives. It's one of the best three-row SUVs to helm. I would rather be a bit shy on cargo space (and pack lighter, a coveted skill) than drive a three-row SUV that's ponderous on the highway and pretty much zero fun to drive. Mazda reminds us all that you can have an SUV that drives like a sporty car. Perhaps the only other issue we can think of is that the turbo lacks power at higher altitudes, not a big surprise. At 8k feet above sea level, the air is much thinner, and the drop in power is somewhat noticeable. 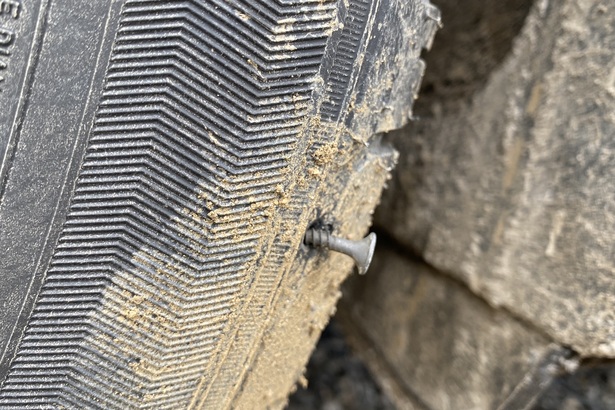 On a side note, we encountered a couple of drywall screws while driving around our Airbnb in Georgetown. Unfortunately, there were two of them and one ended up in the shoulder of the right rear tire, requiring a replacement. The second screw was in the left rear treadwall, so we actually drove 30 miles on it without a problem. Who leaves drywall screws outside is beyond me. On the bright side, swapping out the full size tire with the donut was pretty easy. I scanned our gravel driveway every day for the next four days. No fun.

The Interior is Awesome 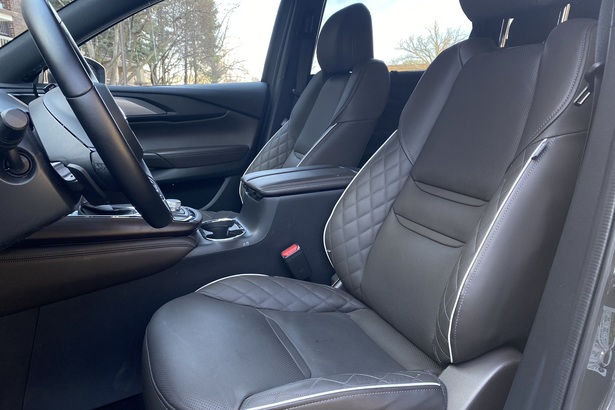 Vehicles these days tend to be festooned with too much tech, and it can be distracting, hard to use, and downright ugly. Hell, we dare to say that most drivers don't even know how to use everything. Mazda purposely makes everything easy to use and provides great physical controls and uses technology only when it's convenient. They don't plunk giant 12" portrait-oriented screens on the center stack, and they don't use touchscreen climate controls. They don't even have a goofy non-traditional shift lever or a configurable instrument cluster. Are these things nice to have? Yes. Are they helpful? No. 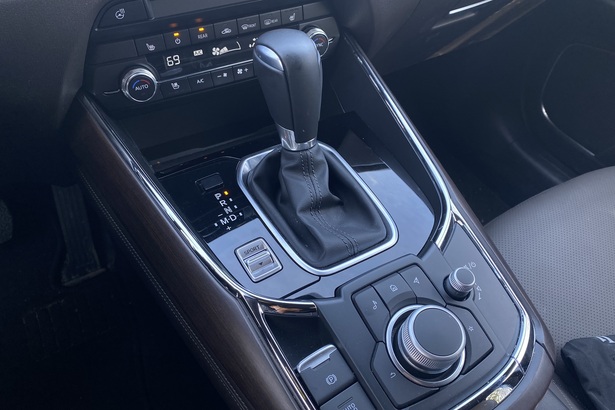 While the traditional shift knob takes up space on the center console that could otherwise be used for storage, we like the action of it. The accompanying steering wheel-mounted paddle shifters also work very well and respond to inputs quickly. The climate controls, audio controls, and the excellent Mazda Commander center control knob all work perfectly. You don't need to use the touchscreen at all when you have the knob and corresponding buttons right in front of you and easily reachable when your elbow is resting on the armrest. 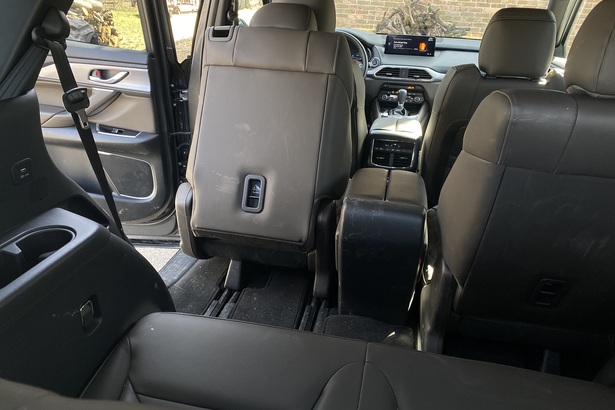 It's really only good for kids back here in row three.

The one issue big families might have is the legroom in row three. It's great for kids, but it's not going to work for adults on long trips. There's no way I could've sat back there for a trip to Colorado (thankfully, I was the only one driving). 29.7 inches of rear legroom is tight, and with the second-row captain's chairs, you can only have six people in the car. We had to fold down the left portion of the third row in order to accommodate for luggage, and there's no way we could've comfortably held all our ski gear without the roof rack and our Thule roof box. 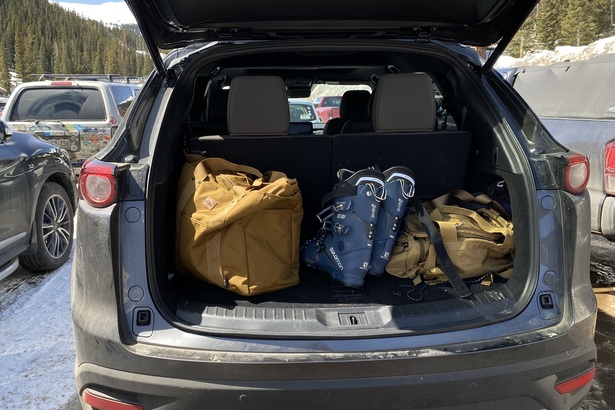 Cargo space in the CX-9 isn't capacious, but we made it work. There's only 14.4 cubic feet of cargo room behind row three, but the 71.2 square feet with both rows folded flat is actually not bad. We just couldn't capitalize on that with me, my wife, and three kids in the car (because of the captain's chairs). That said, we shoved some gear into the second and third row footwells. The CX-9 didn't swallow the gear, but we didn't have to leave anything (or anyone) behind. 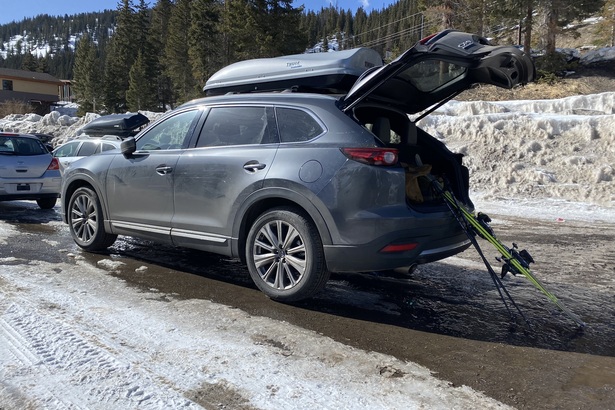 You can easily drive over 2,600 miles in the CX-9 with two adults and three kids with a boatload of gear if you have a good roof rack. It might not be an ideal situation for most big families, but the CX-9 more than makes up for the deficit in interior cargo and passenger room with great driving dynamics, superb interior appointments, excellent analog controls, and near-peerless highway manners. We will surely lament its departure when that happens, but no doubt Mazda will continue the greatness with its successor.