How Honda Got Its Mojo Back

Honda has had a tough time of it in the last decade or so, underwhelming critics and the public with many of their new models and letting their core models languish with outdated design and performance. But Honda is nothing if not smart, and it quickly reversed this trend and, with both the 2014 Accord and the 2014 Civic, went back to doing what they do best: building cars with performance and spirit far outside their classes.

Civic seemed to fall the farthest in the dark years, so it's doubly satisfying to see the 2014 Civic get everything so right. From the sporty overhaul given to the exterior and interior designs, to the nicely revived performance of the engine, this Civic does everything the Civic is meant to do. And then some.

Giving the exterior a sporty edge was the right move; it reminds consumers that the Civic isn't just a smaller Accord. For one thing, it's a car that's best enjoyed in coupe form (which is how it was originally released in 1972), and ideally with a manual transmission (although we were happy enough with the CVT, even though we made liberal use of the paddle shifters to downshift in the pursuit of higher revs).

As part of Honda's attempt to move the Civic slightly more upmarket, the interior has been retooled and outfitted with a surprising number of once-luxury-level features, like touch-screen navigation, leather-wrapped steering wheel, and heated seats.

The once-clumsy looking shroud that forms the upper tier of the dashboard displaying the car's speed along with other information (such as how "green" your driving is) now matches the rest of the interior, which has a cockpit-like feel to it that is at once satisfyingly sporty and incredibly ergonomic.

The 4-cylander i-VTEC engine does its best, which is pretty good, but real enthusiasts will want to opt for the STI to get their speed fix. But just because it's not the most spirited Civic doesn't mean there isn't plenty of gas-wasting, corner-drifting, red-line-kissing mayhem to be achieved behind the wheel.

Honda seems to have nailed the steering and handling on its cars this year, and anything the Civic lacks in zero-to-sixty power it more than makes up for in its ability to perform any maneuver with competence and precision.

Honda currently has the most user-friendly navigation interfaces as well, and their current 2-screen design simplifies the interface by offering the most commonly used controls on the lower screen.

Material quality is also rather higher than expected for a car at a sub-30 price point. Honda is clearly trying hard to right its wounded reputation, which is good news for Civic buyers.

Whatever was ailing Honda in the previous decade seems to be in full remission, assuming it hasn't been cured. The Civic is an excellent economy sports car with unbeatable mpg numbers, plenty of useable space (except for full-size adults who want to sit in the back), and more than its fair share of whatever it is that car companies refer to as "fun-to-drive." It's been a long time coming, but the Civic is back, baby.

Shopping for a used
Honda Civic? 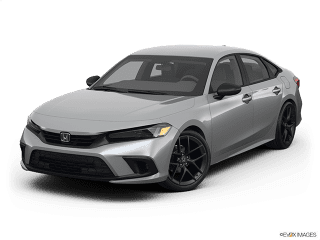 Civic seemed to fall the farthest in the dark years, so it's doubly satisfying to see the 2014 Civic get everything so right.