With a name like Veloster, it must be fast, right?

The Hyundai Veloster is rather odd, and we mean that in both the good and bad senses of the word. Its most striking feature is the sloped roof that becomes the top half of the car's kammback (the technical name for this style of sloping hatchback). There are other interesting lines, angles, and protrusions, but the roof is what gives the Veloster its odd looks. It's not a new design feature. It's been seen on the AMC Eagle, the Honda CRX Si, and of course, the dreaded Pontiac Aztek.

Whether you can stomach the look will go a long way toward determining whether or not you like this car (that's more or less true with all cars, but more so with a car as unique as this). And you'd better like the design of the Veloster, because other than its looks and its surprisingly ample storage, the Veloster doesn't have a whole heck of a lot to offer.

Based on the sporty design and the name, which kind of implies that it's fast (although to be fair, the word "velocity" only implies motion, not quickness), one would expect the Veloster - especially one with a turbocharger and a manual transmission - to be fun to drive. Unfortunately, its driving dynamics don't live up to either its name or its sporty design.

Even a turbocharger can't breathe enough life into the Veloster's 1.6-liter fourÂ¬-cylinder engine to nudge it past the "good enough for everyday driving" power level. Turbo lag is an issue as well. The Veloster zips from 60-80 fairly quickly, but getting up to 60 takes nearly 7 seconds, which is slower than its competition (the VW Golf GTI and the Ford Focus ST both best it).

Of course, speed isn't everything (although it seems like it should be with a name like Veloster), but it's not just that the Veloster is un-peppy. Put a six-speed manual in any small car and there is fun to be had - and that's the case with the Veloster. It's just that with this car, you really have to work to get any life out of it, and even then, it always feels underpowered and weighted down by turbo lag.

However, if you're not concerned about whether or not your sporty looking compact feels sporty on the road, the Veloster is an extremely practical car. The storage afforded by the kammback, especially with the second-row seats folded, is surprisingly ample, and the Veloster gets decent mileage, claiming 33 on the highway and 24 in the city, which puts it in line with most of its competitors.

With the optional Performance package (the only options package available on the Turbo), it is well outfitted with a beautiful panoramic sunroof, a touchscreen infotainment center with nav, park assist and other options that are impressive for the price. The interior matches the edgy look of the exterior, and it is extremely roomy and comfortable, with a fairly reliable infotainment system, a sleek and sporty instrument cluster, and a recurring "V" motif in the angles and lines that is subtle enough to be clever rather than obnoxious.

With a bit more speed and a sportier suspension, the Veloster could easily overtake its competitors, even with its somewhat divisive style. But as it is, it's a hip-looking car that's perfect for a young family, but it isn't in any way sporty on the road. And that's kind of a problem.

Shopping for a used
Hyundai Veloster? 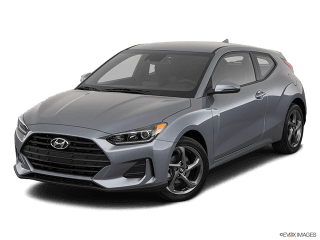 With the optional Performance package (the only options package available on the Turbo), it is well outfitted with a beautiful panoramic sunroof, a touch-screen infotainment center with nav, park assist and other options that are impressive for the price.