Five doors, no waiting: We drive the 2012 Kia Rio hatchback.

Subcompacts have long been the refuge of the poor, or so the stereotype goes. Want a small car? Want fuel efficiency? Well, thatâ€™s fine, but since you arenâ€™t ponying up the big bucks, you must sacrifice on content. Not to mention fun-to-drive factor.

So the old stereotype goes, anyway. Well, every automaker that has launched a new or redesigned subcompact in the past few years has been trying to make small cars cool again.

Enter the redesigned Kia Rio. With so many new options in the class, and with Kia in the middle of a brand transformation, Kiaâ€™s small car needs to compete with the likes of the Ford Fiesta, the Chevy Sonic, the Honda Fit, and the Hyundai Accent, which shares the same platform and powerplant.

The good news is that Kia has a good start here. Gone is the boring old Rio with a car that has updated looks and more power, thanks to a 138-horsepower direct-injection 1.6-liter four-cylinder. There are two body style choicesâ€”five-door hatch and four-door sedanâ€”and three trims: Entry level LX, mid-level EX, and sport-themed SX. We tested an EX five-door.

Shopping for a used
Kia Rio? 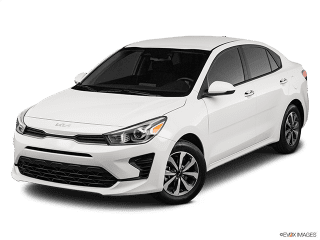 Every automaker that has launched a new or redesigned subcompact in the past few years has been trying to make small cars cool again.