The 2015 Lincoln Navigator is a relic of a bygone era. A time of great prosperity, when giants roamed the land. A time when a road-going HUMVEE sounded like an excellent idea. Wages were high, unemployment was low. The Clinton era had not yet ended, and the tumultuous days of the Bush era had yet to kick off with a bang above lower Manhattan. If you had it, you flaunted it. And bigger was most definitely better.

Back in the halcyon days of the late 1990s, the Lincoln Navigator was the shit. From rap star to master of the universe, everyone who was anyone wanted to roll up in the four-wheeled battleship that is the Lincoln Navigator. It had the size everyone wanted, the luxury everyone dreamed of, the ability to seat eight that nobody needed, and the four-wheel drive capability that no one had use for. It was the perfect vehicle for the times.

But that was a decade and a half ago. A lot has changed since then, but the Navigator has stayed more or less the same.

Shopping for a used
Lincoln Navigator? 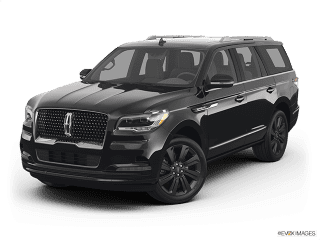 Surprisingly enough, the best thing about the 2015 Navigator is the way it drives. Lincoln has done a fine job bringing a refined, luxury-car-like feel to the Navigator.