We drive the redesigned Pathfinder

If you've ever been a bit late to catch on to a current fashion trend, you'll know how Nissan likely feels about the 2013 Pathfinder. Nissan is moving the Pathfinder from truck-type body-on-frame construction to a more car-like unibody crossover platform for 2013, following in the footsteps of its rivals such as the Ford Explorer, which underwent the same transformation for the 2011 model year.

Oddly enough, Nissan was once actually ahead of the curve. This isn't the first time the Pathfinder has gone unibody--it did the same from the 1996-2004 model years. This time, though, the change seems likely to stick. Unibody construction offers a more car-like ride and better fuel economy than body-on-frame construction, and shifting consumer tastes (buyers are trending toward car-like ride/handling over boulder-bashing toughness) and rising Corporate Average Fuel Economy standards mean that crossover construction is likely to takeover the segment.

Nissan may have joined the party late, but that doesn't mean the Pathfinder isn't trying to be fashionable.

Shopping for a used
Nissan Pathfinder? 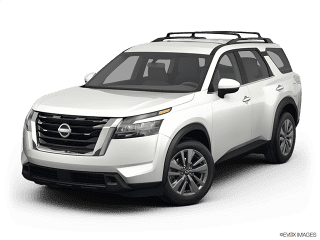