The name Camry comes from the Japanese word kanmuri, which means "crown." It follows in Toyota's naming convention, which has always bestowed a royal name on the company's primary models (Crown, Corona, Corolla), but there's no way the company could have known in 1982 just how popular the Camry would become in the next 33 years.
Now in its 7th generation in the U.S., the Camry has been given a new facelift (a full refresh came in 2011), bringing it in line with the new, and far-less-boring look that Toyota (and its luxury arm, Lexus) have come up with.

Shopping for a used
Toyota Camry? 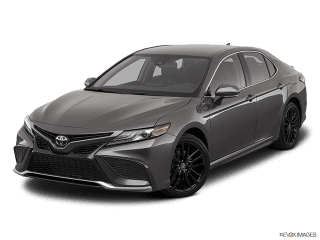 The 2015 Camry's new look (inside and out) is a big step in the right direction, and one that puts it leagues ahead of its fiercest competitor, the Honda Accord.