Toyota Reveals Special Editions and Pricing for the 2021 4Runner, Tundra, and Land Cruiser

This trio of popular 4x4s get some new digs 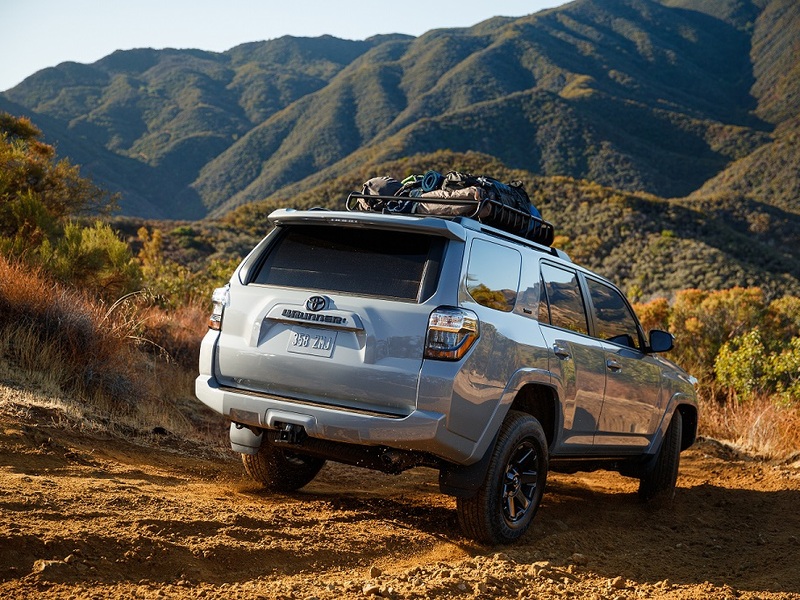 Toyota has taken the "if it ain't broke, don't fix it" strategy to heart with its body-on-frame truck and SUV lineup. Case in point - the 4Runner, Tundra, and Land Cruiser have all gone over a decade without a design. While 2021 won't be the year you'll see major changes in these models, you can look forward to some unique and off-road-focused packages. Rumors are swirling that a new Tundra will arrive for the 2022 model year, followed by a new 4Runner. For now, you can get your favorite 4x4 truck or SUV dressed up in special edition garb and new paint colors to hit the trails or the highways in style. 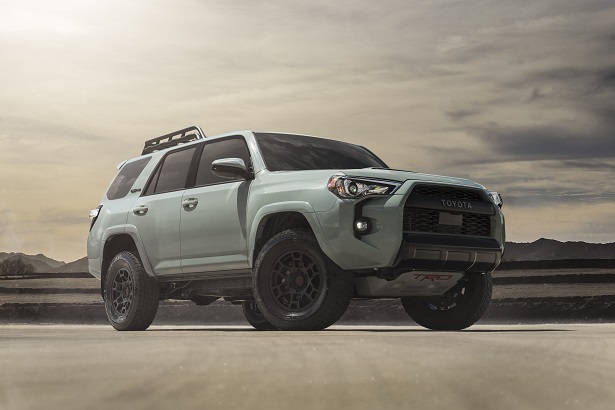 You may call the Toyota 4Runner a dinosaur as it enters 2021 without seeing a redesign in a decade. Yet, this dinosaur remains popular thanks to its rugged, body-on-frame build that is the antithesis to all the curvy crossovers flooding the market. 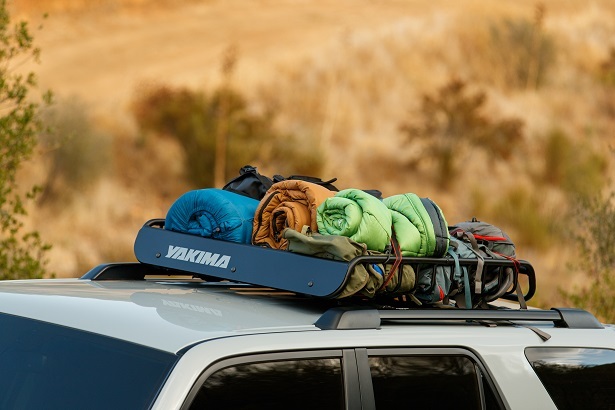 A Yakima rack and custom cooler in the Trail Edition enhances your camping adventures.

The biggest news for 4Runner aficionados is the introduction of the new Trail Edition. The special edition 4Runner focuses on increased storage, convenience, and styling for outdoor enthusiasts. Based on the SR5 model, the Trail Edition will have exclusive black badging, black seats with contrast tan stitching, standard all-weather floor liners, and the choice of Army Green, Cement, Midnight Black, and Super White exterior paint jobs.

Dark gray TRD Off-Road wheels, a Yakima LoadWarrior rooftop cargo basket, and plenty of gear storage make the Trail Edition the most adventure-ready 4Runner model. The Trail even comes with a custom-built 40-quart cooler that matches the SUV's exterior and insulates so well that it claims to keep ice frozen for up to 7 days. 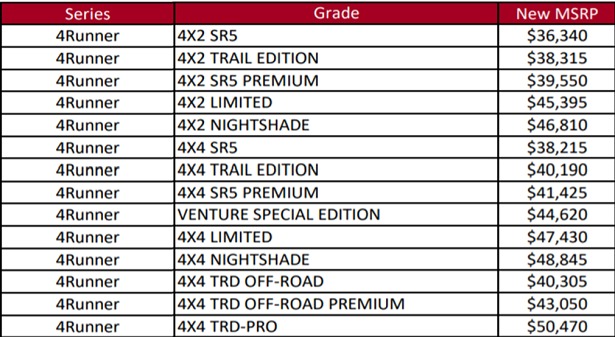 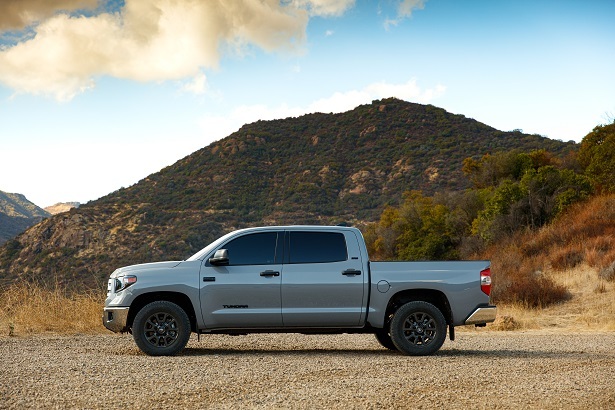 As it awaits its next redesign in 2022, Toyota dresses up the 2021 Tundra to match its 4Runner sibling. The Tundra TRD Pro can now be had in the otherworldly Lunar Rock paint color along with Super White, Magnetic Gray Metallic, and Midnight Black Metallic. 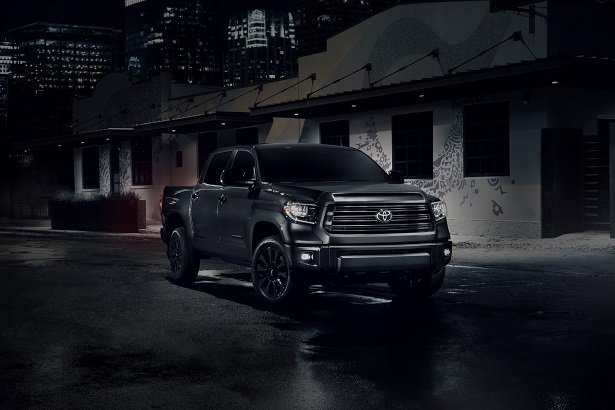 The blackened Nightshade Edition gives the Tundra an upscale and sophisticated vibe.

Along with the rugged Tundra Trail, there is also an upscale Nightshade Edition coming which is based on the Tundra's Limited grade. It will offer black leather-trim seating and black exterior trim for a premium appearance. A darkened chrome grille, black mirror caps, black door handles, black wheels, and exhaust tip give the Nightshade a sinister look complemented by the Midnight Black Metallic or Magnetic Gray Metallic paint options. 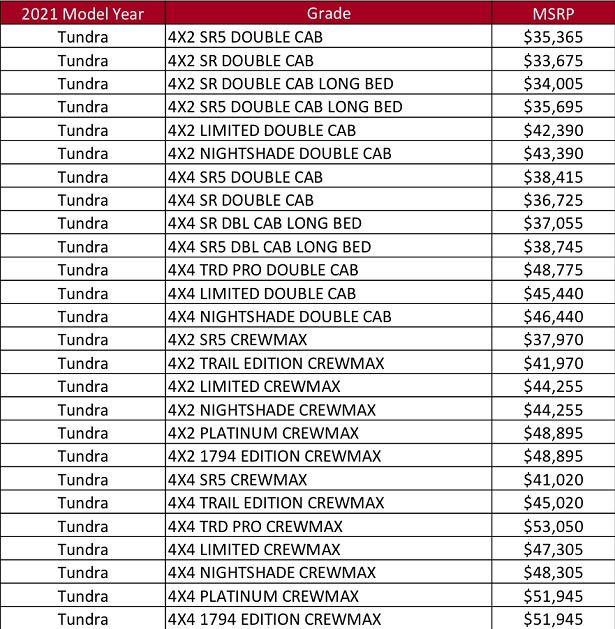 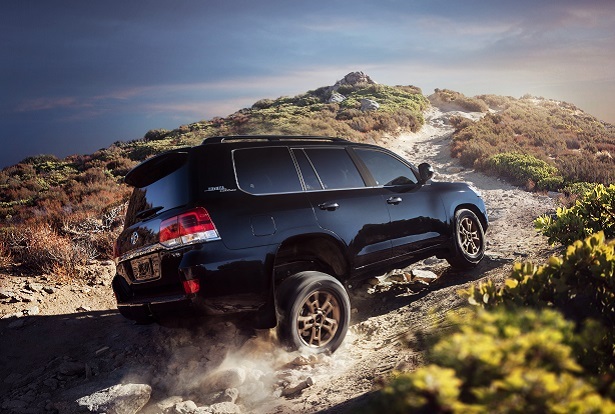 Just like the Toyota Land Cruiser itself, the Heritage Edition isn't exactly new. The off-road king in Toyota's lineup has been around for 60 years and over 10 in the current generation. The Heritage Edition was initially introduced last year and featured two rows of seats instead of the standard three to optimize cargo space. For 2021, Toyota brings back the Heritage Edition, as well as the SUV's third row for those who need the additional seating. 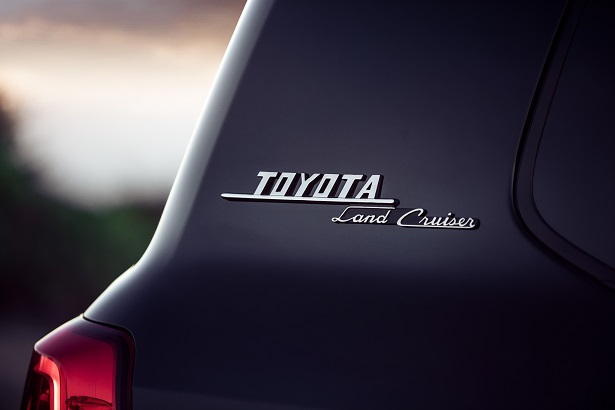 The Heritage Edition carries over all the cosmetic elements from the previous year including 18" rally-style bronze-colored BBS wheels, a menacing black grille, and a retro "Toyota Land Cruiser" badge. New for 2021 are two additional paint colors: Classic Silver Metallic and Magnetic Gray Metallic. Both two-row and three-row seating configurations will be available, with the two-row Heritage Edition starting at $85,515 and the three-row pricing still undisclosed. 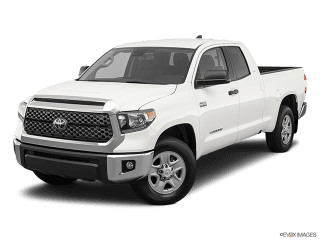