Review: The 2022 Ford Maverick Pickup is a Fresh Face in the Hottest Segment

The magic formula for the modern urban pickup 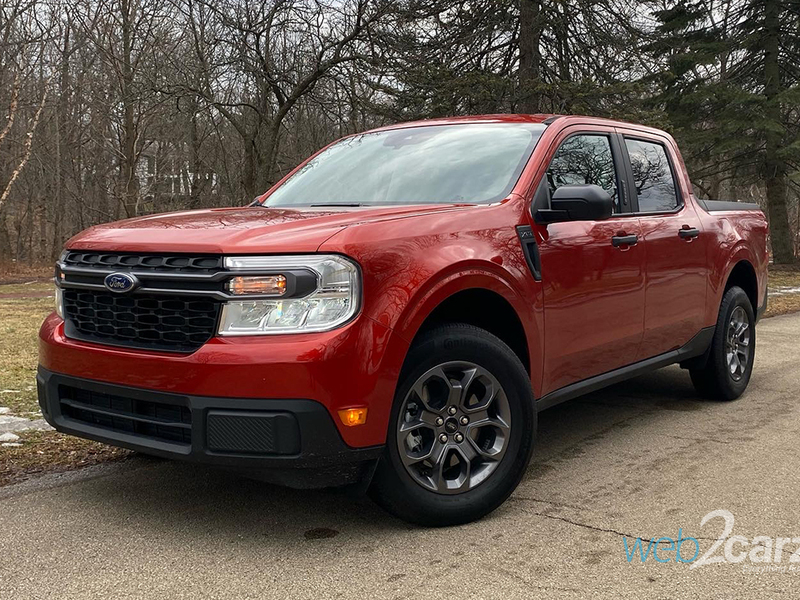 The Ford Maverick really did take the world by storm, and pretty much no one saw it coming. Instead of a hulking pickup truck, Ford created one for the general population that has widespread appeal. The Maverick is based on the Bronco Sport rather than on the F-150 or the full-sized Bronco. It's longer than the Hyundai Santa Cruz by a few inches but shorter than the Honda Ridgeline by almost a foot. In other words, just right. 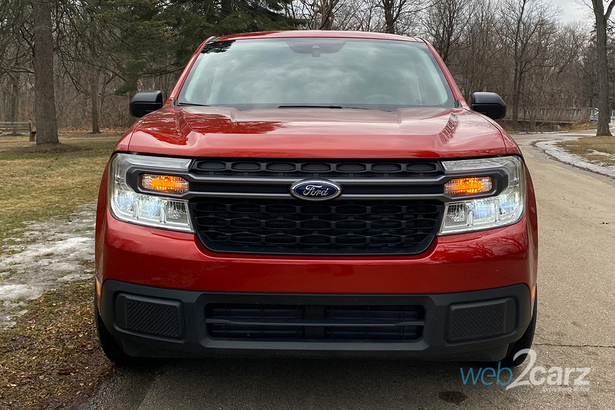 But the Maverick is more than just a small pickup truck. It's the first production hybrid pickup truck, and that's no small feat. Fresh on the heels of the introduction of the Ford F-150 Lightning EV pickup truck, it comes to the market at a time when green cars are taking the world by storm, combined with the fact that pickup trucks have always been hot sellers. We got to drive the hybrid model in XLT trim to see what this new truck was all about. 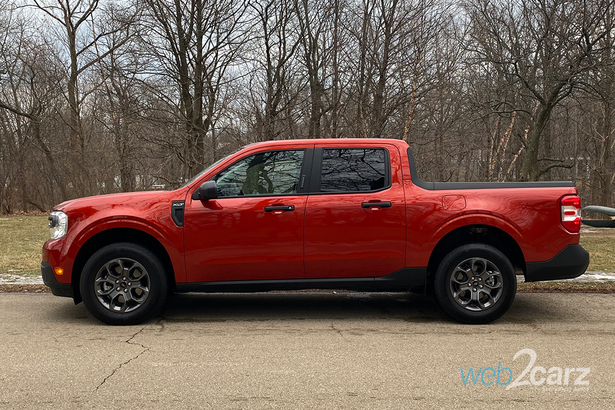 While the Maverick only comes in a single crew-cab, 4.5-foot bed configuration, there are engine choices, trim choices, and drivetrain choices. First of all, the Maverick rides on the same chassis as the Bronco Sport. All three trim levels (XL, XLT, Lariat) come standard with a 2.5-liter four-cylinder with an electric motor. The combo is good for 191 horsepower and drives the front wheels only. If you want the option of AWD, you have to get the 250-hp gas-only 2.0-liter EcoBoost four-cylinder. 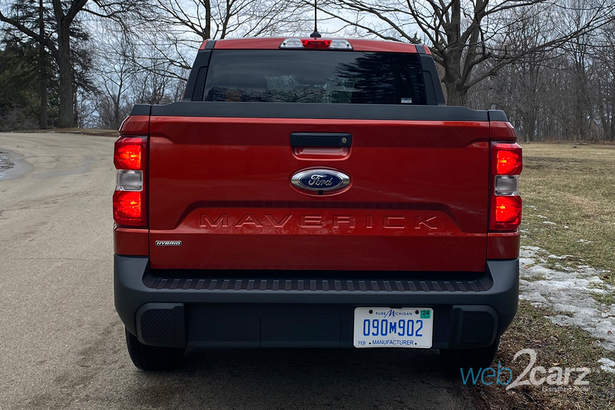 While the XL is pretty bare-bones and functions better as a work truck rather than a family vehicle or daily commuter, the mid-grade XLT adds 17-inch aluminum wheels, cruise control, a power lock for the tailgate, power exterior mirrors, and plenty of accident avoidance tech. 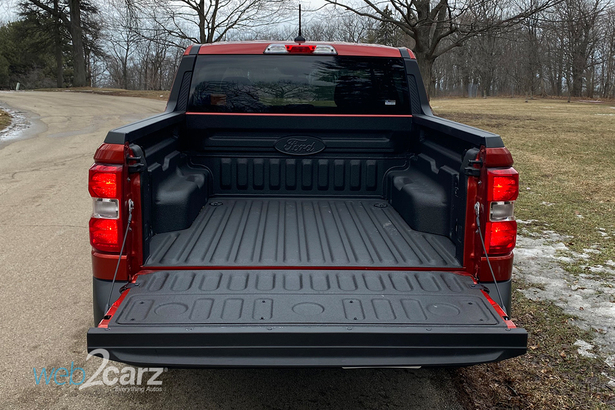 In terms of everyday utility, the Maverick has good numbers. The hybrid powertrain provides 1,500 pounds of payload capacity and 2,000 pounds of towing capacity. With the turbocharged four-cylinder and the optional Towing Package, the Maverick can tow up to a rather impressive 4,000 pounds. It's shy of the Hyundai Santa Cruz and Honda Ridgeline's 5,000 pounds. The bed isn't huge. It's a bit shorter than the Ridgeline's and slightly longer than the Santa Cruz's. 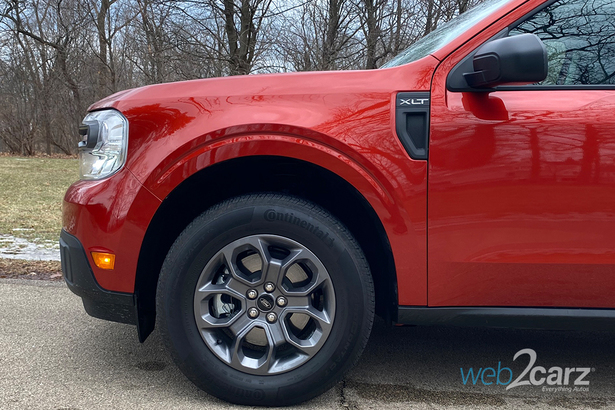 The first thing we noticed about the Maverick with the front-wheel drive setup and the hybrid powertrain was its steering effort. There's a significant amount of heft to the steering wheel effort, but it's not progressive, which feels strange. Regardless of speed, the effort to turn the wheel remains the same. It's a bit artificial, but we'd take it instead of an overly light steering feel. One negative outcome is that it feels a little on the vague side. There's also pretty much zero feedback through the steering wheel. 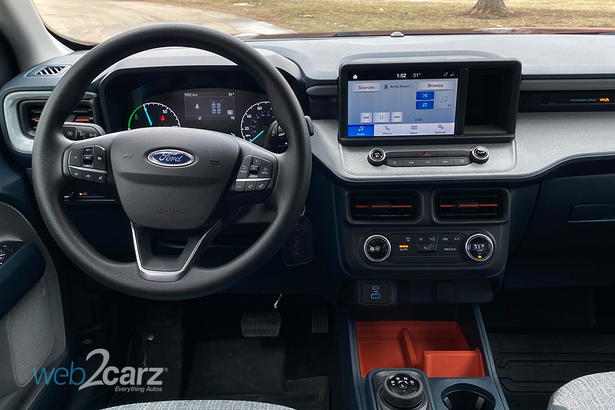 So, how's the actual driving experience once you get going? The hybrid powertrain is definitely not a rubber roaster, but it's also not terribly slow, either. It gets 0-60 in the high 7-second range, compared to the EcoBoost's sub-5-second sprint. Take note that it is significantly slower than both the Ridgeline and the Santa Cruz, which both clock in at about 6 seconds. 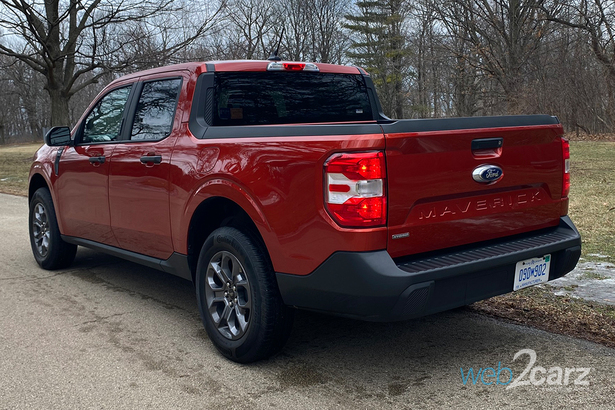 Throttle response, at least, is quite good, but the CVT is undramatic, as most of these systems are. In terms of stopping, the brakes feel both progressive and nicely firm without any mushiness or dead spots. The Maverick's ride is definitely on the firm side, but it doesn't feel jarring. We had no trouble taking it over pavement gaps and bump without issue. The Maverick feels as solid as it looks.

At highway speeds, there is some wind noise, but it's not overly intrusive. At 75 mph, you can hear some of the buffeting around the exterior mirrors and the front of the cabin. Overall, it's more than tolerable. Road noise is well dampened. Fuel economy numbers were excellent. We were able to get just under 40 mpg in combined driving. There's no pickup truck this size that can manage that, making it ideal for urban dwellers and commuters.

The Fresh and Interesting Cabin 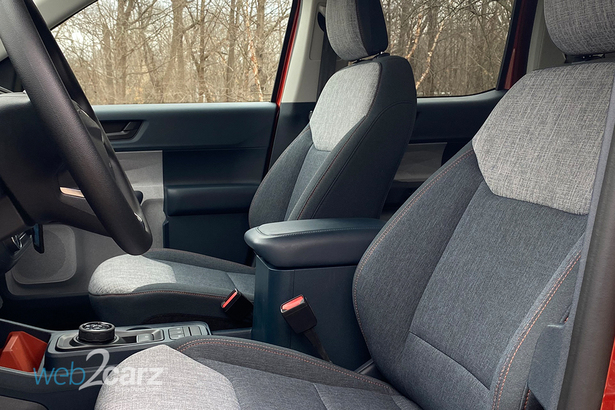 Once you step inside the Maverick, you realize how original the interior styling is. It's like nothing else we've sat in so far this year, and Ford did a great job of redefining the pickup truck cabin. The grey and orange colorway is attractive, and the fabric of the seats is grippy and linen-like. The plastic in the dash and door trim have angled creases for effect, and it gives the interior a very modern, albeit minimalist look. Many of the materials are recycled, as well, consistent with its green propulsion.

One issue we had was the painful contrast of the key ignition start against the modern cabin. To have to deploy a physical key to start the Maverick seemed counterintuitive to its cutting-edge interior styling and its hybrid powertrain. 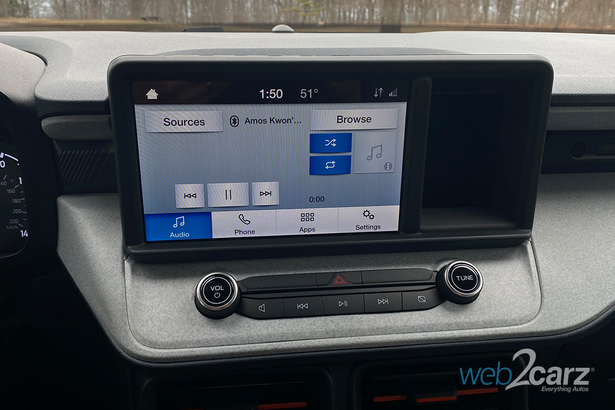 The Maverick gets a standard 8" touchscreen infotainment system and it uses Ford's Excellent SYNC 3 system. It's not the latest system of Ford's OS, but it's still very good to use. It comes standard with Apple CarPlay and Android Auto, along with an onboard Wi-Fi hotspot. Optional equipment includes SiriusXM satellite radio, an upgraded B&O Play stereo system, and wireless smartphone charging capability. There's plenty to like about the interior technology, and for this price point it's impressive. 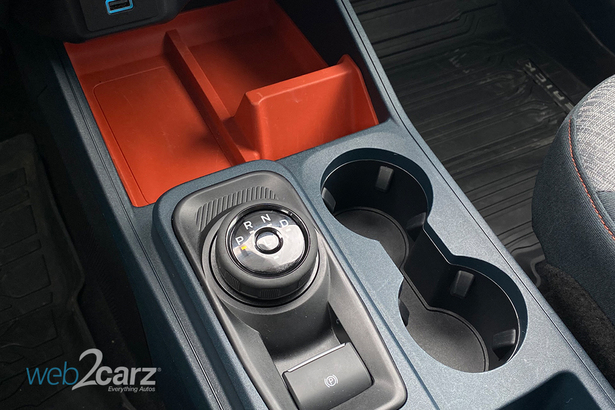 We really like the action of the rotary shifter, which is easy to grip and actuate. It's one of the better rotary systems we've used. The center console where it's situated is uncluttered and ready to take on tons of small gear items. We especially liked the angled phone holder that securely holds your smartphone (don't get distracted now), and the orange rubberized trim in the cubbies make objects easy to find and prevents them from rolling around. 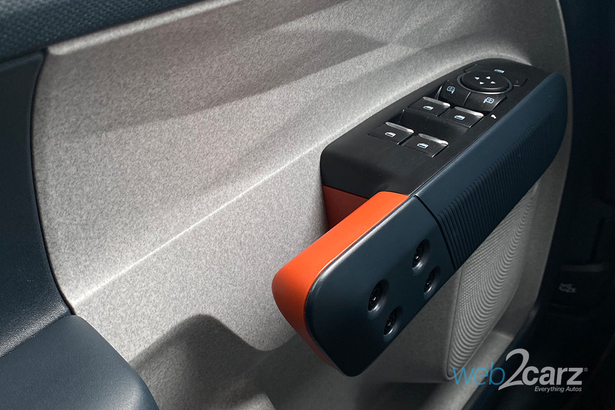 There are tons of storage cubbies in the open center console and massive door pockets. Speaking of which, those pockets extend toward the trailing edge of the front doors, to the point where they disappear. It would be easy to stick something back there and forget it. Since the bed doesn't have any storage compartments like the Ridgeline or the Santa Cruz, there's a convenient storage area beneath the rear seats. Fold up the seats, and you can stow a good amount of gear. 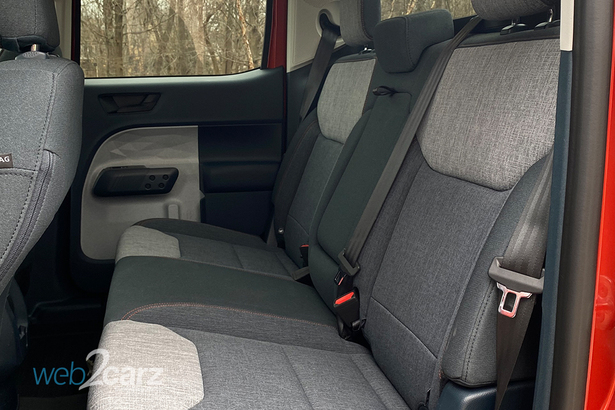 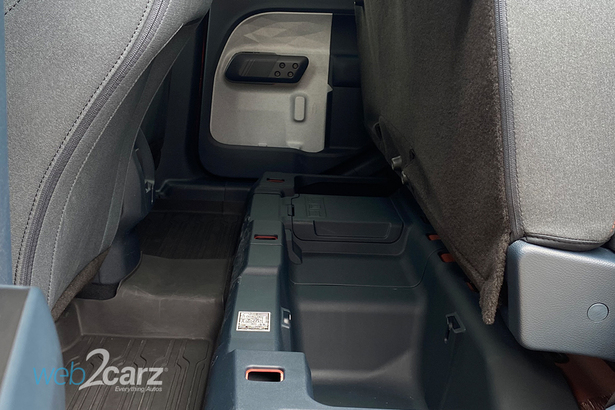 The Maverick might just be the truck that most folks need. First of all, it's priced to move. The base XL is barely more than $22,000. That's less than half the price of the average new car in America right now, and you get a lot. Even if you upgrade to the XLT trim, you're spending just a little over $25 grand, which is barely more than a base Santa Cruz.

We love the fact that Ford has done something truly different with the conventional pickup truck. More that just fresh styling, and an affordable price point, the Maverick offers hybrid efficiency (and gas for those who still want it) for their entry level truck and base trim level Maverick. It's a brilliant move, and everyone else thinks so since pre-orders are all sold out.