The 2020 Dodge Durango SRT 392 Gets the Black Appearance Package

As if the thing didn't look mean enough 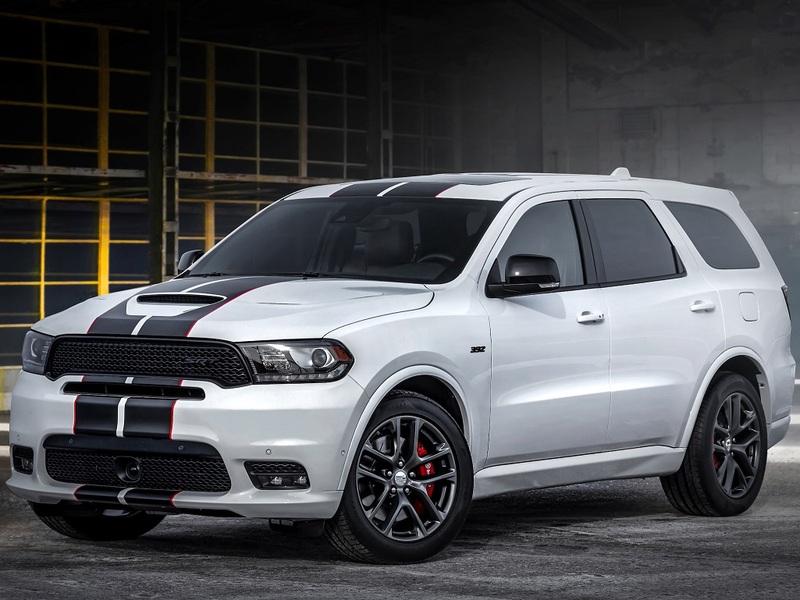 Black trim doesn't make the Durango faster, but it doesn't need to.

Just when we thought the Dodge Durango was going to go the way of the Dodo, Dodge is keeping it alive, and rightfully so. It is one of the best American SUVs out there, combining power, looks, technology, and space. The SRT 392 is even better and easily qualifies as the fastest American SUV with its monster 475 horsepower HEMI V8 engine. They've just given it more visual oomph with a new appearance package called SRT Black, as well as optional "Redline" stripes. 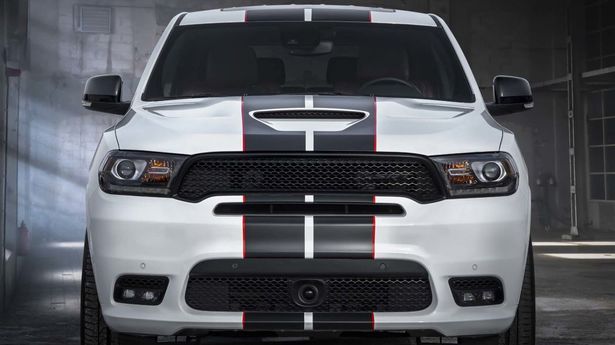 That's a scary sight to see in your rearview mirror while you're driving a Prius in the passing lane.

The new package is aimed towards folks who want more aesthetic menace to back up the huge power under the Durango SRT's hood. There's a lot of black and grey to add to the already hulking and muscular body. The Durango SRT 392 takes the existing Durango's body ands just about bigger everything including tires, intakes, suspension, etc. 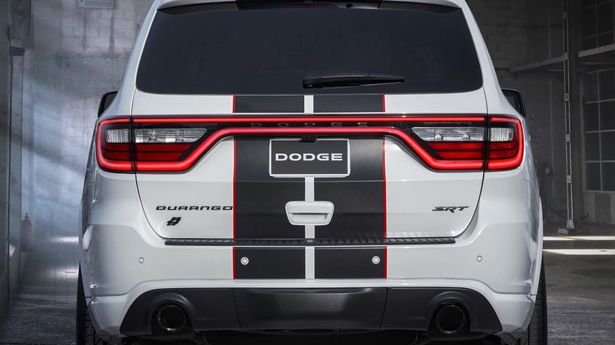 Here's the full list of what you get with the new SRT Black package as listed on the Fiat Chrysler America website: 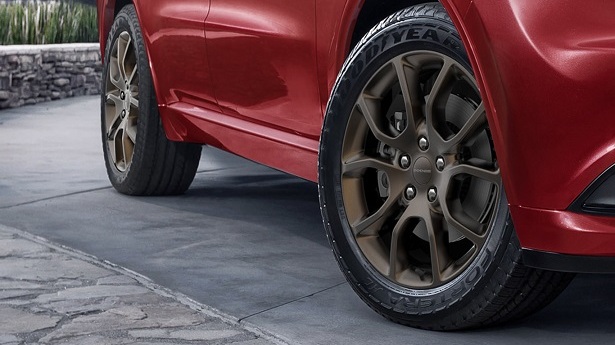 We think the Brass Monkey wheels are even better than the grey alloy versions.

The Redline stripe package you see in the photos adds matte black center body stripes with red accent pin-striping on the outer edges for an even racier effect. The addition isn't cheap at $1,295. You have to ask yourself if paying that much for some paint highlights are worth it. 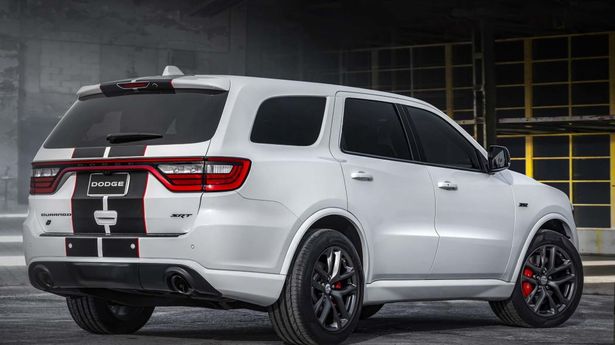 The aging Durango still looks great from every angle.

The SRT Black package is a bit deceiving since you can actually have it in one of ten colors including Billet Silver, DB Black, Destroyer Grey, F8 Green, Granite Crystal, Octane Red, Reactor Blue, Redline, White Knuckle and Vice White. Those are a lot of choices, and we're happy to see Dodge making them available to finicky customers. 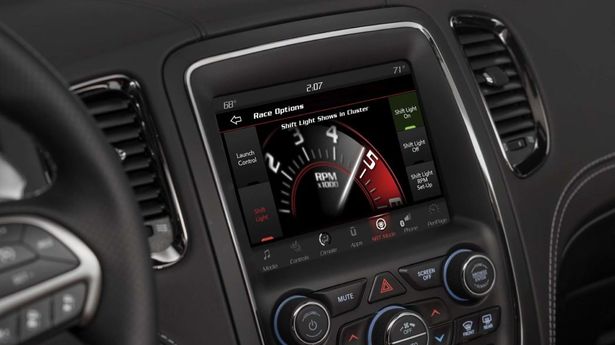 The SRT 392's interior doesn't really change much except for the Performance Pages menu that shows the stats (photo above). But the existing interior is still very good with Performance Laguna Leather seats (with heat/cooling in the front and heat in the 2nd row captain's chairs), real carbon fiber trim, silver accent stitching on the dash, an SRT flat-bottom steering wheel with paddle shifters, and suede headliner and A-pillars.

The Uconnect infotainment system also happens to be one of the best in the business, but you can't get the huge 12" system from the new Ram 1500. Wahh. Embossed SRT logos in the seats remind passengers they'll get their faces distorted from the power of the big beast. 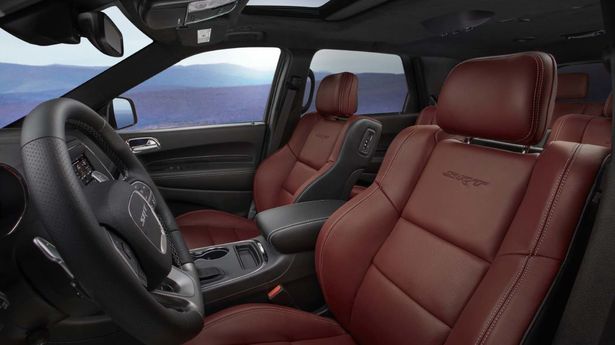 The interior might not be the latest and greatest in the business. The dash is overly thick, and there's still a lot of black plastic in the interior, but you'll be surprised by how much room there is inside. Everything is easy to use, and we appreciate the traditional shift knob (instead of rotary or push-button shifters that are taking over the industry). 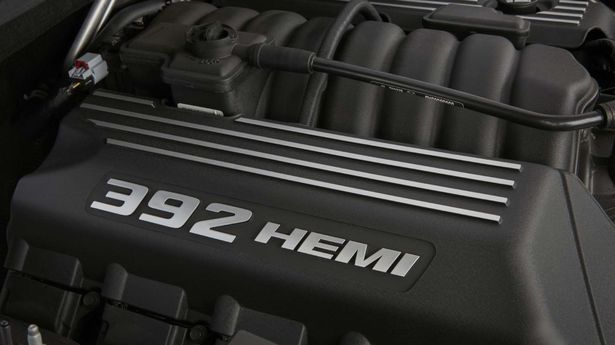 That sweet HEMI V8 is easily the best thing about the Durango SRT 392.

The mere fact that this seven-passenger monster can haul people, gear, and drive comfortably is remarkable, to say the least. And it's been on the market for about decade. The 0-60 time of 4.4 seconds, a quarter-mile sprint in 12.9 seconds, and the best-in-class towing capability of 8,700 pounds is even more mindblowing. Now, the Black package shows off a little more of what the Durango SRT is truly capable of.

The cost of the whole Black package is actually not that bad at $1,495, while that Redline striping still has us scratching our heads. Look for the new styling package at this year's Chicago Auto Show in February.

Interested in a Dodge Durango SRT? Check out our review below: 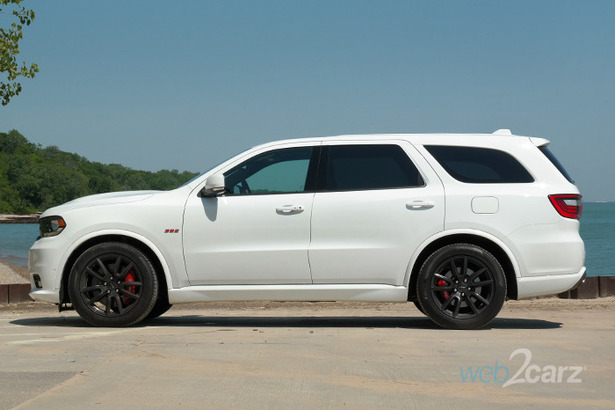