Everything We Know About the New Kia Seltos Compact Crossover

Bringing another knife to the fight 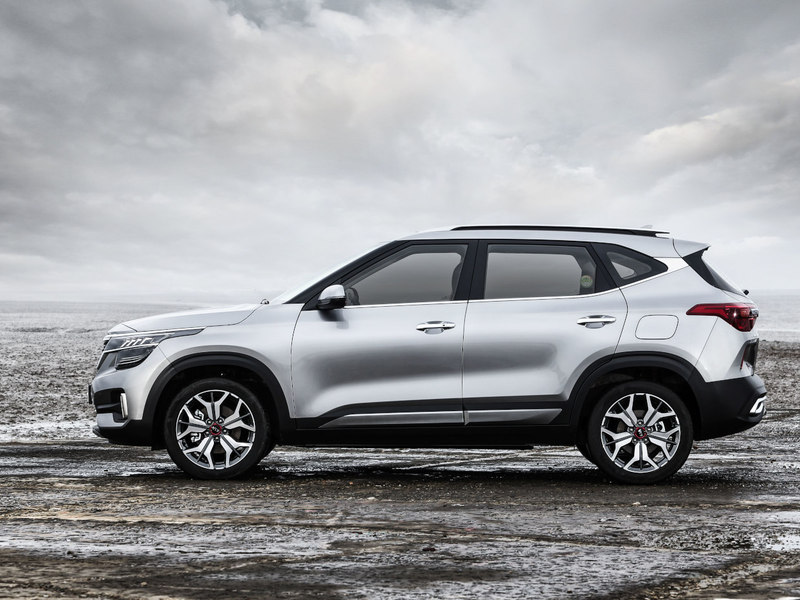 Kia is building more of its models with upscale styling.

For a long time, it seemed Kia only had a couple of crossovers. The Sportage and the Sorento were the main players, that's if you don't count the low-riding Kia Soul that really isn't a crossover since it doesn't offer all-wheel drive. Then came the efficient Niro family (gas, plug-in, and EV) and the awesome 3-row Telluride. Now the brand has a new member of their crossover family. Kia wants to expand by offering a compact that slots between the Soul and the Sorento, and it's known as the Seltos. Just don't ask us what the name means. Here's what we know about the new crossover.

It Gets Some Daring Styling Elements 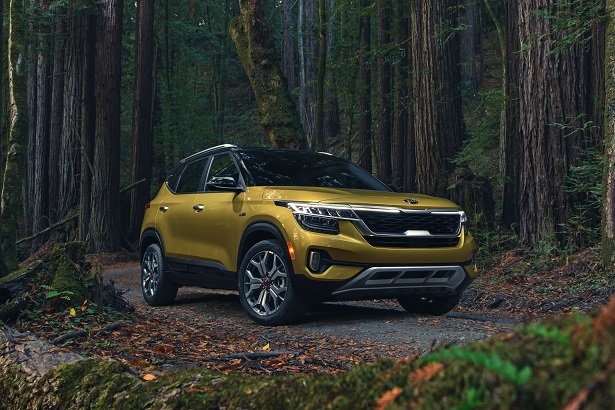 The Seltos already sells in South Korea, and it's making its way here.

The compact crossover market is hot, and it makes sense to add a fresh new member. The Seltos shares a platform with the Hyundai Kona, but its body is different with more attractive styling and a bit more sophistication. The tiger-nose grille is more sloped at the outer edges, and there's even a lower grille opening directly underneath, along with a prominent silver faux skid plate. The grille is flanked by complex LED headlights and key-shaped foglight housings. 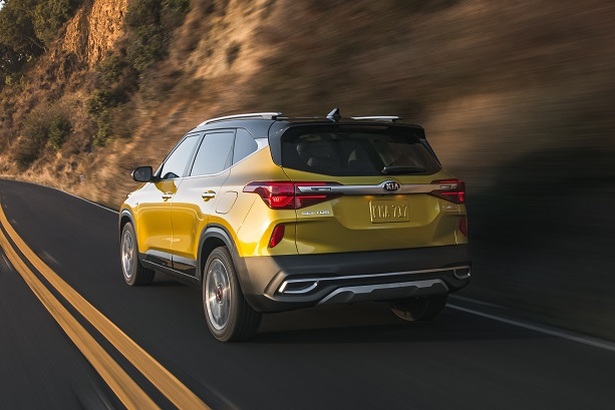 There are some nice creases to the hood and body, and the taillights have some artful shaping that wraps around the rear quarter panel, and they're connected by a brushed metallic silver bar. That connecting feature is also found in the exhaust ports with a faux skid plate just beneath.

The Seltos certainly looks better than the Sorento, which is showing its age. It has some of the same proportions as the attractive Telluride and looks more like a real crossover compared to the Soul. The Seltos also happens to have real crossover DNA, unlike the Soul, thanks to available all-wheel drive and an actual locking center differential for those times when you get in trouble. 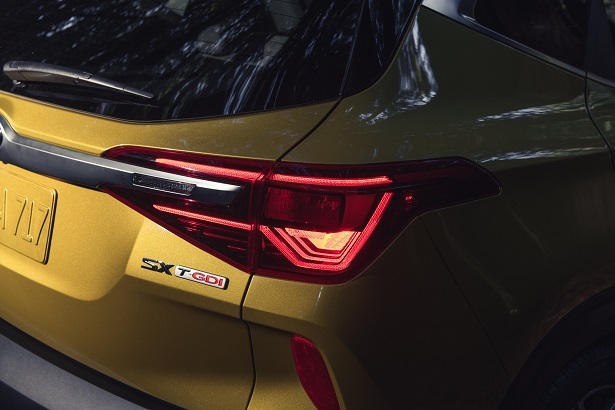 The handsome taillights have some nice visual depth with elements at the top and bottom.

The rest of the body is clean compared to the busy but attractive front and rear fascias. The black trim around the fenders and the rocker panels are a nice touch that matches the contrasting floating-style roof. The side mirrors appear to match the roof color, and the big alloy wheels (20"?) on the top trim SX T GDI shown here look great and fill the wheel wells nicely. 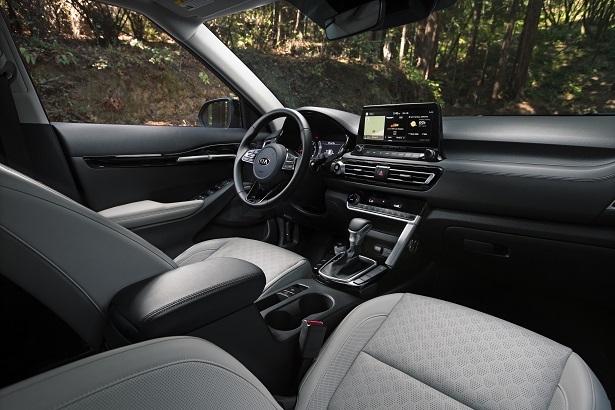 The cabin of the Seltos bears much of the new interior design language for Kia, and the result is very good. The layered dash is clean and unobtrusive, the infotainment screen sits atop the dash with a clean row of physical knobs and buttons just below. There's a dedicated shift knob (no pushbutton version, thank goodness), and there appears to be a grab bar for the passenger. 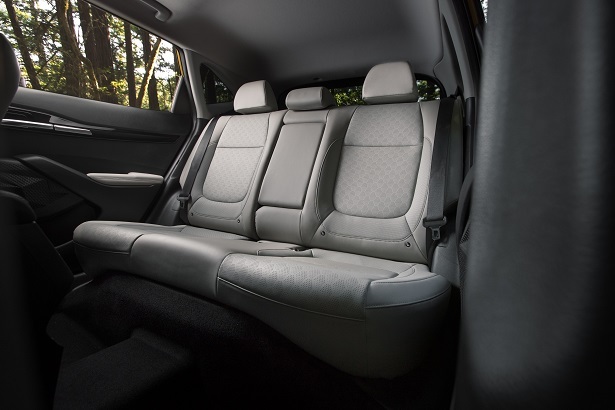 There should be ample space for front row occupants, and it looks like rear passengers won't suffer too much, at least in the outboard positions. Depending on trim, there are cloth, faux leather, and real leather seating, as well as heated/ventilated front seats and heated rear seats. We also expect the same steering wheel controls as other models, and they're some of the best in the business. 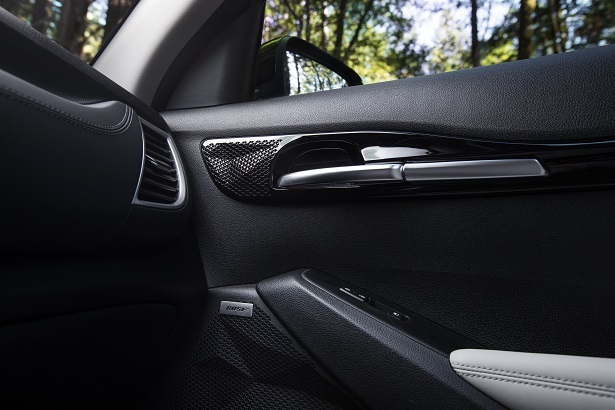 We especially like the styling of the door panel with its angular speaker housings.

It looks like the Seltos will get an 8-inch screen standard and a 10.2-inch capacitive touchscreen in higher trims. The easy and excellent UVO system will also get updated with better mapping and responsiveness, as well as Android Auto and Apple CarPlay. Higher trims will also benefit from an 8-inch multifunction digital gauge cluster and a head-up display. 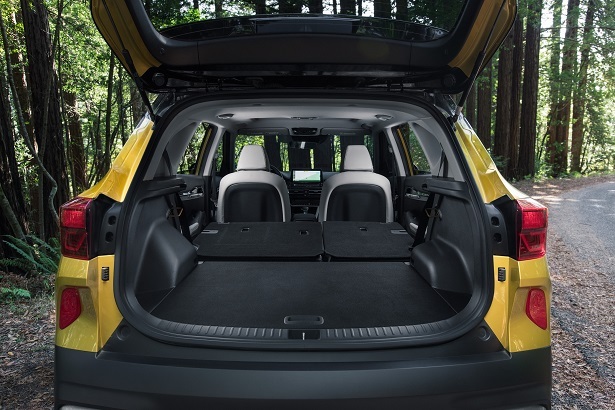 And just because it's not a premium crossover doesn't mean the Seltos won't get important safety tech. Optional equipment includes automatic emergency braking, pedestrian detection, rear cross-traffic alert, and even a fancy combo lane-keep assist system/adaptive cruise control that should allow hands-free driving for short distances. This should be a boon for commuters who want to show up to the office just a bit less tired than usual. 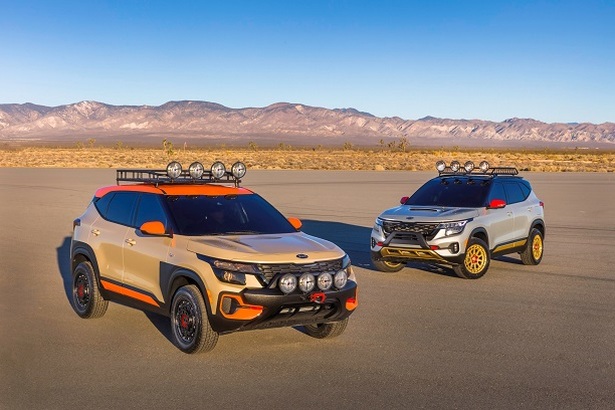 Kia even unveiled an X-Line duo of concept crossovers. Maybe some of the rugged bits will make it to production.

Last but not least, the Seltos should be powered by either a 2.0-liter four-cylinder and a turbocharged 1.6-liter four-cylinder. The non-turbo engine will have 146 horsepower, and the turbo mill will churn out 176 horses. Neither one will be a rocket, but the turbocharged version should be faster off the line. Both will be mated to a seven-speed automatic transmission.

We're not quite sure what pricing is or when they'll go on sale, but we expect it as a 2021 model for sale late next year with a base price of about $20,000. Even though the world needs another crossover like we need another hole in our heads, it should be a good draw for the brand and a good competitor for the vehicles like the Honda HR-V. Kia packs its vehicles with tons of great features and better styling inside and out than most of its segment competition.