Humans and autonomous tech work in tandem at Toyota 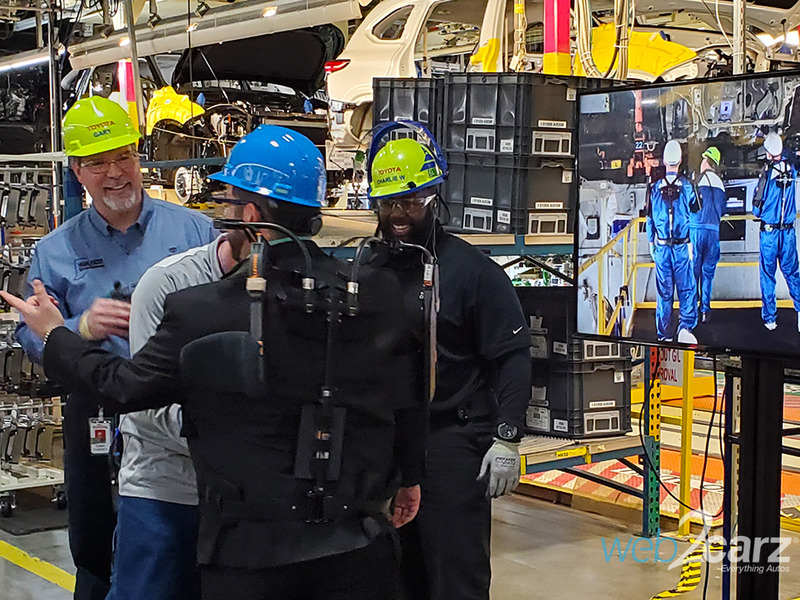 We often hear rumors that American manufacturing is all but dead. It may come as a surprise that U.S. manufacturing output has actually steadily increased over the last 30 years (only dipping during the recession). According to Forbes, manufacturing employment has been growing since 2010, but it is nowhere near the peak it hit in the 1970s. Toyota is playing an important role in revitalizing U.S. manufacturing by employing 179,000 people across its 10 U.S. plants and making multi-billion dollar investments in North American. We drove out to Toyota's factory in Princeton, Indiana for an inside look at the newly modernized plant that produces the Highlander, Sienna, and Sequoia. Our experience included a roundtable with Toyota executives, a plant tour, and an off-the-line ceremony for the new 2020 Toyota Highlander. 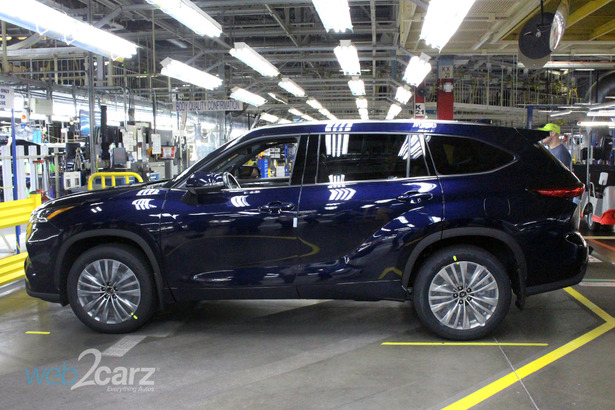 Meeting demand for the redesigned 2020 Highlander was a focus of the plant modernization project.

Toyota's Indiana plant has been providing manufacturing jobs for Gibson County since it broke ground in 1996. Today, it employs thousands of people and builds the Highlander SUV, Sequoia SUV, and Sienna minivan. With a footprint of 4.5 million square feet and over 7,000 employees, Toyota Indiana Plant president and Gibson County native, Leah Curry, jokes that her factory is the “second-largest city in Gibson County.”

During the executive roundtable, we learned that the Princeton, Indiana factory recently completed a $1.3 billion renovation project which began in 2017 in order to better align production according to TNGA (Toyota New Global Architecture) and meet the expectedly high demand for the all-new 2020 Toyota Highlander. The funds went towards retooling, new equipment, and technology to increase efficiency. The upgrades will enable the plant to accommodate a Highlander capacity increase of 40,000 units. 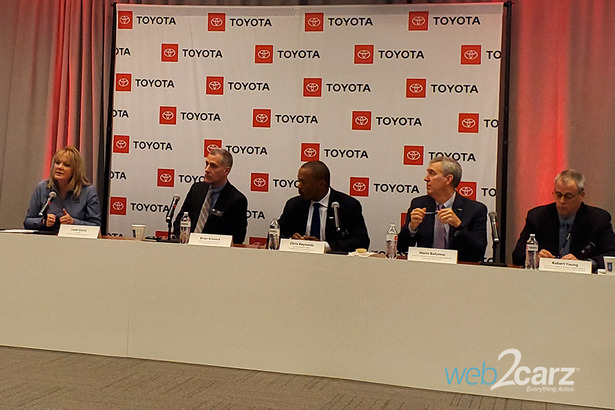 Residents of Princeton and surrounding towns in Gibson County benefitted from the addition of 550 new jobs created over the course of the project. If we zoom out from Indiana and take a look at Toyota's investments in North America as a whole, the numbers look even more impressive. Toyota's larger $13 billion investment plan in the U.S. is expected to be completed by 2021.

According to Christopher Reynolds, chief administration officer, manufacturing and corporate resources for TMNA, there is also a ripple effect with Toyota's "family sourcing"  geographically structured supplier strategy. “Part of Toyota’s tremendous success in North America is building vehicles where we sell them,” ....“Our $1.3 billion investment at TMMI is further proof that our Hoosier workforce is rededicated to producing safer, high-quality vehicles our customers love to drive" says Reynolds.

We learn how engine marriage is optimized for efficiency during the assembly process for the Sienna.

The goal for these large investments is to improve efficiency which includes aligning North American production by platforms and common architecture. As a result, the Indiana plant will stop producing the Sequoia to free up resources for Highlander demand. Sequoia production will move to Toyota's Texas plant where the Tundra is produced (Sequoia and Tundra share a platform as body-on-frame vehicles.)

The two common threads we found at each stop were the importance placed on team members' feedback for efficiency improvements and the marriage of human labor with robotic technology. According to Brian Krinock, senior vice president, Vehicle Plants, someone from the floor is working with the engineering group on a daily basis to innovate processes, reduce the burden, and improve efficiency. 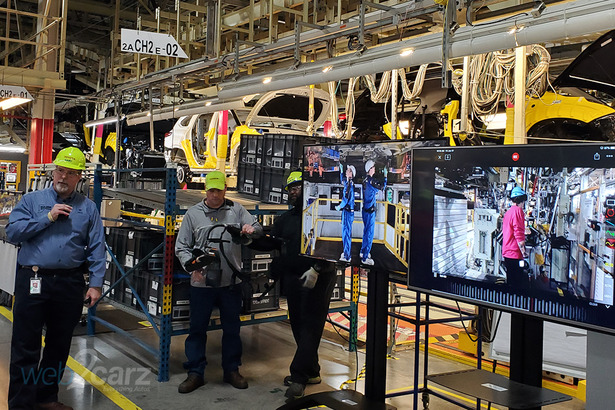 Automation often takes the blame for the dwindling number of manufacturing jobs in the U.S., but at Toyota's Indiana plant, we saw countless robots and humans working side-by-side. While fully autonomous cars are still years away from being available to the public, we spotted many AGVs (automatic guided vehicles) driving themselves around the plant, moving parts and reducing operating costs. Perhaps more impressive than the AGVs was Toyota's "Godzilla" robot. The appropriately named machine towers above the other equipment at 20 feet tall and lifts 1,500 pounds to move vehicle underbodies from one stage of production to the next. Smaller Cabot robots are used to perform repetitive actions like switching out parts to free up skilled talent for more advanced tasks. 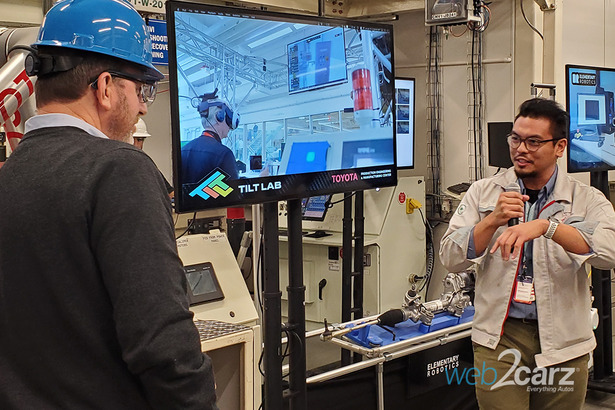 Technology also plays a key role in training team members and students in Toyota's manufacturing processes. From recording performance on the floor to find improvements, to advanced artificial intelligence that takes training completely off the line, Toyota's training processes are using the latest tech to create better output from its employees. Toyota's small team of engineers working at the Tilt Lab (a part of Toyota's Production Engineering and Manufacturing Center) is leading the charge to utilize the latest artificial intelligence technology to help with training. Virtual reality glasses, holographic reference, and Xrays are used for training instruction making complex manufacturing processes simpler. Inside Toyota's Assembly Skill Maintenance Training Center, trainees get hands-on assembly experience off the line with the assistance of AI. 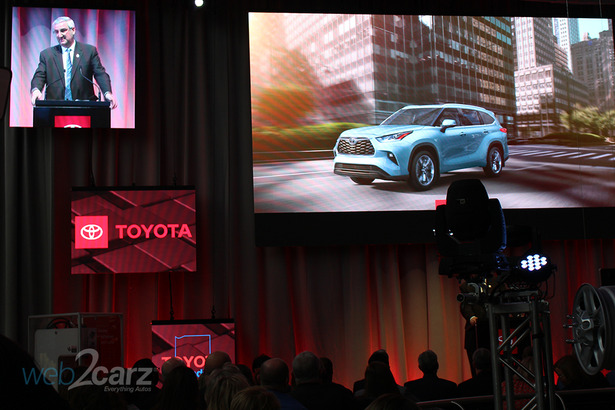 Governor, Eric Holcomb, speaks about Toyota's impact in Indiana at the Highlander ceremony.

Investing in the Future of American Manufacturing

Not only is Toyota providing hundreds of thousands of manufacturing jobs today, but they are also gearing up for the future by providing career training and opportunities in manufacturing for the next generation. In addition to Toyota's FAME (Federation for Advanced Manufacturing Education) program which consists of a two-year industrial degree known as the Advanced Manufacturing Technician program, the Indiana plant will invest $1 million in its new 4T program over the next four years. 4T prepares high school students from Gibson County high schools for careers in manufacturing through hands-on application. It shows students a clear career path in the field and gives them the skills to graduate fully prepared to start their careers whether at Toyota or elsewhere. 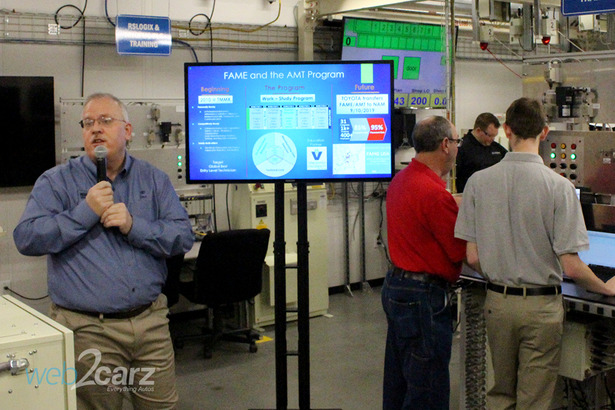 Part of the challenge in recruiting future team members is changing the public perception of manufacturing. Toyota wants to show students that today's plants are not the ones we think of from 30 years ago. Instead of the dark, dirty, and loud atmosphere many people picture, we found the Indiana plant to be clean, well-lit, and relatively quiet. Employee well-being appears to be a top priority with amenities including 3 gyms, an award-winning 24-hour child learning center, on-site nutritionists, pharmacy, and banks providing services like auto loans.

At the Highlander off-the-line ceremony, Indiana Governor, Eric Holcomb, shared his appreciation for the impact Toyota has made on his state. He also thanked the automaker for their dedication to providing future opportunities, "for more than 20 years, Toyota has been providing quality career opportunities and helping train Indiana's future workforce. I am so grateful that Toyota remains committed to Indiana, and am thankful for all they are doing to continue making Indiana the best place to live, work and play.” 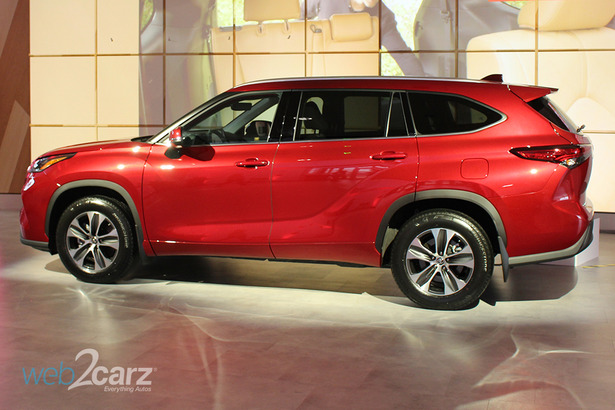 The Toyota Highlander tops the list for volume produced at Toyota's Indiana factory with 265,592 units produced in 2019. The plant modernization project and restructuring that moves the Sequoia to Texas will allow Toyota to meet the increased demand for the fourth generation Highlander. The completely redesigned 2020 Toyota Highlander is the first vehicle built on Toyota's new TNGA-K platform. With the use of high strength steel, the 7 or 8-seater SUV gets a stiffer structure which allows for suspension tuning, increasing the vehicle's agility. The more refined and quieter driving experience is an additional benefit of the new platform. A new exterior design adds chiseling and a hint of boldness to the family SUV styling.

The 2020 Highlander offers two available engines, a 295-horsepower 3.5-liter V6 or the new-generation Toyota Hybrid System which mates a 2.5-liter four-cylinder engine with two electric motors for 243 total system horsepower. The hybrid boasts a best-in-class MPG of up to 36 combined and the V6 gets an estimated 24 combined MPG. Both the gas and the hybrid models come in FWD or one of  Toyota's three AWD systems (2 available for the gas models and one that's hybrid-specific.) All models come standard with Toyota's Safety Sense 2.0 suite which includes Pre-Collision System with Pedestrian Detection, Lane Departure Alert with Steering Assist and Lane Tracing Assist. The pricing for the 2020 Highlander starts at $34,600.