This is the 2021 Lexus IS Sports Sedan

Great new looks and improved handling, but will it be enough? 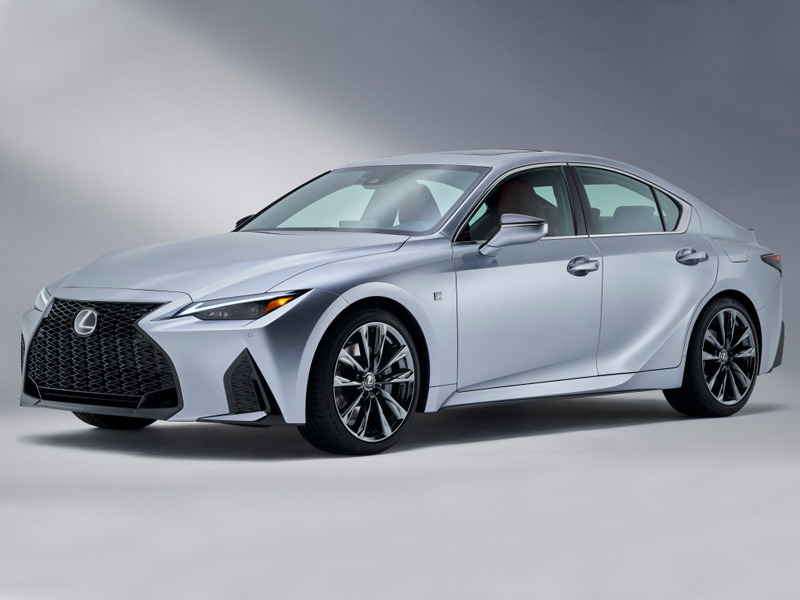 The best-looking Lexus IS to date. We'll see what it's like to drive.

Sports sedans might not be the hottest segment in terms of sales, but they certainly pluck our heartstrings. The new Lexus IS has just been revealed after it was announced last week that Toyota's luxury arm was going to put off the reveal indefinitely. A week wasn't long to wait, and it appears that it was more than worth it. While it's all-new, there's definitely some styling carried over to make the IS recognizable. 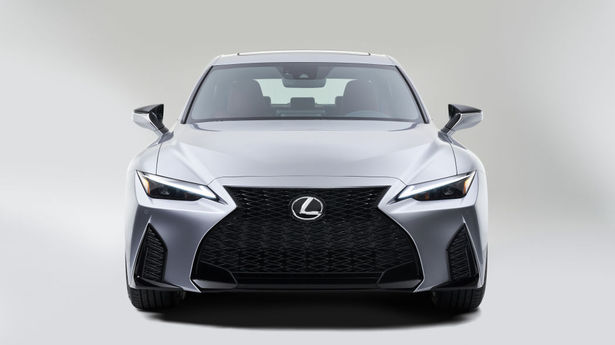 The front of the new IS 350 in F Sport trim shows a more cohesive and aggressive look.

The car you see here is the IS 350 F Sport, which means its styling is a tad more menacing than the base trim will be. The headlights and DRLs are now integrated and more angular. It's the biggest difference in the front. The front outer vents are larger, and now there's are three intakes below the grille that send air to the front brakes for improved cooling. Maybe Lexus thinks owners will take it to the track? 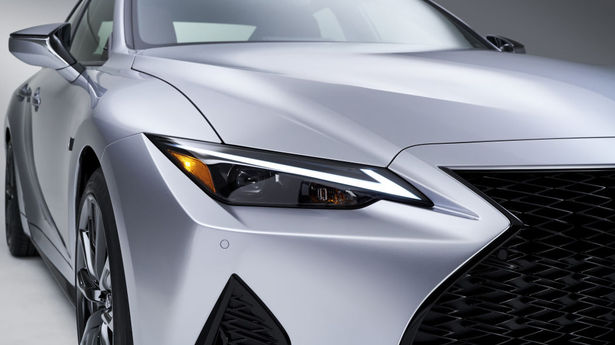 The daytime running light is now unified with the headlight instead of below it.

The profile shows a more pronounced crease that emanates from the bold rocker panel. On the old model, that uptick ascended mostly behind the rear wheel, but now it makes its way well into the trailing edge of the front door an most of the rear quarter panel. That styling cue from the outgoing model is now more noticeable and a welcomed sight that makes the IS stand out.

The body crease is moved from just below the side windows to just above the door handles, and it also has a visible line versus more of a curve from before. The nose is also flatter, resembling the RC coupe. From the side view, you can also see that the taillight wraps around with a sharper top edge, versus the old model's taillight's lower edge pointing towards the rear wheel. The result is a cleaner look from front to back because the top edge of the taillight lines up with the body crease. You can also see from the side view that the IS retains its overall shape that's very recognizable. 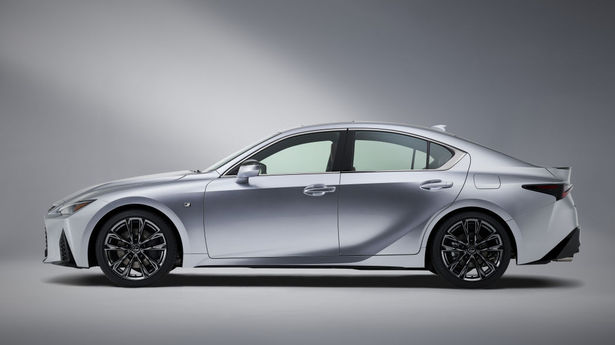 The rear of the IS shows off a full-width LED taillight that gives the car a more upscale look. Gone are the individual units, and the red lighting element that extends all the way across the back still has that L-shape at the outer edges. The rear valence is higher up on the body, and the twin round tailpipes are still there but this time in a more ovular shape versus circular. To top it off, there's a lip spoiler with raised outer edges versus a small ducktail like the old one. 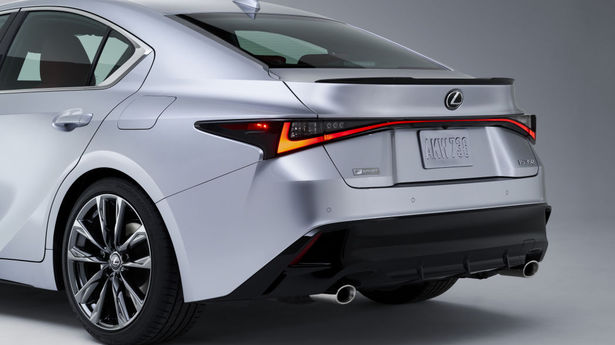 Additional F Sport niceties include wider rear tires for a staggered set-up, appropriate for a RWD sports sedan. There's also a cool air intake with a sound generator for a more aggressive note. F Sport trim also adds a special F Sport exhaust and a rear diffuser. The front and rear bumpers get a different look, and naturally there are F Sport badges all over the place.

While there's not as much change to the interior's look, it didn't need a lot. Lexus interiors are some of the best, especially in F Sport trim. The F Sport-specific seats (available in racy Circuit Red) look very much the same. The steering wheel has a chunkier hub, and it loses the silver trim in the F Sport (we're not sure what the base IS looks like). The infotainment screen now sits atop the dash versus set back inside it. The infotainment controls move behind the shifter instead of to the right side. 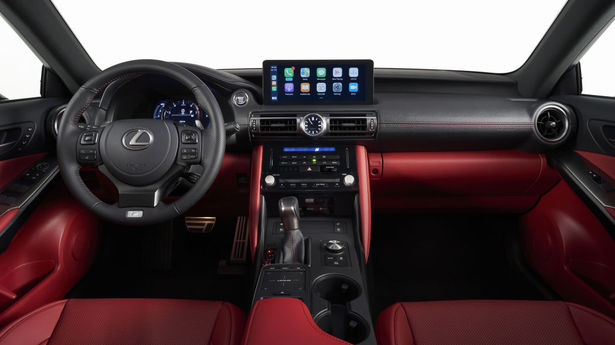 Those controls are now touchpad versus the old joystick. We're not huge fans of either, but at least the touchpad looks better and has marginally better precision. The standard touchscreen is 8 inches, but a bigger 10.3-inch screen comes with the optional Mark Levinson sound system. Apple CarPlay, Android Auto, and Amazon Alexa integration come standard on all models.

The premium Mark Levinson system now has 17 speakers (up from 15) and a more powerful amplifier. Driver assistance technology comes standard and includes Lexus’ adaptive cruise control and lane tracing assist that helps keep the car in the center of the lane. 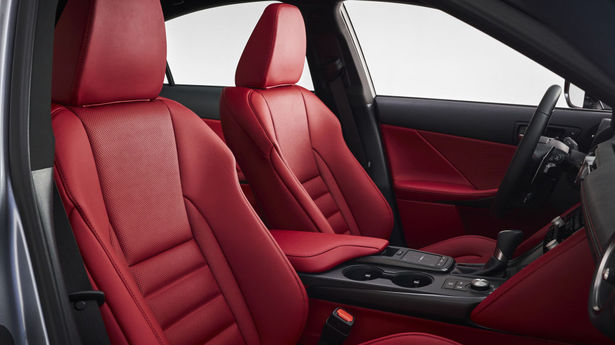 So, everyone (especially us) wants to know if the new Lexus IS will be any better to drive. Although we enjoyed our seat time in the 2020 model, there's no doubt if falls by the wayside when comparing it to the likes of BMW, Audi, Alfa Romeo, and Genesis. Well, Lexus has addressed it by adding structural rigidity and revising the suspension setup to be lighter, stiffer, and have improved damping for when road conditions are less than perfect. The result should be a more dynamic experience, and the sedan should feel more buttoned-down than before. 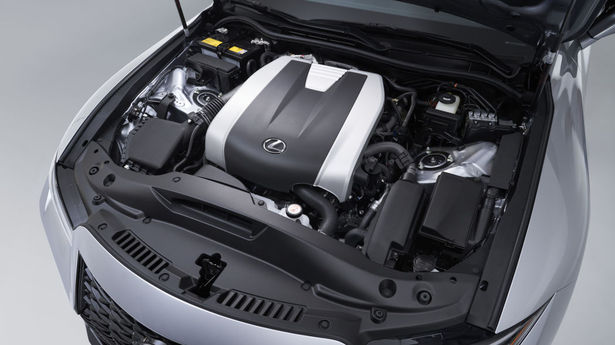 That surround might look different, but the engines are the same as before. Waahh. 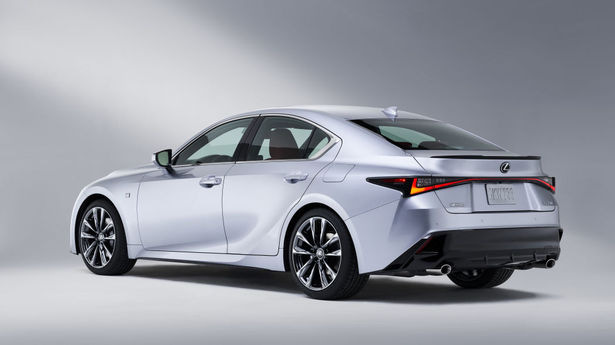 We're happy to see what Lexus has done with the styling, but we're a bit let down by the unchanged powertrains. We'll have to see how much the handling and steering have improved when we test drive it late this year. The new IS sedan should go on sale this fall at a price yet to be disclosed.

Find Local Discounts on the Lexus IS