The 2021 Hyundai Kona Gets Facelifted and Upgraded the Right Way

One of the brand's most important vehicles gets tweaked 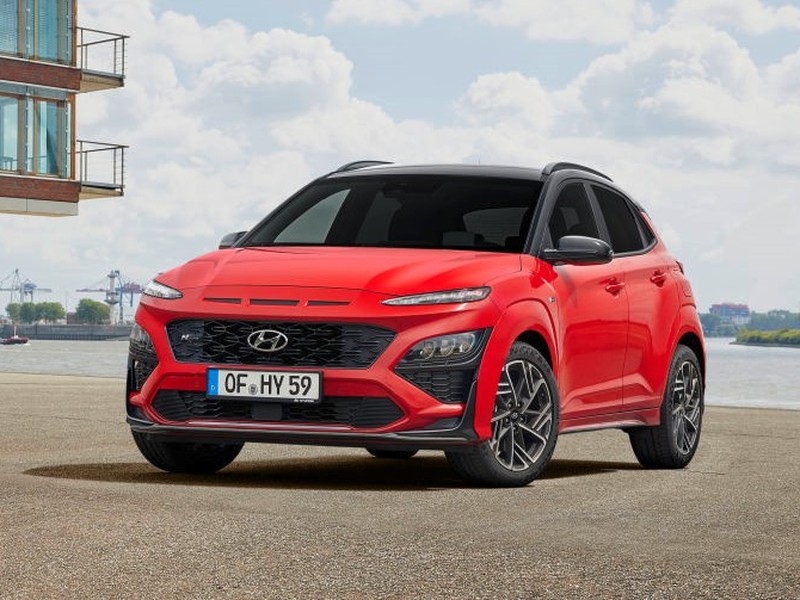 One of the best driving subcompact crossovers is the Hyundai Kona. Introduced in 2018, the Kona has sold in big numbers for the South Korean brand, and it's easy to see why. It's well-made, practical, fun, and perfect for urban environments. Plus, it can be outfitted with all-wheel drive, something neither the Nissan Kicks nor the Kia Soul even offer. Our only qualm was the overly busy styling that seemed a bit disjointed. For 2021, Hyundai has made the right changes inside and out. Here are photos of the refreshed Kona (L) and Kona N Line (R). 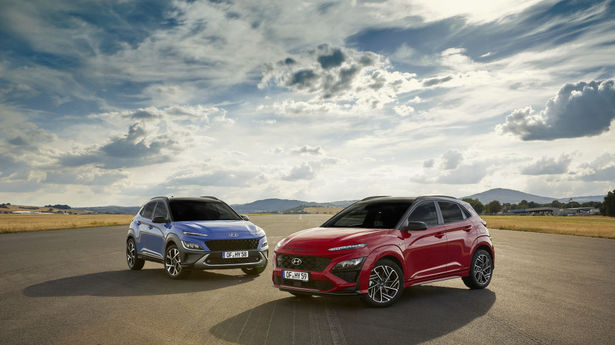 Regardless of color or trim, the refreshed Kona looks even better than before.

The changes aren't just cosmetic, which is also good news. There are improvements in technology, interior space, materials, and safety, and those changes apply to both the Hyundai Kona and the Kona N Line, which is sold overseas. These changes make the Kona even more appealing, even though the little crossover is already remarkably pleasing. Here's what we know.

The Exterior Gets Sharper

The first thing you'll notice is the dramatic changes to the front and rear fascias. It seems nothing has escaped the refresh in front or in back. The top-mounted Daytime Running Lights appear thinner with the LED elements moved to the top edge. On the Kona, the long opening just below the hoodline is gone. On the Kona N, there are now three apertures rather than a single opening. The grille is wider and shorter than before, and the low and high beams are now staggered horizontally in semi-ellipsoid shapes, as opposed to the outgoing model's multiple round lenses. 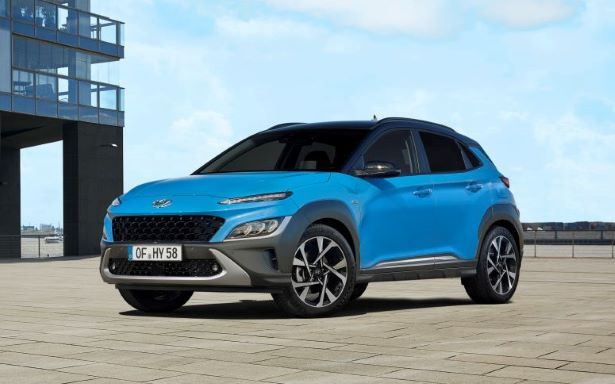 The grille gets a new mesh pattern on the Kona, and Kona N-Line's mesh looks similar to the one found on the Veloster N. The Kona also receives new lower side intakes and a faux skid plate that frames the lower grille. On the N Line, the intakes below the headlight cluster are larger with black mesh, and the front end gets a splitter and lower trim on the fascia that matches the body, unlike the grey trim on the Kona. The fog lights are now round instead of the semi-teardrop on the outgoing vehicle. 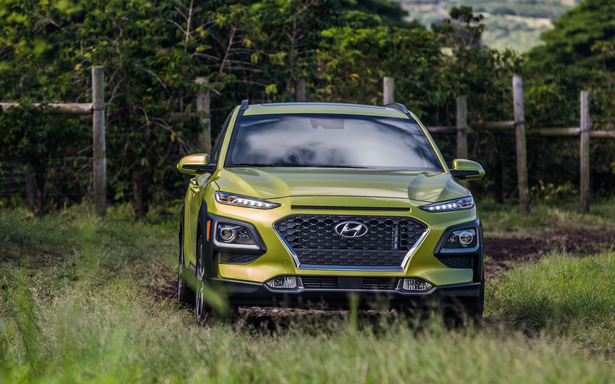 While the Kona gets grey rocker panels, the N keeps its body color for a less rugged, sportier look, along with larger 18-inch wheels. You can also upgrade wheel sizes on the Kona from the standard 16-inchesrs. There are almost as many changes to the rear fascia as the front fascia that keep the look consistent. Taillights keep the same shape but display a different light signature, especially along the top edge of the lenses. 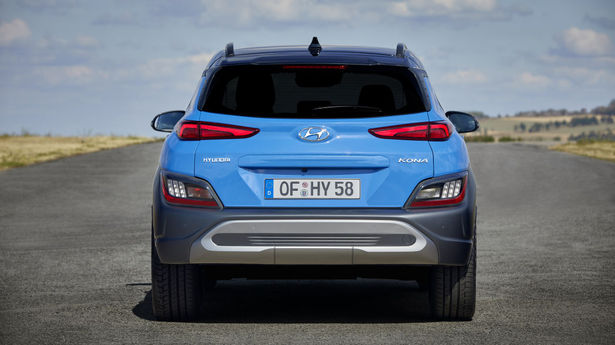 Clustered LED elements in the backup lights are more pronounced and moved to the outboard edges, and there's no longer the grey plastic separator. The lower bumper is all grey now, and it's more integrated with the rear wheel well trim. There's a lighter grey faux skid plate in back that's similar to the one in the front, and the result of all this gives the Kona a wider look from the back. 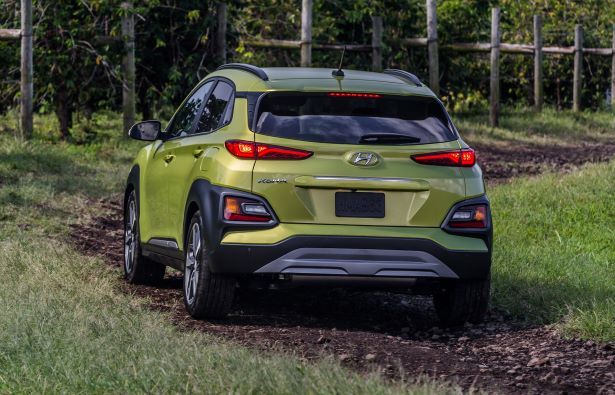 The new Kona is actually a tad longer with the addition of 1.6 inches. You might not notice from the profile view, but the change also translates to the interior. Rear seat occupants get a little more legroom, as a result. The changes to the exterior of the Kona aren't significant enough to qualify as a redesign, but the overall refresh gives it a more cohesive and less busy look. We're big fans. 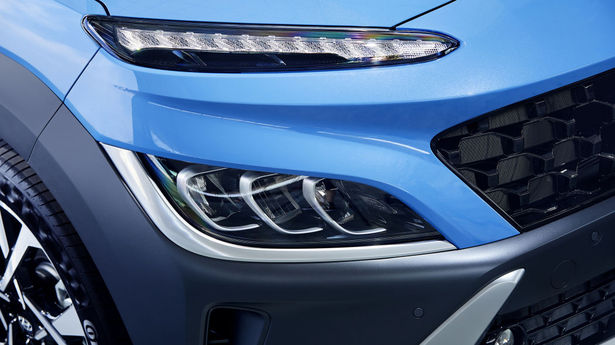 The Kona's headlight cluster looks less convoluted now that they're all lined up.

The Interior Gets Upgraded

We're happy to see the refreshed Kona gets treated to better digs, not that there was really anything wrong with the easy-to-use cabin of the 2020 model. The overall design is the same, but upgrades like an 8-inch display audio screen (up from 7 inches), as well as a new optional 10.25-inch screen ramp up the tech quotient significantly. You'll also notice infotainment controls no longer flank the screen on both sides but instead show up in a single line below the screen, making them easier to operate while driving. 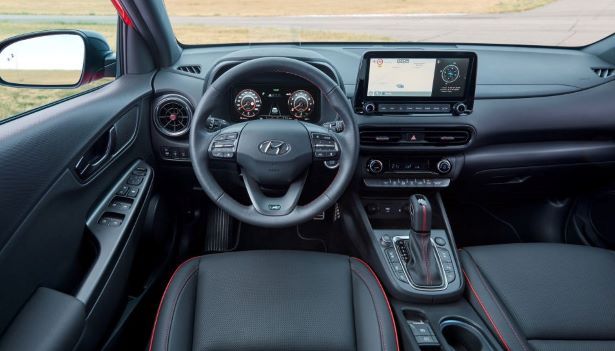 There's also standard ambient lighting around the cupholders in the center console and around the audio speaker, as well as in the footwells. The manual parking brake has been replaced by an electronic one that allows for more room between the seats. Speaking of seats, the fabric has been upgraded to black houndstooth and black and gray embossing. Leather seating now includes two-tone beige and khaki for a more sophisticated look. The Kona N Line receives only black in cloth, faux suede, or leather with contrasting red piping and stitching for that sporty appearance (see photo above). 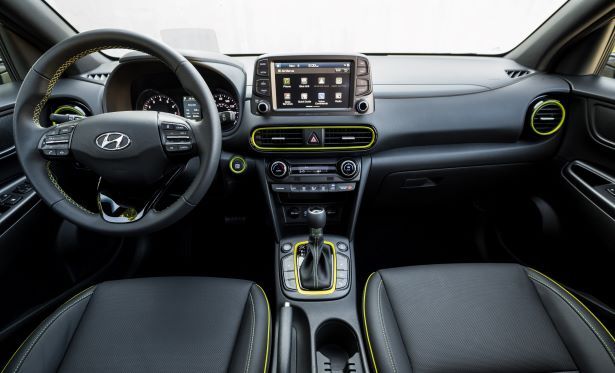 There's more tech, too: updated Bluelink with last-mile navigation to get you to the door, as well as live parking information, split-screen capability on the 10.25-inch screen, user profiles, additional voice commands, and something we truly appreciate, wireless Android Auto and Apple CarPlay, so there's no need for wires to make it happen. Adaptive cruise control is now stop-and-go, and there's a safe exit warning, so you don't open the doors if a car is approaching from the rear side, and a rear seat reminder so kids, pets, and cargo don't get left behind. 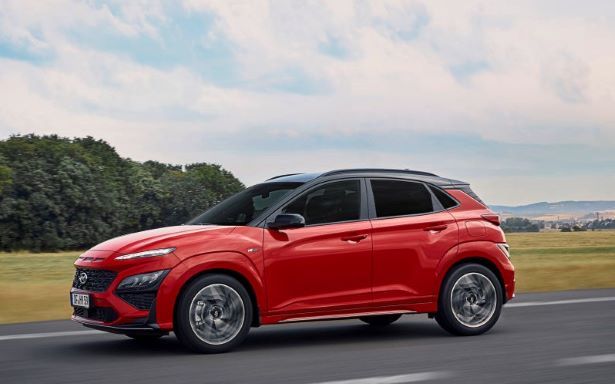 The N Line looks almost racy with the new changes, as well as sweet 18-inch wheels.

Finally, in terms of power, the top-tier powertrain (a 1.6-liter four-cylinder) gets 20 more horses to the tune of 195 horsepower, and it's mated to a seven-speed dual-clutch gearbox for front-wheel- or all-wheel drive. The base engine, a 147-horsepower 2.0-liter four-cylinder engine, gets paired with a six-speed automatic transmission or the DCT. It can now be paired with 48-volt mild-hybrid power. The Kona also gets retuned steering and suspension that should improve the already excellent response, precision, and ride quality. The N Line is tuned to be sportier than the regular Kona.

All in all, it's a win-win for Kona shoppers since the existing Kona is already damned good and one of our favorite diminutive crossovers. The refreshed Konas go on sale sometime in the first half of next year, and we should get the Kona Hybrid shortly after.

The Hyundai Kona is one of our favorite compact crossovers. Read our full review below: 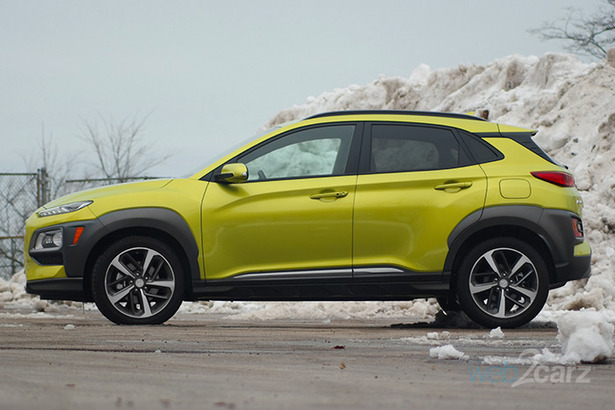