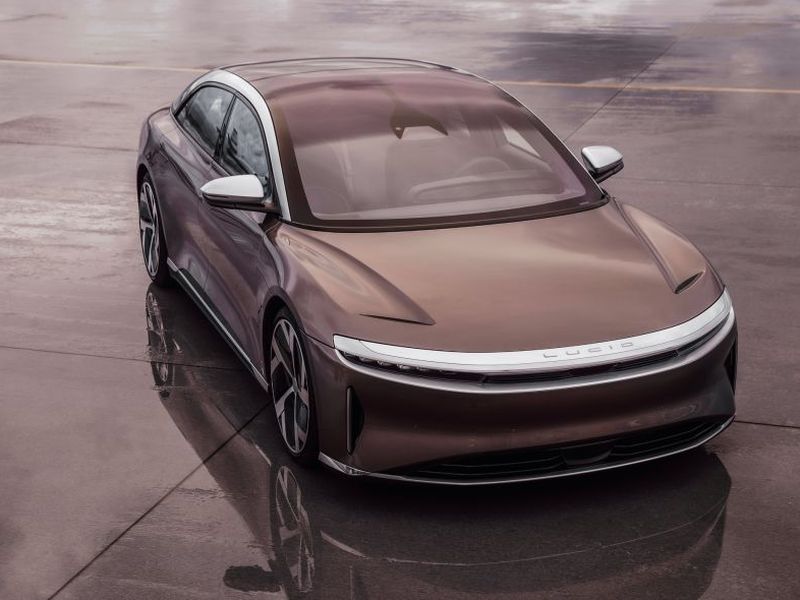 It looks like the Air has what it takes to unseat the Model S.

The world has been waiting for someone to give Elon Musk a run for his money. The EV juggernaut hasn't had any serious competition against the likes of their Model 3 sedan and Model Y crossover in, well, forever. But the game just got serious now that the long-awaited Lucid Air has been unveiled in production form. 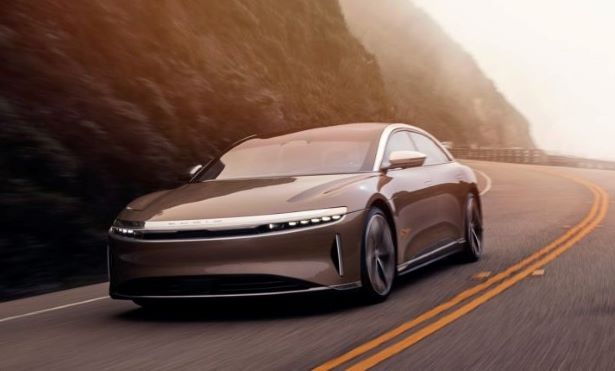 It looks every bit as good as renderings and prototypes, with a less polarizing look than Tesla's cash cows. But it's more than just a pretty face. Lucid states that the Air will have upwards of 1,080 horsepower and a range of up to 517 miles. We bet Elon's pissed off already. Let's get to know the Air a little bit better, shall we?

The Clean Design is Purposeful 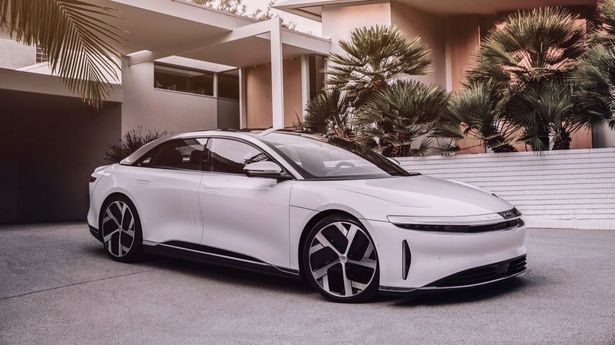 The Air's name isn't some random choice. Lucid CEO Peter Rawlinson, who was an engineer at Jaguar, Lotus, and Tesla before he started Lucid Motors. His goal wasn't to just build an EV to beat Tesla but to build one that was spacious, beautiful, and airy in its atmosphere. The design of the exterior points to that with its wide, minimalist fascia, the expansive greenhouse, and the clean body design.

It's very close to the renderings (above) and the prototype photos (below) in terms of shape and overall ethos. It also doesn't copy any automaker but certainly looks a bit closer to the Porsche Taycan EV than it does the Tesla Model S with whom it will directly compete. It's great to see that the car hasn't changed all that much from the original plan. 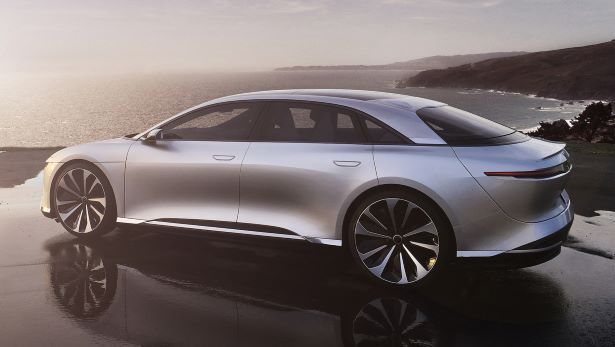 The Lucid Air in 2019 photos. Not much has changed, and that's very promising.

In fact, it seems like only the exterior side mirrors and the wheels are different from the prototype. You'd really have to take a close look at the photos of both vehicles in order to be able to tell the difference.  This equates to good planning and engineering on the part of Lucid Motors. So many concepts and prototypes change drastically due to costs, as well as due to impracticality. 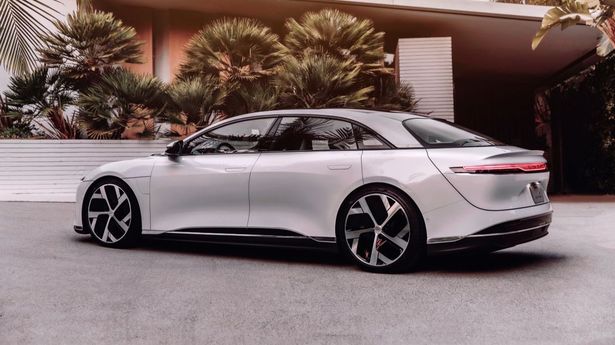 The Air has kept virtually everything that the initial photographs show from last year. The shape is identical, and that equates to the most aerodynamic body out there with a scant 0.21 drag coefficient (the Telsa Model S is less so at 0.24). The production version of the Air keeps the simple fascia, large hood, bisected front quarter panel, flush door handles, notched rocker panels, and the long greenhouse with its beautifully cascading C-pillar. 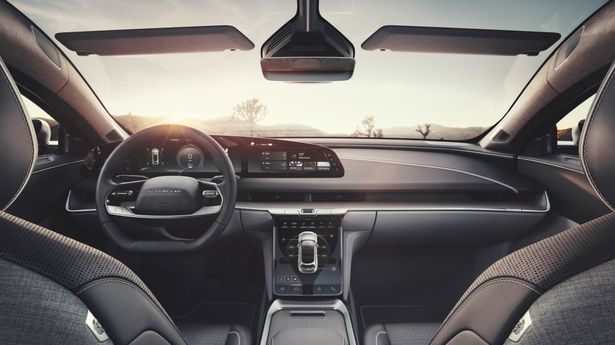 The interior of the Air is even more significant than its exterior design. Not only is it packed with technology, but the Air also has cavernous space for a sedan. Lucid Motors says the Air was designed from the inside out with the goal of maximizing space for occupants and creating "an unrivaled sensory experience". We don't have legroom/headroom/shoulder room dimensions yet, but from photos, it seems plenty big inside. 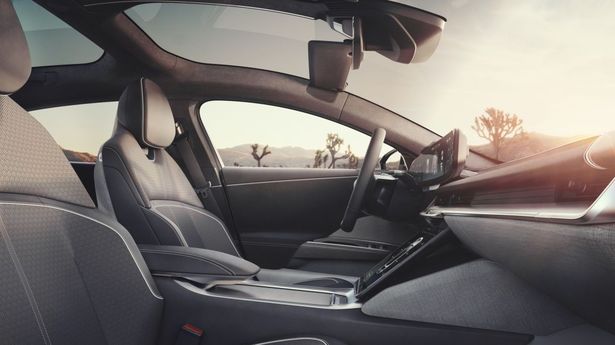 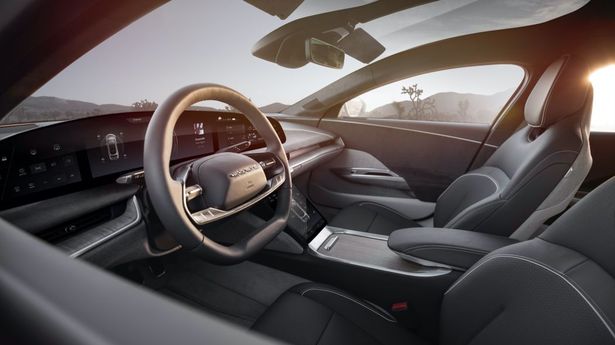 We have to mention the huge 34-inch, curved glass 5K display that spans almost the full width of the dashboard. It's broken up in to separate sections for driver and passenger, as well as based on functionality. The center stack also gets its own retractable touchscreen, but there are still some nice milled physical controls, especially on the steering wheel, so not all functions are isolated to the screens. 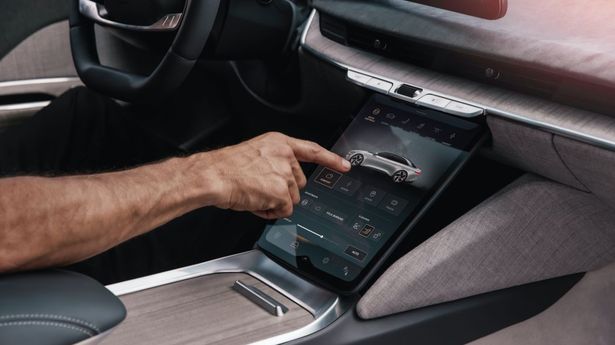 The biggest change to the interior looks like the rear seats. The concept vehicle had two big outboard seats with a center console in between. The production version has more of a traditional bench seat like most sedans. While they look nice, they're not nearly as posh as the executive jet seats from the concept. They might be optional equipment on higher trims with the ability to recline 55 degrees for optimal comfort. 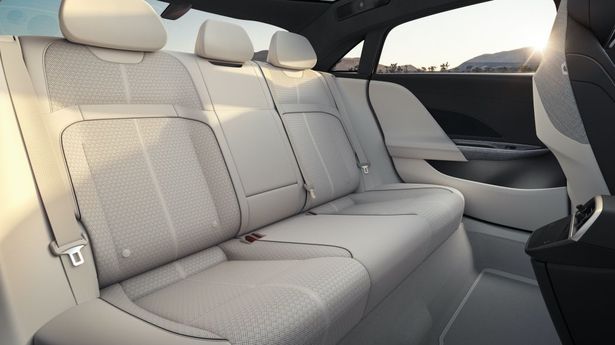 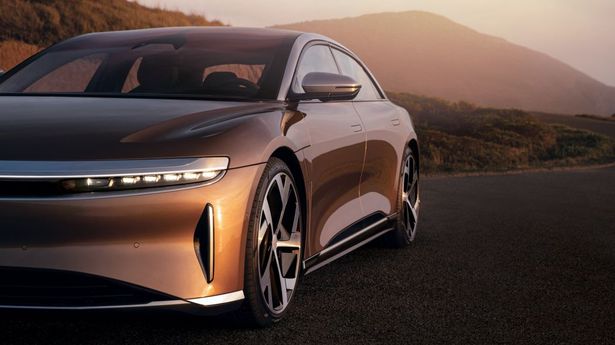 It's not just the interior and exterior design that stick a finger in Elon Musk's eye, it's the range, power, and performance that rise to the top. Each of the Air's drive units can pump out up to 670 horsepower, and the output of the top-tier Lucid Air Dream model is a truly stratosphere 1,080 hp. But that's not the limit. Apparently, the Air's subframe module can handle a third motor, which would send future performance trims even higher. 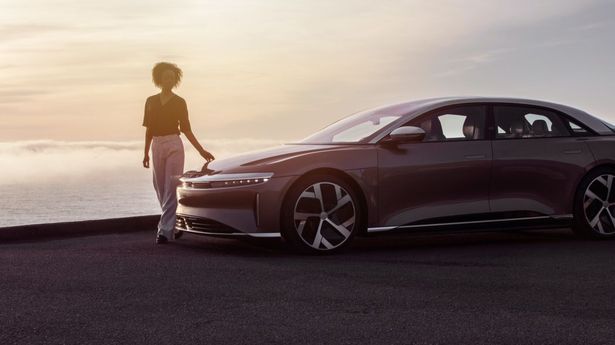 Performance for all trims will be impressive, but the 1,080-horsepower model should hurtle to 60 mph from a standstill in under 2.5 seconds and roast the quarter-mile in a mere 9.9 seconds. This should put the Tesla Model S Plaid to shame and make the Air the quickest production EV. Even the slowest model should do 0-60 in under four seconds. It's also a range monster with up to 517 miles on a single charge. The modular 113-kWh battery pack actually consists of multiple segments that can be reduced on lower trims.

In terms of trims, range, power, price, and release dates, here's the breakdown.

If the company can meet its production target dates, as well as its range and power claims, along with solid initial quality, the Air will be a huge hit. It would certainly benefit the brand to build a smaller, cheaper EV (perhaps a crossover to compete with the Tesla Model Y) since that's where the money is. Americans are still looking for a $40K EV that's efficient, powerful, and sexy, which is why Tesla is doing so well (okay, so the Model S is the only sexy vehicle in the Telsa lineup until the new Roadster shows up). We can't wait to see the Air in the flesh. It's more proof that Tesla can't rest on its laurels.