The 2021 Honda Ridgeline Gets Refreshed and Finally Looks Trucky

The grille we deserve 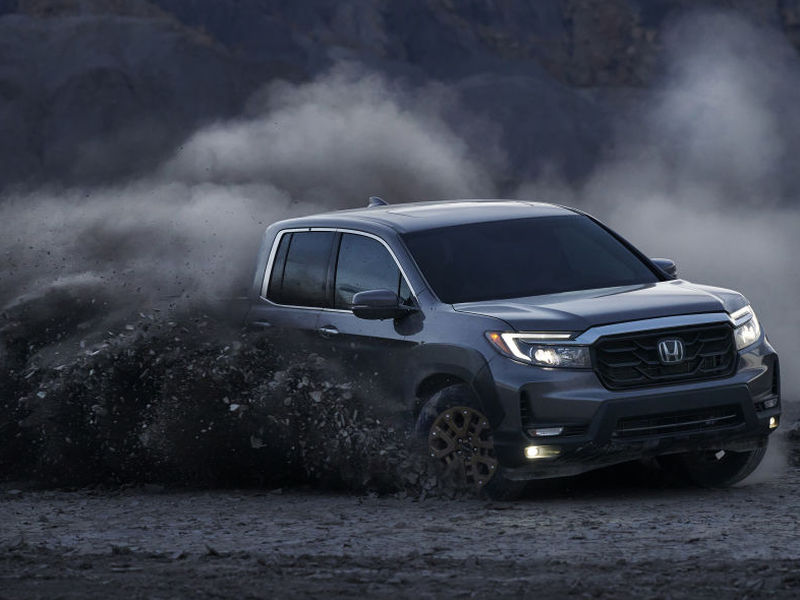 The Ridgeline finds its rightful place in the pickup truck segment.

The Honda Ridgeline has been a big success for the Japanese brand. Although the Ridgeline has never been a body-on-frame pickup truck in its two generations, that hasn't stopped buyers from flocking to it for its easy driving manners, roomy interior, and its practical 5.30-foot bed. But the second-gen Ridgeline's front end looked more like the three-row Pilot's or the Odyssey minivan's fascia. That issue has finally been addressed in the Ridgeline's mid-cycle refresh, and it's about damned time. 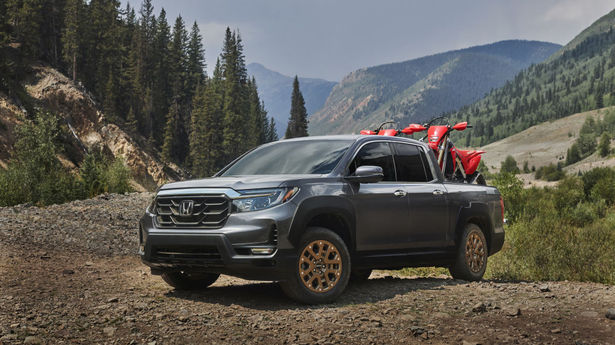 The Ridgeline gets Honda's boldest grille to date.

The change makes total sense because pickup truck owners don't typically want their vehicles to look, well, soft. It wasn't just the fact that the fascia was a bit on the delicate side but also because it was a bit boring to look at. The squared-off bed of a pickup truck deserves some similarities echoed in the front, and blocker looks better. That's part of the reason behind the first-gen Ridgeline's success. It didn't communicate the unibody structure as much as the current one does. 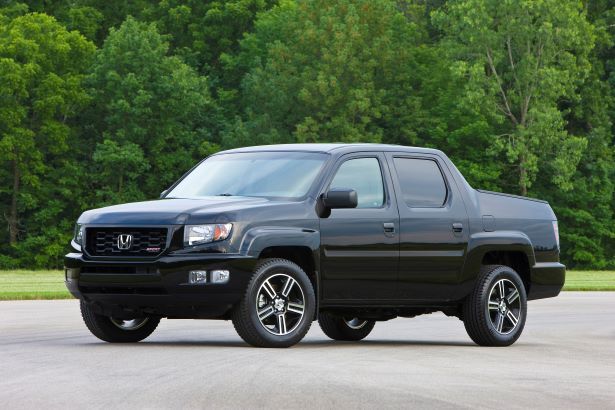 The first-gen Ridgeline was distinct and very truck-like at the front end.

We do find it odd that the second-gen Ridgeline departed so much from the original formula. The first-generation Ridgeline was distinct but still very truck-like in its appearance with a blocky and upright front fascia, big fender wells, and a very interesting bed with sloped sides that were often criticized. It sold decently, but the second-generation truck went more mainstream in search of increased market share. What it lost was some of its uniqueness. At least Honda now recognizes that a truck should look like a truck. 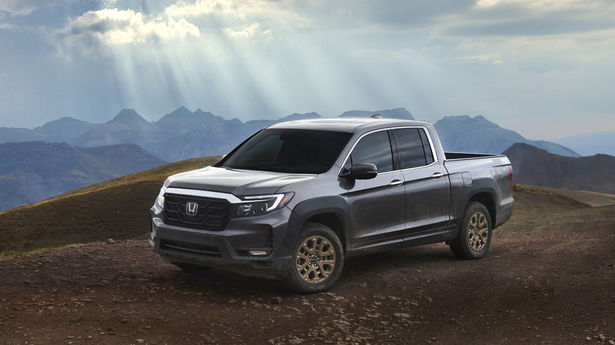 The 2021 Ridgeline's refresh is a significant one. The front end from the A-pillars forward is all new. The hood angle isn't as steep, and it leads to a more upright front fascia with a boldly patterned grille. It's also a larger grille than the previous version. The winged chrome strip detail above the headlights and the top frame of the grille is still there but moved higher on the fascia. We don't like the chrome much, but it helps tie the previous version to the new one. There's also a new, more substantial bumper, a front skid plate, and redesigned headlights. 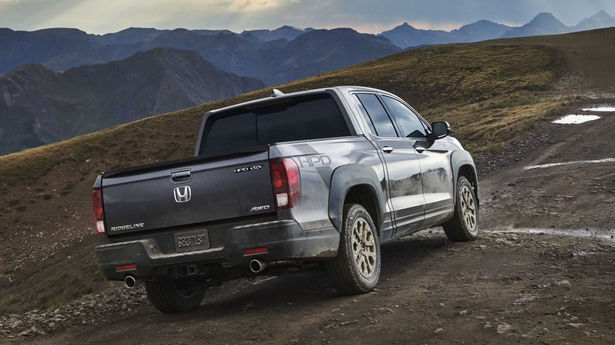 The back end is much the same, with the exception of a reshaped bumper for the new twin round exhaust pipes. The taillights and the tailgate continue largely unchanged. Track width has been increased by 20mm, and there are also new 18" wheels shod with more rugged-looking tires (chunkier sidewalls). All of this adds to a stronger truck-like presence that should attract even more buyers to the Ridgeline. 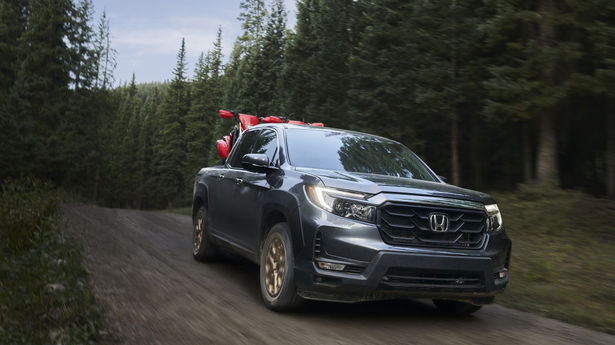 The truck in the media photos here is a specially-trimmed version known as the HPD (Honda Performance Development Package with its different grille treatment, cool bronze-colored wheels, black fenders, and special HPD graphics on the bed. We're not sure what the base truck will look like, exactly, but expect things to be toned down a little bit. The shape and the fascia will be the same, but some of the aesthetic details will be different from the HPD. 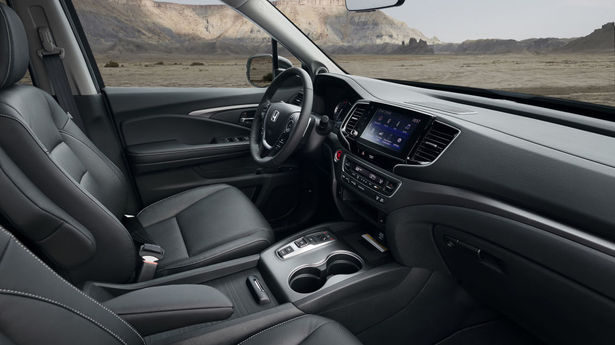 The interior doesn't receive as many updates as the radically changed front end. The 8" infotainment screen in the Ridgeline has new graphics and the addition of a real volume knob (so revolutionary!). The base "Sport" trim also gets a new cloth seat insert, while the Sport, RTL, and RTL-E trims get new accents on the dashboard, steering wheel, and the center console. Otherwise, the Ridgeline's cabin is much the same. 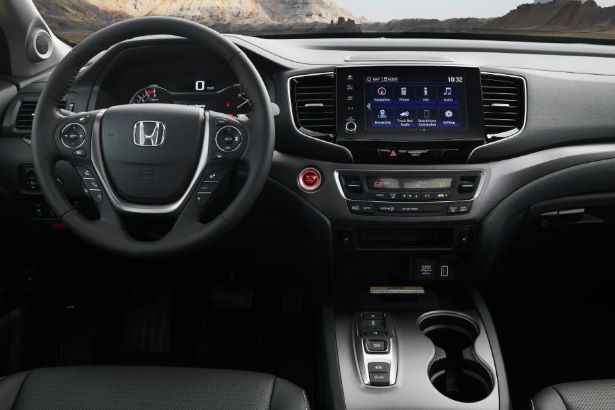 Power for the Ridgeline remains the same from its 3.5-liter V6 that produces 280 horsepower and 262 lb-ft of torque. The nine-speed automatic transmission continues shifting duties, and you can still opt for the torque-vectoring all-wheel drive system. In terms of towing capability, the Ridgeline can still tow 5,000 pounds and carry 1,580 pounds of payload, so it's very practical for owners who don't need to pull massive amounts of weight.

The 2021 Ridgeline with the more truck-like refresh will go on sale in early 2021. No pricing details have been provided, but we expect just a small increase in price if any.