The sporty coupe grows up 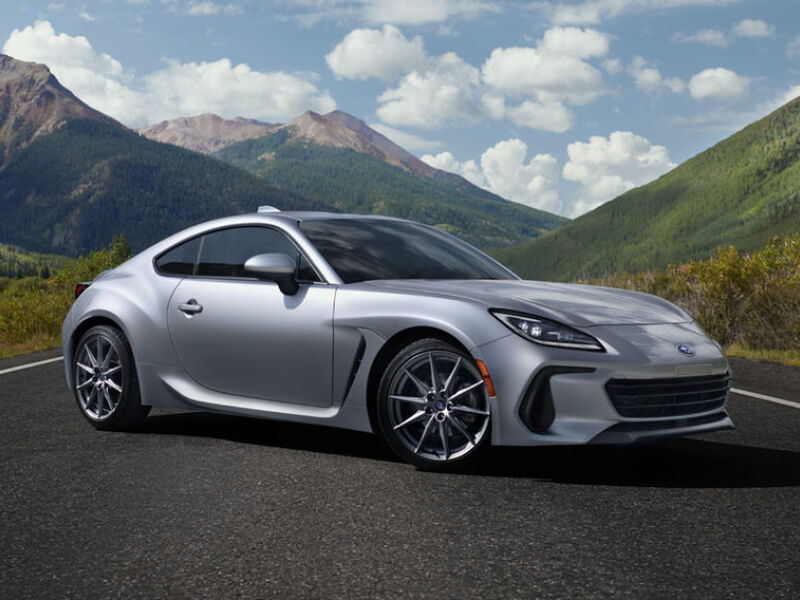 The veil has been pulled back, and we really like what we see.

The new, second-generation Subaru BRZ is one of the most anticipated cars for the 2022 model year (at least to enthusiasts like us), and after numerous teasers, it's finally been unveiled. While it exhibits the same overall shape as the first-gen BRZ, it's clear the affordable, rear-wheel drive sports car has matured. Some in the media were hoping for turbocharging to give the BRZ more power, but it seems the powers that be at Subaru and Toyota (its 86 cousin should be pretty similar) deemed natural aspiration as the way to go. The good news is, there's more power on tap than before, and it still gets a stick shift. 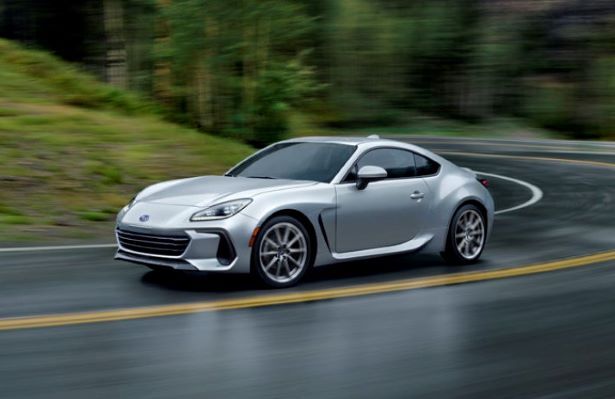 Subaru unveiled the 2022 BRZ earlier today on the web, and it shows a more grown-up look that actually makes it look pricier than its predecessor. The front end borrows some Porsche Panamera/Cayman elements, and from the A-pillar back, it really does resemble a Lexus RC F, especially the front fender vent, rocker panels, and the haunces and ducktail trunk spoiler. Even the roofline and the rear side window uptick copy the RC F.

The engine isn't turbocharged, but it does offer up 228-horsepower to the rear wheels. Almost as important is the fact that the BRZ's weight is under 2,900 pounds. The power is up by a not insignificant 23 hp and 28 lb-ft of torque thanks to its new 2.4-liter (up 0.4 liters of displacement compared to the 2020 model). The power-to-weight ratio should be better, which means we expect better performance. 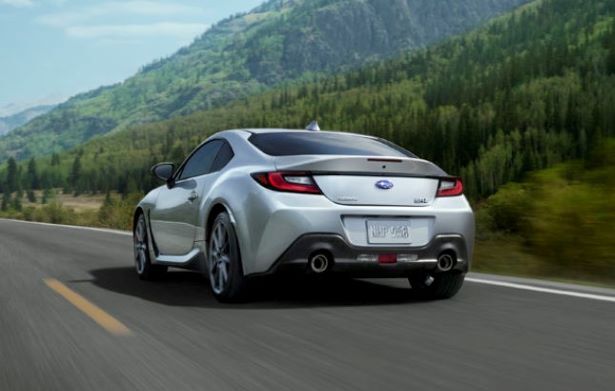 The BRZ looks meatier from the back thanks to Lexus RC F-like styling and taillights from a 2016 Honda Civic Coupe.

The new BRZ follows pretty much the same formula as the first-generation model. For ideal handling and driver control, there's a limited-slip rear differential and a standard six-speed manual (thank goodness they didn't go automatic-only). You can (but totally shouldn't) opt for a six-speed automatic with wheel-mounted paddles with rev-matching. The manual transmission is part of what makes the BRZ an enthusiast-focused car.

The weight for the new BRZ is 2,815 pounds, which is up only 17 pounds from the 2,798 in the 2020 model. For those of you who poo-pooh the lack of turbocharging, take note that if the BRZ matched or surpassed 255 horses, the Toyota 86 (which is soon to follow) would use the same powertrain setup and cannibalize sales from the turbo four Supra. The performance bump should make a big difference. That's tantamount to the power increase for the 2019 Mazda Miata (from 155 up to 181). That power increase was noticeable, as should this one. 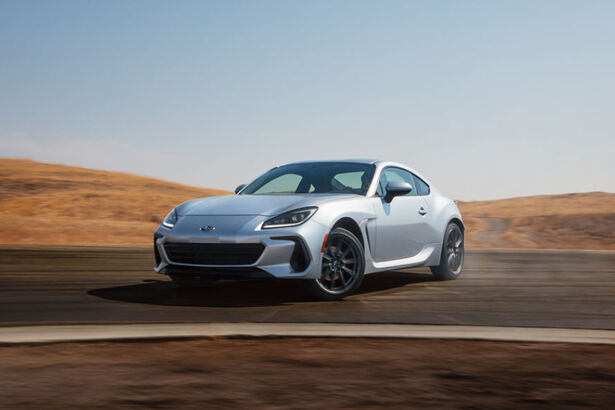 The BRZ should prove to be a tossable sports car.

"Using design elements from the Subaru Global Platform, the chassis has gained rigidity through a reinforced chassis mounting system, sub-frame architecture and other connection points," Subaru stated in its announcement. "Front lateral bending rigidity has been increased by 60 percent for the 2022 model to improve turn-in and response." So, it's not just the quickness that will change, the already great handling and steering characteristics of the first-gen BRZ should improve with the new car. 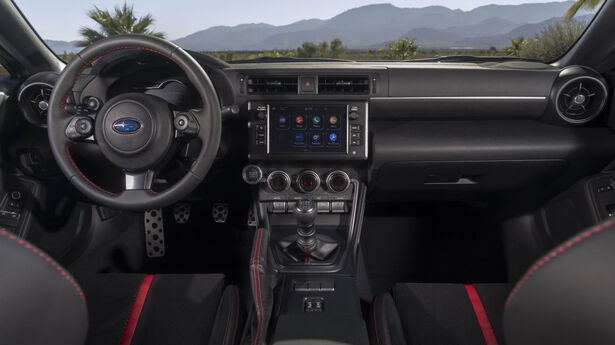 The interior looks much better than the current model, but there's still a ton of black plastic.

In terms of suspension components, the new BRZ setup is much the same. It has struts in front and a double-wishbone in the rear. There are, however, comprehensive chassis updates in the new car, and you can also upsize from the standard 17-inch wheels to 18 inches. Tire sizing carries over from the 2020 BRZ in the form of 215/45 R17 or 215/40 R18 depending on trim level. 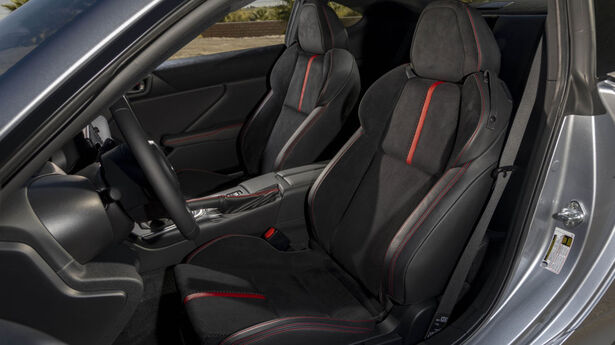 We don't have any information about the interior, but as you can see in photos here, the interior has evolved nicely. It's still very driver-focused, and it does look like the seat bolsters are more substantial all over. They also look more premium than the current model's with Alcantara suede on all seating surfaces, as well as nice red contrast trim and stitching. 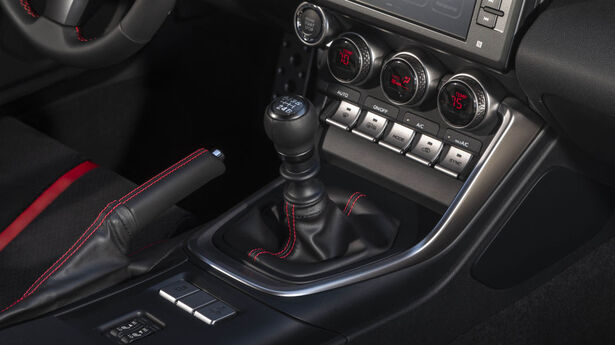 The dash and center console are still pretty basic, but they look much better than before. The double cowl look of the instrument binnacle and the center vents has been replaced by a flatter dashboard surface with rectangular center vents. The bulge in the dash in front of the front passenger is gone (thank goodness, 'cuz that was weird), replaced by a two-tier that looks a lot like a Lexus RC coupe's. 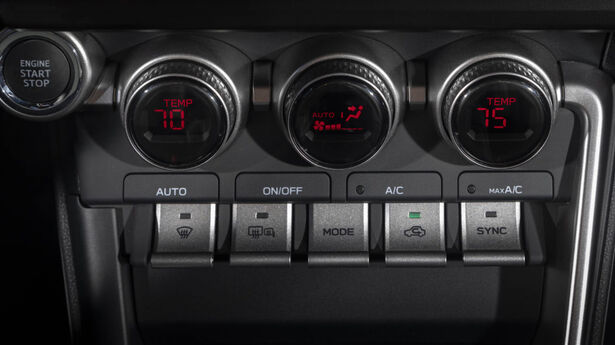 We rather like the triple dials that make up the two-zone climate controls.

The big round climate control dials look better with knurled grips and black trim versus the older silver trim. The red digital readouts on the dials looks larger than before, as well. The HVAC toggle switches are still present, but the dividers are gone. Finally, we noticed that the shifter surround shape has been changed from round to a more squared-off look, and the silver framing is gone, too. The thick-rimmed steering wheel with thumb cutouts looks surprisingly the same as the old one, but that's not a bad thing.

The BRZ might not be as daring as we had hoped in terms of style, but it's a vast improvement over the somewhat cheap-looking first-gen model. What matters most, however, is the way it drives. We're guessing it improves significantly over the 2020 BRZ's already great driving dynamics. Soon, the Toyota 86 will follow, mimicking most of what you see here. We're just thrilled to see the car gods still smiling down upon us with stick-shift, rear-wheel drive sports cars that cost less than the average price of a new car.