And it even has a manual transmission 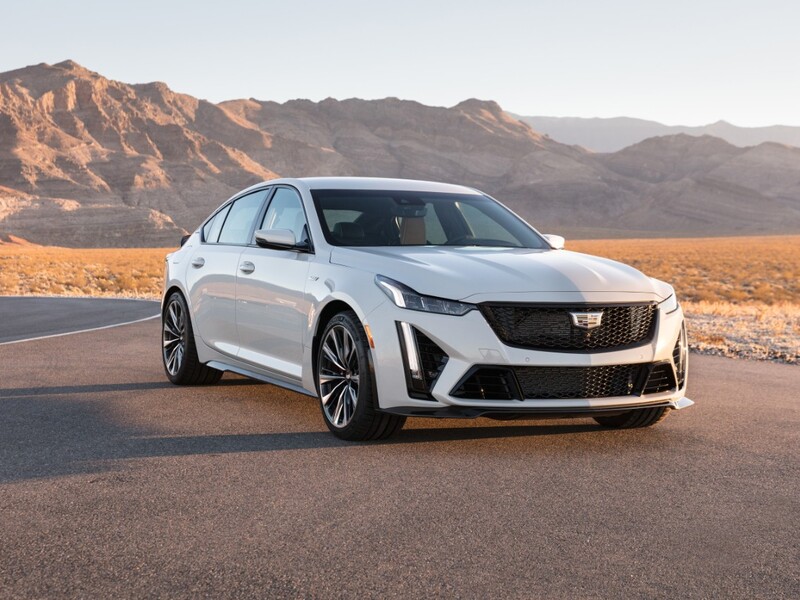 Who wants an electric SUV when you can have this.

Even though Cadillac wants to go electric soon, we love the fact that they still care about driving enthusiasts. Their latest example just might be the best in the business. Cadillac's new performance beast is on its way, and it's called the CT5-V Blackwing. While it won't have the awesome Blackwing twin-turbo V8 that's been canceled after the death of the CT6 and the Escala premium sedan, it will house a  supercharged 6.2-liter V8 with a whopping 668 horsepower and 659 lb-ft of torque. And get this... it will come with a manual transmission. Who loves us? Cadillac. 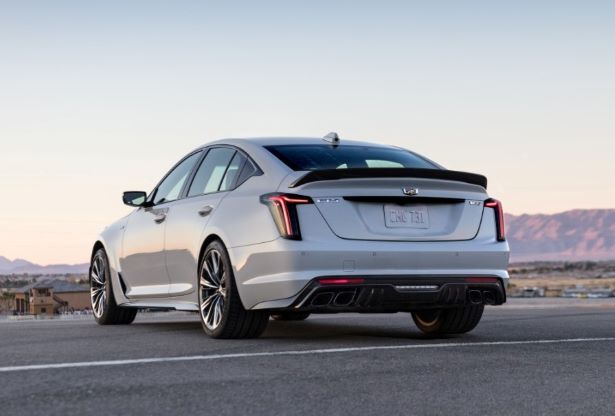 The CT5-V Blackwing will be the most powerful Caddy to date.

While the engine isn't as refined and technologically awesome as the real Blackwing V8 was, this one is at least an evolution of the now-dead CTS-V's supercharged 6.2-liter V-8, which was the most powerful Caddy engine ever. The fact that the standard transmission for the CT5-V Blackwing will be a Tremec 6-speed manual transmission driving only the rear wheels means this is a purist's sports sedan of the best kind. 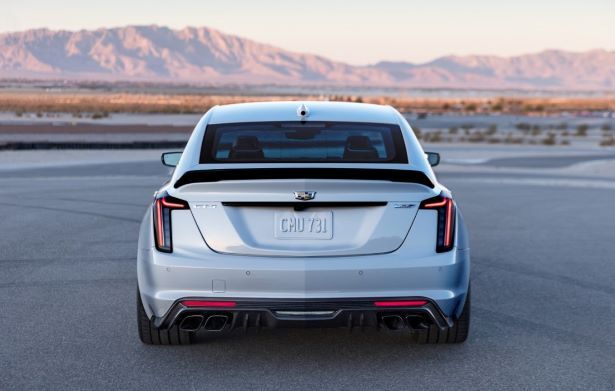 Keep in mind that the CT5-V in base trim has 360 horses and 405 lb-ft of torque from its twin-turbo V6. The V8 in the CT5-V Blackwing spits out 308 horses and 254 lb-ft more. The V6 version will hit 60 mph in about 4.6 seconds, while the Blackwing will do it in 3.7 seconds with the optional 10-speed automatic and 3.9 with the manual. Those two-tenths of a second doesn't matter to us. We'd choose the manual all day long. 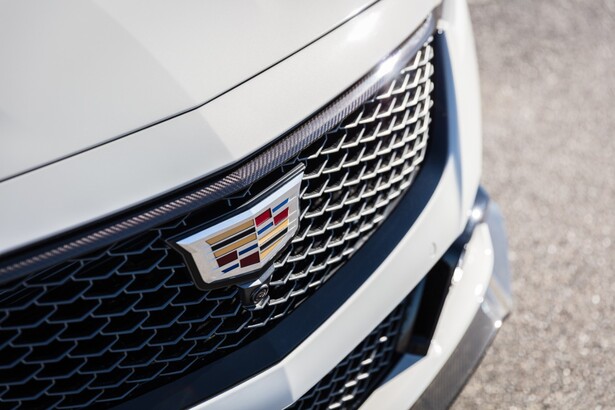 What's more, the CT5-V Blackwing isn't just quick, it's also remarkably fast at the top end. It should go in excess of 200 mph, according to Cadillac. That's faster than the BMW M5 Competition, which tops out at 190 mph. In terms of acceleration, the M5 Competition is quicker to 60 (about 3.1 seconds). But the M5 cannot be outfitted with a manual transmission, and it costs significantly more ($110,000) than the $85,000 Blackwing.

The BMW M3 is about as fast, and you can get a manual transmission. It's also cheaper than the Blackwing. But we eliminate it simply because, with the new huge kidney grilles, it's just freakin' ugly as sin, whereas the CT5-V Blackwing is quite the looker. Pay big money for a premium sports sedan, and you should want to look at it rather than turn away in horror. 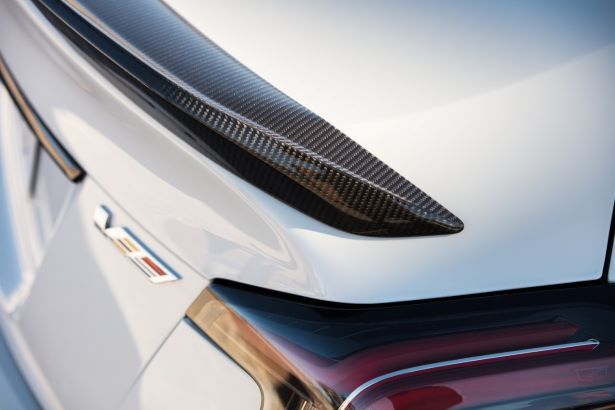 The CT5-V Blackwing gets new rear-wheel drive architecture, plus the housing for the electronically actuated limited-slip differential is lighter. The car also benefits from Cadillac's excellent Performance Traction Management (PTM) system, which controls the diff. That system also controls traction, stability, and shock dampening. Driving modes, known as V Modes, encompass Tour, Sport, Track, and a customizable My Mode. Driving details such as throttle response, gear holds, and even brake feel change between settings. Look out BMW. The CT5-V Blackwing is not messing around. 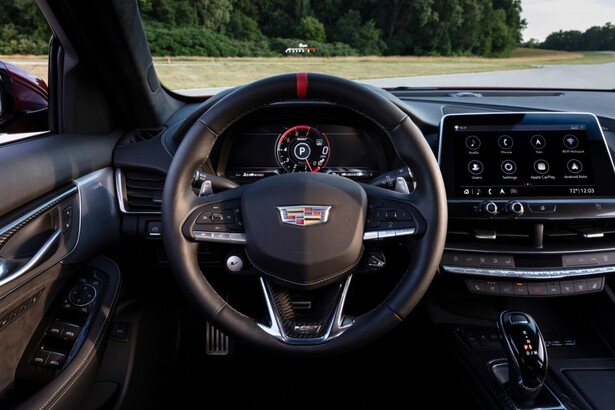 The sporty interior is one of Cadillac's best.

Additional performance components include the biggest Brembo brakes ever put on a Caddy, 15.7 inches in front, 14.7 in the back. For the first time, customers can upgrade to fancy carbon-ceramic rotors. They drop 58 pounds off the cast-iron brake rotors. The new forged aluminum wheels are 40 percent stiffer and 19 percent lighter, but you will also be able to upgrade those to lighter, stronger magnesium wheels. Special Blackwing version Michelin Pilot Sport 4S tires are standard, and they are fat: 275/35ZR19 front and 305/30ZR19 rear. 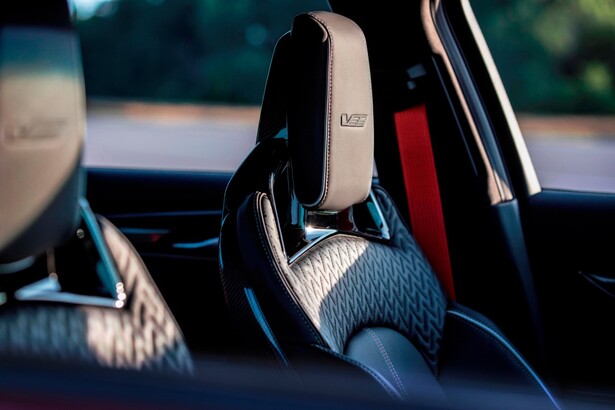 In terms of special bits, you can get the CT5-V Blackwing with a carbon-fiber track package option that adds a carbon grille header, splitter, rocker panel extensions, deck spoiler, and rear valance. And they're not just for decoration. They enhance aerodynamics, as well. There are also carbon-fiber-backed seats-which are 18-way adjustable, heated, ventilated, and massaging. The seat bolsters are even designed to make reaching the stick shift much easier, something we can totally get behind. One huge detail is the fact that designers made sure the headrest doesn't push your helmeted head forward while you're tracking. It's this level of detail that makes us believe Caddy has done something truly significant for a driver's sports sedan.

The Cadillac CT5-V Blackwing will start at $84,990 base MSRP.  All 250 pre-order units have already been spoken for, which gives us hope that people still love driver's cars.