The evolution of the behemoth species 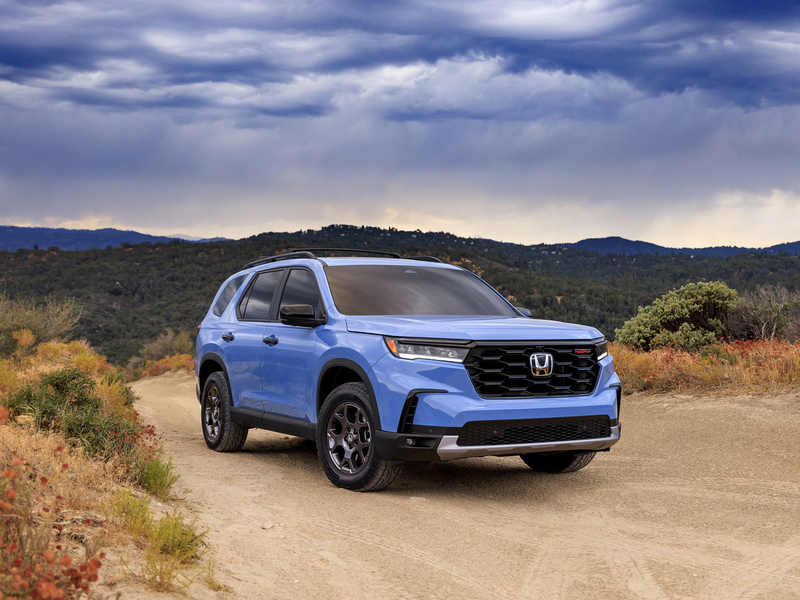 Falling in line with the Honda design language.

The Honda Pilot is everywhere, and it's hugely popular among families who need tons of space but don't want to buy a minivan. The Honda Pilot is one of the brand's most successful vehicles, and it's not hard to see why. It's huge inside, easy to drive, and very reliable. The three rows are truly usable, unlike so many other supposed three-row SUVs out there. 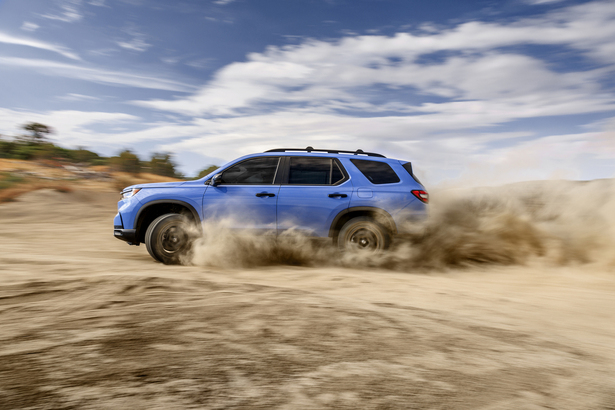 For the fourth generation vehicle, Honda has gone back to the drawing board for the styling while keeping its tremendous utility and size. The new 2023 Honda Pilot looks totally different and also adds a new trim level that should appeal to those who want to do a bit more than drive it on pavement. Here's everything we know about it.

It Goes Back to Its Boxy Roots 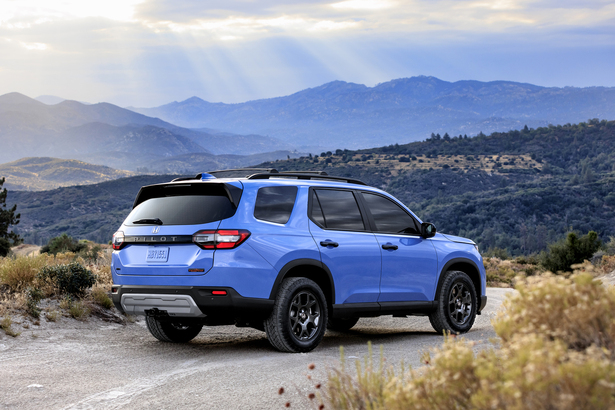 Honda can't seem to make up its mind when it comes to the Pilot's styling, but it's hard to fault them on this one because it departs from the minivan styling of the third-generation SUV. The first and second-gen Pilot were boxier, and then Honda decided to make the current one sleeker. This time, the brand goes back to the boxy look but incorporates the brand's new design language. The front end gets a large Ridgeline-like grille flanked by a triple-lens headlight cluster. The profile view is definitely boxier, and there's even a forward-sloping C-pillar that's body-colored like the first and second-gen Pilot. The rear end is probably our least favorite aspect because it kinda looks like the Subaru Ascent. 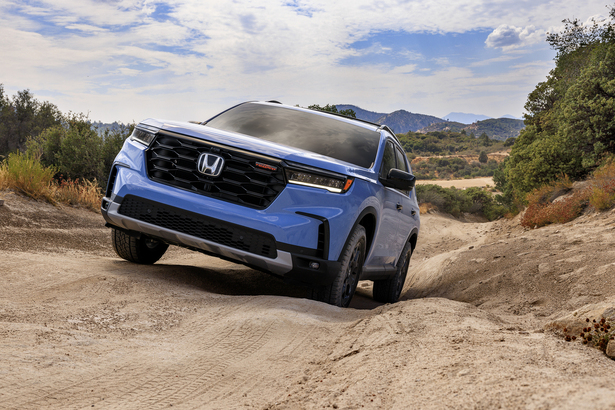 The new trim level is known as TrailSport, just like the Passport's. The new trim provide an off-road-tuned suspension with a 1-inch increase over stock, as well as improved approach and departure angles. The TrailSport also gets changes to the stabilizer bars, spring rates ,and damper valve for more ruggedness off-road. As you guessed, the tires get upgraded to Continental TerrainContact all-terrain tires on 18" wheels. There are also skid plates that cover the oil pan, transmission, and the gas tank. In terms of TrailSport appearance changes, it get gloss black trim, beefier cladding, and a new paint color known as Diffused Sky Blue Pearl paint that you see here.

An Even More Impressive Interior 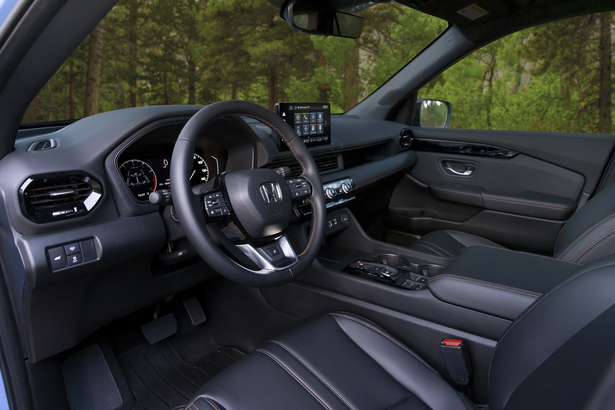 In terms of size, there are some improvements. The new Pilot's length increases by almost 3 inches, a longer wheelbase, and a new seating configuration with an updated second row for higher trim levels. It reminds us of the 2nd-generation Toyota Highlander with a fold-down middle seat that turns into a console that can also be removed completely for a walkthrough passage to row three. It effectively turns a bench seat into a Captain's Chair arrangement. That removable center seat also happens to store underneath the load floor behind row three, so you can take it with you and not cramp in on your cargo space. 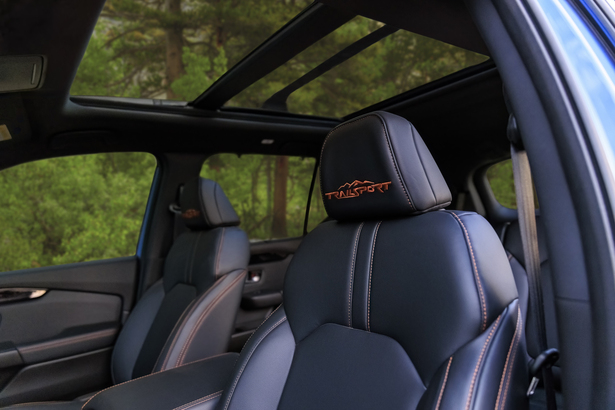 The passenger space grows and where it was needed. The 3rd-row legroom ncreases by 2.5 inches. Cargo space increases from an already large 16.5 cubic feet behind row three to a truly large 22.4 cubes. In terms of in-car tech, the Pilot gets the same infotainment options as the Civic, HR-V and CR-, all of which have been redesigned. The base Sport trim gets a 7-inch touchscreen, and the rest of the trims receive a 9-inch screen along with wireless Apple CarPlay/ Android Auto and wireless device charging. Only the Sport trim requires a connection. TrailSport trim gets a TrailWatch camera system with four exterior cameras with four different views. There's also a Trail driving mode that adds to the existing Normal, ECON, Sport, Snow, Sand and Tow modes.

The Pilot's engine gets changed to a DOHC 3.5-liter in place of the current Pilot's SOHC 3.5-liter. Output gets bumped by 5 hp to 285 while torque remains the same at 262 lb-ft. It's mated to a 10-speed automatic with paddle shifters. The TrailSport and Elite, trims get standard torque-vectoring AWD. The Pilot's chassis also delivers a better driving experience. There's no word on pricing yet, but that will be disclosed before the new Pilot starts hitting showrooms later this year.

Find a Good Deal on the Honda Pilot

Read our review of the 3rd Generation Honda Pilot, one of the best used SUVs around. 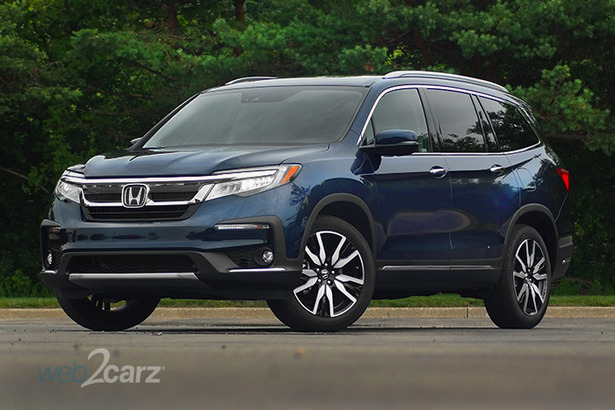