The Ford F-Series Pulls its Weight for Owners and the U.S. Economy 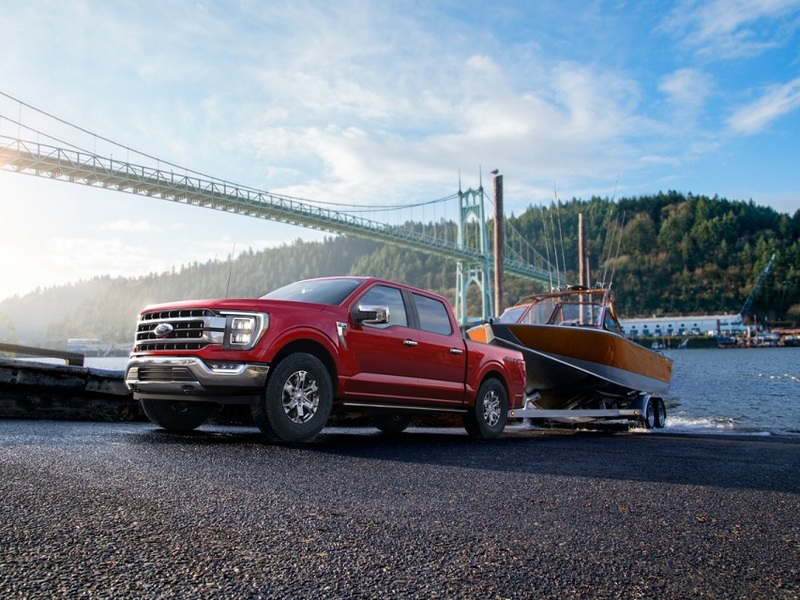 The 2021 Ford F-150 is designed around its customer's toughest demands. (images: Ford)

The Ford F-Series is the most popular vehicle on the road today and has a long history of being a top-seller. Its accolades include 'best-selling truck' for 43 years and 'America's best-selling vehicle' for 38 years. So what's the secret sauce? We joined the Ford team on a virtual meeting hosted by the Midwest Automotive Media Association to learn about the automaker's impact on the U.S. economy, the all-new 2021 Ford F-150, and its first-ever hybrid powertrain. Despite the long list of upgrades to the F-150's exterior, cabin, and capability, the redesign boiled down to one simple word - productivity.

Economic Impact of the F-Series 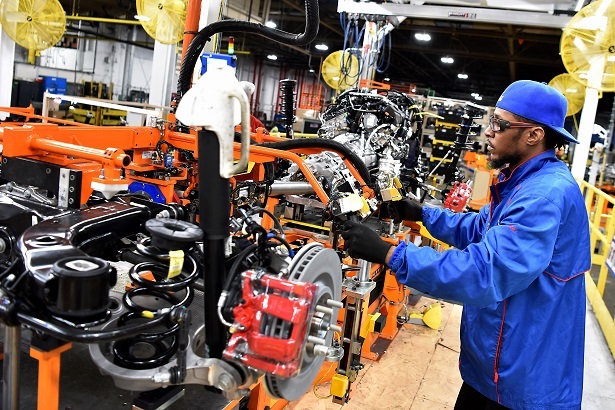 The Ford F-Series isn't just America's best-selling truck, but also the biggest automotive contributor to the country's GDP and workforce. Ford revealed a new study conducted by Boston Consulting Group that measured the impact of the automaker (and the F-Series) on the nation's economy. The results show that Ford generates close to $100 billion for the national GDP and provides 1 million jobs nationwide. The popular F-Series accounts for nearly 50% of the total GDP at $49 billion and generates more revenue than big brands including McDonald's, Nike, Coca-Cola, and Starbucks.

Ford is the top vehicle assembler in the U.S. as well as the largest employer of U.S. hourly workers. According to the BCG study, of the nearly 11 million vehicles assembled in the U.S. last year, Ford built more than any other automaker and assembled twice as many full-size pickups. Ford is also leading the pack in creating American job opportunities. Approximately 14 American jobs are supported by each direct Ford F-Series employee which totals about 500,000 jobs attributable to the F-Series alone. 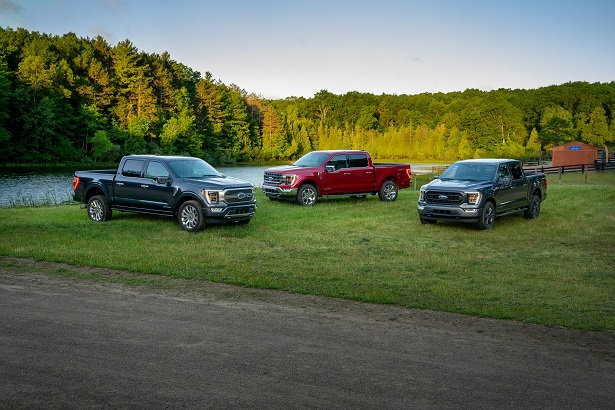 After carefully studying how F-150 owners use their trucks for work and recreation, Ford redesigned its light-duty truck to better fit their needs. As a result, the F-150 gets more brawn and brains with a stronger frame, a new hybrid engine for increased horsepower and torque, increased towing capacity, and a user-focused work surface inside and out.

The new 2021 F-150 gets subtle upgrades to its exterior for a familiar, yet fresh look. These include a more refined front fascia with a new grille and headlight design. A total of 11 unique grilles will be available on the new trucks and will be specific to the series. The F-150 also gets new sculpted doors, fenders, and box sides, along with new wheels and a new rear bumper. From a productivity standpoint, the most significant changes to the F-150's exterior include a new high-strength steel frame and high-strength military-grade aluminum-alloy body culminating in the toughest F-150 yet. 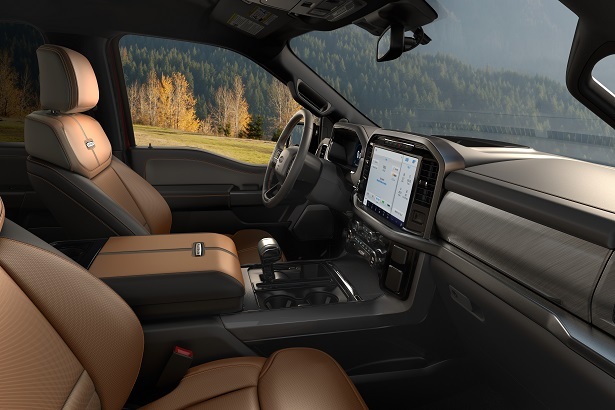 Inside, the F-150's cabin gets an overhaul with upgraded surfaces, a new instrument panel, center console, door trims, steering wheel, and seat material. The new 'Max Recline Seats' available on higher trim levels will allow for the front seats to fold flat when drivers need a rest break from a hard day's work. Interior storage space is optimized with a dual glovebox and rear underseat locking storage.

Ford's SYNC 4 infotainment system will now be standard across the lineup and is accessed through a new standard 8" screen or a larger 12" landscape screen available on higher trims. With increased processing power over the outgoing SYNC 3, the new system will be more responsive and support over-the-air updates, Wireless Apple CarPlay, and Android Auto. 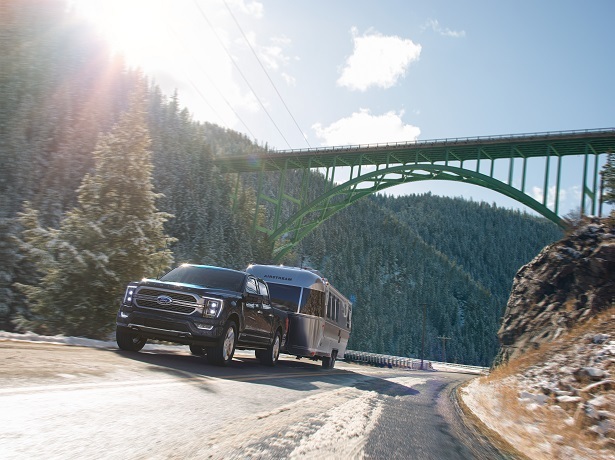 The hybrid engine uses Ford's Ecoboost V6 and adds a 35-kilowatt electric motor integrated into the transmission. The hybrid is a class-exclusive and is available across the 2021 F-150 lineup giving owners more power, torque, and towing capability. In addition to the best-in-class horsepower and torque, the hybrid has a targeted EPA estimated range of 700 miles on a tank of gas, and up to 12,700 pounds towing capacity. Going with the hybrid engine will yield the most power and towing capacity among the F-150's lineup. 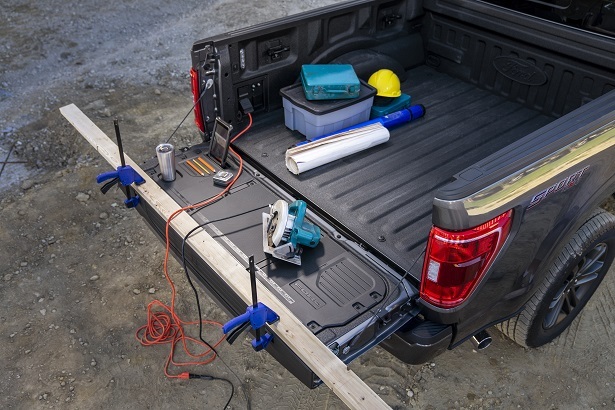 By studying F-150 customers and how they interact with their vehicles, Ford has found that a truck's value is not based solely on its horsepower and torque outputs or its tow ratings. To make the 2021 F-150 more productive for owners who spend hours working in and around their trucks, Ford added a long list of user-centric features inside and out. These include the Pro Power Onboard, a tailgate work surface, an interior work surface with a stowable shifter, and a digital productivity cluster.

The available Pro Power Onboard replaces the need for a generator at worksites, offering a 2.0-kilowatt output on the 2.7-liter EcoBoost V6 and 5.0-liter V8. The PowerBoost-equipped F-150 comes with 2.4 kilowatts of output standard or an optional 7.2 kilowatts of output. The power can be accessed through in-cabin outlets and cargo-bed mounted outlets and can be accessed even while driving. An available tailgate work surface provides a user-friendly area for contractors and home improvement enthusiasts alike. The flat surface holds integrated rulers, a mobile device holder, a cupholder, and a pencil holder. 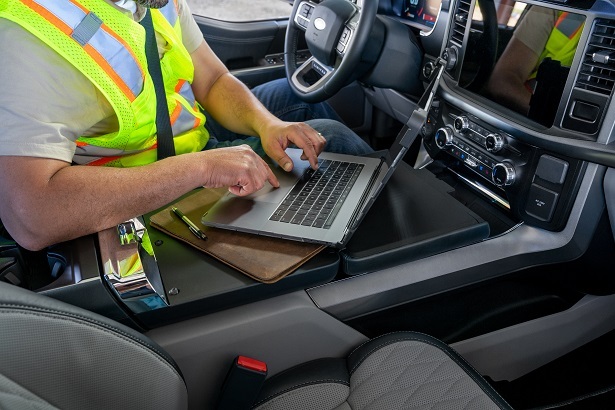 Ford makes the driver's seat just as productive as the tailgate for those who call their truck an office. The new interior work surface has a deployable area which can be used for working on a laptop, completing paperwork, or taking a lunch break. To create more space, a stowable shifter folds into the center console when the truck is in Park, freeing up the work area. Finally, the available 12" digital productivity cluster displays truck-specific graphics that respond to the F-150's selectable drive modes and provide off-road data and turn-by-turn navigation.

The 2021 F-150 will arrive in dealerships this fall and will be offered in  XL, XLT, LARIAT, King Ranch, Platinum, and Limited trims. The XL trim starts at $28,940 MSRP, and the hybrid engine will set you back an additional $2,500. All F-150 models are built in the U.S. at Ford’s Dearborn Truck Plant in Dearborn, Michigan, and Kansas City Assembly Plant in Claycomo, Missouri.