The 2022 Nissan Frontier Is Bold, Fresh, and All-New, Kinda. 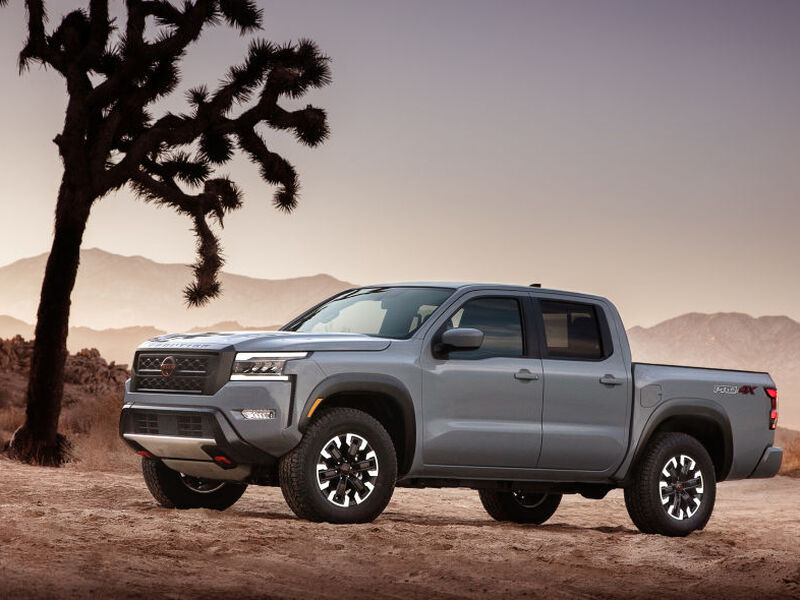 From ugly duckling to handsome swan in a mere 17 years.

It seems like we've been waiting for a Nissan Frontier redesign forever, and that's because it hasn't really been touched since 2005. That's Methuselah-like in the automotive industry, and even though the Frontier was still selling well, it was only being purchased because it was affordable. Hell, the interior looked like it was still stuck in the '90s. Now, the covers have been pulled off the 2022 Frontier, and it looks like Nissan did its homework. 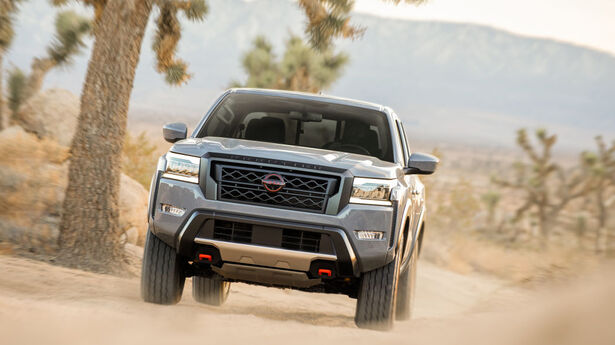 The Frontier finally looks like it belongs in the 21st century.

The first thing you notice is that the Frontier looks like a contender in the mid-size truck segment. It borrows the edgy look from the redesigned Armada and looks even more aggressive than its competitors, the Chevy Colorado, Toyota Tacoma, and the Ford Ranger. Whereas the outgoing truck looks a little rounded and soft, the new Frontier is blocky and aggressive.

There's an intricate large framed mesh grille up front and a split LED signature around the quad-beamed headlights. Long vertical vents at the outer edges and the squared-off hoodline add presence. In the photos, we see the Pro-4X off-road trim that adds red emblems, tow hooks, and some nice skid plates. The front side windows borrow from the Ford F-150, a cutout styling element at the bottom of the window frame. 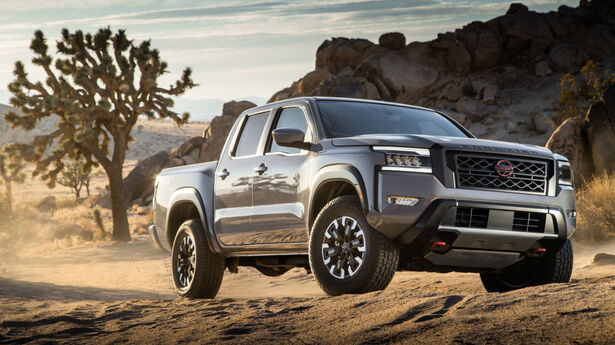 The side view looks a lot like the Toyota Tacoma but a tad boxier. The Frontier is well-proportioned, and the pronounced front and rear shoulders give it a more rugged look, much improved over the old one. It definitely has the bold looks to be competitive in the segment, and its truck-ish presence is what buyers want (part of why the Honda Ridgeline was recently updated). Although the new Frontier looks bigger, it really doesn't grow in terms of capacity, the nose adds about five inches. The idea was to give the Frontier a more intimidating look, and that meant upsizing the front end. 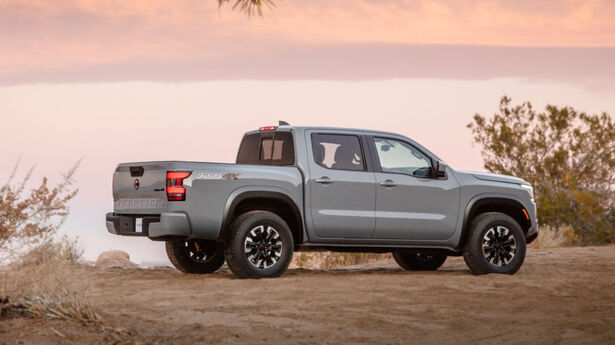 Nissan will offer the new Frontier with cab options that provide more interior space, thankfully. There will be a long-wheelbase version that adds a whopping 13.8 inches between the front and rear wheels. You can also get a bigger Crew Cab that's more spacious than the base King Cab. Nissan also gave the new Frontier an updated hydraulic steering system for improved response, which should provide the Frontier with improved driving dynamics. 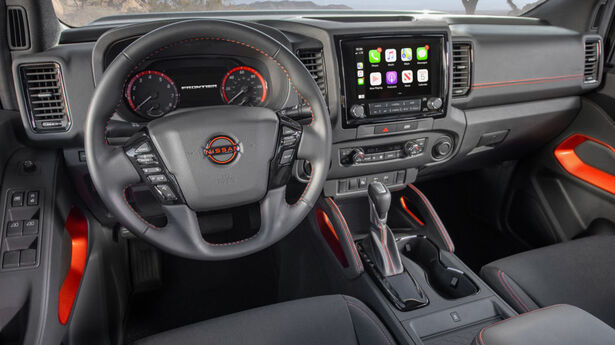 Gone is the Jurassic-era interior of the old truck. The new one is pretty sweet, grab handles and all.

Whereas the old interior looked like it was stuck in a '90s time warp, the new Frontier's is as attractive and well-designed as any of its competitors. Of course, this Pro-4X is fancier than the base truck's, but the overall look is eons better than the outgoing version's. The Frontier comes standard with an 8-inch touchscreen with Apple CarPlay and Android Auto. You can also upsize to 9 inches, and there's also a 7-inch screen between the large analog gauges.

Options include Wi-Fi and a Qi-Wireless phone charger. The Frontier also comes with USB-A and USB-C charging ports, two 110-volt outlets, and two 12-volt outlets. One huge plus in the cabin is the standard use of Nissan's excellent Zero Gravity seats. Pro-4X trim adds special seat trim, contrast stitching throughout the cabin, and contrast trim in the door handles and center console grab handles. 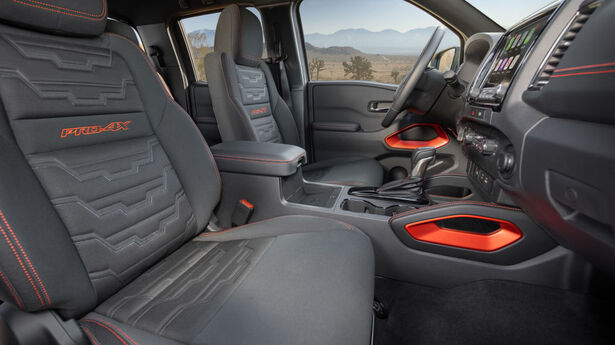 A couple of big things carry over from the old truck. First of all, the new (for 2020) 3.8-liter V6 debuted as the old Frontier was sun-setting in its final year. The engine makes 310 horsepower and 281 lb-ft of torque. It's mated to a nine-speed automatic transmission (no manual, sadly), and there's no four-cylinder engine due to lack of demand. In its base configuration, the Frontier is rear-wheel drive, and four-wheel drive is optional. There's a new trailer sway control system, and max towing capacity is 6,720 pounds. While that's not exactly class-leading, it should be sufficient for most owners. 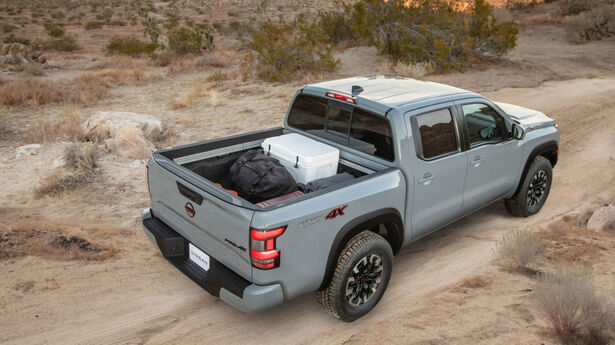 The 2022 Frontier looks nothing like its predecessor, and that's a good thing.

New safety equipment comes into the fray such as automatic emergency braking front/rear, blind-spot warning, rear cross-traffic alert, lane departure warning, and automatic high beams. You can opt for Adaptive cruise control. The Frontier's 360-degree camera has an Off-Road Mode that allows you to see where you're truck is relative to its close surroundings. It operates under 6 mph and when 4-Low is engaged.

There's no word on pricing, and photos of the base Frontier were not made public. Nissan says the 2022 Frontier will go on sale this summer, and pricing will be available just prior to its release. We're excited to see what it's like to drive, and we're guessing the new Frontier will have no problem outselling its bigger brother, the Titan.

The current Nissan Frontier is still quite popular even though it's dated. Read about our experience driving it off-road.

Why The Nissan Frontier is Still a Smart Choice 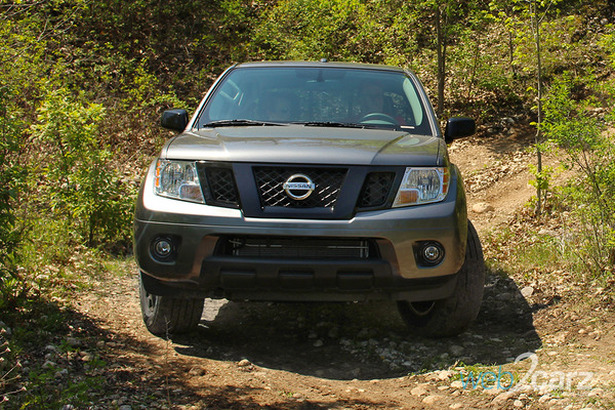